Why do bike tires suffer from frequent punctures whereas car tires don't?

Why do bicycle tires suffer from frequent punctures whereas car tires do not?

The main reason is that bicycle tyres are much, much thinner than car tyres. A little tetrahedron of broken glass or a drawing pin that would puncture both tyre and tube on a bicycle won't trouble a car's tyre in the slightest.

A secondary reason is that bicycle tyres with tubes have additional ways to suffer punctures: an under-inflated tyre is susceptible to pinch flats.

It's pretty much as simple as that.

An unaddressed reason is speed-induced wind and the shape of modern roads.

Motor vehicles travel in a lane, and a roadway is generally two or more lanes in opposite directions.

As such, these two lanes meet at the centerline, which tracks the highest point on the sealed road surface. For drainage, the road is not flat - all roads are intended to have some minor slope to assist rainwater to flow off. Also, some corners are cambered, so that the shorter inside of the corner is lower than the longer outer edge.

Bringing it back to the question - we cyclists do not generally ride the centerline. I ride on the outside of the road, which is where road detritus gets washed by rainwater, and debris also gets pushed here by the passage of cars. You can see a similar effect on a flat road just before a traffic island - here's an extreme example, which is mostly gravel and organic leaf matter.... 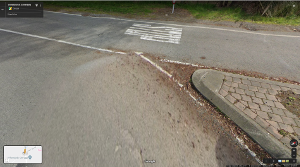 ...but I'd expect to find metal wire shards in there and possibly fragments of glass and plastic. Nails, screws, and staples are normal road rubbish too. Basically anything that can be "swept" by the passage of vehicles travelling at 50 or 80 or 100 km/h which creates a respectable breeze to sweep the lane clear and push the jank downhill to the sides.

The side (or shoulder) of the road is where we end up riding. All of these items lie on the road surface, and get concentrated on the sides, and this contributes to punctures along with the other points raised in other answers.

As someone who's had three car tire punctures in 200'000 km, and one bike puncture in maybe 20'000 km, I'd say an individual result is simply not statistically significant.

With a car, if you do mostly highway and city driving, punctures are rare. If you go on mountain or country roads, of frequently visit construction sites, railroad depots, junkyards and the like, you'd better have a spare tire ready. The same is true for bicycles: going all-terrain is not the same as riding on dedicated bike lanes.

Other than that, causes of car and bike punctures actually have not that much of overlap. Small glass shards which damage a bike tire are not a threat to cars, and sharp rocks / metal scraps which are dangerous for a car tire can be easily avoided on a bike.

There are puncture-resistant versions of popular road bike tires. I've got some on my bike from a well-known brand as I bought it and I haven't had a single puncture yet. For the same distance I would have expected 3 or 4 punctures on the tires I used previously.

However, this comes at a cost - higher rolling resistance. Using the site linked below, I see a 9.3-watt power loss versus the race tires of the same brand at 8.3 bar pressure. At lower pressures, the power loss is higher.

I'll probably get different tires when these wear out.

Conclusion: it's possible to make bike tires more puncture resistant, but at a cost. It's much easier to change the tubes on a bicycle than to change the tires on a car, so the trade-off for bicycles is different: people prefer to go faster with the occasional additional puncture.

Site that has a Rolling Resistance Test Result comparison option

The reason for bike tires suffering from frequent punctures is simple. In order to have light weight and low rolling resistance, bicycle tires need to be about 30mm in diameter. Car tires can easily have over 8 millimeters of tread, and that's just the tread not the structural parts below it. A tiny shard of glass or a small sharp rock cannot penetrate such a tread and structural parts.

In contrast, if a bicycle tire around ~30mm in diameter had 8mm rubber, the air pocket diameter would be only 14mm. Such a tire would be heavy, have lots of rolling resistance and would not differ much from solid rubber tire.

Some bicycle tires are advertised to be "puncture protected". Foolish riders with the money believe this is a good thing, and has led to disappearance of reasonable non-puncture-protected tires from the market. Fortunately, in the high performance tires segment, the puncture protection is just a thin belt of Kevlar, that protects from punctures no more than a bulletproof vest protects from a sharp knife. The thin Kevlar belt does not add much rolling resistance, fortunately.

Thus, by selecting tires with less puncture protection, the energy efficiency savings are about hundredfold greater than the time to repair punctures. As puncture takes 5-10 minutes to repair, in a typical distance it won't affect much your arrival time to your destination.

Of course, someone could protest that repairing punctures takes skill. This skill is useful to learn, because no bicycle tire is protected from punctures as well as a car tire is, unless the bicycle tire has more rubber than air, and therefore is more similar to a solid rubber tire than a pneumatic tire.

Not the answer you're looking for? Browse other questions tagged puncture bike-vs-car or ask your own question.

20
How does a bike's weight affect the overall experience of owning it?

12
Which puncture-resistant tires?
9
Is this a puncture protection thing?
32
Broken glass on the bicycle path, what to do?
5
Tire Continually going flat
12
Tube sealant vs. tire liners vs. puncture-resistant tires -- which best prevents flats?
15
How to stop dealing with flat tires?
7
When does a Marathon Plus tire (not) need replacing?
2
Are tubeless tires the solution to frequent flat tires?
0
Keep getting flat with road bike tires
2
Puncture immediately after inflating