Which side should I pass other cyclists on a UK cycle path?

I'm new to using cycle paths and seem to get dirty looks for riding on the left.

When driving along my usual commute this morning I saw others riding on the right and therefore passing to the left of each other.

Surely it's the same as driving? I'm also sure that the give-way markings when crossing roads are on the left.

Edit For clarity, I am using a single off-road cycle-path as opposed to a cycle-lane. 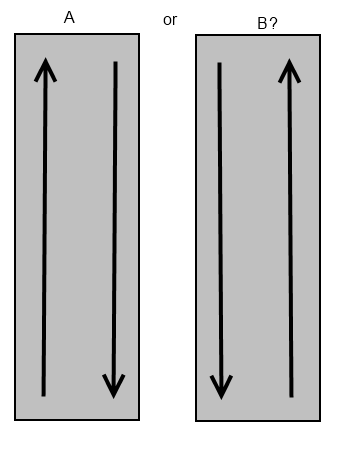 Of course you keep left, overtake on the right and queue like a good British person at junctions!

However, there are no rules. In 2006 British Waterways, concerned at the popularity and over-crowding problems on tow-paths did a consultation to work out if they needed a 'keep left' policy. It was deemed that such a move would be unpopular and not adhered to (and certainly not policed). Therefore, if there is no keep left idea then overtaking on the right cannot be deemed to be against any code.

Most cyclists over the age of five seem to appreciate the 'keep left/overtake on the right' idea, however there are some scenarios where this goes out the window in deference to safety. Going over Kingston Upon Thames Bridge the cycle lane is two-way, but you would be a brave cyclist to stick to 'keep left' when joining the bridge to go south - cyclists heading north are wanting to join the main highway and are crossing past your path. Going on the right is the expected norm at that particular point and, with it, overtaking on the left...

In almost all situations, it is easiest to apply the British road standard (keep left: A), overtaking to the right of the slower user. However the following reasons change this in situations other than two cyclists passing in opposite directions:

The assumption of other's knowledge of standard roadway rules is also affected by:

Therefore, it is easy and always best practice to slow down and signal (or call out 'passing on your left/right') to avoid collisions, crashes and dirty looks. This also works even on the rare cyclepaths with lane and direction markings.

Remember, just as cyclists come off worst in a road collision because everything else is bigger, everything else on a cyclepath (pedestrians, buggies, prams, fishermen, jakeys, cats) come off worse as they are smaller. Don't become the arse you're trying to avoid on the roadway.

I've checked the Highway Code, and Rule 160 seems to apply universally (I can't see anything in the Bicyclists section): "Once moving you should keep to the left, unless road signs or markings indicate otherwise." I have experienced a lot of dangerous situations recently on our local mixed-use cycle path, with oncoming cyclists on the wrong side (their right) who leave it dangerously late to move out of the way. Today a male cyclist ahead of me was riding on the wrong side (his right) and the young boy behind him was weaving around. Despite repeated tings and requests of "Can you move to the left, please?" from me, the adult refused to budge until the very last minute. His bad example was putting that boy in danger.

In the US most "aware" cyclists treat a path as a road, more or less -- moving to the right to allow traffic (opposing or same direction) to pass, moving to the left (and call out "On your left!") when passing traffic in the same direction. (Of course, you do everything backwards in the UK)

When on a relatively narrow path, however, with light traffic, there's a tendency to "cruise" more or less in the middle of the lane, though of course being aware of traffic approaching from either direction & being prepared to move over.

When on a wide path, one rider finds himself nearer to the "wrong" side as he encounters an opposing rider similarly on the "wrong" side, it wouldn't be too unusual to pass without switching sides. It can be confusing, though, so I generally try to stay to the "proper" side to at least a little degree to remove ambiguity.

Common sense dictates that you should use a dedicated cycle path the same way you use a road: Why would you do things differently? On a shared use path alongside a road the 'face oncoming traffic' idea makes perfect sense, but since there are no actual rules it is unwise to expect other people on the path to behave rationally whether they are on a bike or on foot. A good rule of thumb when encountering people going in the opposite direction is to assume that the other person is either stupid or selfish or both and go slow enough to stop if you have to.

I think the "On your right" call is a bad idea because you can't assume the other person knows what you mean. He may think you're asking him to move to his right. If I'm about to go past someone I ring my bell and look for some indication that they have heard me then pass on whichever side has more room. If they ignore the bell you'll just have to get close enough to speak to them and ask them to let you by.

I don't think cycle paths are one-way in the UK unless explicitly stated (but I've never seen a direction sign). There are sometimes cycle paths on both sides of a road and I tend to choose the side with the best surface.

Generally speaking the genuine separated cycle paths that I use regularly (as opposed to lanes on the side of roads) are treated as if they were roads, i.e. keep left.

(Warning, contains several sweeping generalisations.) The thing to bear in mind, though, is that, cycle paths tend to have a higher proportion of cyclists who perhaps have less roadcraft than on those on the roads, so perhaps are just dawdling and ambling and being less concerned with getting from A to B as fast as possible. (The cyclists who want to get somewhere quickly are probably on the roads as in most situations that is the more direct option, cycle paths tend to be circuitous diversions.)

One common protocol one overtaking is to call forward "passing on your right" (or left) to warn, making it clear your intention. Are the dirty looks as much because you hadn't been seen as that you were on the left?

I keep to the left, as do the majority of other cyclists that I come across on cycle paths, with no problem. However, I have also come across a few "frosty" pedestrians using the paths, coming at me from the opposite direction, sticking to their right, grumbling that I should be cycling on the right. Can't win!

I have been cycling on the most convenient side till I get to a safe crossing point...there are separated paths on both sides of the main road. I ride on the left of the path. I was shouted at by other cyclist saying you should be on the left meaning the other side of the road. I just yelled back I am on the left. There are no signs anywhere to say what you should do

I am surprised that a civilised country has such ambiguity as to which side to pass. The Government has surely been asleep. We keep left when walking on the pavement because UK Highway Code para 1 says "...avoid being next to the kerb with your back to the (adjacent) traffic....". Surely walking and cycling anywhere should follow the "keep left" convention in the UK, or "walk as you drive" in any other country.
Edit To Criggie 17 - Each pavement is for walking in both directions with the pedestrians nearest to the kerb facing adjacent traffic, so they can see what is coming (e.g. a car about to mount the pavement). Cyclists would follow the same convention where they share a pavement with pedestrians.

Not the answer you're looking for? Browse other questions tagged commuter uk etiquette or ask your own question.

31
Safely overtaking pedestrians
17
In shared bicycle/pedestrian facilities next to a road, do I obey the pedestrian or the vehicle traffic control devices?
21
Passing cars on the right, and later merging into their lane
2
What is different about cycling in London?
4
En masse bicycle commuting
4
Am I required as a biker to use the bike lane on the right side of the road?
8
Motorists misjudge bicycle speed
3
Can e-bikes speed up my commute? Which class?
1
I generally commute along four-lane 30 mph [50 km/h] main streets. Is this wise?