In front of my gym there is front wheel bike stand that means a regular D lock will not be able to reach from the stand to the frame. 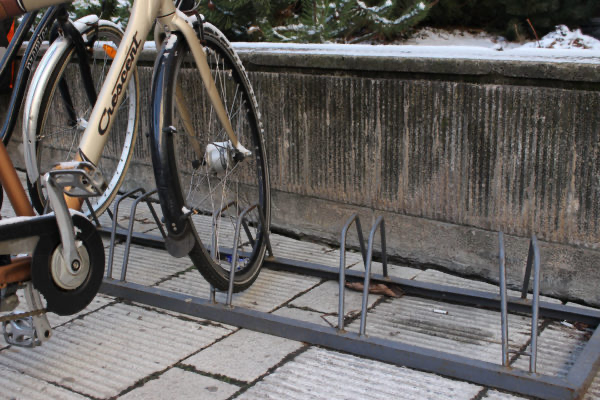 Around the corner is some Sheffield style locks but they are out of the view of the gym - meaning easier for criminals.

I am wondering what is the best approach for locking in a situation like this.

Should I invest in a long chain as a second lock to reach the frame.

Would a thin cable be suitable?

Is it better to go with a Sheffield even if it is not in front of building.

The same racks were installed "temporarily" at my local station at the beginning of the year. This is somewhere where a bike with only a cable lock is unlikely to last a week of commuting before being stolen.

It's often possible to put your back wheel in these racks, being careful of the rear derailleur (you may need to select a very high gear). Then a long D-lock can reach to the chainstay, possibly even through the wheel to the opposite chainstay. My kryptonite series 2 won't go through the wheel as well, but my masterlock will. I also use a cable to the front wheel. I considered using 2 D-locks, one locking the wheel to the rack, and the other locking the frame to the first, but didn't do it in the end.

Putting the back wheel in makes things a little awkward for other users - but so does overlapping handlebars when every space has a bike parked forwards. So try not to park right next to someone.

I think this asks for a two locks system.

When the stand gets full it gets hard to get near the front wheel, so think about how you place your lock, so you can undo it even when there are other bikes in the way.

I use a cable lock which has the lock build in, my best friend uses a cable with loops on both ends. With that cable, she can feed one end through the loop on the other end, and then she can use her D-lock on the frame, one wheel and the loop of the cable.

Having two different locks make a thief look for an other bike with only one lock, especially when the other bikes look to be as good or better than yours. It has saved me a bike several times, as most bike thieves are specialized in one kind of lock only, or only carry the tools for one type of lock only. A cheap extra lock was left on the bike while the more expensive 'main' lock was broken.

If you're leaving the bike only for a short period of time, be a rebel and use a nearby streetsign instead of the front wheel bike stand. A mini U-lock reliably makes stealing the bike extremely difficult when locked to a streetsign pole.

However, I once made the mistake of storing a beater bike semi-permanently locked on a streetsign pole. It stayed there for a month. Then it disappeared after some street work (renewal of pavement) was done in the place where I had it locked. I tried to find it and found it near a garbage site hundred meters away from the streetsign. A crank was bent and a brake braze-on was cracked. I suppose the pavement layers though it was an abandoned bike, removed the streetsign from the pole, raised the bike on top of the pole and dropped it on the ground.

So, if storing a beater bike for a long amount of time outdoors, your safety is in numbers: store it in a place where there are lots of bikes.

Streetsign poles are ubiquitous. You can find one anywhere.

In some cases, and I think also in this one, it's possible to park the bike forwards but anyway with the rear wheel in the stand, by lifting the front wheel up onto the wall. This has the advantages that you can easily access the lock even when other bikes are on both sides, the handle bars are out of the way of the others, and the derailleur is tilted forwards by the wheelie-position, so it won't clash into the bars of the bike stand.

In my local area unfortunately most bike stands are like these (better stands are very rare).

What I usually do is lift the front wheel over the stand and turn the handlebar sideways, so front wheel is in on the other side of the stand and bike frame is right above stand. Then I lock the stand and frame with chain lock (D lock might work if it is particularly large one).

It is a bit of an asshole move (it makes it harder for people to park their bikes on both sides) but I prefer it for security purposes.

If there is not enough room on the other side of the stand, I just use the street pole method that other answer suggested.

You could get a modern GPS tracker and hide id somewhere on the bike.

If you don't want to opt for some other bike stand (like street signs), you have two options for locks that can help:

There is a limit to what locks can do though: These bike stands are rather weak, they are not made of hardened lock steel. A thief can easily destroy the stand itself with a bolt cutter or angle grinder. So, if you park a top end bike with top end locks in one of these, you may find that the bike disappears anyways.

52
Locking your bike in public areas
6
U-lock stuck on a bike
3
How to clean a combination bike lock?
1
Key Stuck in bike lock!
19
How do you lock up your bike trailer?
3
Are U-lock “wheel extenders” sold separately?
3
Lock jammed on bike
3
How to lock up a bike with a rear wheel lock?
1
Recommendation for easily breakable bike lock