My child seems to have difficulties riding bike - would different tires help?

My son is 6 years old, weighs about 20kg himself. The bike we have for him is this Merida Matts J20 which weighs about 13kg.

His riding skills are fine but I get the feeling he's not comfortable on the bike. He often raises himself from the seat and rarely rides in a straight line, which frequently leads to minor accidents.

We're not going fast - about 10km/h average - but it seems he still needs a lot of effort to keep going. The bicycle just doesn't seem to have nearly as much inertia as everyone else. This results in him standing up to deliver more power to the pedals and the aforementioned swerving when going too slow.

And sure, the mass and its distribution is definitely a factor here; as well as him being easily distracted and not paying full attention to the road, but... feels like it should still be better than it is.

I've tried spinning the wheels but they seem to be moving freely (although the rear wheel does slow down a bit faster than I would expect, but perhaps that's normal). The tire pressure also seems normal, but I'll check tomorrow with a meter.

I'm wondering if perhaps tires could be a significant factor? They have a large protector like for off-road usage and we're riding almost exclusively on paved sidewalks: 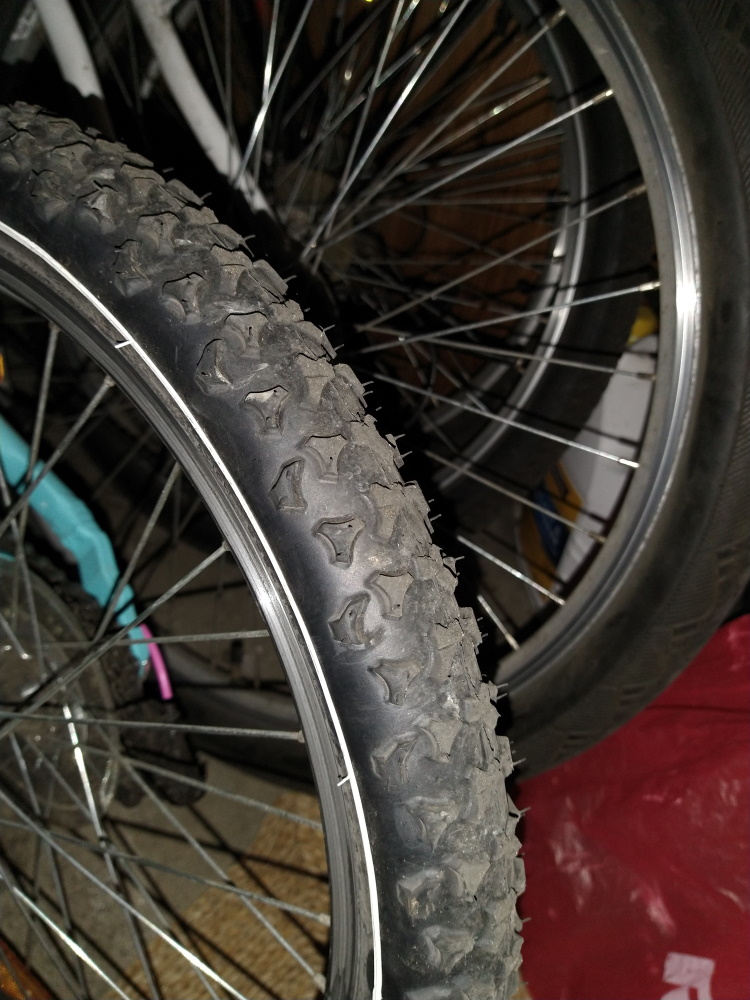 Would the bike handle better with smoother tires? Are there any other tips you might share that could help? Or is this just par for the course with 6 year olds?

I increased the tire pressure to 3.5 bar (was below 2) and raised the seat by a few cm. This seems to have made a significant difference and he is riding better now. I also checked with a LBS that the rear wheel was turning normally. He still likes to raise himself from the seat but is now riding with less swerving and seems to require less effort. Here's a picture, maybe there's something else that can be gleaned: 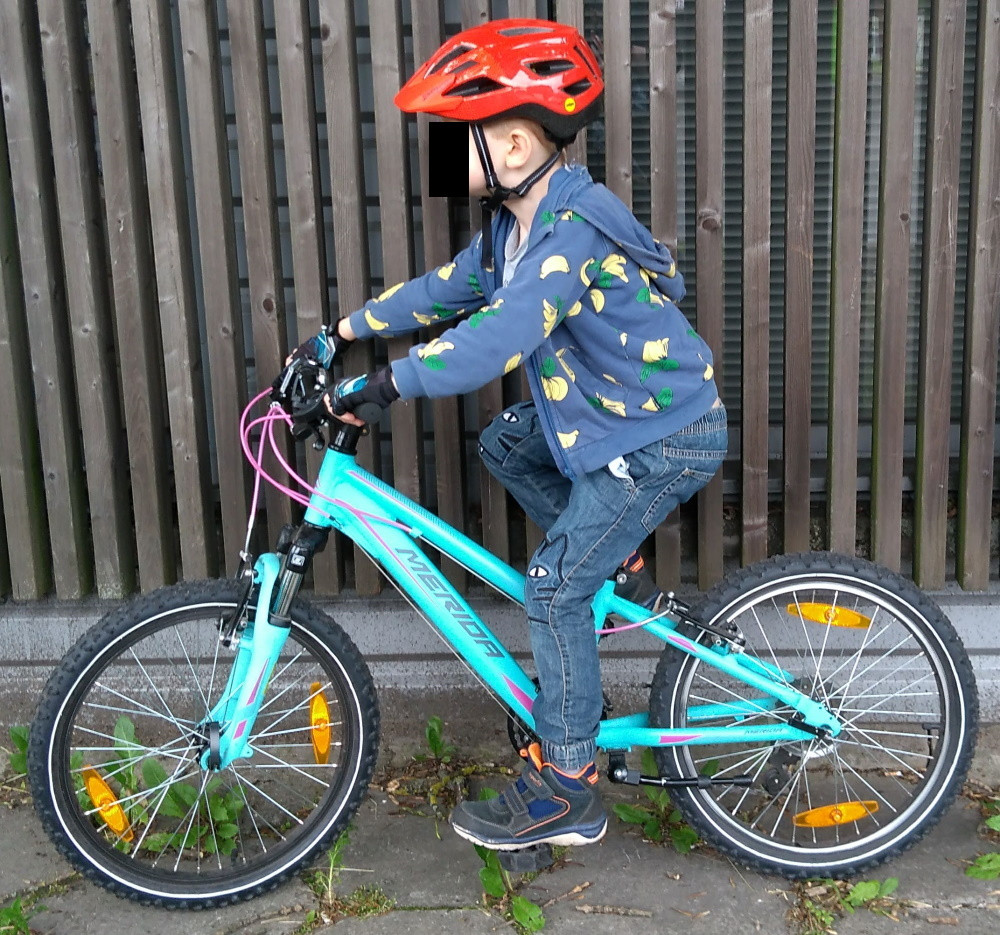 Not a helpful answer, but I would definitely find a lighter bike. In the UK, Frog and Isla are popular makes for light bikes. I would say a 20" wheel is OK for a 5-6 year old.

A single-speed Frog 52 (20" wheels, 10" frame) weighs under 8kg. Make sure the saddle is high enough, and raise it if he looks uncomfortable.

Both my children had Frog bikes and did fine. We bought ours second hand. They are very expensive, but maintain their value, and we sold both of ours for a profit when both children had outgrown them.

I doubt tyres will make any difference.

I see in the specs that this bike has 20 inch tyres. That's a very big bike for a kid who is only 6 years old.

I'm guessing you have the saddle right down to help him get on it? That could be another indication of a bike too big for the rider.

As a start, I'd suggest getting him to test-ride another bike. Someone else's would be ideal and there's no cost. Perhaps ask another parent at school or someone else you know ?

You can always put the bigger bike away for a few years until he grows into it.

From your update it looks like you did all the right things. In the photo, and after your tweaks, the bike looks to be correctly sized, he has a nice upright position and his elbows are slightly bent which is ideal. The saddle height looks good as well. Good job!!

As he gets more comfortable riding you might be able to raise the saddle ever so slightly to get a little more power, but that is more of an adult/advanced saddle position and it is better to be a tad too low than a tad too high as the latter can stress connective tissue more. The rule of thumb is that you rotate the pedal away from you (the crank should follow the angle of the seat tube), and raise the saddle until your knee locks out (I.e., fully extended leg) when your heel is on the pedal. This gives you a slight bend in the knee when the ball of the foot is on the pedal. Children often ride on the middle of their foot so this rule of thumb may not always work as intended.

Beyond that I would not consider a new bike (as suggested elsewhere). The bike looks fine, just ride what you have and have fun.

Raising out of the saddle can be an indicator of a number of things:

None of these are mutually exclusive so it could be a combination. I would be careful not to over interpret this as an issue as it has been my experience that some of this is just growing pains associated with learning to ride a bike and when to do what. Getting the hang of gear selection can be a big one, my eldest (9 years) still refuses to ride in any gear but the hardest, even up hills. So she struggles with her stubbornness.

In general pedaling out of the saddle is more powerful but more fatiguing. It can be useful to take a closer look why the child is looking for more power.

Not the answer you're looking for? Browse other questions tagged tire children or ask your own question.

26
How bad is switching derailleur gears under load?