I am having trouble adjusting the shifting on my Campagnolo Super Record rear derailleur. I have set the high and low limit.

I think the main problem now is that the jockey wheels are too far away from the cassette (around 1cm when it should be 5mm). I tried to do this with the H-Screw.

However, when I turn the H-Screw... Absolutely nothing happens. Nothing moves, I turned the screw until it cam out, put it back in, not a single change.

So my question is: How is the H-Screw supposed to work? Is there a spring or something that I may be missing?

In this photo, the H-Screw is fully extended: 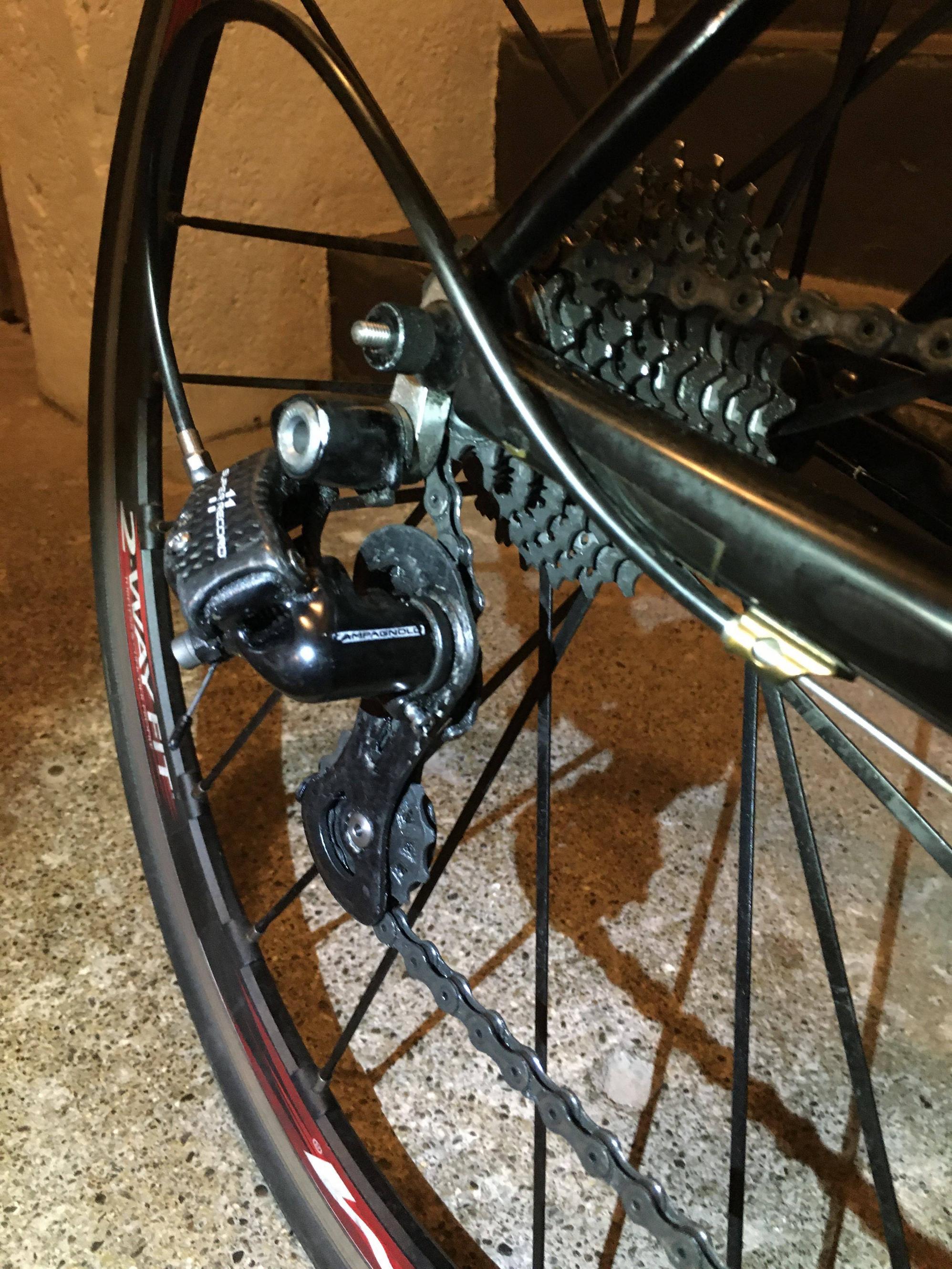 In this photo, the H-Screw is fully inserted: 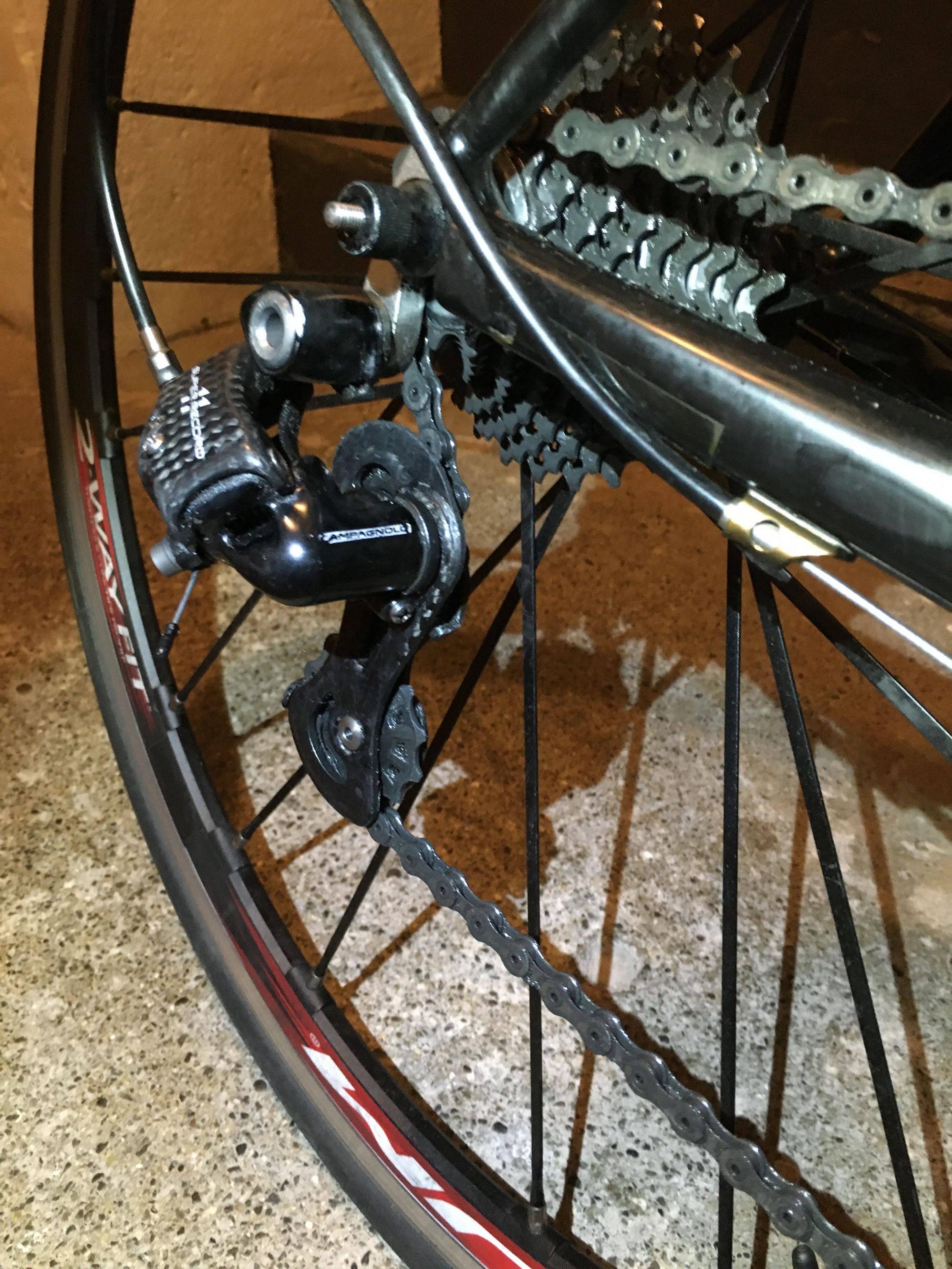 Here is the back view: 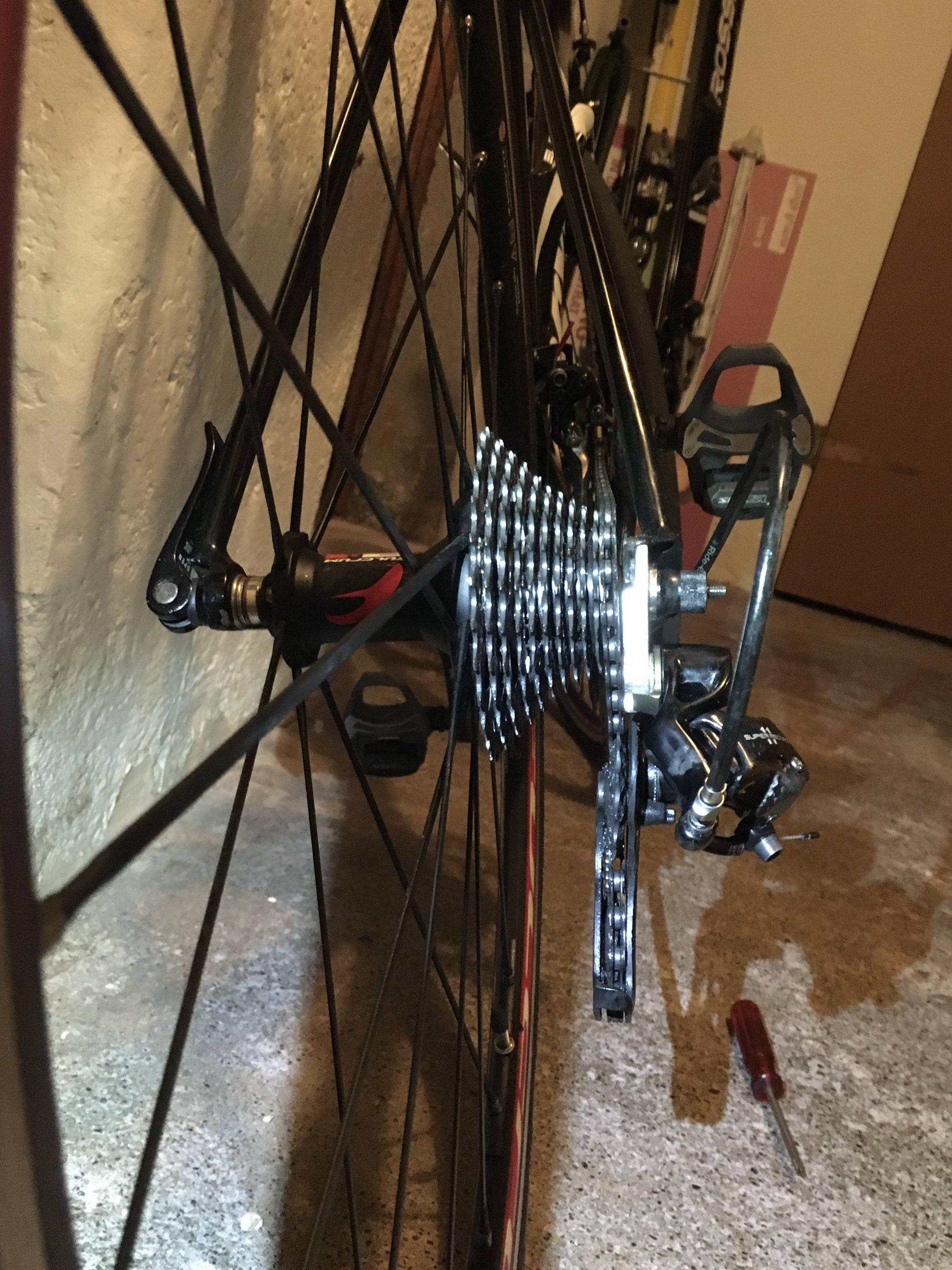 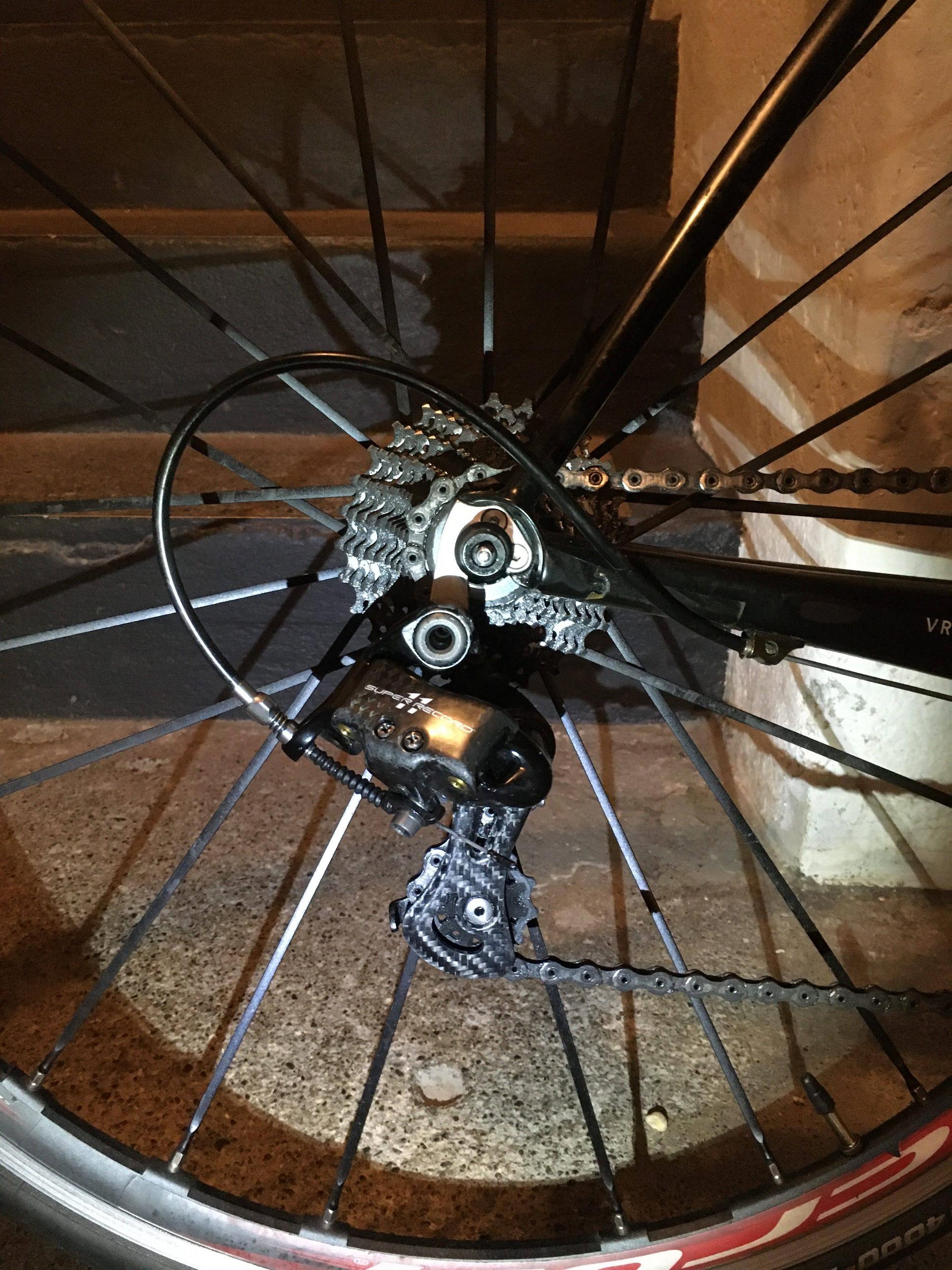 Is it possible that my chain is too short, or that the derailleur hangar is bent? I can't think of any other explaination.

The H-screw aka b-tension aka angle adjustment is meant to be adjusted in the lowest gear position for any rear derailleur where the guide pulley is offset from the cage pivot, which is most of them, including this. The manufacturer recommended distance will always be for that position.

For conventional road derailleurs like this, that 5mm number really means just short of the chain rumbling in the low gear. Two ways of saying the same thing.

All that said, it's not likely the H adjustment is your problem. It's a subtle adjustment and won't make or break shifting in most cases, the exceptions being if it's way out for no reason or on a derailleur with excess pivot slop from wear.

It's likely you're dealing with one of the common rear derailleur maladies Iike hanger alignment, cable friction, incorrect tension, etc. Hanger misalignment is a likely candidate from your pictures. Eleven speed has little tolerance for it.

You don't say specifically what your set up problems are but when training mechanics we recommend starting with the fundamentals and then working upwards, not skipping steps or assuming that things are correct, that may later prove not to be. That potentially saves you from a lot of lost time trying to get something to work where you have an undetected, fundamental, problem - that might be preventing correct function.

I'd suggest that you check all of the basics by reading / applying the information found in the relevant Campagnolo technical manual, freely available at www.campagnolo.com under Support>Documentation>Technical Manuals. Use the date filter to look at the 2012 Technical Manual as that is the one that applies to this gear system and subsequent, up to 2014, version Super Record. This group is exceedingly reliable, provided it's assembled correctly - but like all modern groups from all three major manufacturers, it does not tolerate poor set-up well.

Things that are often overlooked include checking that the levers that you have match the rear derailleur - 2015 and later levers don't work correctly with 2009-2014 derailleurs - that the cassette is properly torqued on the cassette body (40nm) - since this can affect sprocket-to-sprocket spacing - and that the cassette body is properly retained on the hub (the fixing nut is left-hand threaded to help it stay tight under thread precession - but even so, it's worth making sure it's locked), that the rear wheel is fully in the dropouts (best done with the bike on the ground), that the rear hanger is fully tightened to the frame and as commented above, is correctly aligned.

Set the high-gear limit screw without the gear cable attached - that way, you know that the only limited to derailleur movement in that direction is the limit screw, not a pre-load on the gear cable.

Then for the other adjustments, as Nathan says, H Screw adjustment is set when you are on the small chainring and the biggest sprocket.

11s systems are generally more vulnerable to incorrect sprocket to upper jockey spacing than say, 10, 9 or 8s (in descending order of sensitivity) and become more so, the greater the levels of wear and tear in each component, including the rear derailleur itself. Yours is at least 5 years old, so even if you have a new chain and cassette and new jockey wheels, there will be wear in the derailleur pivots, at the very least (unless it's NoS, of course).

When in that small chainring, big sprocket situation, as noted, you should have a 5-7mm gap between the tops of the jockey wheel teeth on the upper jockey, and the tops of the teeth on the biggest sprocket. It can be problematic to run the RD too close to the sprockets - there has to be enough clearance for the chain to climb "over" the teeth of the biggest sprocket, as well as for the chain to run without the "rumble" that Nathan comments on - which is why the 5-7mm figure, rather than "as close as possible" is given.

This spacing is not repeated on the big chainring (as you appear to be in the images) and / or in other sprockets (in the images, the chain is around the wrong sprocket) but by adjusting the balance between the upper and lower springs in the rear derailleur (which is what the H Screw does), when in that "easiest" gear, if the system is otherwise correctly assembled and set up (assuming all compatible components), the spacing on all the other sprockets will be correct.

Beware using 11-29 on these earlier 11s systems - in terms of maximum ranges, they work correctly on 12-29 or 11-27 but 11-29 slightly exceeds the largest-to-smallest sprocket size capacity of the rear derailleur and that occasionally gives shifting issues. This problem was fixed in 11s systems from 2015 onwards.

Wanted to post this in case this helps anyone. I had a similar dilemma to what the original poster described.

It seemed the H-Screw when fully inserted did not perform any function. When I took apart the derailleur and had a closer look at the screw it was obvious how it works. The screw operates like a worm gear and so when you completely screw it out and then screw it back in, it doesn't actually add more tension until you start driving it in further than flush. At that point the screw drives the teeth above it and adds tension.

Also as others have stated, the tension should be adjusted with the little ring in the front and big cog in the back.

GuestGuest
1
New contributor
Guest is a new contributor to this site. Take care in asking for clarification, commenting, and answering. Check out our Code of Conduct.
Add a comment  |

Not the answer you're looking for? Browse other questions tagged maintenance repair derailleur-rear campagnolo or ask your own question.

1
derailleur P-screw/B-screw does absolutely nothing
2
Can you take apart rear derailleurs, and how do you put them back together again?
3
Rear index shifting not staying in middle gears
3
Piston problem, not responsive
1
SR Suntour CR9 suspension cartridge removal
1
Campagnolo Record Headset
1
Replace Campagnolo record 9 speed front derailleur
3
Can't shift down from 50T with clutch on, but can shift down with clutch off, why?
2
Can I reorient my dérailleur so the top jockey doesn't hit the cassette?