Why is the Selle Anatomica X1 saddle rated for longer rides than the X2?

The X-series Touring bike saddles from Selle Anatomica are arguably the most comfortable bikepacking saddles in the world.

The main difference between the two is the frame, one is a chromoly frame and steel rails, the other is lighter with an aluminum frame that can be upgraded to take carbon rails.

What I want to know is, why is the lighter saddle "designed" to go short distances? 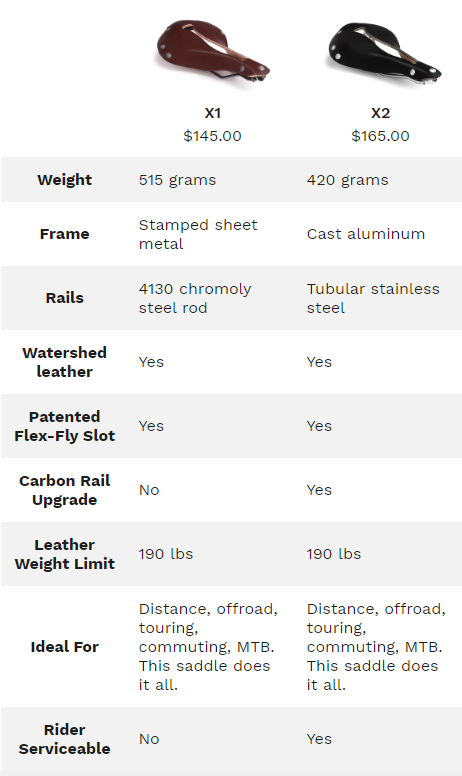 This might be the sort of question to ask Selle Anatomica. However, here is an educated guess based on the part descriptions.

Assume the balance of the saddle construction apart from the frame and seat rails is identical. Selle Anatomica may believe or they may have proof that the X2, with an aluminum frame and tubular steel rails, is weaker than the X1, i.e. the entire structure's yield strength is lower.

However, their own descriptions are confusing. This sentence about the X2 directly contradicts their usage ratings, emphasis mine:

The new frame used with our Series 2 saddles is lighter weight, stronger, and user serviceable.

Also, they say that the X2 is, emphasis mine:

And about the X1:

I'd hypothesize that the literature was written by a product manager who did not really think through how the yield strength of the X1 and X2 might compare. In any case, given the plain language of the descriptions, you should be able to ride either saddle if you are between 120 and 190 lbs. By implication, if you are over 190 lbs, Selle Anatomica might think that you are better off on the X1, assuming that the X1 actually has a higher yield strength. Also, the language is a bit sloppy.

Not the answer you're looking for? Browse other questions tagged saddle bikepacking or ask your own question.

5
Why do I do the "saddle shuffle" when riding?
2
Saddle for beginner rider!
2
longer seatpost for a folding bike
4
The right saddle for touring
4
Saddle for big guy
5
Why can't I find a comfortable saddle?
5
New Saddle For Gravel Bike
4
Saddle rail breaks often