Which tire is compatible with DT swiss c 1850 wheel

Also, I have done 50T chainring conversation on my bike. And use my bike only only Road. Is it possible to fit any lower width tire like 27mm ? Currently it is 33mm width.

Can you please suggest any alternative tire, or is it even possible to use a different brand tire on DT swiss c1850 spline wheels ? 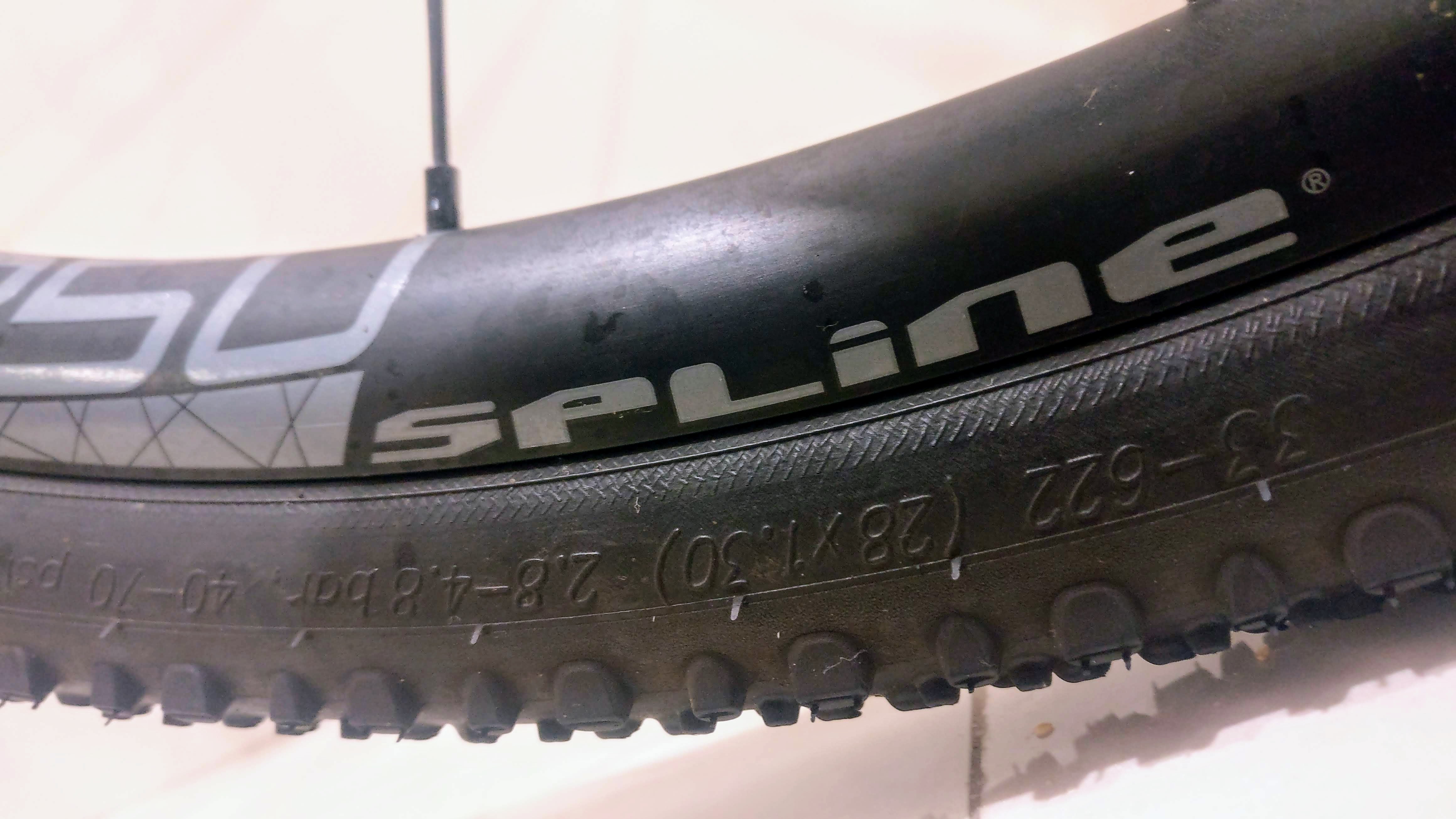 By way of background, the specified bike is a cyclocross bike. The rims have an internal width of 22mm. The bike was, as the OP stated, delivered with tires that are a nominal 33mm wide.

However, note that nominal tire width often doesn't equal to actual width (you can measure using vernier or electronic calipers), especially since rims vary in width, and there is a trend to wider rims on drop bar bikes. For example, I have a pair of Boyd Altamont rims with an internal width of 19.9mm. They have nominal 25mm Continental Grand Prix 4000 S2 tires mounted. These measure just over 27mm in actual width (by calipers). I have a pair of DT Swiss CR1800 rims, with a 22mm internal width. The 35mm Panaracer Gravelking SK's measured about 37mm as mounted.

I suspect the nominal tire sizes may be based on width when mounted on a rim with something like 15-17mm internal width.

Now, there are two parts to the question.

Can you mount any brand of tire to the rims?

The OP seems to have a misconception that only specific brands of tires can mount to specific rims. Fortunately, this is wrong. However, that sentence needs to be qualified a bit.

If you are mounting clincher tires with inner tubes, then for the most part, there are no compatibility issues. In some very rare cases, manufacturers may specify a list of compatible tires. There's no such list for DT Swiss rims. This situation is very rare, and it exists with some modern, hookless carbon wheels that usually have wide internal width.

I think this is irrelevant to the OP, but if he was mounting tubeless clinchers, then there may be some issues. The tire and rim size specifications for tubeless clinchers are still under development, and without a specification approved by the International Standards Organization (ISO), there may be cases where some tires don't fit some rims tightly enough to seal properly. However, there usually isn't a clear list. Riders in this situation may have to rely on anecdotal reports.

As an example of the above issue, Enve stated that its latest wheels require tubeless tires, even if you use an inner tube, and it specifies that some tires are incompatible, e.g. the otherwise very well regarded Continental Grand Prix 5000.

What width tires can you mount?

There is a potential duplicate answer to this part of the question.

However, the information currently present in that answer cites information provided by the ISO as of, I believe, 2015 or 2016. If you go by the chart in the accepted answer, then a rim with 22mm internal width was rated as compatible with 35 to 62mm tires (NB: these were probably nominal widths, rather than width as mounted). In other words, by the book, the tires originally supplied with the wheelset were not compatible. The OP should have crashed by now due to a tire blowing off the rim. And yet, here he is, apparently alive and well. (NB: if you have actually experienced a tire blowout, now would be a good time to say so.)

I think the ISO guidance in this case is conservative. Also, even in 2015/2016, 28mm performance road tires were not that common, and 22mm rims may not have been common on performance road bikes. We don't know if this standard was proposed based on comprehensive blowout testing, or if it was based on testing some common tire/width combinations and supplemented by expert opinion.

In practice, a number of current generation performance road wheels offer internal diameters of 21 to 25mm. Riders would typically mount tires with nominal widths of 25 or 28mm to these. Based on that, I'd argue that the OP can likely mount a 27-28mm road tire to the rims, assuming he is using tubes. I would prefer not to recommend a narrower tire, erring on the side of caution. In any case, 27-28mm tires should be more comfortable than 25s, and they should have comparable rolling resistance.

I am still skeptical of road tubeless setups due to the still-evolving standards and the very high pressures we would typically use. On the off chance the OP is thinking about a tubeless road tire, I'd reiterate this caution. I would then recommend at least a 28mm tire, and I would recommend that the OP not exceed 60 PSI (4 bar). Jan Heine, an engineer and the CEO of Rene Herse cycles, recommends this this as a general pressure limit. Zipp's recent 303S wheelset has a 23mm internal width (albeit it's of hookless construction), and for a 25mm tubeless tire, they recommended 61 PSI front, 64 PSI rear for a 165 lb rider, lower for wider tires.

Not the answer you're looking for? Browse other questions tagged tire wheels or ask your own question.

3
Any wheel on any fork / frame?
9
How do I determine my wheel size
14
How seriously should I take the maximum pressure rating of my cyclocross rims?
3
inner tube width range relative to tire width: reliability effects?
2
Can I inflate to 8bar?
2
Alternative for Schwalbe Kojak 35-584 tire
0
Which tires (and rear fender?) for Bianchi Metropoli Uno hybrid bike
4
Trainer tire selection (hybrid bike)