Reversible but not symmetrical lower plate in seatpost 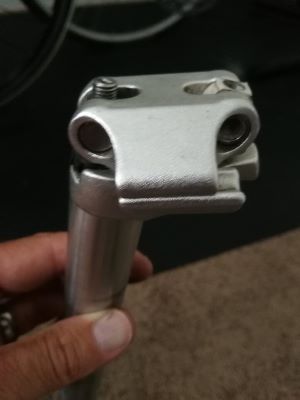 And here the plate is flipped around so it extends toward the front of the bike: 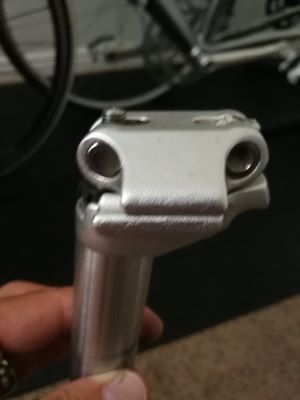 I can't remember how I had it positioned when I was actually using it. Does it matter which way it's set? If so, which is the right way?

Some Ritchey seat posts have this. They call it

The correct orientation depends on your fore/aft position. If you are more or less in the middle it shouldn’t matter.

Is there an arrow molded on the part anywhere? That would tell you. If not, I would put the extending lower tab forwards to give better support for the forwards saddle rails.

23
How do I keep my seat from tilting back?
2
What Seatpost Is This?
7
Does anyone make a split seat clamp?
8
Which way should a seat post clamp be oriented?
3
Seatpost Overextension
4
Are flip saddle posts available
1
Seatpost clamp bolt replacement
5
Is it possible to increase maximum seatpost insertion length by filing down a seat tube bottle cage mount boss?
4
Skipping bolts on seatpost , please help?