Apologies if this isn't directly relevant to cycling, although it does involve a cycling product.

However, playing around with these settings and setting it to navigate back there from home still seems to suggest the same route, no matter what permutation of avoidance / popularity settings I have (apart from not avoiding unpaved routes, but then it tries to go up a path which is only navigable on MTB and even then is not legal). I've also tried switching between the minimise distance, minimise time and minimise ascent routing settings to no avail.

Am I missing something here? If it's going to suggest routes like that it seems like a useless function.

Update Garmin support is investigating this.

Another update Just tried on another location. Navigating to the Ponderosa Cafe on the A542 / Horseshoe pass with popularity routing turned off and on the different minimise settings:

Interestingly, the minimise time setting actually minimises the ascent and distance as well. But again, none are close to the default Google route which is 23.5km, 356m ascent and 1hr37.

One other thing that is interesting / stupid is that I was actually at that cafe before and thought I'd see how it would direct me home on the minimise ascent setting (but didn't follow it). It tried doing the Moel Arthur route (minimise distance route above, but in reverse).

My guess is that "popularity routing" is weighted quite heavily in the choice of route, and "minimise time" is a secondary weighting.

I see Google has routed you on the A541, which is definitely more direct, but may be less "compatible" with cyclists and therefore less popular. The Strava route has used B5429 which is even narrower, but seems to have less traffic, based on Street View.

Strava and presumably Garmin can access their pool of data about where people ride. I'd posit that the climb out of Y Groes Fawr is rather popular, having 200 metres hard climb after a 100 metre of more-gentle climb. That's the kind of effort where pacing is critical, and it sorts the rabbits from the tortoises (the go-hard-and-blowers from the pacers) Specifically https://www.strava.com/segments/6671074 the Moel Arthur climb.

Putting that to the test - here's strava's heat map showing both google and your routes. 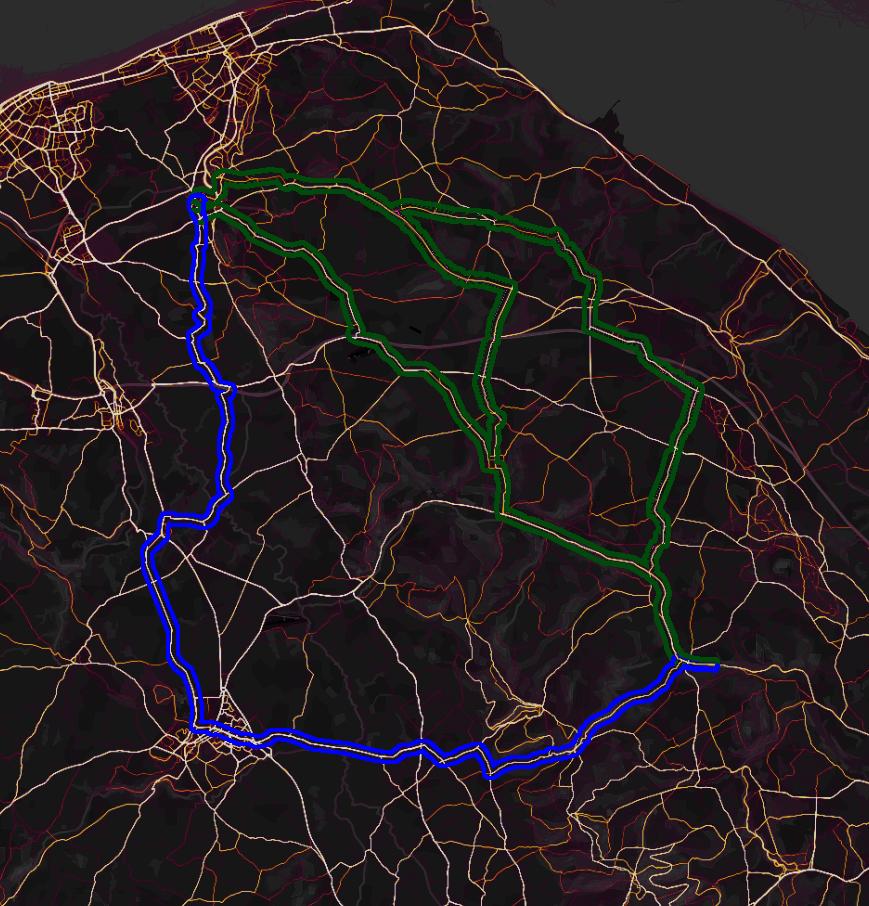 Visually you can see that the Strava route highlighted in Blue is brighter than the other three google routes, so while people do ride all those paths, the one you rode is more travelled by Strava users.
My first version of this had bright magenta for the google highlight, and it seriously obscured the point. The green and blue are chosen to both have similar low luminosity levels. So ignore any stray hot-pink dots please.

Search around more at https://www.strava.com/heatmap#12.14/-3.32479/53.25998/bluered/ride and see how the results match your personal experiences - the good riding roads should be more-ridden than the horrid roads.

Some routing algorithms really don't like UK A or even B roads, and will do silly things to try to avoid them. A short stretch of dual carriageway to allow overtaking is another potential feature for the algorithm to avoid. Many services use openstreetmap data, and tags there can be wrong, so it's possible there are one or two places the Garmin doesn't think riding is possible (and of course it uses old data as it's working offline)

I've had a look, using Komoot for playing. This uses OSM data and comes up with something similar to Google's first choice, though (as is its habit, especially set to "touring") avoids the A451 more than Google, adding 40m of climbing and 800m distance. A reasonable route anyway. It can't be that the Garmin was trying to avoid A roads, because of what it does near Trefnant.

It's strange, because a lot of algorithms go out of their way to put you on cycle routes, but NCR5 is offered by Google and not Garmin.

I can't see how a single-point bug can cause the route you got, because of where it goes after Trefnant.

Two partial suggestions, neither of which I can prove:

Strava's popularity (which I used to use a lot before their route planner became a paid feature) would sometimes pull the route in from a long way away; round here that often meant popular commuting routes, i.e. direct but busy, the opposite of your problem. Strava have a huge dataset; I wonder how big Garmin's is, or was when it was downloaded to your device. We of course don't know their weightings, but it's possible that every segment you rode had a history of a few riders, while some segments on the more direct route had none at all.

With all those options, I'd expect a "minimise climbing" option - it would be more relevant to bike routing than some of what you did have.

BTW if one option to avoid is literally called "narrow trails" I would read that as avoiding singletrack and maybe some silly bike paths, i.e. if you can get a car down it, it's not a narrow trail.

Not the answer you're looking for? Browse other questions tagged garmin navigation or ask your own question.