I am about to get myself a hybrid bike, but being tight on budget (~ 200USD). I didn't really have many options to choose from. I'd initially thought of buying this particular bike, Mach City Munich after reading good reviews about it online, but it's been unavailable for the past month, without any surety about when it will be.

So, the shopkeepers suggested I get myself another bike, named Montra Downtown.

I live in a city where roads have potholes and bumpers more frequent than lighting poles, (but not the kind that'd require an MTB).

The bike will primarily be used for commute (~15 kilometres, 6 days a week), but I'm also thinking of taking it out for long rides (about a hundred kilometres or so) on weekends.

Both of them have a triple chain ring system.

Downtown has an alloy (6061) body with a steel fork whereas Munich has both the body and fork made of steel.

Both of them have a 21 speed system with triple chain ring system.

Downtown has Shimano TY300 whereas Munich has TZ40 rear derailleur.

Both have Shimano easy fire shifters with integrated brake levers, with Munich having a three finger braking, and Downtown having a two-finger.

The brakes, however, on Downtown are disc brakes, whereas on Munich are V brakes.

The cassettes on both are the same too.

I've never ridden a bike with gears as of yet, this will be my first time.

I'm confused between which one to buy for a multitude of reasons. I've been told that a steel body has a give, it flexes, which allows for a more comfortable ride in a place that has roads that aren't very smooth, which does not happen with an aluminum (alloy) frame.

I've heard that disc brakes are harder, require a lot of maintenance and are more expensive to maintain compared to V brakes too.

The bike will most likely be stored about two storeys high, where it'd need to be picked up and carried through the staircase.

And last, but not the least, the cost of Downtown is about 20% higher than Munich. (both are in the budget nevertheless).

If I buy Munich, is it a good idea to swap components and use? For example, the rear derailleur?

Moreover, since I've chosen to buy a rigid bike (because my limited scope of knowledge tells me that a suspension frame with such a low price tag will only be a pain), is adding a suspension seat post a good idea?

Ultimately, you're comparing two entry level bikes. The differences are small and mostly irrelevant. The one thing that really matters is how they fit you - ride both and figure which one is more comfortable to you. So bare minimum is to get a leg over each one and ride it around.

Most bike shops will let you pedal around, which is enough to rank them in immediate comfort. If you're buying online, then you're stuck and have to make the best guess you can. This is one reason for buying from a real LBS and not a boxmover.

This question is pure shopping and is off-topic for Stackexchange, because there's virtually no chance of this question being useful to anyone else. For example, neither of these bike brands exist in my area.

The transmissions are Tourney grade, which is shimano's second bottom groupset in terms of cost or quality. It will work fine, but comparing variants is like comparing pebbles in a stream - in detail there are differences but up close, they're all much the same.

And no, if you were asking about expensive top-end bike comparisons, that would still be off-topic.

For your price range it might be wiser to get an older higher quality second-hand bike. A touring bike from the 90s might be in that price range (they are in Europe, I'm not sure about the USA) and it will be tough enough to deal with any commute while also being set up for longer rides too.

If you can find one which hasn't been modified by the owner then you can depend on fitted components being dependable in quality. And a tourer may have come fitted with a rear rack and panniers, ideal for commuting.

The downside will be the weight - these older steel touring frames aren't designed to be light weight.

I tend to agree that the differences between the two bikes you listed are minor. It comes down to personal fit, like Criggie said.

Another option is buying used. If you aren't married to the Munich or the Downtown, used is the way to go. I'm in the United States where, unfortunately, $200 just won't get you much brand new. You should be able to find a capable pre-owned bike for that price, though. I'd advise going to a local shop, because they won't sell you a bike that isn't safe. If you decide to purchase a bike on Craigslist or some similar service, do not ride it without first having it checked out by a professional.

Downvoted because the question is off-topic, but I will give you a few pieces of advice...

Instead of buying a new bike, use the money to buy an older (steel frame) mountain bike. Do you need a mtn bike if you are going to be riding in the city? Yes. Mtn bikes were made to be ridden on rough terrain. Most city streets provide rough terrain.

I do not know where you live, but I spent a few minutes looking through a local online marketplace (craigslist), and found this old mountain bike which would absolutely kick ass as a commuter bike. I have commuted thousands of miles on bikes similar to this one. 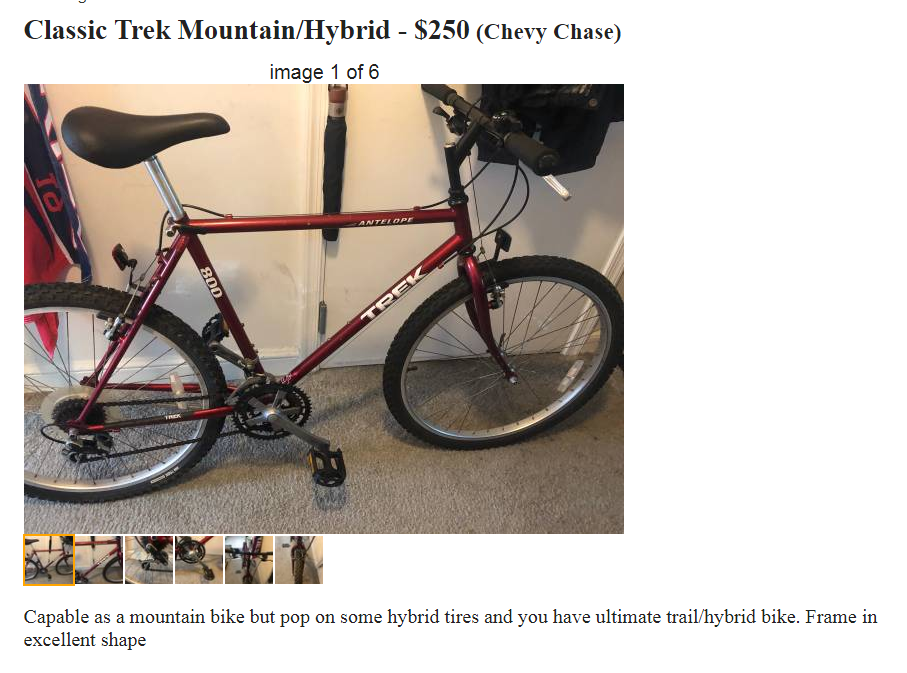 Not the answer you're looking for? Browse other questions tagged seatpost hybrid-bike or ask your own question.

8
Hybrid or Road Bike?
3
What criteria should I be looking for in selecting a new hybrid bike model?
5
Slipping aluminium seatpost in aluminium frame
1
Could someone confirm my assumption about Btwin Original 520 Hybrid front wheel?
2
What factors to take into account when choosing a hybrid bike?
2
Is it okay to buy a cycle from a new brand?
7
Before re-inserting a stuck seat post what should I do to the steel/alloy surfaces?