I am looking for a commuting / recreation scooter but have no experience of using one. I am very familiar with riding a bike and using handlebar-mounted brake levers.

My budget is sub-£100 (GBP) and this appears to give me three options:

For occasional use I presume friction-on-tyre would be adequate, albeit cause accelerated tyre wear. Does this type of brake perform adequately for an adult (70kg) travelling around town?

Would the additional handlebar-mounted lever be useful or prove ineffective for rapid braking? From the photos I've seen, there appears to be little mechanical advantage in the braking mechanism.

Is a rear disc brake a desirable option for occasional use in fair weather? My concern is the trade-off in getting a better braking system vs. lower standard elsewhere in a budget machine.

I used to commute by kick-driven scooter. I rode about 3 miles a day, perhaps 700 miles in total (max 5% grade uphill; max 7.5% downhill). I feel reasonably qualified to discuss some of the implications.

My rides were two small folding Razor scooters, bought second-hand, at $10 each. They have the foot-operated rear friction brakes. One scooter was in great shape. The other had some peeling handlebar foam but was otherwise fine.

You need to lean your weight way back. Folding scooters typically have wheels that are quite small, and even those that do not fold will still have much smaller wheels than a bicycle. If you don't lean backward, you are likely to pitch forward over the handlebars when slowing down.

Unless it is wet outside, the limiting factor of foot-brakes is not typically the braking force. It is how much torque you can put onto the rear of the scooter to avoid that nasty trip over the handlebars. Your braking efficacy is certainly diminished in wet weather, and you may need to reduce speed to compensate or ride the brake to slough off some of the water. Wet leaves are your worst case, and they stay wet much longer than pavement. Wet leaves will slide right over each other, giving you zero braking power and probably fishtailing your scooter.

All scooter brake options I know of operate via friction. This means you convert all of the reduction in your forward-movement energy into sound and heat. That's a lot of heat. You can never use a foot-brake barefoot because of burns, and I literally melted the sole of some shoes. This is probably an argument in favor of handbrakes. But recognize that the handbrake advantage is more about heat dissipation and less about actual braking power, since any gains are mooted by front-tip-over torque.

After 500 miles on the first scooter, the aluminum panel of the rear brake wore through, and I combined the least worn parts of each scooter to continue riding. The wheel had worn down somewhat, but it outlasted the aluminum. Also, you can swap front and rear wheels for longevity.

Other considerations for scooters

Wheel size is a very important factor. The larger your wheels, the less you will notice bad surfaces. Any discontinuity in the pavement that is higher than half your wheel radius is one you must prepare and lean back for. Any discontinuity higher than your whole wheel radius is one you have to bunny hop. (Or until you can hop: step off for a pace, pop the scooter over the bump, and step back on. This is a motion you will perform a lot.)

Ultimately, I stopped using mine because of foot pain, primarily on the uphill sections. I tried different foot strokes, but those strokes just wore out my feet in different places. There might be advice you could get from longboard riders that would be helpful for this, but my "scommuting" days are over. I now have a folding bicycle.

I still have the remaining scooter and occasionally take it to the workplace when I want to grab lunch from a slightly farther distance, but it's no longer a regular part of my routine.

It would help if your post were more specific about what you mean by "scooter". At first, I thought you were asking about a motor scooter, but on closer inspection, I think you are asking about the type of scooter built with a long, low platform one stands on with small wheels at the front and back, and a tall steering tube at the front. E.g. something like this: 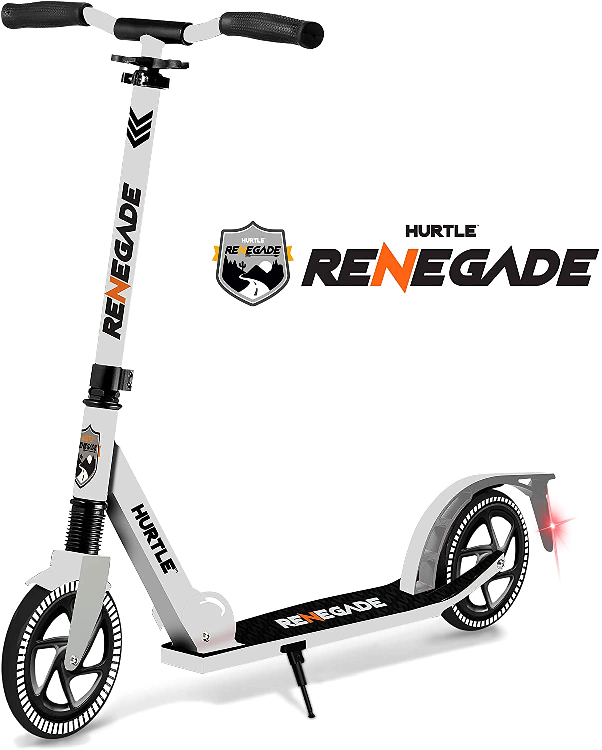 In either case, I'm not entirely sure that questions about that type of vehicle are on-topic here. But in the spirit of helping and giving the benefit of the doubt…

Knowing exactly what options you are considering would help a lot, as even between different examples of the designs you mention, there may be important differences. That said…

Does this type of brake perform adequately for an adult (70kg) travelling around town?

Any scooter should include documentation of whatever its designed maximum weight for a rider is. As long as you are within the stated weight limit, the scooter should perform adequately, with respect to supporting the weight, maintaining safe stability for riding, and braking performance. If it did not, I would expect the consumer-protection agency in your jurisdiction to have something to say about the matter.

Would the additional handlebar-mounted lever be useful or prove ineffective for rapid braking?

Frankly, I am skeptical that any brake at all is really that useful for a rapid stop. I can see using a brake to modulate speed, especially if coasting down a hill, and for gentle stops. But one should not be traveling very fast on a scooter like this, and in an emergency where an immediate stop is imperative, I would expect it to be much more reliable to just hop off the scooter and come to a running stop on foot.

There simply isn't much wheel contact area on the road to effect strong stopping action. As compared to a bike, there's some improvement in the friction-on-tire design because you're naturally shifting your weight back onto the wheel providing braking power, but it's probably still going to involve a significant amount of skidding (which not only wears out the tire much more quickly, but greatly reduces the friction that is slowing you down).

At a safe speed (e.g. in the ballpark of 10 mph/15 kph), it should be safe enough to stop yourself on foot. If you're traveling twice that speed, well…trying to hop off is likely to be very dangerous, but it's not like you're going to get good braking performance staying on the scooter either. That's just too fast for that kind of vehicle.

Is a rear disc brake a desirable option for occasional use in fair weather?

"Desirable" how? On the plus side, it might reduce wear and tear on the tire and friction surface applied to the tire. So there's that. On the other hand, it adds another system to the scooter that now needs maintenance. Either way, I don't think you're going that a disc-brake system is going to improve braking performance, and it might even be less effective, since you're less likely to be shifting your weight back as you apply the brake if using a hand-operated brake.

Personally, if it were me considering this purchase, I would focus on deciding what it is I really want. At that price point, I don't think you're going to find something suitable for anything other than the shortest commutes. It's really more of a recreation/toy sort of thing.

If what you want is just something fun to scoot around on, then a scooter sounds like a great option. But otherwise, for a longer commute and/or real transportation needs, I would focus on an actual bike.

At your price point, you'll want to look at well-used bikes, and you might want to push the budget a bit so that you can accommodate some initial parts replacements to get a cheap bike back up to snuff. You can't get a great bike for that kind of money, but you should be able to find something that can get you from point A to point B more safely, and even more quickly, than a scooter could. Be prepared to do the bulk of the maintenance on the bike yourself to save money; this means that while you can afford to buy a used bike with various consumables that need replacing (tires, brake pads, chain, etc.), you should try hard to make sure that the wheels are at least straight, there's no major rust (especially no rust on the rims and spokes), etc. I.e. make sure the bike is fundamentally sound, even if in need of some TLC, so that you can handle the needed maintenance items yourself.

Anyway, that's my two cents, even if that does suggest your question is, at least to some extent, "opinion based". :)

I would suggest getting a bigger serious scooter. Those have bigger wheels and are faster and much more durable. They also have rim or disc brakes on both wheels, no tyre friction brakes.

Although they will cost more than 100 GBP, there are some budget options available (try second hand!) and they are still much cheaper than bicycles. For example, the entry-level Yedoo two costs around 140 GBP but gives you so much more performance. I am not suggesting this particular model or brand and I did not test it myself. 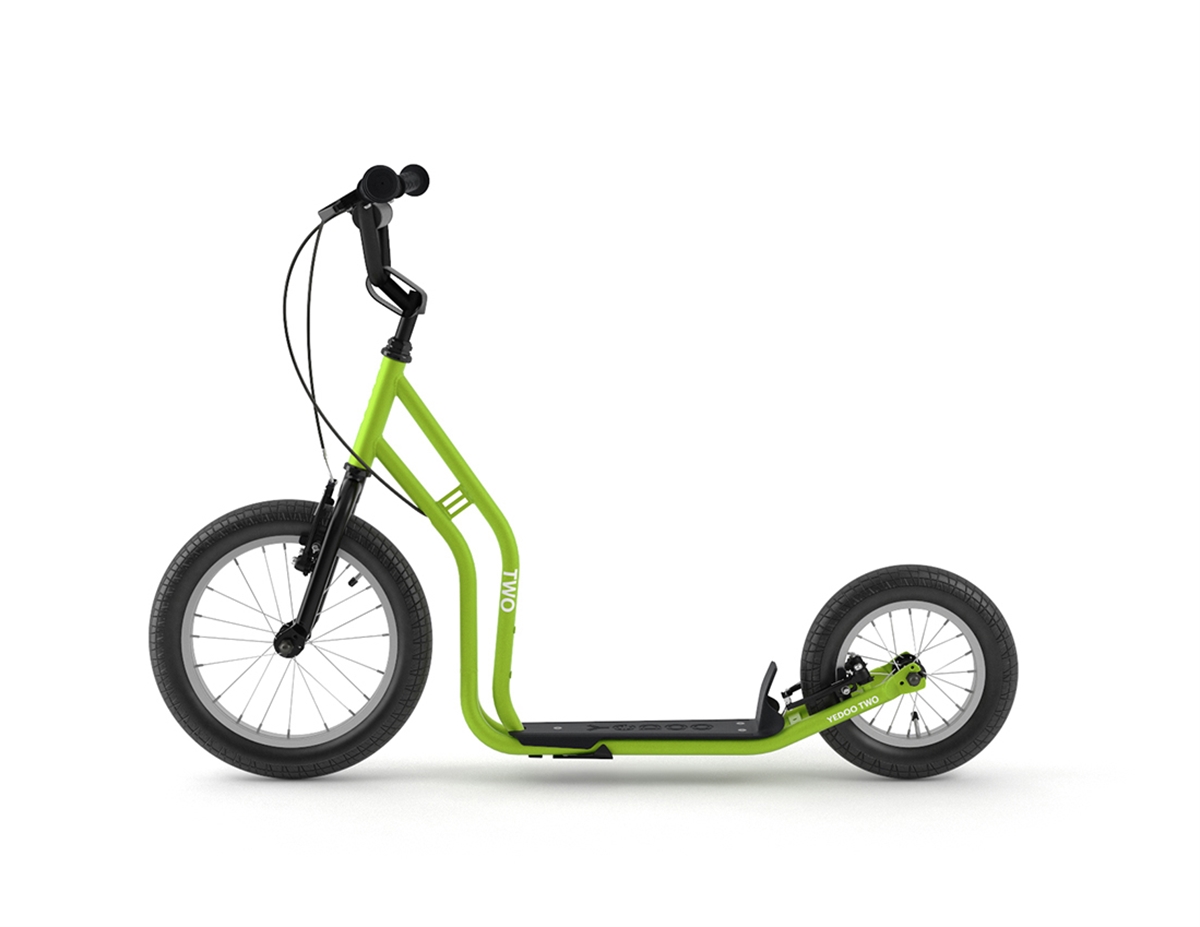 On the other hand if you need something truly small, it won't be for you and the folding ones cost more.

Assuming the scooterer isn't moving their body mass backward, then I'd guess braking split would be about the same. If they lower their head and stick the backside backward while braking, then the balance will improve but is unlikely to get to parity.

So I'd say the rear brake doesn't really matter that much, until that one day your front brake fails under need. If the front brake locks up hard on a scooter then you're going OTB at almost any speed. If it fails open, then you will need the rear brake to stop, or just coast to a stop with the aforementioned "get off and run" technique.

Upshot Get a scooter with two working brakes, not just one, like in Vladimir's excellent answer https://bicycles.stackexchange.com/a/71348/19705

Not the answer you're looking for? Browse other questions tagged brakes disc-brake or ask your own question.