Will this electric air pump suit my tires and work for me?

I have to buy air pump for bicycle, I saw this one online on Walmart.

My bicycle tires have a pressure range between 30 and 50 psi. Will this pump work, or should I buy mechanical one?

What are it's drawbacks? 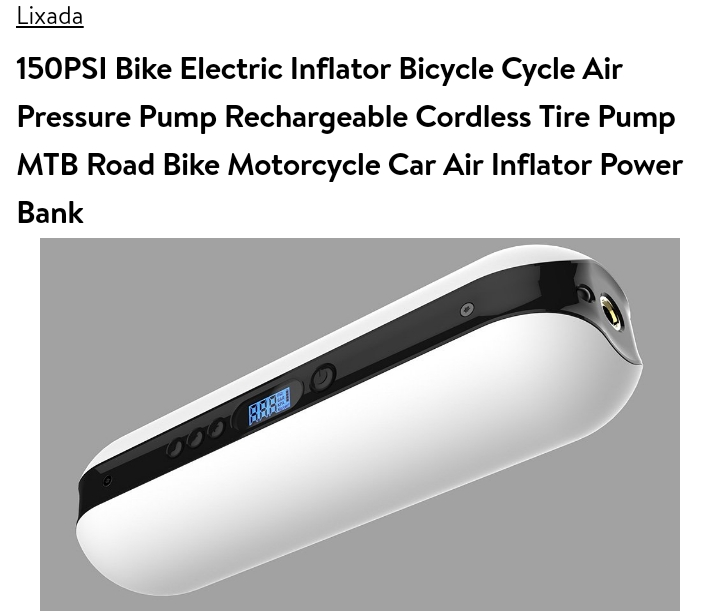 In my experience, batteries are frequently flat when you need them. This unit has the likelyhood of sitting unused for months, going flat, and then being useless when you really need it.

I strongly suggest you get a manual mini-pump instead. Sure it'll be slow, but its more likely to work when you need it. High tech is not always appropriate.

Based on the cost, you could easily buy a nice minipump for in your pocket/bag while riding, AND have the luxury of a floor pump (aka a track pump) to leave at home for maintenance.

I personally carry a mini-floor pump on one bike. Though I use the floor pump weekly for top-ups, I only use the mini pumps when something goes wrong (for me or someone else who didn't bring one! )

Here's a review of two electric air pumps. https://cyclingtips.com/2020/03/xiaomi-mijia-vs-fumpa-electric-tire-inflators-reviewed/ Neither are the one you suggested, but the general points are still relevant.

Neither are intended for riding with.

recorded the Mi at 85 dB, while the Fumpa has a wake-the-neighbours 99 dB output. In both cases, you’ll want to reinflate your tires the night before you sneak out for your early-morning ride.

Upshot Buy a minipump for your pocket for emergencies, and a floor pump to keep at home.

These products are for car owners. Not useful for cyclists as a track pump is lighter and easy to use

You might check out Topeak's digital pressure gauge if you want digital. https://www.topeak.com/global/en/products/gauges/351-smartgauge-d2

The weight is 1/10 of these digital pumps, so you can easily carry it around .

But pump your own tyres.

This expands slightly on Criggie's answer.

Cyclists typically have two separate pumps: a floor pump for inflation at home, and a mini pump or CO2 inflator that they take with them for emergency inflation on the road. Mini pumps take longer to inflate tires, rely a lot more on upper body strength, and usually lack a pressure gauge. Floor pumps lack these disadvantages, but they aren't portable.

Criggie linked to a review by David Rome on Cyclingtips which compared two products: a Fumpa electric inflator that's akin to a floor pump, and a Xiaomi version of the same. Fumpa is an Australian company, and they claim that the individual parts are sourced from Australia, China, Japan, Spain, and the United States. Xiaomi is a mainland Chinese company, and presumably its supply chain is all in mainland China. The Fumpa cost US$179, and the Xiaomi pump cost Dave US$45 shipped to Australia. As is obvious, these pumps are electrically operated, and they are programmable. Provided the pressure gauges are accurate (Dave contended that they both were), one can pre-program a desired inflation pressure for the pump.

In a separate review, Rome examined the standard Fumpa and a mini version of the Fumpa. The mini Fumpa is akin to a mini pump, and could easily be carried on bike, albeit it isn't waterproof. Rome's conclusion was that the standard Fumpa was a good travel pump. He is a serious cyclist, and he frequently travels by plane. The standard Fumpa allows him to not pack a floor pump, or one of the slightly smaller travel variants of a floor pump. This is a considerable space savings. Alternatively, the article mentioned that race mechanics have frequently used battery-operated inflators to quickly inflate or adjust pressure on multiple tires.

Based on that, I'd contend that electric inflators are a niche product that some serious cyclists should think about buying. They do not appear to be a logical purchase for the average cyclist.

I was going to also say that these pumps are probably more complex than standard floor pumps. With more complex items, I'd argue that going to cheaper quality can frequently compromise the item. I believe we clearly see this with disc vs. rim brakes: many lower-quality mechanical disc brakes don't generate more braking force than a decent rim brake, and the mechanical disc brakes are more expensive to boot. The same is true with suspension components on many hybrid bicycles designed for casual users who mainly tide on paths or roads: it would be better to ditch the suspension, rely on the tires to cushion the ride, and upgrade to better components elsewhere.

That said, the Xiaomi pump that Rome reviewed seemed to be of adequate quality during the review period despite the low price (and the Lixada pump is actually more expensive than the Xiaomi). It may be possible to build a small electric pump, at sufficient quality for a casual cyclist, at a reasonable price. I would still caution that the moving parts, especially the inflation parts, might not prove to be durable in time. Furthermore, the quality of the lithium ion battery might be subpar. With the same number of charge-discharge cycles, a good lithium ion battery should retain its maximum capacity better than a poor one. This might not be as much an issue if the OP usually leaves the pump plugged in (but NB: keeping your battery at maximum charge all the time actually compromises its service life). Thus, I'd second the recommendation that the OP get a basic mechanical floor pump.

Not the answer you're looking for? Browse other questions tagged pump or ask your own question.

4
Does a typical floor pump have an integrated one-way valve?
1
What kind of pump do I need for this valve?
12
How to inflate a tire with a Presta valve?
5
Mini Pumps For Roadbike (120 psi)?
3
Bicycle hand pump pressure gauge
8
How does this hand pump work
0
How can I inflate a presta tyre with just one hand
5
Pump head suitable for for small tires
4
Bike tires only inflate up to 30psi with foot pump
4
Tires not holding air at high pressure