What tyres would be better suited? 32c or 35c

I'm from, Kolkata, India, and the place isn't best known for its roads, at least. Thinking of getting a new bike.. But I happen to be someone who's got absolutely no knowledge about any, and I'm even yet to ride a geared bike!

I don't want to run into many punctures and still have a comfortable ride. The bike would mostly be used for commute and then for longer rides during the weekends (100 kilometres or more). I'm guessing if I have thinner tyres they're very likely to get punctured often. So I chose relatively thick tyres, but not too thick since that'd get me lower speeds.. Would 700×35c tyres be better or 700×32c?

The attached image I'd of how typical roads here happen to be, if there arises a need for reference. 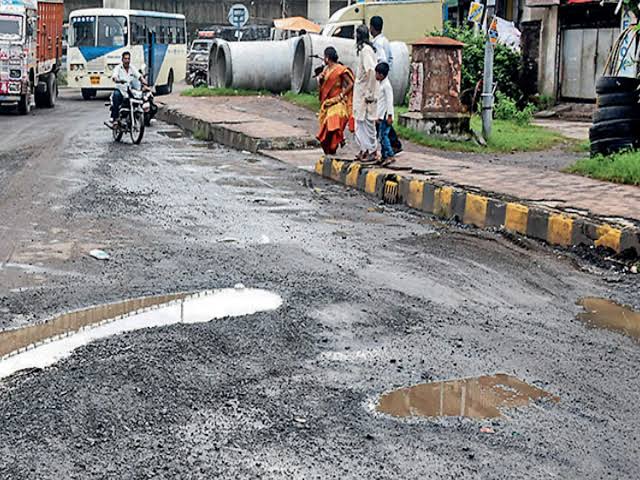 Good wide tires don’t necessarily have bad rolling resistance. If you have to go slow because of bad roads it will slow you down much more (and be much more uncomfortable).

I’d consider going even wider than 35mm or at least get a bicycle which has the option of fitting wider tires.

I’m not sure what’s available in your area but I’d get something like the Schwalbe Marathon Racer or Marathon Almotion or Continental Contact Urban or TopContact.

Punctures are not directly related to tire width. Pinch flats are mostly related to low tire pressure (i.e. your pressure being so low that the tube gets pinched between tire and rim).

On this poor road, if you have the choice between 32mm and 35mm, definitely pick the 35mm, but I would advise an even wider tire, something between 45mm and 60mm at least. You could also consider >100mm fatbike tires. The road doesn't look so bad that a fatbike is a necessity but it's something for you to consider.

Don't select the bike based on the stock tires it has (unless you want fatbike tires in which case you have to buy a fatbike). You can always change the tires. Other components may be more difficult to change. However, the rim width can constrain the width of tires you can mount on them so avoid bikes that have narrow rims.

However, do note that bikes tires suffer from punctures more than car tires. Especially on this road! There are two approaches to punctures:

Usually for strategy (1) I would recommend the widest low rolling resistance tires you can find (which in today's market seems to be Continental Grand Prix 5000 32mm).

For strategy (2) I would recommend some truly puncture protected tire like Schwalbe Marathon Plus. It still occasionally suffers from punctures but more rarely than low rolling resistance tires.

In my opinion, on reasonable roads strategy (1) is better because the time you lose repairing punctures is only less than one tenth of the time you would lose because of the puncture protection increasing rolling resistance.

For this road, I might consider strategy (2). The widest Schwalbe Marathon Plus tire seems to be 622-47 so it's 47mm wide.

Unfortunately, for fatbikes, tires as well puncture protected as Schwalbe Marathon Plus don't seem to be easily available (or at least I couldn't find such tires), so if you select a fatbike you'll have to sacrifice on puncture protection.

The general rule today is that wider is usually better, up to the point where it exceeds your frame's and rims' limits, taking you into a different bike type.

Your photo shows what would be considered a gravel road by Western cyclist standards. Such roads are best served by 32 to 47mm tires, on the wide side of road tires, what's known as gravel bikes today. 42mm will be better than 35.

Tire rolling resistance, as measured on a flat surface, is of most concern on good quality asphalt/concrete roads. Elsewhere, the better traction provided by wider tires, and especially tires with some thread, wins hands down. Narrow tires are vulnerable to surface irregularities and don't save much except for weight and drag.

Since bikes that are "just right" might be expensive, if cost's a concern, you could also consider a mountain or hybrid bike, which tend to use ~2" wide tires. They're not as well-geared for speed. The main reason 2" tires are "slower" than 47mm is that they're usually fitted to "slower" bikes, and tend to be knobbier.

A hardtail can make the ride easy on your hands, eating up all the bumps, but a suspension fork is still very optional here. Against small potholes, 2" tires at moderate pressure are sufficient suspension by themselves.

Wider than 2" is off-road tire territory, and any increase over 2" won't add value here. I often have to ride asphalt (to the actual trails) on a 3" tire, and you begin to feel the extra weight and rolling resistance there. Wider than 3" is fatbikes, and these are for snow or very loose terrain. With 35-47mm, the loss vs narrow tires is just a small amount of weight and drag.

At your level, the "engine" is more likely to limit the speed than the bike. The differences comes from road, CX or gravel bikes having faster gears and a more aggressive riding position, which saves on drag. But this position also takes some effort to get used to.

All in all, it's not SUV vs racecar; it's maybe 1-2 km/h of average speed between a "fast" cyclocross and a "slow" mountain/hybrid bike, for a rider that's just starting out and doesn't take either to their limit. Pick the bike you're comfortable with, both riding and maintaining, not the one you think might be faster.