I use a BMC TM02 on CycleOps Magnus. The seat bolt has sheared off twice while riding on the trainer.

The seat is attached to the post by a single stainless steel bolt. KSFC 12.9 appears on the head of the bolt.

The first time I had adjusted the bolt and may have overtightened it. The second time, the shop that sold me the bike installed the seat and tightened it to manufacturer's spec. The seat is positioned with the clamp in the middle of the rails. The seat is a Selle SMP Glider.

Any experience with this? Any idea why the bolt fails? 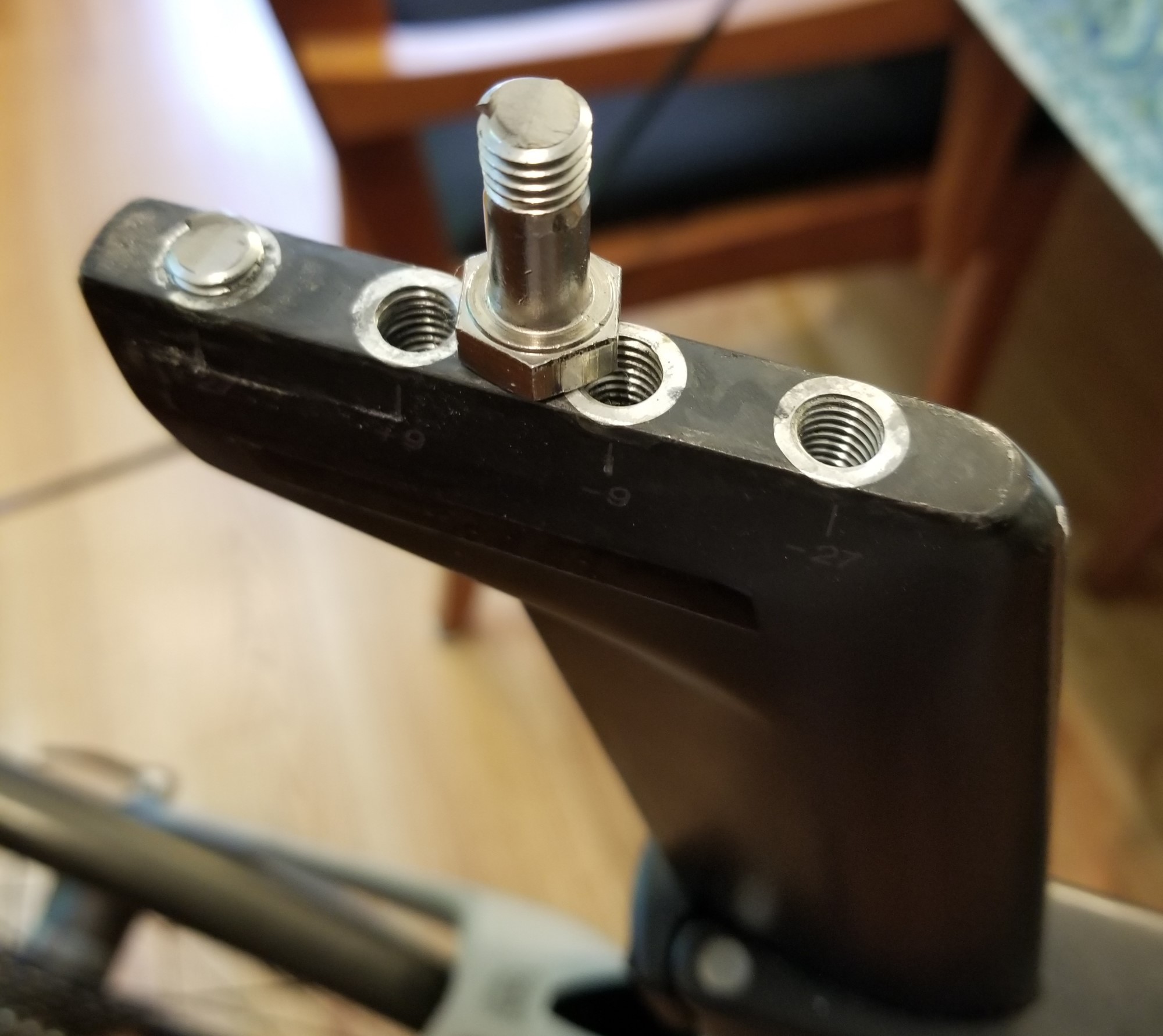 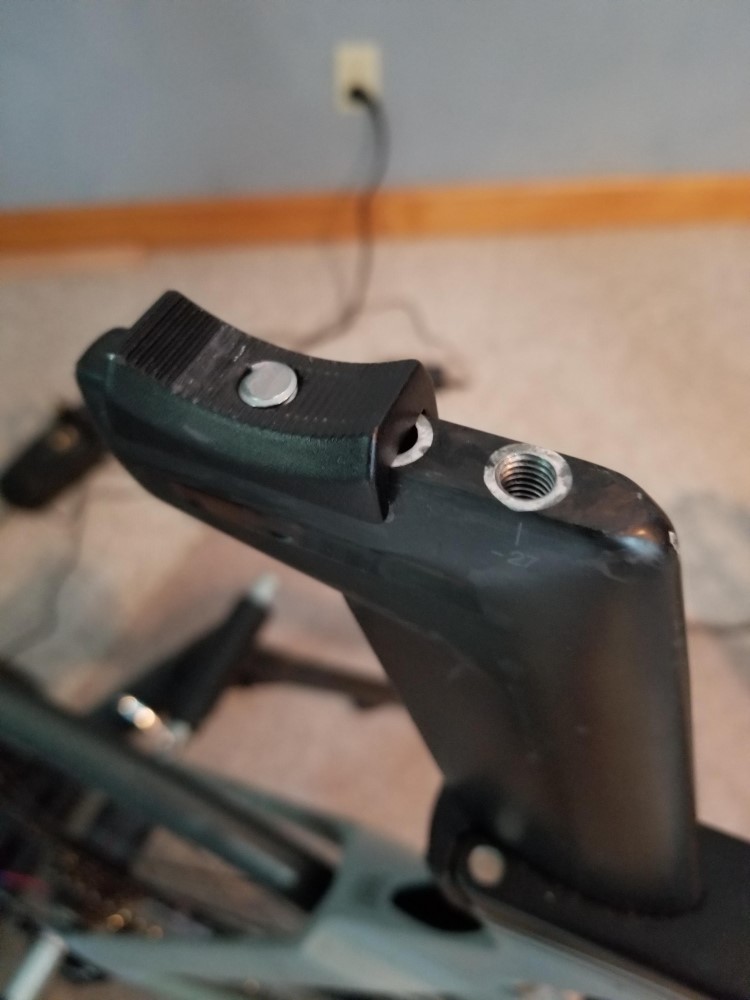 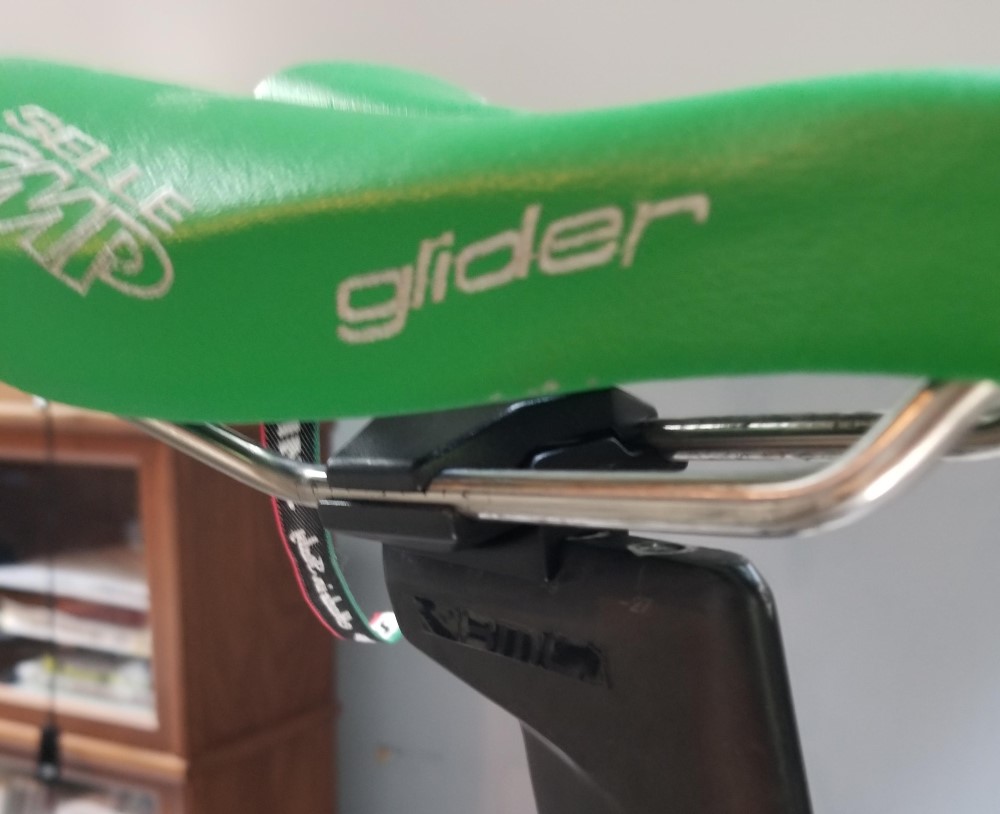 LBS talked to BMC. BMC said bolt can be torqued to 2x recommendation. LBS set it to 20Nm (2x the recommended 10Nm). I bought a torque wrench capable of 20Nm and check the bolt regularly. So far, no issues.

Any idea why the bolt fails?

Bottom line: I believe the bolt fails because the seat post clamping mechanism design causes fatigue in the bolt.

ASTM E1823-10a, Terminology Relating to Fatigue and Fracture Testing, defines fatigue as: The process of progressive localized permanent structural change occurring in a material subjected to conditions that produce fluctuating stresses and strains at some point or points and that may culminate in cracks or complete fracture after a sufficient number of fluctuations. "Fastener Fatigue" Fastenal.com

The article linked above contains many pictures and detailed descriptions of how to diagnose many aspects of fatigue failure.

What it boils down to is that the bolt was flexed back and forth - subjected to "fluctuating stresses and strains" in the same place until it broke.

The fastener assembly process is one of the most important, but often overlooked, contributors to fatigue performance. The cyclic-stress amplitude imposed on a given fastener (and therefore fatigue performance) is highly dependent on preload. Specifically, increased preload results in decreased cyclic stress-amplitude, particularly at loads below the clamping force imposed by the fastener. Fatigue of Threaded Fasteners

So, in general tighter bolts are less susceptible to fatigue failure.
The "Fatigue of Threaded Fasteners" article goes on to say:

The concept of higher preloads resulting in increased fatigue performance may be counterintuitive, which might otherwise suggest that increasing the tightening force of a bolt may increase propensity for failure. Insufficient preload has been attributed to the cause of the majority of fastener fatigue failures.

Later it says that excessive preloads are bad. It should be tight but not too tight.

This is a little crazy and you shouldn't even have to think about this but it might be possible to make it last longer by riding softer. Sometimes it's possible to mitigate poor design by changing behavior.

Edit:
The bolt in your post is 12.9 which is a metric rating.
There is no bolt greater strength than 12.9

Some of the comments reflect the fact that there are counterfeit bolts - one that has a rating stamped on it that it does not deserve.
If you broke a real 12.9 bolt there is no better bolt to get. To make sure you are using a real 12.9 bolt you need to get one from a reputable source.

It looks like the way you positioned the seat and the seatpost clamp bolt are both working hard against the bolt's metal fatigue rating. You selected the farthest back hole in the seatpost and also have the seat setup far back on the rails. You picked the worst combination in terms of leverage on that bolt dooming it to fail. Set up the seat clamp mounting more forward on the rails and pick a bolt hole further forward on that post.

Not the answer you're looking for? Browse other questions tagged repair seatpost failure or ask your own question.