I have a bike (Cannondale Quick MX) I used frequently until last fall, when I got a driving license (not my first, well out of my teens) and a car to use. The bike is 3 1/2 years old now.

Since the car ruined my life ;) I only ride occasionally. Recently I got it out for the first time in a month or so :( and discovered the rear brake had no pressure -- the handle was loose and the calipers did not move.

I got a bleed kit a while back when I felt the pressure was low, and a litre of fluid, so I refilled it and it is now working normally. While I was doing this, at one point when pumping the brake handle with the bleed valve closed (following instructions, doing this alternating with quickly opening the valve to let air bubbles out) the caliper1 popped out (I had removed the pads2).

I put it back and applied one of the plastic tools in the bleed kit (there's a bunch of these that aren't mentioned in the instructions) that clearly seemed intended to insert into the space where the pads go to hold the calipers in place, then at the end put the pads back.

However, the brake itself is slightly too tight -- not noticeable riding, but if you spin the wheel freely with the brake open, it stops just a bit prematurely because the disc lightly touches one of the pads, pictured below. 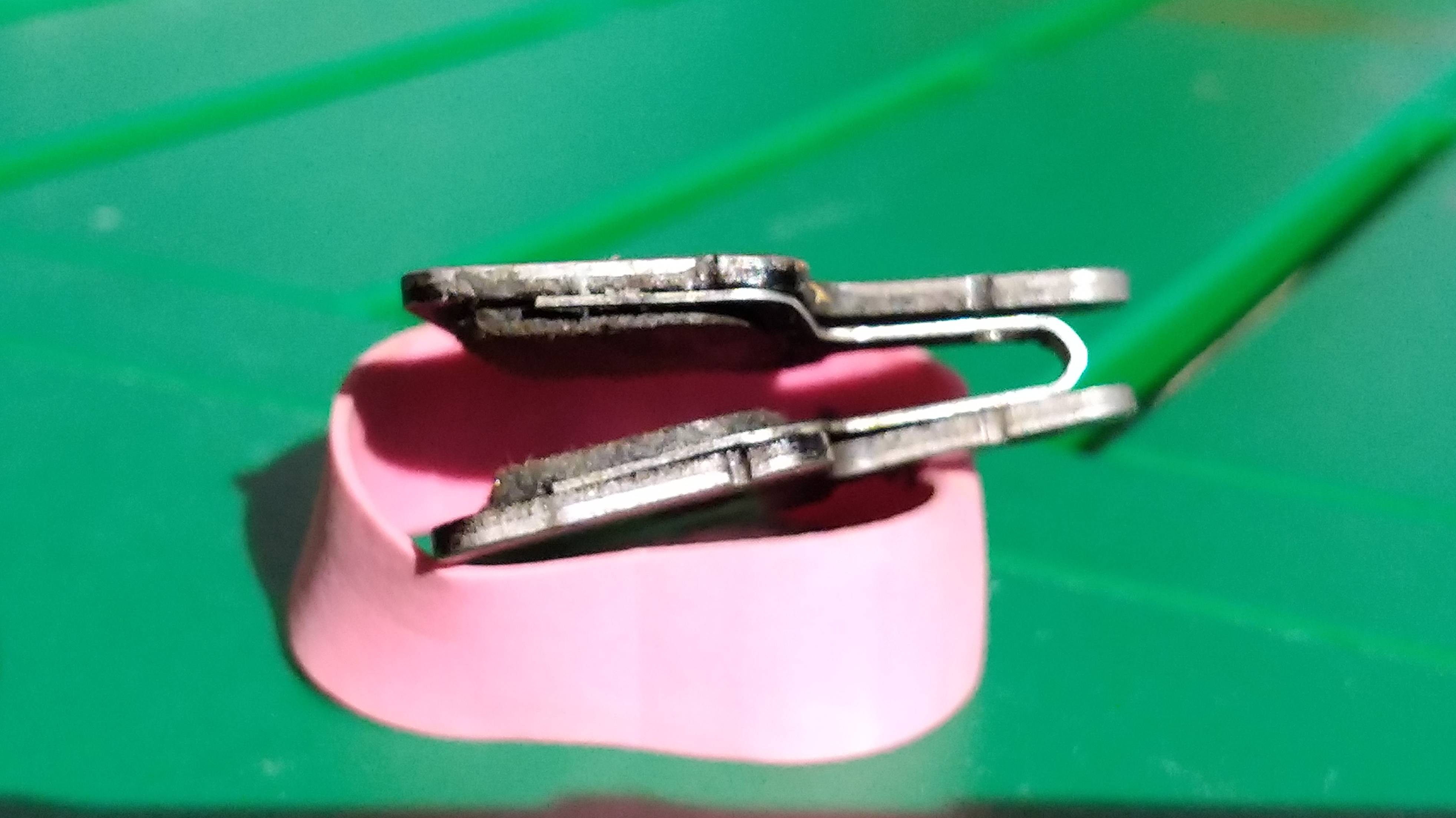 Notice the top pad is much more worn (that's not just a trick of the light), such that toward the neck of the clip it is down to the clip itself.

I guess I have to replace these, but do I also have to replace the brake? It's obviously been doing this for a while. Have I put in too much oil (I don't really see how that is possible, but...)? The handle is currently a bit soft (much softer than the other, identical one). Basically this reminds me of a sticky or misaligned V brake, but there doesn't seem to be anything I can tweak with this. Reducing the pressure would make it unusable, and I don't even think it would help the actual problem.

The part that popped out is one of the pistons.

There should always be a bleed block in place between the pistons when bleeding the brake. Immobilizing them this way is what prevents overfill and also prevents the pistons from popping out if you go to squeeze the lever as part of part of the bleed procedure, both of which happened here.

Excessively narrow pad gap is the main symptom of overfill.

Bleed them again with the block in place and everything should be good.

The piston that came out probably went back in clean and lubricated, while the other one remained however it was. That kind of thing can cause uneven pad wear and adjustment weirdness, as one piston moves more readily than the other. You could try addressing it by intentionally overextending each piston in turn and then cleaning them with a cotton swab and alcohol. Removing them all the way isn't necessary.

To add to other answers, there is a great video by Park Tool published recently, explaining the hydraulic brake pistons. They explain accidentally blowing them out as well as their cleaning process.

Prevent "sticky pistons" by cleaning and lubing the pistons every time you change pads. We talk a bit about how the brake functions and walk through the cleaning procedure to help your brakes in the long run.

Not the answer you're looking for? Browse other questions tagged shimano hydraulic-disc-brake mechanical or ask your own question.