I had an unplanned collision with a car yesterday (everyone is fine, thankfully) but my bike – a Giant Revolt 1 – now has a lovely new pair of dents.

I cycled it home from the collision (~6km) and it seemed “fine” although I was probably still in shock.

Looking at it today, and having looked at several other questions regarding dented aluminium frames, I’m trying to ascertain what the most likely failure is?

Is this frame likely to continue degrading/cracking over time (i.e. I might get several more months from it)?

Or is it more likely to fail catastrophically and fold in on itself?

I exclusively ride on paved roads although there are often small potholes. 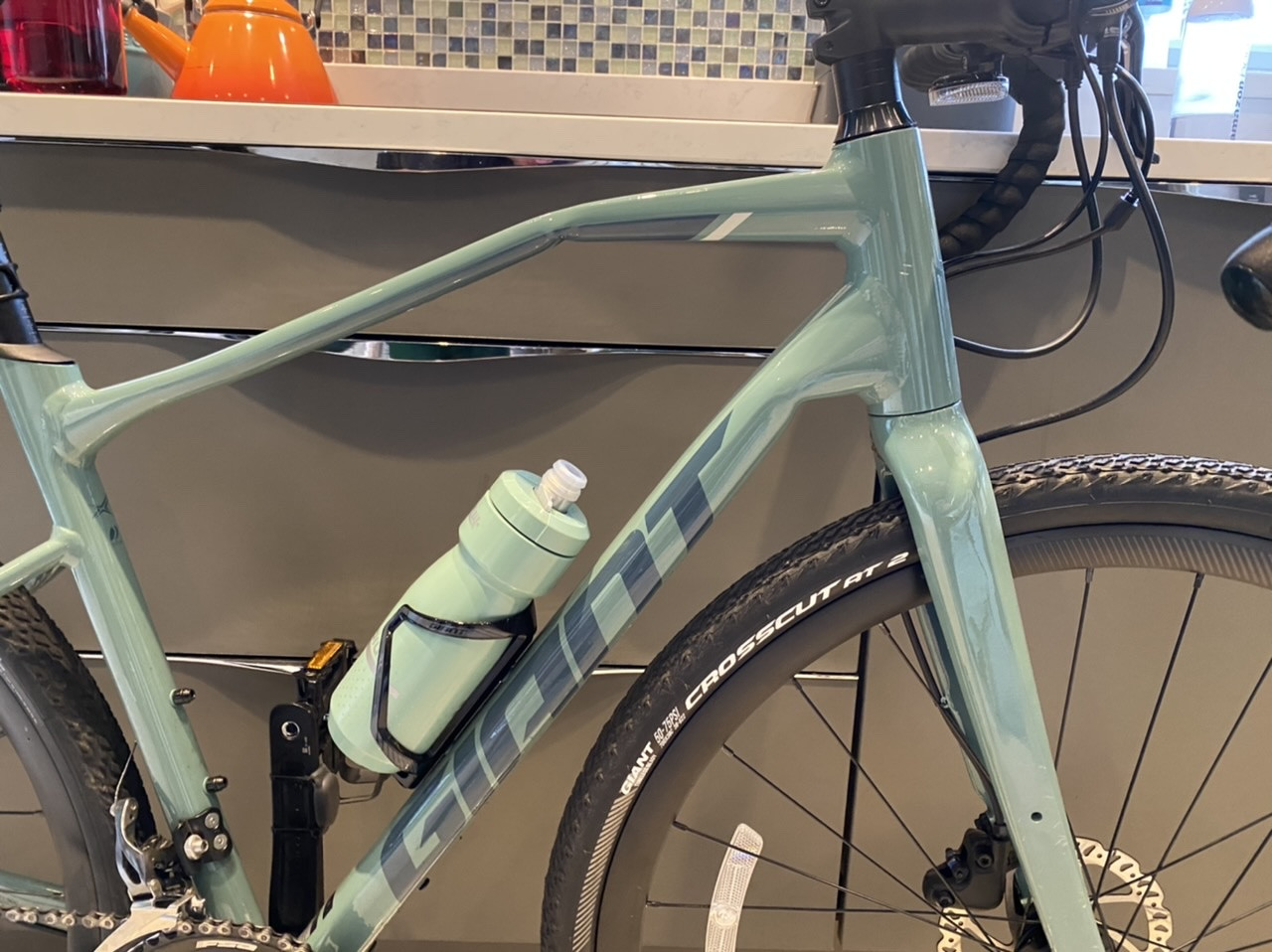 Sorry. It's not going to fail, it has failed. It's no longer ridable. The head tube is near vertical making the steering very unstable and the front wheel has been pushed back and will overlap with your toes. The frame tubes are not dented they are buckled and severely weakened. If you ride it the frame will catastrophically fail (either when you hit a bump or brake hard) resulting in a nasty crash.

I hope that if the car driver was a fault you got their details.

Oh, that frame is done. It’s not worth saving a few hundred bucks now and spending thousands in the hospital later.

Make sure to check over the rest of the bike, especially the fork. It might have cracked from the impact.

The problem with aluminum is, that it tends to break abruptly. Aluminum can bend under pressure, but it does no stretch significantly under tension before being ripped apart. You get no warning, you simply get a tube or two breaking apart. In this, aluminum behaves much worse than steel which is known for plastic deformation under tension, long before breaking.

With your frame, the failure mode would be that the down tube suddenly breaks off. Riding your bike puts this tube under tension, and tries to unbend the already weakened area. The vibrations from riding are likely to quickly trigger cracks to form, and soon the downtube breaks apart at the buckle area. This will suddenly place the entire load on the bent top tube alone, which will likely immediately break apart itself. This may happen in the fraction of a second at any time. Effectively, your bike would vanish from beneath your butt, leaving you to fall onto the road at speed. Face down.

If you value the look of your face, don't ride this bike a single meter.

You don't really have a "frame" anymore. I am sure you can deform it visibly with your bare hands just by pulling the two wheels together. You don't have to believe me, just try.

The same happens as you ride. The bent metal is not rigid anymore, it "works" and deforms near the dents.

But the material was never meant to work by deformation, it is not a spring (and even springs sometimes break). It will develop cracks, more cracks, deeper cracks and will ultimately break.

Chalk it as "shit happens" and send it for recycling. And count these 6km as "lucky". If it was for 6km, I would walk them.

Two things not mentioned in the other answers:

also, don't trust people on the internets, none of them will come and take care of you later. :-)

Safety wise, the entire bike is now a write off, The pro's would say that other parts of the frame can now crack unexpectedly after such a shock.

Personally I would do a 1 day repair using carbon fiber. you'll have to cut the top tube to bend the whole thing straightish.

Use more carbon fiber than this image, about 5mm CF wall thickness. 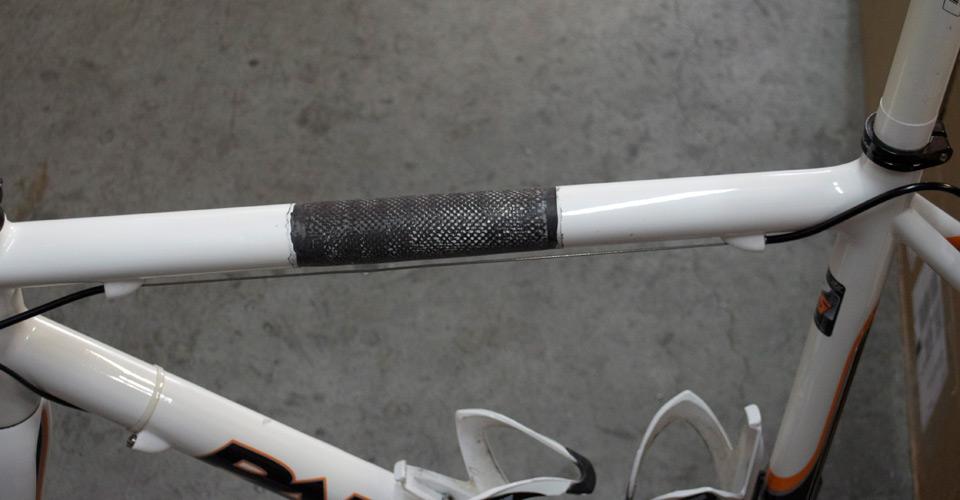 The advantage of carbon fiber is that it doesn't undo the crystals in the aluminium frame, because the entire frame is heated to 400 degrees and left to cool in high-spec ASTM standards.

Carbon fiber also costs 25 dollars, and it is stronger than a weld and than steel, but it will add 500 grams to the bike.

I have fixed a cracked aluminium frame using carbon fiber, it held up fine for 3 years until the suspension bearings wore out (centurion, german bike)

The problem with epoxy-carbon bonds is that they can be unstick, you have to research the best epoxy for aluminium, and perhaps treat it with acid first to take off the oxide, even after brusing it, and straight away after the acid is removed, put on some epoxy resin, and afterwards wrap it in carbon, then when it's all wrapped, heat it over a radiator for a few hours to waterproof the epoxy. Total work time is about 3 hours, one hour to prepare the frame, one hour to wrap the epoxy and carbon.

You have to make some dents and grooves in the frame to ensure the epoxy grips the frame like steel. 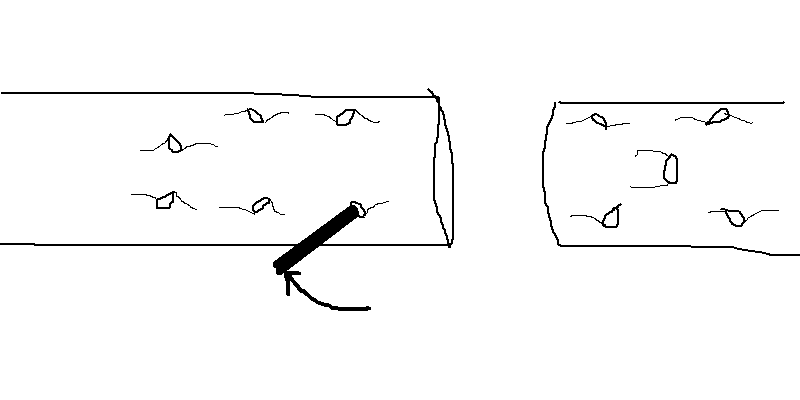 Not the answer you're looking for? Browse other questions tagged frames damage aluminum or ask your own question.