Will running an LED designed for batteries on a NEXUS dynamo hub damage the LED?

I have a question about LEDs on 6V Shimano dynamo hubs. I built up an old Schwinn with a Nexus dynamo hub, and the headlight I'm using is based on an LED 6V headlamp. The LED is a Chip-on-board design, and I've wired it directly to the two terminals on the hub without using the frame as a ground. I have the pulses set up to alternate between the headlight and the tail lights. The light works great, but I wasn't aware that the Shimano dynamo is putting out reverse-polarity pulses as well as the ones properly oriented to light the LED. Is this bad for the LED bulb? Will it burn out prematurely because of the reverse pulses?

Reverse pulses at low voltage probably won't damage the LED, but the COB (chip on board) that gives the flashing modes might not be able to cope with the full reverse voltage.

The problem is that the hub dynamo is more accurately a constant current source, and will supply about 500mA. One common trick is to run two 6V lights in series off a hub dynamo, and most dynamos will give full brightness from both... they put out 12V. The actual voltage you get out of it might be clamped by a zener, but it's unlikely to be a 5W zener that can take the full power of the hub forever. Not that you want that anyway, it's extra drag.

I have run bare 5W star LEDs straight off a SON hub dynamo (well, with a diode and capacitor to reduce flickering) because they're designed to take 500mA and that's what the dynamo supplies. It worked really well, just using a chunk of aluminium channel as a heat sink/weather sheild/reflector. I don't really know about longevity, after ~10,000km/a year or so I got a proper light cheap so switched to that.

So if your 6V LED is actually a 1W light it might be getting 12V or more. Whether it survives that is anyone's guess. Worse, even a 5W light is likely to be getting +6V on that half of the wave, then -12V on the other half when it's not drawing any power. I suggest a basic diode or bridge rectifier in series, capacitor in parallel to give you DC.

LEDs don't like negative voltages. They generally fry at some 3x-5x their normal forward voltage.

Then again, you don't have a bare LED, but a LED and a LED controller and it is the controller that is likely to suffer first. The bad thing is, we don't know much about it.

Another bad thing is that the 6v hub is actually 6v when properly loaded w/ 6V, 3W bulb. Otherwise it can go very high, like 50V.

You'll get prettu much extra complexity if you try to do the proper thing.

You can as well opt for a simple & stupid solution like hub => bridge rectifier => 1.5W white led (bare, without controller). It will behave almost like a bulb, except for the brighter light and about half the drag.

6v is probably low enough to not damage the LED, but you might be vulnerable to a voltage spike. You could use a regular diode in series to help protect the headlight.

I think the best solution is to get a light built for that particular hub. That way I can be sure that it's engineered to work properly with that system. It's a shame--that light looks so good with this bike. 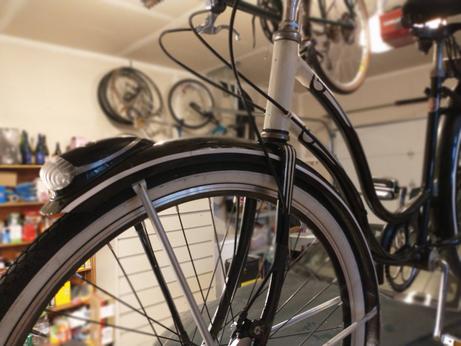 Not the answer you're looking for? Browse other questions tagged shimano dynamo or ask your own question.

1
Grip for Shimano Nexus hub gear shifter
3
Can I swap a shimano free hub body for a campag one and be able to attach it to the existing Deore hub?
2
Checking that the dynamo hub works
4
Dynamo bike lights - unknown short circuit cause
4
How do I tighten the loose chain given an enclosed Nexus rear hub?
2
How to choose the light bulbs for a given dynamo
3
Should I upgrade the hub, cassette or wheel so my bike will make a sound when I don't pedal?
1
Can any dynamo hub get the electricity rotating with the spokes?
2
Occasional chain slipping/skipping - is it possible for the hub to be at fault?