Cause of broken spokes (pictures included)

I never had this problem before. Two spokes on the drive side of my road bike's rear wheel broke at the J bend, and I'm trying to identify the cause. The wheel has 32 spokes total, made of steel, laced in a 3 cross pattern, and each spoke has a width of 2mm across all its length.

The first one broke when I accelerated hard at a green light, and the second one when I got home and squeezed the spokes with my hands to check their tension. I assume they were fatigued/damaged beforehand, and the rest of them are too, which will keep breaking if I continue to ride the wheel.

I didn't do any jumps, and I weigh 68kg (150 pounds). But I did lots of climbing (which shifts more weight to the rear wheel), descending (which puts lateral stress on the spokes when leaning into corners), accelerations, and some occasional gravel riding. The 35mm wide tires were always inflated to 65-85 psi.

1000km ago, the wheel got slightly out of true (2mm at most) after being ridden for about 1500km. So I trued the wheel, adding a bit more tension to the spokes at the same time. I don't have a tension meter, but it seemed pretty tensioned, similar to the other wheels I have now or had in the past (not all of them built by me) which never had any issues. The wheel remained true until the spokes broke. 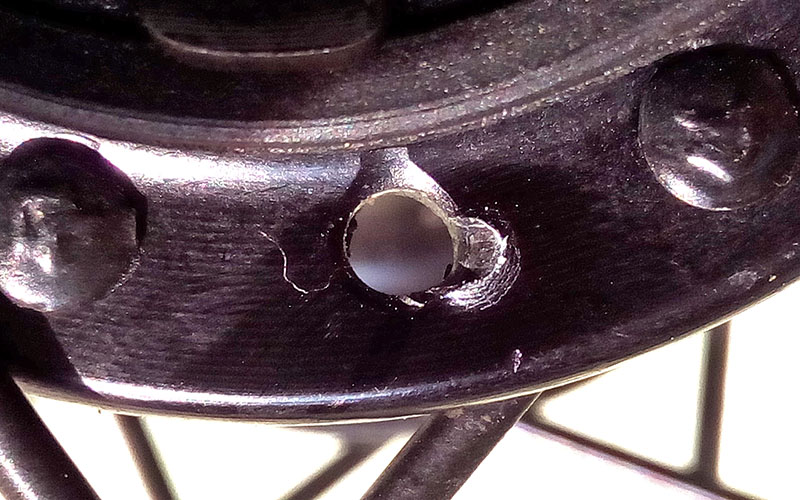 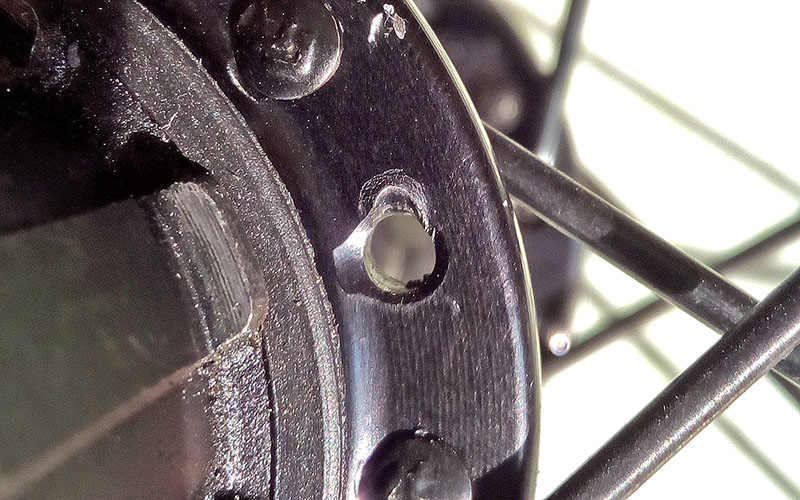 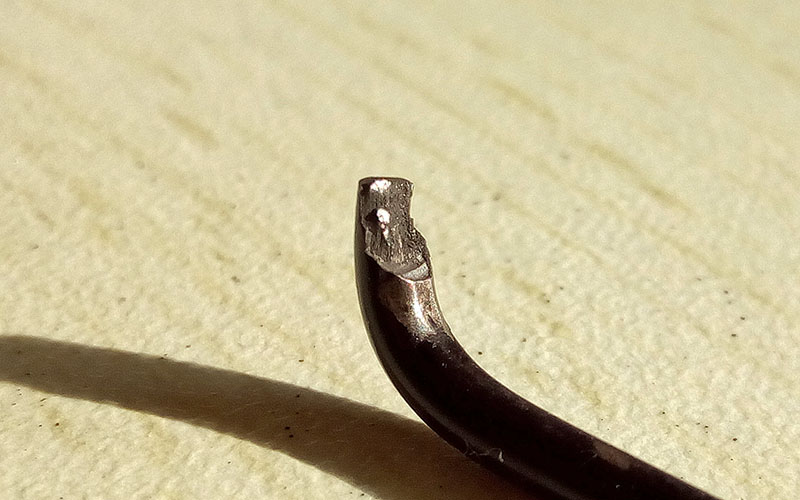 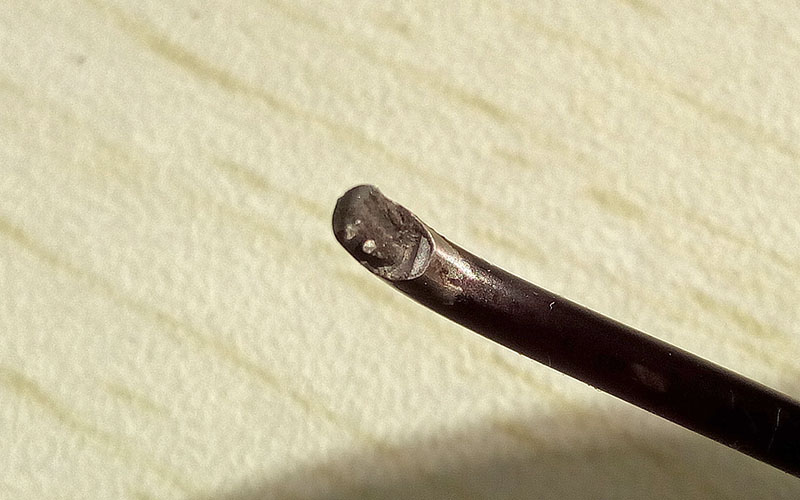 The grooves/enlargement shown at the hub are all normal.

The path to a wheel that doesn't break spokes is use premium quality spokes (DT, Sapim, and Wheelsmith are the usual poster children), set their line properly at the rim and hub, and stress relieve them properly during building. Fatigue breakages are almost universally the result of one or more of those things not happening.

Setting the spoke line is when in the early phases of building a wheel, the bends are manipulated to neatly wrap around the hub flanges, so that the bend area itself isn't floating unsupported. Stress relief is when the spokes are intentionally overloaded in tension to eliminate residual stresses at the bends that remain from forming them. If those stresses are left in place, the fatigue limit of the material can be crossed in those areas with the cyclic loading of the wheel from riding, which leads to failure. Spokes otherwise operate under the fatigue limit of the material, hence a well-built wheel being able to rarely or never break spokes in fatigue. (This is a paraphrasing of the explanation offered in "The Bicycle Wheel" by Jobst Brandt. It's proven true for me and many others. There is a lot more written on the subject on this site and elsewhere.)

It's likely that what happened here is your spokes were picking up fatigue at the j-bends all along from not being stress relieved and/or having their line set, and then increasing the tension exacerbated the problem, hence the breakages soon after. Increasing tension on a wheel that needs it is not a bad idea per se, but it does run this risk, especially since undertensioned wheels have a good chance of also having the above problems. Stress relieving once a wheel has been used extensively doesn't necessarily work because accumulated fatigue will have weakened the spokes some amount.

Fixing the wheel with its existing spokes may not work, because you have reason to suspect they've been heavily fatigued. The main paths to making it reliable are either rebuild with new spokes or replace it entirely.

Another common cause for spoke breakage at the J bend is low spoke tension, or preload.

As you ride, the bike momentarily "hangs" from the topmost spokes on the rim. Because its a dynamic changing system, this load hands off to the next spokes around quickly.

So every wheel revolution, a spoke is pulled tighter and then relaxed.

If the spoke is not tight enough, it will stretch turther when loaded, so the total deformation is greater. When the spoke is tighter, the spoke suffers less total change in each turn of the wheel due to preload taking up some of that.

Upshot, the spoke fatigues at the J bend, and this movement contributes to erosion on the hub's flange.

Solutions You need two new spokes minimum. I'd recommend giving each pair of spokes a good squeeze and see if any more break. I would expect more to break over time too so buy at least 6 spokes. In your case, this wheel was never properly tensioned so I'd also suggest adding about a quarter-turn onto each spoke nipple.

It is possible to fit a small/thin washer under the head of the spoke to spread the load, and this would be wise as you replace spokes.

There's also some suggestion that once a wheel has X spokes break that its dead and needs replacing. Often 3 is a quoted value. Personally I've repaired a couple of wheels that need up to a dozen spokes over time, and that has worked out fine. YMMV

The hub holes are elongated a little bit but I would not be concerned. It seems to me a pretty typical amount of deformation. I would reuse the hub but I would re-lace the hub with the same pattern.

It's hard to say why the spokes failed but unless it happens repeatedly I would chalk it up to poor quality or defective spokes, or spokes that got unevenly tensioned or stressed at some point in the past. I would rebuild the wheel with all new name-brand spokes like DT, Wheelsmith or Sapim. If it happens again then something else might be going on. Normally a 150lb rider should be fine with a 32 spoke wheel if it's well-built with good spokes.

The wheel has 32 spokes total, made of steel

I hope it's stainless steel. If not, you have an opportunity to replace the spokes with stainless ones.

each spoke has a width of 2mm across all its length.

If you decide to replace the spokes, replace them with 2.34mm - 1.8mm - 2.0mm triple butted spokes such as DT Swiss Alpine III (note it has to be Alpine III as the regular Alpine is 2.34mm in midsection which is a really poor choice).

The idea is that the 2.34mm bend is very strong so the spokes do not break there and the 2.34mm bend can be supported at aluminum hubs in a better manner. The 1.8mm midsection is elastic, distributing the rider's weight over a larger number of spokes due to the elasticity. The 2.0mm threads are compatible with regular nipples.

At the same time, use DT Swiss Pro Head nipples. They have a spherical seat as opposed to a conical seat, better supporting the load of spokes that are at an angle.

I don't have a tension meter, but it seemed pretty tensioned,

If you plan to replace the spokes, a tension meter seems like a good idea, but do note that not all tensiometers come with a tension table that is valid for Alpine III spokes. I usually set the tensiometer reading to halfway between what is optimal for 2.0mm midsection spokes and 1.8mm midsection spokes. The tensiometer reading is a number that has no meaning without the table. So I essentially look at the table for 1200 N to see what the reading would be for 2.0mm spokes (example: 45) and for 1.8mm spokes (example: 55) and then use the reading halfway between those (in this example: 50). I understand that a DT Swiss tensiometer would come with a table valid for Alpine III as well, but might cost a lot.

I think it's doable to replace the spokes. Because the spokes have modified the spoke holes in the aluminum hub, be sure to install the new spokes in exactly the same orientation as the old spokes. Otherwise the hub will be weakened even more.

And before you do anything, purchase "The Bicycle Wheel" by Jobst Brandt. You need to properly stress relieve the spokes in the wheel to get a durable wheel.

5
Lots of broken spokes on one bike, with different wheels
0
New wheelset, spokes losing tension
5
Spokes keep breaking
3
Tightening straight spokes
4
Why would spokes break at the flange early?
6
Spoke max tension
1
Replacing multiple spokes (9/36): more like replacing spokes or rebuilding a wheel?
3
Why would non-drive side leading spokes break?
4
Is it common for the left side spokes of a front disc wheel to have more tension than the right side spokes?
10
What can cause wheel spokes to snap in the middle?