In the summer I bought an e-road-bike that has tubeless-ready rims. I wanted to change the tires to better ones, so I bought a pair of Continental GP 5000 (non-tubeless) 28mm tires, and installed them on to the rims.

It was a very hard job! I even punctured one tube in the process.

I mounted a GP 5000 28mm tire on the replacement wheel, and it was very easy!

There is always the potential for tolerances to make a particular tire, rim, or combination hard to mount.

A rim being tubeless or not per se does not dictate how hard it is to mount a tire on. Tubeless rims aren't made tighter, i.e. their target diameter for the bead is not a larger number than non-tubeless.

There has always been a cat and mouse game in cycling where no manufacturer of tires or rims wants their parts to be subject to tires blowing off. So sometimes they make decisions that nudge things in the tighter direction; ie smaller bead seat diameter for tires and bigger for rims, and truly difficult mounting situations can result. You can find some tubeless parts that show this phenomenon, but it's not categorical to tubeless. It's probably less common if anything if I had to guess.

In practice, almost all problems people have mounting tires on to tubeless rims relate to them not being deliberate enough in getting the beads sunk in the middle well of the rim. Doing this all the way around is how you make the final tight spot easy. This has to be done on purpose with tubeless rims in a way it didn't so much before.

If you gathered data you might find that tubeless rims had a larger BSD on average and are harder to mount by that definition. Or, you might find that the tighter tolerances are working in both directions, and average BSD is the same. That data doesn't exist. Another definition of which is harder to mount is for which type is it more common to encounter a rim with a BSD that's simply too large and has to be brutally fought to get a tire onto. In my experience that would be non-tubeless, presuming one has good technique with tubeless center wells, as above. I very rarely have that struggle with tubeless rims.

You'll read that Conti road tires err tight and there may be some truth in that, but only to a marginal effect compared to the difficulties you'll encounter if you don't do the above.

@NathanKnudson already mentioned the well in the middle of tubeless rims. This merely illustrates why it's necessary to use that well. The picture below is from Slowtwitch.com. 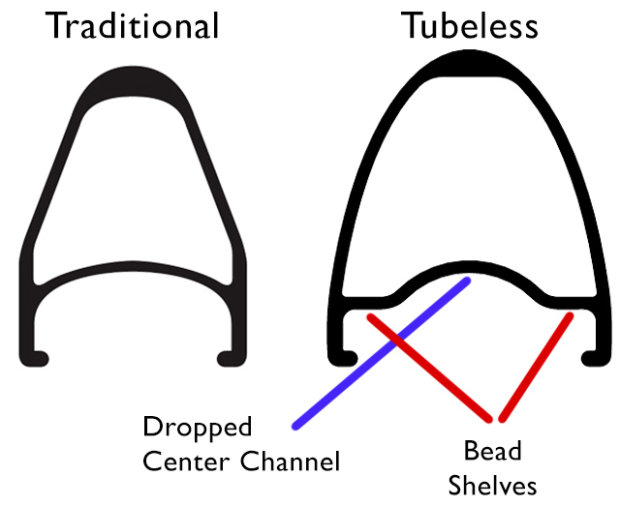 For readers not used to tubeless rims, the well or center channel has a narrower diameter than the rim's bead shelves, where the tire beads sit when inflated.

When I mount the first side of a new tire, I get that side's bead in the well. Then I work the other bead across the rim's sidewall. If I get stuck, I go around the rest of the tire and make sure both beads are pushed into the well, then I return to the bit of bead that I couldn't move earlier.

I don't follow rim standards closely. However, in 2020, the ERTRO clarified the bead seat dimension and tolerance for tubeless rims at 621.95 +/- 0.5mm. I'm not sure what the standard and tolerance was for non-tubeless rims. I recently listened to a Cyclingtips podcast (which I believe but am not 100% sure is this one) where, if I recall correctly a wheel industry engineer did say that before the above tubeless standard was adopted, some rim manufacturers may have made their rims with slightly higher than normal BSDs to give tight fits. For example, I think I recall that many Stans rims were reputed to be tight, and I owned a pair of Pacenti SL23s which had a similar reputation. Similar issues do exist on the tire side as well. I have heard, as he alludes to, that Conti tires are relatively tight on average. Last, I don't know what the official BSD dimension and tolerance was for non-tubeless rims. Specifically, I don't know if the mean dimension was smaller than 621.95mm, or if the tolerance around the mean dimension was larger, or both.

Typically yes, but I am sure there are edge cases (read poor manufacturing tolerances) where this isn’t the case.

In order for tubeless tire setup to work you need tight tolerances as the bottom of the tire bead needs to be in firm contact with the rim bead seat in order to make a firm seal. As such the bead seat diameter (BSD) should have less variability and be closer to specifications.

Regular non-tubeless rims are not under such tight constraints. Manufacturers often undersize the rim (or have less concern about batches that are slightly undersized). Depending on who you believe this is done in to make mounting non-tubeless tires easier or to ensure good batch yields - no one will want to release a rim that is out of tolerance and too big as no one will be able to use it and it would become a warranty nightmare.

Of course this isn’t a complete universality, as there have always been tight tire rim combinations (when tolerances collide) long before tubeless, but with the tolerance improvements we are now consistently closer to the true BSD specification making tire fitting a little harder.

As other mentionned, I think tubeless wheels have tighter tolerance but that center channel makes it much easier to fit tires. From personnal experience, not every wheel has the same center channel design, some of them are really shallow, some of them quite deep (actually this can make taping more of a chore). Personnaly, I find it easier to mount a tire on a tubeless rim than a non-tubeless thanks to that deep center channel. I would say like @Rider_X though that the tire/rim combo has more to do than tubeless/non tubeless rims.

My experience with GP5000s is that they are a tight fit no matter the wheel (a friend of mine also puncture a tube everytime he puts them on). Of course, older tires will go on more easily, so maybe this is why it was easier to mount the second time. I find that having a smaller tube makes the job easier. Say 20-28 inner tube is easier to fit than 28-45

Not the answer you're looking for? Browse other questions tagged tire rims tubeless tire-lever or ask your own question.

215
Terminology index - a list of bike part names and cycling concepts
0
How to select a rim?