I have Shimano 105 7000 groupset on my bike. 2x11. For some reason I have 3-rd in-between click on my front derailleur. To get into that 3-rd position I need to shift into large chainring and then apply reduced pressure on FD lever. Amount of force should be just below chainring change threshold. If I do that - I get a smaller click and FD moves ever so slightly towards the smaller cog. If I don't do that - when I'm on bigger sprockets the chain rubs a bit and shifting RD becomes much more stubborn.

The question: is this by design? Seems strange but understandable. If so, what are some pros and cons of this?

If your derailleur is properly adjusted, after you shift the front derailleur to the low-gear position, it will have a position somewhat outboard that can be reached by pushing the brake lever somewhere between 1/4 and 1/2 the way to full shift.

And as you've discovered, there's a "high trim" position that can be reached by applying light pressure to the small shift lever to move the derailleur slightly inboard from its "high" big-gear position.

Those two "trim" positions allow cross-chaining capability without the chain rubbing on the front derailleur cage.

This adds a small amount of detail to Andrew's answer.

I generally stay in the big ring on my road bike (52-36). If I wanted to be in the big ring and the top two cogs, the chain would start rubbing the derailer cage. I would shift to the high trim position to ameliorate this. The exact cog where the chain starts rubbing the derailer cage may differ on your own bike. In my experience, when the chain rubs the cage, it should be audible to people with normal-range hearing unless you are on rough terrain or you are in the middle of a maximal effort. 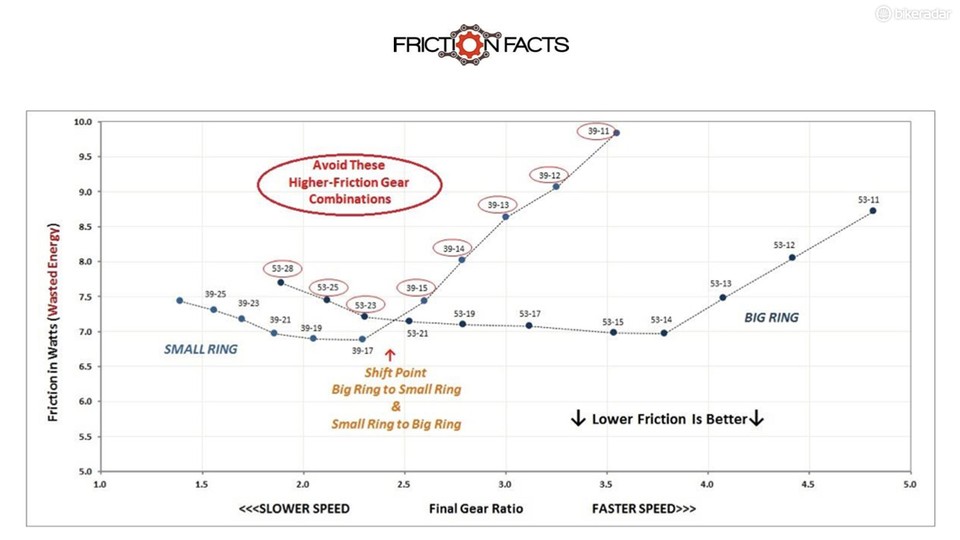 The image above, which enlarges if you click on it, comes from Friction Facts, which was an independent outfit run by Jason Smith in the early 2010s. Smith was hired by Ceramic Speed, which sells very expensive ceramic bearings and other racey things. I believe CS may have bought Friction Facts' intellectual property wholesale. Some Friction Facts reports may still be extant on the Internet. The graph was reproduced from a Bike Radar article.

The test showed that in with 53-39 chainrings and an 11-28 11s cassette, once you are in the big ring and the third biggest cog, you are actually better off shifting to the small ring and an equivalent cog. The x-axis is the gear ratio (higher = harder gear). The y-axis is drivetrain friction measured on Friction Facts' test rig. It is likely that drivetrain friction is proportional to chain wear. A different test using slightly different gearing published by Velonews backs the trend up (NB: the test was also conducted by Jason Smith, although he was working for Ceramicspeed at the time.)

Fortuitously, my drivetrain is just a bit noisier in the 3rd from largest cog. It is not necessarily a cue I might notice in the middle of a race, but on most rides I am able to perceive the difference. In any case, once I can hear the increased noise, I know that I should either shift to the small ring immediately, or the next time I want to downshift.

Naturally, there are times when tactical considerations might lead you to remain in the big ring. You might have just a short section of the climb left and you might not want to disrupt your rhythm. Your chain is not going to explode. You may not think that the 1.something watt differential between the 53-28 and the 39-21 gear is worth it, and you probably won't wear the chain down unless you ride in that combination all the time.

Use the small ring for climbs

In any case, the low trim position would let you be in the small ring and a small cog without chain rub. However, consider the friction differentials in the graph - there's now a very large difference in drivetrain friction, and I presume chain wear as well. I would strongly recommend not being in the small ring and a small cog. Personally, when I've tried this with my smallest 2-3 cogs, I've found that the low trim position doesn't eliminate chain rub anyway. In any case, this is why the sub-lede of the BikeRadar article says

Staying in the big ring is faster – most of the time

Generally, it's accepted that the tighter a chain is articulated around a cog or chainring, the higher the friction (i.e. small cogs/rings = higher friction). The more a chain is articulated side to side (i.e. cross-chained), the higher the friction. It's possible the crossover point (where you should ideally shift chainrings) may differ in some drivetrains.

If you compare the BikeRadar graph to the double chainring setup in the Velonews graph, you'll see that despite the different cassette, the crossover point looks similar. However, both tests used 53/39 cranks, i.e. older style road cranks with a 14t gap between rings. Modern amateur riders likely have cranks with a 16t gap between rings. (SRAM AXS groups have smaller gaps, usually 13t.) Generally, a bigger gap between rings would shift the entire friction curve for the small ring further up relative to the big ring's curve. I have not seen empirical data with other front chainrings. You could likely still use the 4th or 3rd largest cog as your crossover point and not go too far wrong.

Not the answer you're looking for? Browse other questions tagged derailleur-front or ask your own question.