It's a no brainer, right? Yet a comment links to a blog post claiming to have scientifically proven there is no significant effect. It looks solid but is not a paper in a peer-reviewed journal.

What is the current understanding of rolling resistance of a slick tire on pavement?

is very far from comprehensive, but it reports rolling resistances for two pressures (2 and 4 bar - 200 and 400 kPa) for wider tyres. Of them, Vittoria Radonneur could be considered reasonably slick. They report slightly higher speed and slightly lower rolling resistance, but with a large uncertainty, with 2 bar on 5.9% road slope. The uncertainty is larger than the difference 12.6 ± 3.4 N at 2 bar vs. 13.5 ± 2.2 N at 4 bar. Be aware that this is the force, not the power required to overcome it at the given speed! The study did not really concentrate on the effect of inflation pressure and they conclude that the difference is not statistically significant. Interestingly, the idealized measurement in the link I already gave say "When using these tires, you should monitor air pressures very closely. Don't let these drop under 60 psi EVER.". (60 PSI is 4.1 bar)

It found that for two tyres (23 and 28 mm) the rolling resistance decreased uniformly with the inflation pressure. For the third tyre (22 mm) the lowest inflation pressure was achieved at 6 bar (600 kPa) and then it rose slightly. I stress again that this was not on the tarmac but on a smooth treadmill.

Very comprehensive measurements of various tyres with several different inflation pressures are regularly published by https://www.bicyclerollingresistance.com . They test a single wheel in a dedicated machine on a rather idealized surface. The rolling resistance mostly uniformly decreases with the inflation pressure in these conditions although the curve is often quite flat at higher pressures. 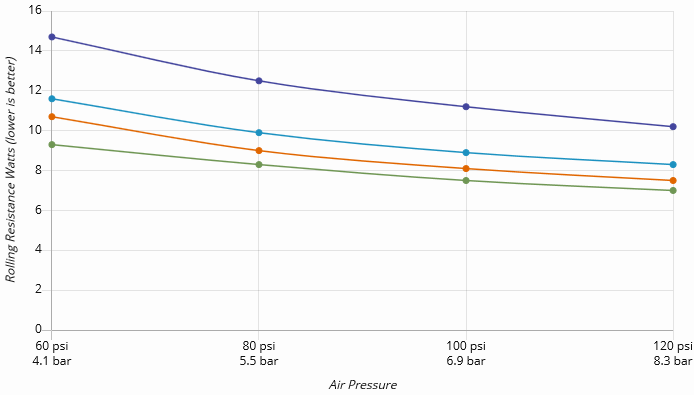 An example of the dependence of the rolling resistance (as a power required) to the inflation pressure on the idealized test bed of https://www.bicyclerollingresistance.com for four road tyres.

However, a study by SILCA indirectly mentioned in the comment by R. Chung considers real asphalt concrete surfaces and found that the suspension losses/transmitted losses/impedance are quite substantial at higher pressures and cause turning of the resistance curve upwards. It isargued that a tyre that is "too hard" suffers from high resistance when overcoming and jumping over the small bumps that create the tarmac surface.

A schematic explanation by SILCA, more in the study: 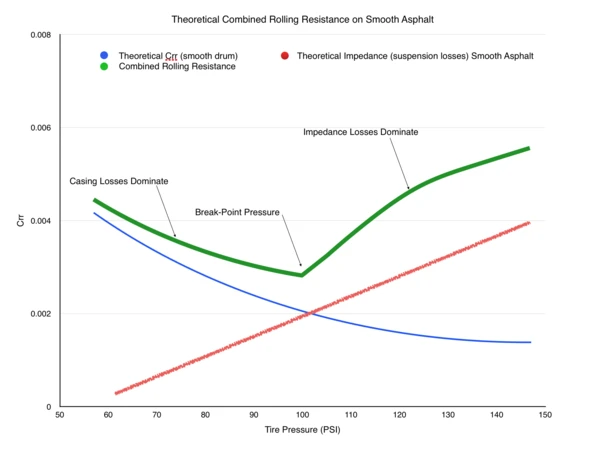 Not the answer you're looking for? Browse other questions tagged road-bike tire-pressure or ask your own question.

14
Does the use of front suspension negatively affect road riding efficiency?
12
How much energy is lost with a gravel tire compared with a road tire?
8
Choosing good slick tires for a MTB
2
Does anybody has a chart or table of the rolling resistance vs tire pressure for a MTB tire?
2
Is cyclocross tire (CX) taller than normal road bike's?