Does a standard exist for race boundaries?

For the record, I'm not defending Peter Sagan. His leaning is aggressive. I'm also not here to debate the level of accepted aggressiveness among sprinters. I find the (lack of) standard for building fences to be laughable, and I'm wondering whether such a standard exists, for cycling, marathons, or relevant other sports.

The photo above is from this video at Second 31. This image and video excerpt do not quite represent the true initial point, because if you look at the beginning of the preceding day video, van Aert (wearing the yellow jersey) had already shifted to the right of the white line. Hence Sagan (Bora white jersey, near the edge) may have initially estimated that there is a hint of space to power through on the right.

Suddenly, as you can see at Second 36 of the same video (picture excerpt above), Sagan does indeed seem to lean inside, shouldering and elbowing his way.

But any rider facing a collision with the sign post (E. Leclerc in the image above) would have the same instinctive reaction.

Possibly Sagan was already "flagged with a yellow card", following his elbowing Mark Cavendish in 2017. The referees were not about to let him get away so easily. Even if the Leclerc post offered an excuse, they didn't want to seem lenient.

It's easy enough for a cyclist to fly over a thin strip of land, but substantially more space is needed for the handlebar, the elbows, and the shoulders. 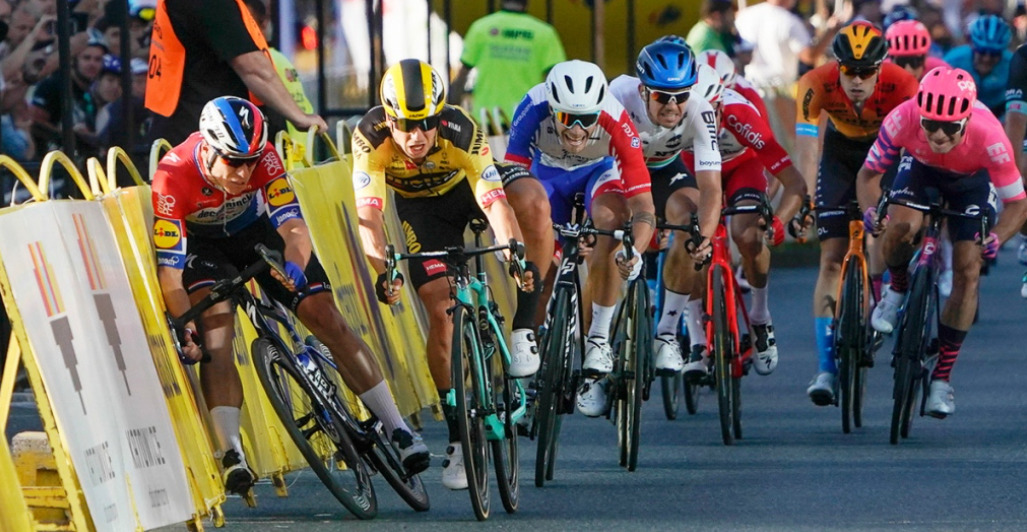 The segments of the fence at the Tour de France appear to at least be attached to one another. Judging by the very serious accident accident sustained by Fabio Jakobsen after being pushed, from the inside-out this time, by Dylan Groenewegen, the fences at the Tour de Pologne have a basic weakness: The segments are not attached to one another, and a spectacular failure is possible (see picture above; source).

The severity of Jakobsen's collision means that Sagan is ever-so-slightly excused for panicking from the prospect of a collision. Once he has committed to overtaking van Aert, the only other option he had was to brake to go behind van Aert, but that's also not "something that is done" in a sprint.

It would appear then that part of the fault, perhaps a major part, is that no one designed a standard (ISO, ANSI, DIN, ...) for building fences in cycling races, especially for the last 100-200 meters.

I imagine the following requirements:

Does such a standard exist, for cycling or for any other sport?

A car racing up or down the side of a mountain might be at three or more times the speed of a cyclist, but there is usually a clear border that spares the rider from a catastrophic chute. Do cyclists who reach 60 kph so easily not deserve to have a safe fence, at least during the last stretch?

Browse other questions tagged safety tour-de-france uci or ask your own question.

2
What are criteria for a team to get UCI World Tour license for the next season?
0
When in a UCI race, does the helmet have to be to be fitted properly
8
Attacking during a race when your competitor has a mechanical failure?
7
Waiver for medication during race?
9
Why does the Tour de France have a minimum weight limit on the bicycles?
13
TdF: How does putting one team member in a break away help the rest of the team?
3
Are there rules for how many riders can be in a World Tour team?
2
How are the stages accumulated at the Tour de France?
5
What's the idea behind the no-feeding-in-the-last-20-km rule?
1
Broken fork bearing crown race stays