Which kind of crank arm for my bottom bracket 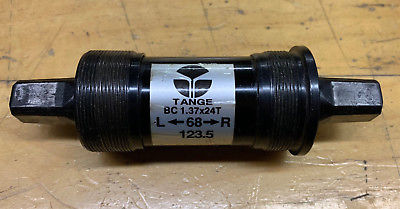 It is correct that you've got an 'English' or 'ISO' threaded cartridge bottom bracket; this refers to the interface between the BB and the frame. But you also need to consider the interface between the BB and the cranks. This has what is called a "square taper" spindle, and because the bike world is filled with competing standards, there is more than one standard for square tapers (which determine the angle of the taper and how wide it is at the seat). It looks like Tange BBs use a JIS square taper, which is widely used. So you would look for cranks that have a square broach in the middle, and that specify a JIS square taper.

But here's where we run into trouble. This kind of bottom bracket, where the spindle is separate from the cranks, is an arrangement called a "three-piece crank" and was used on all midrange and high-end bikes up until about 20 years ago. Today, most high-end cranks are based on a "two-piece crank" design, where the spindle is permanently bonded to the drive-side crank (this is lighter, and because these use larger spindles, they're also stiffer, although that may not provide any real-world benefit to most of us). As far as I can tell, all power-meter cranks are based on two-piece cranks, so you can't use this bottom bracket with one.

So if you are set on your plan of using a crank-based power meter, you'll need to replace the bottom bracket with an English BB designed for two-piece cranks, which is just the bearing cups and bearings. Something like this: 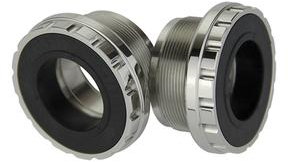 Note that you'll need to make sure that the BB fits the cranks. There are different spindle diameters used in two-piece cranks.

The easy alternative would be to use a pedal-based power meter.