What would happen if I don’t replace worn drivetrain components?

What would happen if I took a entirely new drivetrain and just never replaced anything? Of course, I’d keep it clean and lubricated.

With 11 and 12 speed chains being as expensive as they are, the old adage of “replace the chain to protect the cassette and chainrings” starts to make less and less sense. If I skip two new chains, I save the cost of a cassette. Another skipped chain would cover new chainrings.

In other words, skipping three replacement chains would save me enough money to just buy an entirely new drivetrain. That is better than the normal approach, which -for the same money- would give me four worn out chains, a worn out cassette, and worn out chainrings.

Importantly, this avoids the issue of having a new chain on a worn cassette or some other combination thereof.

What are the downsides to my logic? I can think of a few right now:

Despite the "hell will freeze over" warnings (it doesn't) it is worth considering why you ride a bike, and why you ride an 11- or 12-speed bike when a 9 speed will do the job just fine before going too deeply into the cost vs performance tradeoffs of when to change the chain.

So what to do, given the cost of 12-speed chains? Consider upgrading to a 9- or 10-speed drive train. As cassettes wear slower, and largely because of chain stretch, buy two or three 12-speed chains, and cycle them. This more evenly wears the cassette and chains and means you are not putting a new chain onto a badly worn cassette.

In my experience - breakage is not directly correlated to wear. I've had bikes with unknown mileage on them, and have chosen to ride the transmission into the ground.

Generally the performance slowly deteriorates, with chain slip under power being a sign that things are getting bad.

Unlike other answerers, I've never had a worn transmission break and strand me or injure me. The only time I snapped a chain is because I didn't reconnect it properly, and that one was perhaps half-worn. I have twice wiped a derailleur with the rear wheel's spokes, but again that was misadjustment, not wear.

If you can afford to, replacing parts often helps maintain things in top-top shape, but for those of us with real world demands on our wallets, you can go quite far into the worn stage before it gets too much. After all - you own it.

I find that climbs and going up grades are the most taking on the transmission and drivetrain so if its going to slip, its then, or when doing high power efforts like taking off from the lights.

All the functionality degradation symptoms of worn chains given in other answers here do not mention one more, possibly more psychological or ergonomic aspect of it. Namely the drivetrain noise.

A heavily worn chain will be loud. No amount of lubricant will silence it for longer than a short period of time. Elongated chain links will rub along the teeth.

The drivetrain noise may be fine for some people; for others, it becomes unbearable at some point. Additionally, the chain noise now masks other noises coming from the bicycle, which complicates detection of other audible problems.

Chains, cassettes, and chainrings are replaced to avoid sudden and catastrophic failure of the drivetrain. Sure, the chain might just slip a little, which might not be catastrophic, but catastrophic consequences are easily possible if something should suddenly and unexpectedly break.

Whether or not to keep up with maintenance is your choice, but in my opinion not keeping the drive train in good condition to save a little money on chains, cassettes, and chainrings is false economy. Medical bills and lost wages are far more expensive than easily-replaceable bike parts. If you want to save money, learn to do the maintenance yourself rather than paying a shop to do the work. Or maybe a local bike co-op can help you fix it very inexpensively. If you can't afford to maintain the bike over the long term, then you're probably better off selling it than riding it.

My personal story: many years ago when I was a (nearly) starving student, I was riding a ten-speed BSO that someone else had abandoned. I lubricated the chain when it squeaked and trued the wheel enough to not be annoying, and that was all the maintenance I felt like doing, because I hadn't paid anything for the bike, and because I preferred to spend my limited funds elsewhere. The chain had been skipping a little. One day I jumped on the bike and pedaled as hard as I could, because I liked to spice up my day that way. (I still do that sometimes, nearly 30 years later.)

Unfortunately my chain was quite worn, which caused it to stretch. Chains don't actually stretch, but the little pins, rollers, and plates wear, which makes the parts be a little further apart on tension. The stretched chain meant that the force of the chain was not resisted equally by every tooth of the rear cog that the chain wrapped around. Instead most of the force was resisted by the last tooth. The last tooth broke off, and then the chain broke off a few more teeth, and then the chain itself finally broke.

I had been standing on the pedals like a sprinter, leaning forward. My foot shot down when the pedal suddenly stopped resisting me, and over the handlebars I flew. I landed in the gravel-strewn asphalt parking lot on my forearms. I had badly-bruised elbows and road rash all over both forearms. Picking gravel out of the road rash in the shower was quite painful. I couldn't afford a hospital visit, being in the US, so I made do with first-aid cream. My arms took two or three days to scab over completely, and during that time I could not rest my arms on a desk or table; instead I had to hold my bloody arms in the air, disgusting my fellow students. I think complete healing took about a month. The bike was a total loss.

I have done this exact thing, and it continues today due to lack of parts availability. (Cannondale F700 from 2000, my daily commuter bike).

My chain and sprockets are so worn, they will only work with each other. The distance between chain rollers has increased and the sprocket teeth have worn to little points. I tried a new chain but it just jumps off the front chainrings...had to reinstall the old chain.

With a setup this worn, trouble first appears in the form of the chain hopping over the cassette teeth with a big "clunk". 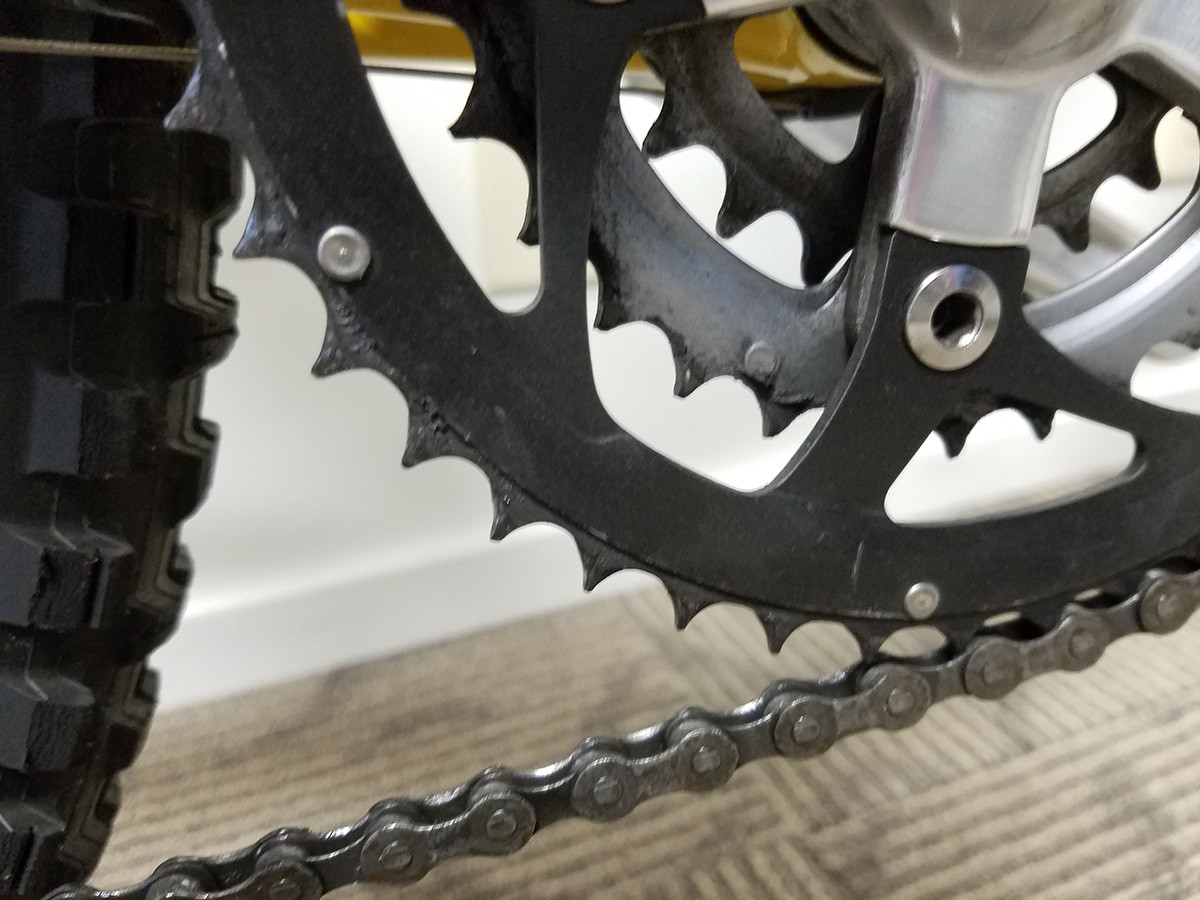 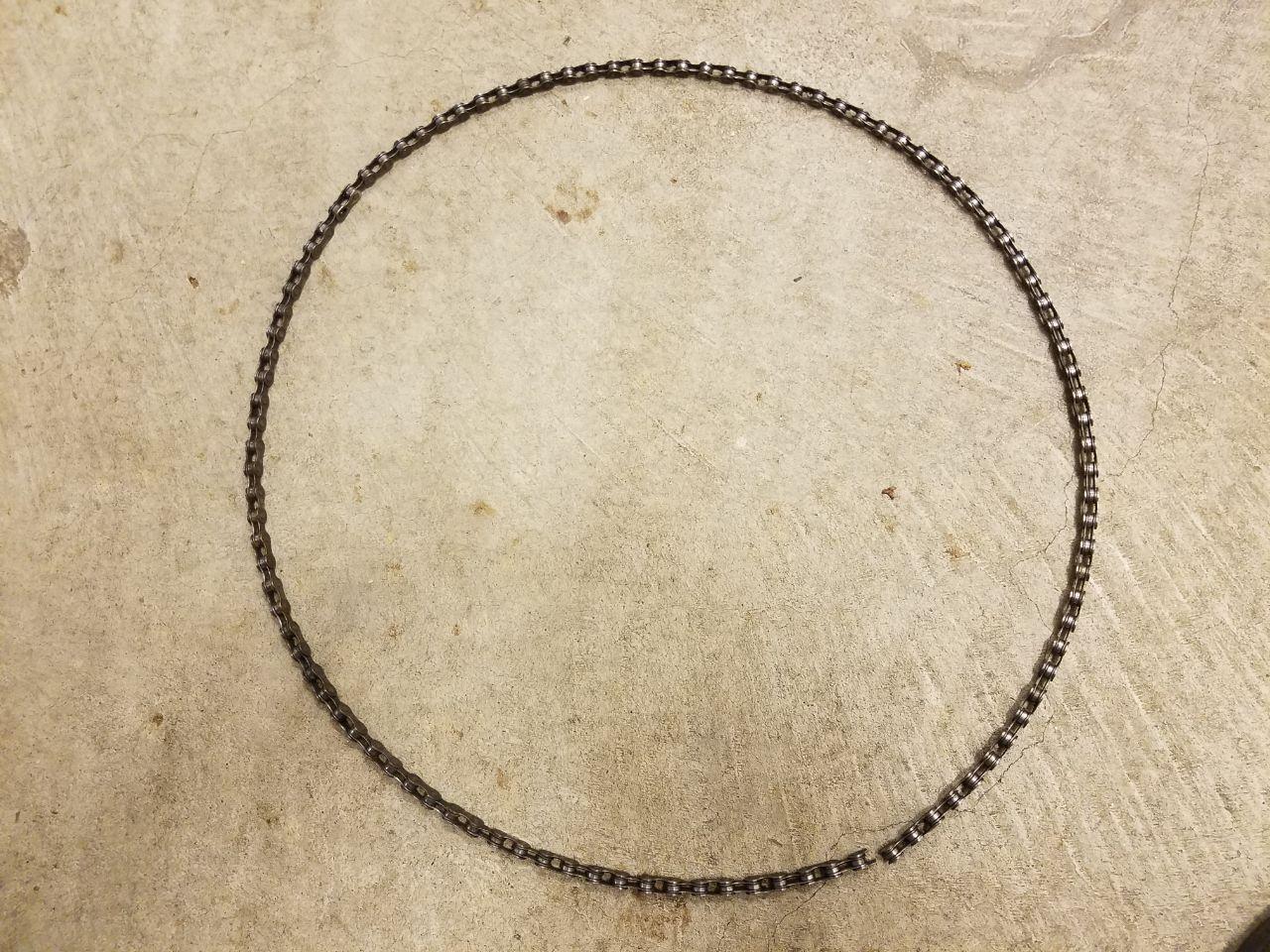 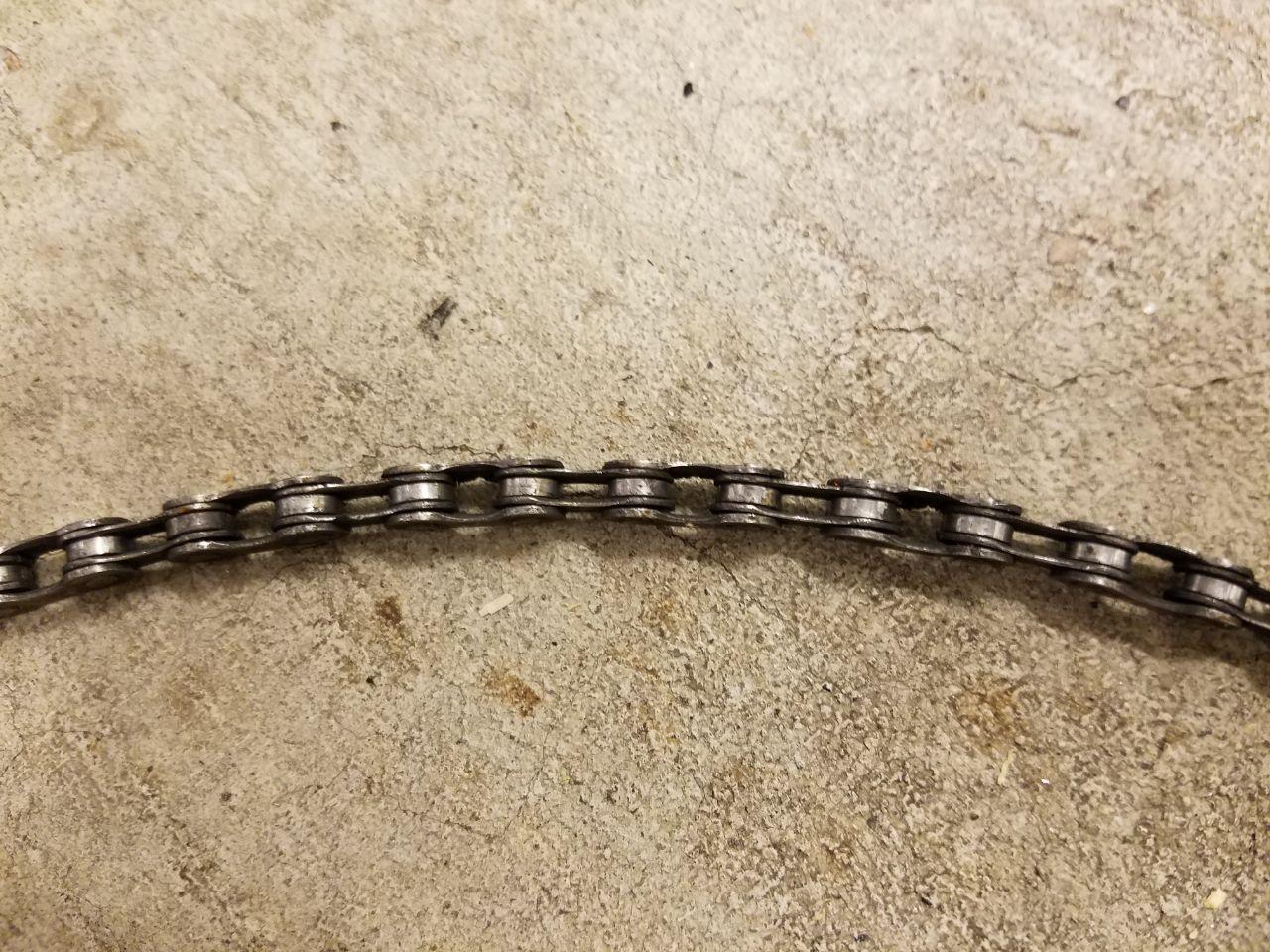 Hopefully parts will become available soon because this rig is one power pulse away from complete failure!

Personal experience: Worn drive train, chain thrown, caught in, and cracked carbon frame...$600 repair. Lesson learned. Keep track of mileage, maintain and replace as appropriate. Chain breakage is not really the issue. Chain rings last quite a bit longer than cassette and chain, in my experience. So, downside is a drive train failure that leads to a larger problem, potentially one that is even dangerous.

Wearing down a chain means that it gets longer. And a longer chain does not fit on your sprockets anymore. With a chain-shift bike, the chain will tend to climb up the teeth of your sprocket, eventually skipping over the teeth, or falling off.

Things are a bit different with single speed or IGH bikes: Single speed sprockets have longer teeth that make skipping impossible, and falling off extremely unlikely. Nevertheless, an elongated chain will put force only on a single tooth at a time. In the long run, this will make your sprocket loose its teeth, which lets the chance of loosing the chain skyrocket. Once your sprocket looses a second tooth in a row, it's game over. You'll be pushing your bike back home as the sprocket won't be able to retain the chain anymore.

Bottom line: Once your chain skips, or you see your sprocket loose its first tooth, it long past the time that you should be replacing your chain. And once you've worn down your drivetrain to that level, you will need to replace both chain and sprocket(s).

Do I really need to repeat old wisdom?

9 chains per 3 cassettes per 1 chainring cluser

Look at the prices of the parts. A worn chain(inexpensive) wears everything(expensive) down. A worn "everything" wears down the chain in record time. And it shifts badly until the chain is worn enough to fit.

DO switch your chain when it hits the 1% mark at the latest. The rest ... meh.

Replacing a chain is much cheaper than replacing a whole drive train so it does not make sense to completely wear out your chain as if you do this you'll definitely need to replace the whole lot.

As your drive train wears down (and as other answers say) your chain will likely slip in the most worn gears whilst under load, shifting performance will deteriorate as cables stretch, chain starts to sag and teeth wear down to match your chain.

As your objective is to save money I would suggest you do what I do - Invest in a chain tool and get into the habit of measuring your chain regularly and replacing it before it gets half-worn.

I've been doing this for several years and I can usually get away with changing the chain ring and cassette every 3-5 chain replacements without any noticeable degradation in shifting performance.

It's also well worth replacing the cables at the same time as the chain as these can stretch a lot.

Context - I ride cross country marathon MTB unfortunately where I ride is usually raining and muddy with loads of climbing so components get dirty and are under heavy load so tend to wear out quickly.

Not the answer you're looking for? Browse other questions tagged maintenance chain cassette chainring drivetrain or ask your own question.

3
Change chain with cassette or do nothing?

6
Help with cassette, worn or not?
3
If chain/ BB/ casette are dead can chainrings and derailleurs still be OK?
2
new 9-speed chain fails after 4 weeks and ~240 miles
5
Modded folding bike and strange chain skipping on most gears
2
Should I replace these cassette and chainring?
2
Do my large and small chainrings need replacing?
4
I have changed the chain after my gauge showed that it's .75 worn. New chain jumps anyway. Why? How to deal with it?
2
How long can I safely use a chain for?
9
Why are cassettes replaced more often than front chainrings and derailleur jockey wheels?