Should I replace the tyre or can I keep going?

I just noticed a small tear in my Continental GP 4000s. It does not bulge out from the side. The tyre have been on for some years now but dont have more than 1000km on them.

I am worried though if I should change them or if I could keep going with them? 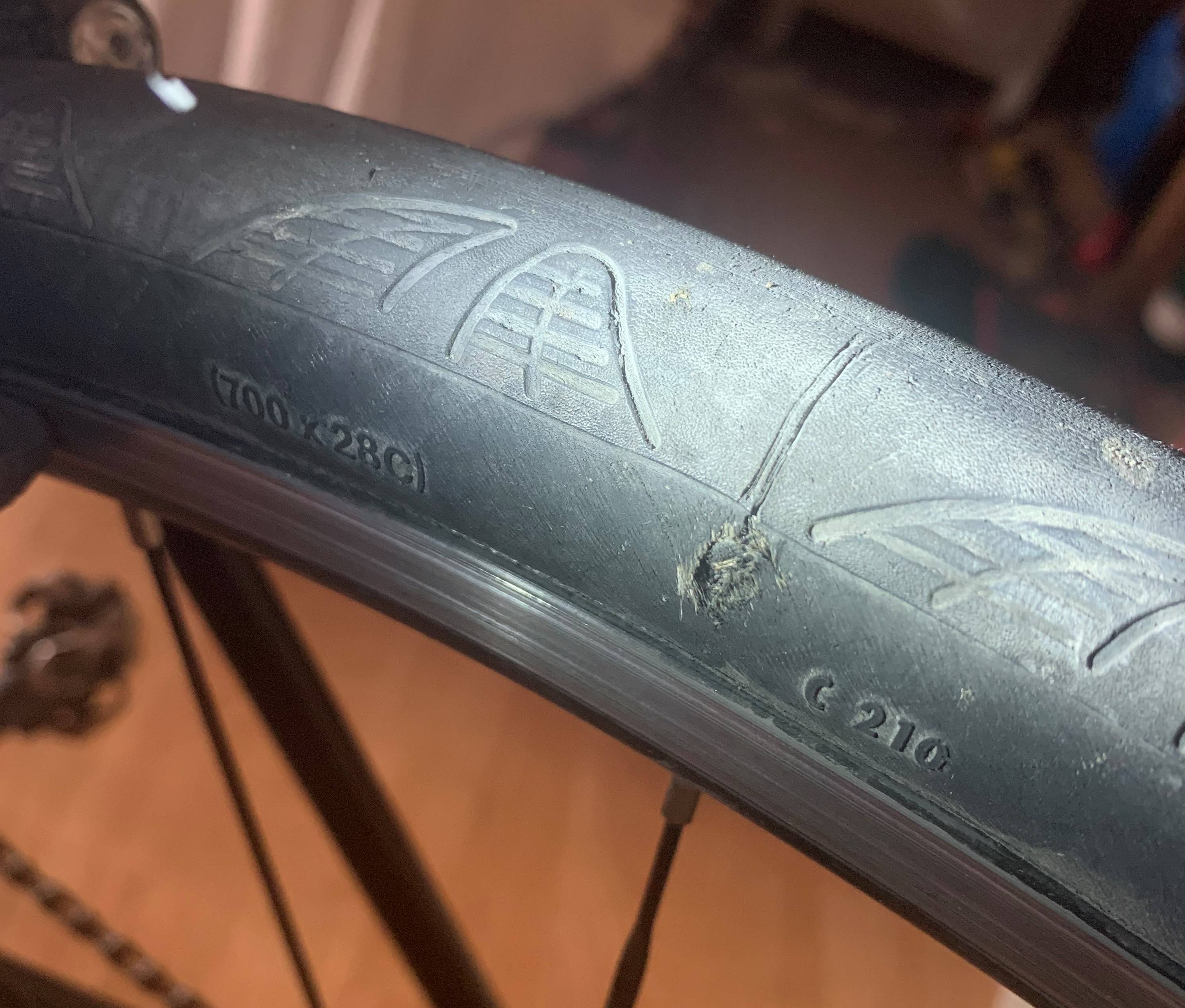 Edit: Thanks for all the answers!

Replacing the tire seems like the best thing to do. Especially since I mostly go greater distances whenever I go out cycling. I have a hard time seeing the damage actually myself, but there is no doubt that some of the structural components of the tire have been damaged.

I would gladly pay €30 (or whatever the tire costs) to decrease the risk of tire failure. After all, going out cycling is supposed to be fun and not to cause feelings of uncertainty.

It's difficult to tell from this picture, but it looks like the casing—the structural part of the tire—has been damaged, so it's just a matter of time before the tire fails completely.

Look at the inside of the tire. If the damage has penetrated all the way through, I would stop riding on that tire. If it hasn't, you might be able to get away with gluing in a "boot" (a small piece of old tire) to reinforce this spot. But based on this picture, I think replacing this tire is the smart thing to do.

A bike has a number of systems: propulsion, suspension, braking, steering, etc. Propulsion is one of the least critical. If it fails, you walk home (or call someone for a ride), but otherwise it's not much of a hazard.

Most of the other systems though, a failure while you are on the bike and especially if you are at any significant speed, can lead to significant injury. When any of these systems are compromised, one should ride a bike with great care and prejudice. It might be okay to limp home at a slow speed, making sure to take corners gently, etc. but you should treat the bike skeptically. Don't ask too much of it until it's been repaired.

In the case of a tire (which I'd consider part of the suspension), if it were to fail when you are riding straight on a level surface, that's probably a controllable outcome. But if you're braking heavily, or taking a sharp turn (both activities being things that put added stress on the tire and make it more likely to fail), you could easily lose control of the bike and fall.

There's limited capacity for any of us to judge the degree of damage to that tire. But when I view the photo at its full resolution, it appears to me that it's constructed with a very thin sidewall to start with, and that at least two layers of structural plies have been cut through somehow.

Even a single layer of structure being damaged would in my opinion be cause to replace the tire. You can get away with superficial damage, such as light scraping of the rubber surface, torn tread block, etc. But you do not want the tire to fall apart. The structural elements work together and are critical. If anything is damaged, you can't trust the tire. There's no guarantee that a failure would be gradual. It could be that there's a single thread of ply holding that section of the tire together, and that if it broke, the whole sidewall would fall apart.

Fact is, a new tire is really, really cheap insurance to make sure the bike is safe to ride. The fact that you felt the need to ask the question at all, is sufficient reason to determine that the tire is probably unsafe and needs replacing. Unless you're the type of person to skydive with a 'chute packed by a five-year-old, don't take chances with stuff like that. :)

Personally I'd boot the inside with a cheap/thick tube patch and keep riding it. Don't bother putting anything on the outside.

Ultimately it is up to you and your risk tolerance. As it stands now there's a definite risk that it will deteriorate further over time. There is a smaller but non-zero risk of it letting go quickly, and an even smaller risk of it suddenly releasing in a blowout. Booting it would minimise that last.

Make sure you carry one or more spare tubes when on rides, and the tools to change - there's a possibility the tube could herniate through a tiny hole and then fail.

You should absolutely definitely eyeball this part of your wheel every time you do maintenance on the bike, and perhaps before every long ride. If it changes, then re-evaluate.

Additionally, consider the location of your brakes, and whether this slight distortion risks rubbing on the brake pad/caliper.

Also if you had a trainer then that's a great way to "use up" a tyre that is less-than-optimal.

If you install a tire boot (such tire boots are available from at least Park Tool), and keep a close eye on it (look whether the hole is growing / starting to bulge), you can continue using it until there is clear evidence that the problem is becoming worse.

Note that the tire boot needs to have fabric structure to contain the high pressure tube. An ordinary tire patch is unsuitable. It needs to be something like Park Tool TB-2.

I had slightly worse sidewall damage once on a bicycle I had. Even the initial hole was larger than yours. I installed a tire boot and used it for about 50 km. In my case, the damage was so severe that after 50 km I had enough evidence that the tire boot is insufficient to contain the damage and had to replace the tire. It eventually started to bulge so much that I was uncomfortable using the tire.

You need a good monitoring interval. I would say initially check it every 5 kilometers. If the damage does not become worse, after five to ten such inspections, you can maybe increase the inspection interval to 10 km and then 20 km.

Or then you could simply replace the tire if you think checking it every 5 kilometers is unacceptable.

Not the answer you're looking for? Browse other questions tagged tire damage road or ask your own question.

2
What do I need to know when replacing my inner tube/tires?
4
What's the shelf life of tublar tires?
4
Checking fixie for damage
3
What tire should I put on my road/commuter bike to prepare for a New York winter?
6
A pin punctured my tyre. Should I only replace the inner tube, or patch the outer, rubber tyre?
3
Tubless rims with non tubeless tires — what rim tape?
0
Why am I suffering from repeated flats same spot on wheel?