The Kwiggle is folding bike that has been around for a while now (even though doesn't seem to be for sale yet): https://kwiggle.odoo.com/en_US/startseite 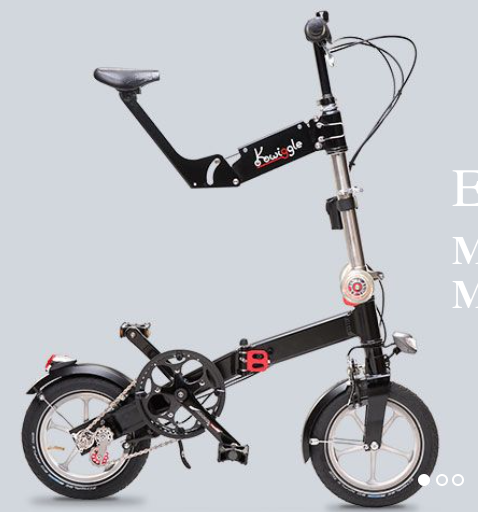 Apart from it's folding capabilities I was interested in the more upright riding positions which they seem to claim that "You ride faster and your quadriceps have to work less." (https://kwiggle.odoo.com/en_US/home-kwiggle-vorteile) 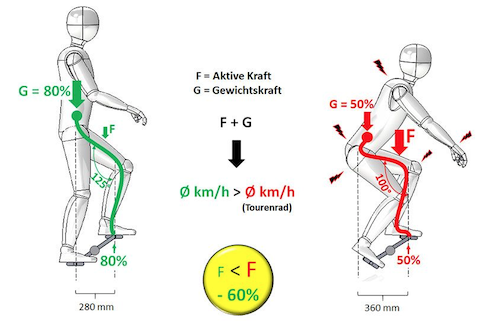 I find this a quite interesting claim in terms of efficiency. Is there more evidence of this, and if yes, why aren't more "city bikes" doing this?

Another interesting "city efficiency" aspect seems to be the movable seat which is highlighted more in this video and they claim "The movable saddle follows your natural hip movement.":

Personally I think the combination of the movable seat with a more upright riding style (which is what race riders do to increase speed) is a quite interesting combination!

So my question is about general efficiency of this approach. Is it an entire waste of energy compared to regular diamond shaped bikes or is there something to the combination of upright riding + movable saddle?

Personally I think most answers are addressed by non-european cyclist. In Europe (Netherlands and Denmark) an upright "dutch" bike is the norm for urban cycling and has showed several postural and efficiency advantages.

A dutch bike posture seems to be very similar to the one presented in this Kwiggle prototype: 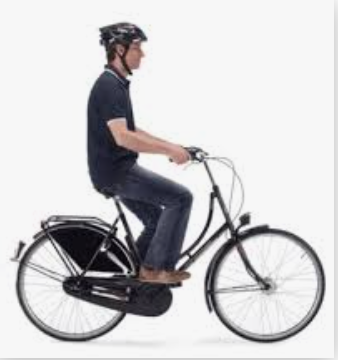 With regards to the "swinging saddle" there's very little evidence showing how efficient this system can be. Personally it does sound interesting as the pedal stroke is leveraged by the hip moving towards the direction of the stroke.

Regarding the rest of the features of the bike, there's many things left to be desired, but the question is mainly about the "upright posture" (already established in Europe) and the "swinging saddle".

I'd be curious if there are any other "swinging saddle" prototypes out there since that seems to be the novelty of this approach.

When I consider all the claims made, I believe they are probably true and verifiable... Not once do they tell you what they are comparing their product to, they lead the reader to presume...

"You ride faster and your quadriceps have to work less." - compared to what? Walking

"The standing position is also unique in the world. You get more force onto the pedal." - More force than doing what on what? If you stand on a regular bike, you have the same position and same advantages, but you set the saddle up for more efficiency - by pedaling faster with less force (i.e. spinning - which is more efficient when trained)

Every one of the claims falls into the same kind of questionable claim. Probably spend a fortune on legal fees ensuring they don't breach various consumer protections laws around the world.

I am Dutch, used to seeing people riding in the upright position every time I leave my house.
I'd say that the guy in the video has his sadle too high. He is moving his bottom too much. I think that the seat should go down by a few cm, maybe not more than one inch, two at most.
In itself the sitting up position is comfy, not much (or no) presure on the arms and hands, good view on the road around you and often enough time to have a wider look over the landscape.

I must say that I am interested in the different design and would like to see it in real life and test it, especially the fold. But I do not think that I would spend the money on it. The wheels are too small and there is no place to bring anything (but a backpack which is not what I would call efficient.)
This bike looks like something you put in your car for the last few km/mile to your city destination, not something you use in a train, as commuter bike on both ends of your twice daily journey.

I find this a quite interesting claim in terms of efficiency. Is there more evidence of this, and if yes, why aren't more "city bikes" doing this?

There are two factors at play here.

Firstly, the seat position. I think you'll find that most bicycles sold have an adjustable seat height. The seat position is very critical and should be correct within half a centimeter. So essentially they propose that the seat should be very high, higher than in most bicycles. Try it; you won't like it. Besides, most bicycles have a seatpost which allows the seat to be adjusted to ridiculous heights. You don't need to purchase this special bicycle to have too high seat height.

Secondly, the handlebar position. This does not affect the legs - pedals - cranks system at all. You can move the handlebars higher (in which case they should be moved closer to the seat as well) or lower (in which case they should be moved further away from the seat as well). Most bicycles have some adjustability in the form of adjusting stem spacers and flipping the stem up or down, but major adjustments need to be made by changing the stem to one with a different rise angle and length.

Most city bikes have a handlebar that is high and close to the saddle.

The only effect a handlebar has on pedaling is that when pedaling hard, a low handlebar means you're leaned forwards with your upper body and thus you can pedal with high torque without having to pull up from the handlebars. A high handlebar and an upright riding position does not allow you to do this, because your upper body weight is used to resist the pedaling torque, and then you need to resist falling backwards with your arms.

On the other hand, when not pedaling hard, a low handlebar means you have to support your upper body with your arms, which means your arms will become rapidly tired.

So, pedaling effort can be higher with low handlebar, but if you're not pedaling hard all the time it becomes rapidly uncomfortable. This is one of the reasons why most long distance cyclists prefer drop handlebars. They allow you to adjust the hand position (on the drops vs. on the hoods vs. on the corners) so you can pedal with high effort when you want, have an aerodynamic riding position when you want, but have an upright comfortable riding position when you won't be pedaling with all the effort.

I agree that low effort riding at moderate speed is surely the main goal of the design.

But the inventor also said he looked at cyclists going out of saddle for more power and wondered if it would be possible to create a bike which utilizes a similar position all the time.

When you look at people cycling out of saddle they bring their center of gravity in position over the upper pedal all the time. So he needed a moving saddle. This was his starting point for the design.

There are some riding experiences available in German language and they are generally positive. Problems involve uneven ground/obstacles because of the small wheels, front wheel coming up on high effort uphill pedaling and the need for a (short) time span at the beginning to learn the right body movements.

Not the answer you're looking for? Browse other questions tagged speed folding-bicycle design or ask your own question.