Novice: can I replace this bike trailer clamp with an axle one?

I bought this trailer from FB marketplace. I am concerned about the clamp and feel it's not a very safe option.

Is there a way I can replace this easily with a hitch that sits in the axle? Not looking for anything customized.

In worst case, I'll sell this trailer and get something with the proper hitch. 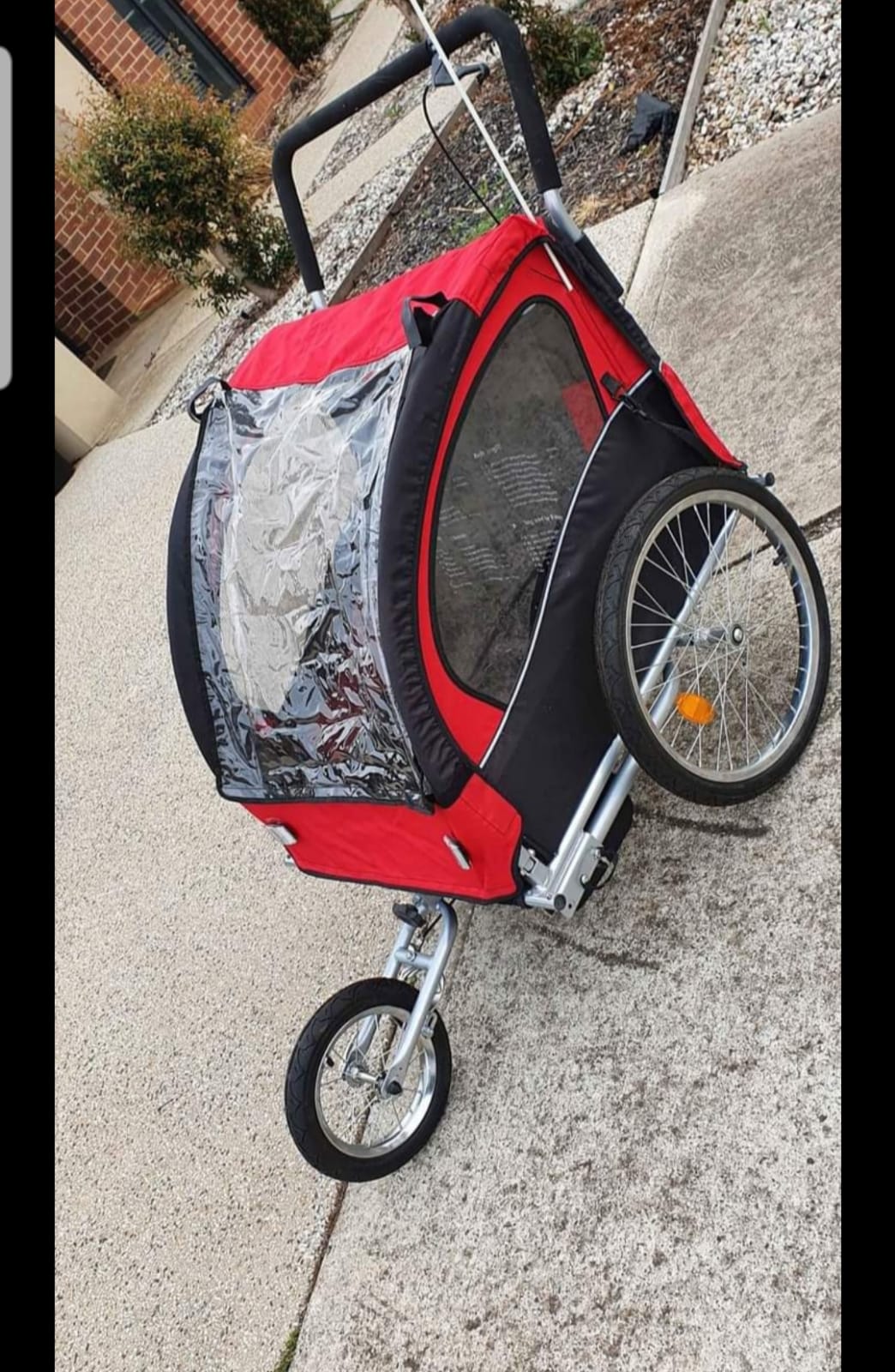 I had one of those - it was convenient because it could clamp onto most bikes, but it always came loose over time. Once it fell off the chainstay completely, and only the safety strap held it.

So I bought a generic trailer hitch from a local bike trailer builder and used that. I had to shorten the drawbar by quite a lot to keep the trailer in-line with my bike. Otherwise it was just careful drilling and cleanup of the burrs, and bolting it all together.

Also I had to fit the towball part to my bike and to any bike I wanted to use as the tractor. So I bought three, fitted one, have one screwed to a stake for times when I want to mount the trailer somewhere stably, like a bike fixup. The last towball is spare to loan, if someone wants to borrow the trailer.

Here's two pictures of the coupling. Its essentially two strips of metal that straps around two sides of the round drawbar, and across the end to provide somewhere for the main bolt to attach.

There's one big grade8 bolt that passes through the end cap and is firmly retained by a nut. Further down the thread is another nut which is free to rotate, which allows the trailer to twist WRT the bike. It won't come off unless the trailer did 20 full rotations.

The up/down and left/right motion is taken up by the towball in its cup. THere's perhaps 30 degrees of motion up/down and the left/right is limited by the rear wheel/drawbar touching.

Finally the towball is retained in the cup by that sliding cap, which can pull back under hand pressure to allow the ball through into the recess.

The towball on the bike looks like this - its a steel angle plate which goes under the axle nut, and that holds the ball/stem piece. 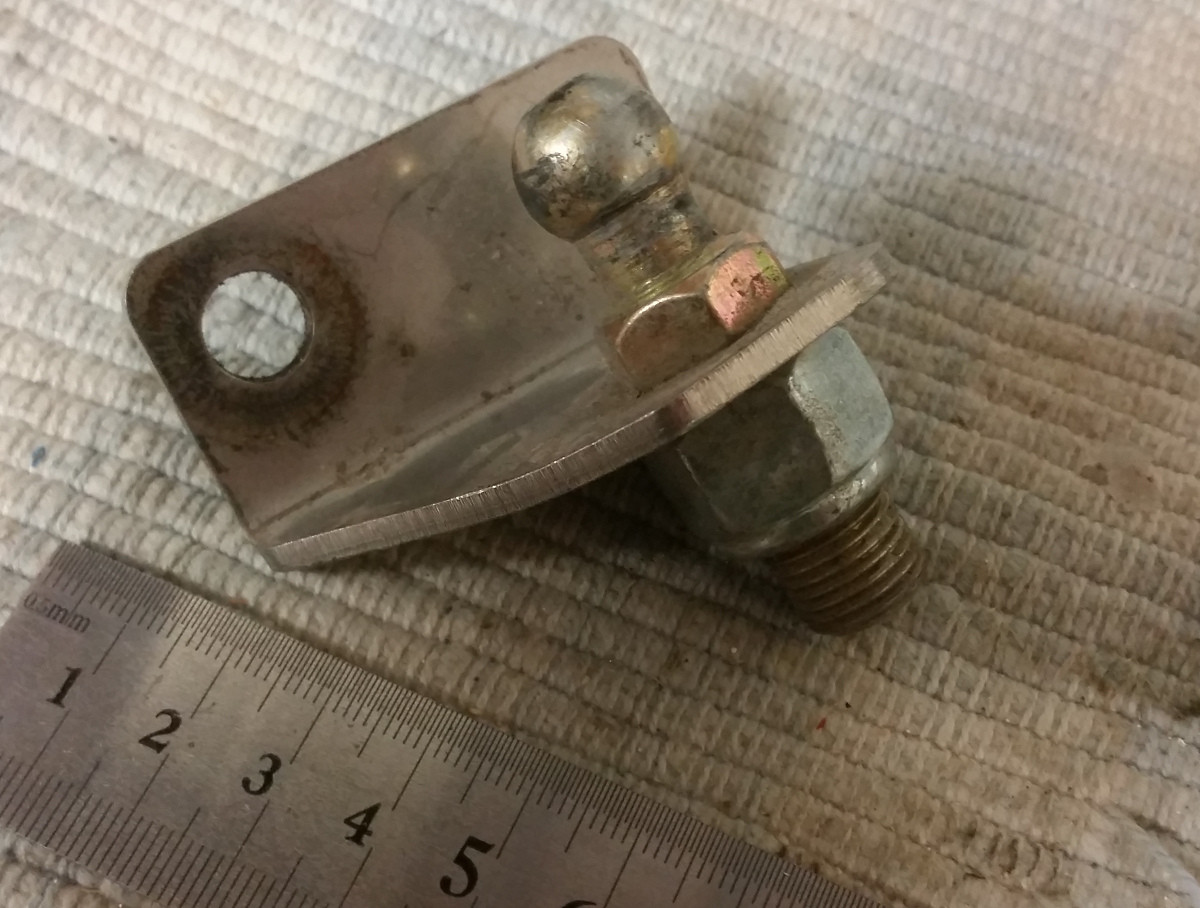 This is a photo of the towball plate on the bike. 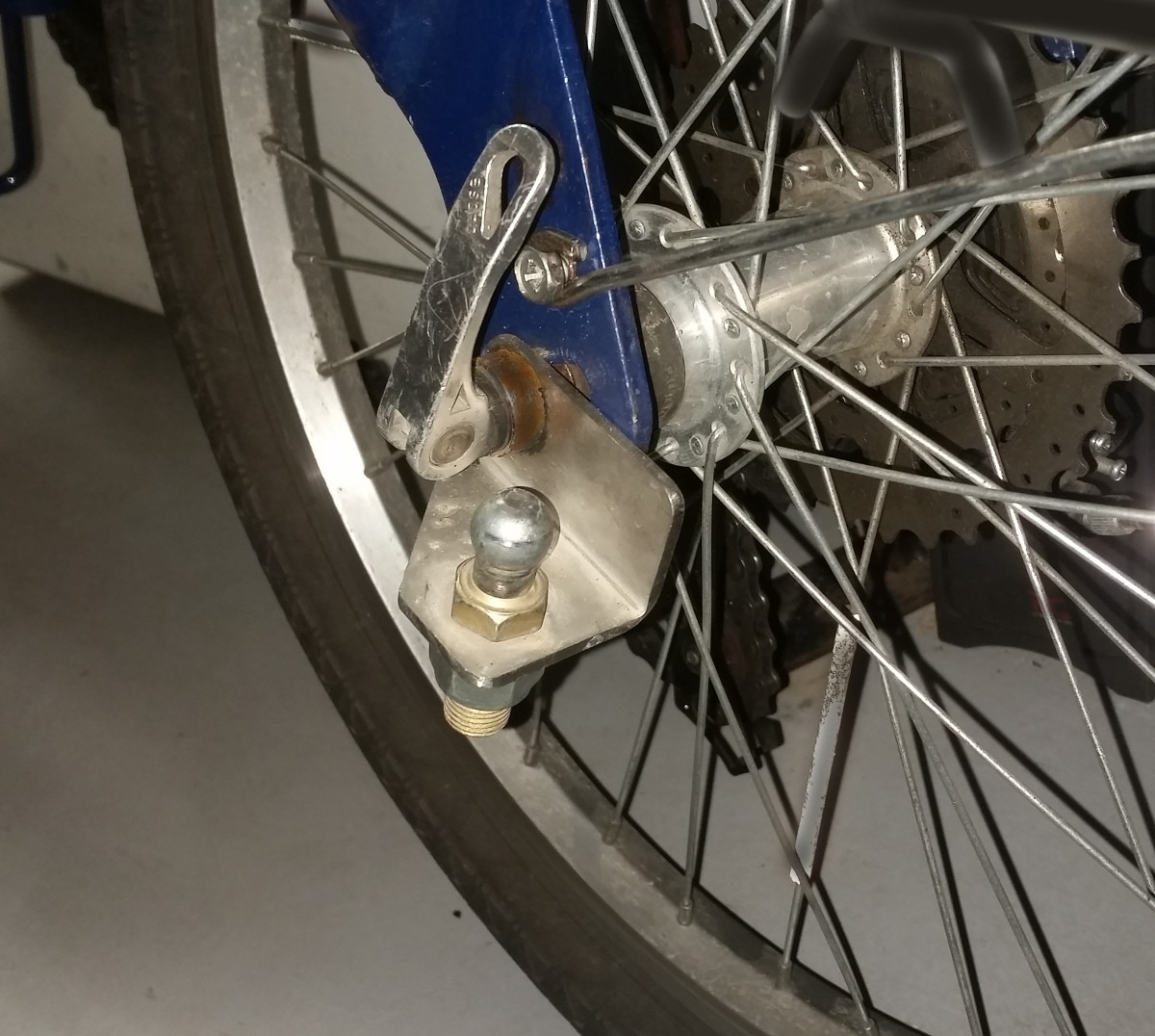 Its a 20" wheel trailer and so is the bike, so sits flat. If I tow with the bigger wheel MTB then the drawbar ends up pointing upward a little.

A good hobby machinist could make something like this up. I'd just buy the bolt and nuts. The hardest thing is drilling/milling and tapping the end piece, and getting the hole to suit the towball, and turning the towball on a lathe.

I have towed a trailer+load of 100 kilograms and the towbar worked fine. That weight managed to slightly bend a wheel axle though!

There is no universiality between trailer hitches. If you don't want to get into fabricating, modifying, or improvising anything, then you're limited to searching out an axle hitch made by the same manufacturer. The way it usually goes is the more specialty retail level trailers (Burley and Thule being the big ones) have different hitches available, and the big box type brands do not. Usually the hitch for them is something like what you have, and there's nothing else available.

It looks kind of like there wouldn't be anything stopping you from just bolting in a Burley tongue piece, which is available by itself, and running it with a Burley standard axle hitch. But that is of course the direction you say you don't want to go in.

Not the answer you're looking for? Browse other questions tagged trailer child-seat or ask your own question.

6
How can many people move a car -trailer with bicycles?
4
What kind of bike rack can go with this bike?
4
How can I find a biking club that has a group for riding with kids in a trailer?
3
Do dry wheel bearings increase drag?
7
Can I use a Brompton bike with a trailer like the Thule Chariot Cougar?
4
I'm shopping for a child trailer. Should I get one with suspension?
5
Find or fabricate a metal bracket for bicycle trailer
2
What child seat would fit an old model Gary Fisher bike?
5
Where can I get a replacement drawbar for a bike trailer?
3
Can I convert Kiddicarrier jogger to a bike trailer?