Explanation on the lineup of Shimano Derailleurs

I am pretty sure that almost everyone in this community knows the answer to this question but not me. I found this picture on the internet. 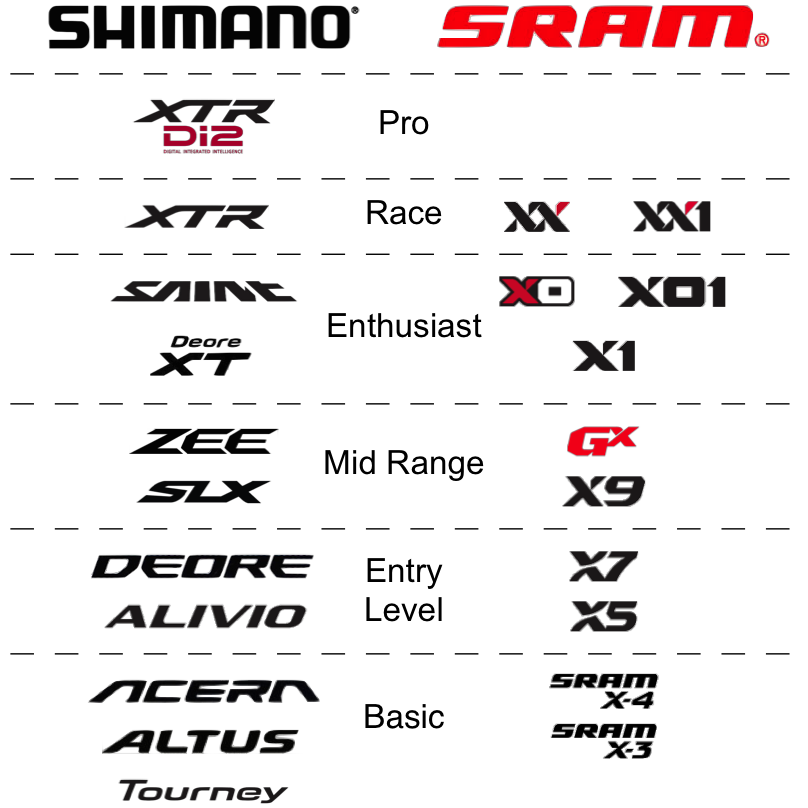 I am just a beginner and I still don't understand the difference between Altus and Acera, TX and TZ, where is Tiagra, Claris, Dura-Ace, and other major types of derailleur in this list. I somehow find the SRAM lineup to be clean and easy to understand but Shimano is a total mess for me. Can someone please explain the complete hierarchy of Shimano derailleurs? Am I the only one who messes this up? Thank you!

Mostly this is MARKETING.

Shimano tend to use the same designs for a lot of their products, but typically these are introduced earlier on higher groupsets and are 'trickled down' to lower ones.

Also your picture is quite old and SRAM have since complicated it considerably with its 'Eagle' groupsets.

If you refer here https://si.shimano.com/

then you can look at the actual diagrams for each derailleur

Referring to my first link, the current 'XTR' consists of three derailleurs:

then Deore XT is:

This is the exploded diagram for M9100-GS/SGS

The parts differ in the jockey wheel cage, which is two pieces of metal or carbon fibre enclosing the two jockey wheels

The outer cage is here

both parts are VERY expensive because if you refer to my first link they are both made from carbon fibre. The SGS is 90mm cage (wheel axle to wheel axle) while GS is 74mm

The spec shows that this is 237g vs 240g, which you might think is nothing and indeed it is, but the spec also notes that the GS is designed for Shimano's 10-45t cassette, and SGS for the 10-51 cassette. Because of the extreme size of modern MTB cassettes, and Shimano's Shadow design (where there is only one sprung pivot, not two), a derailleur that works well with a certain large cog size might not work so well for a smaller cog.

So the XTR (XT Race) has a philosophy of offering a small adjustment to suit the specific preferences of elite athletes.

The other XTR RD is

But, the lower knuckle on the XT ('plate body') is GFRP and the one on the XTR is CFRP. The latter is a very high quality material, the former not so much.

The outer cage plate on the XT is aluminium, rather than CFRP:

The XTR uses higher quality lighter fittings, such as this one: 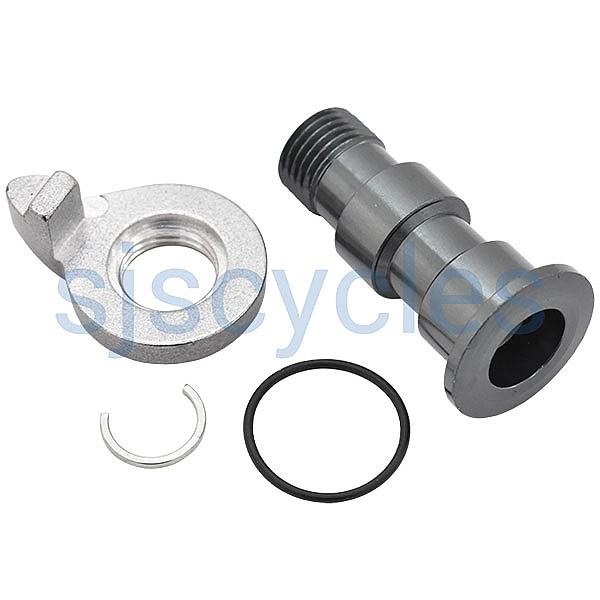 whereas the XT is 18g 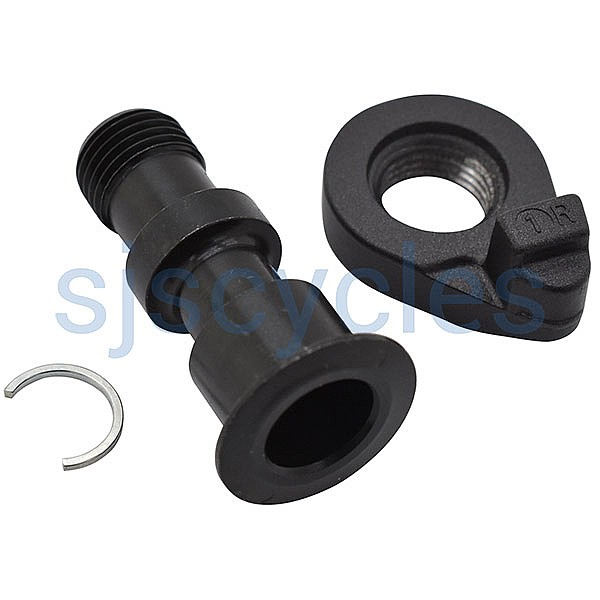 This results in the XTR being 44g lighter. So it's slightly lighter, slightly higher quality, and far more expensive.

If you look at SLX, then comparing the table it's almost identical to XT. But the outer cage plate is 66g rather than 35g, as it's made of steel

In addition, SLX (and its road equivalent 105) uses relatively cheap jockey wheels without sealed bearings. An athlete could expect to give up 1W (out of 300W) because of this.

So the SLX and XT derailleurs are all but identical, except for the jockey wheels and a cage plate, and if you had purchased a bike with SLX derailleur then you could very sensibly replace the jockey wheels (which are also more durable). Possibly the cage plate too, although it might be a different colour!

except there is a slightly different bracket axle, and the inner cage plate is steel rather than aluminium. This adds up to 10g.

Again, you could effectively upgrade your M6100 derailleur to XT level by replacing the jockey wheels, and maybe the cage plates (though this latter is not so crucial, though lighter weight hanging off your wheel can't be a bad thing).

The latter of these would previously have been known as Alivio, but due to people sharing inaccurate diagrams like yours they decided to call it 'Deore', as it allows them to sell a lower quality groupset a higher price and most people won't notice.

We can see this if we refer to the M4120 derailleur in the specification table, where we see no 'GFRP', and lots of 'resin', which means 'cheap plastic'. Shimano may use different kinds of 'resin', but it's a sign you have a relatively cheaper derailleur.

however the spec notes it's '11' rather than '12' speed. The 11-speed jockey wheels have a different part number, so are likely subtly different.

The M5120 and M4120 derailleurs appear to use similar construction, but M5120 has 'Shadow+', which means it has a clutch, whereas M4120 does not. The clutch mechanism is in fact identical across XTR, XT, SLX, Deore.

Looking beyond Deore, scrolling down we find M3100 Alivio, which is in fact (looking at older spec sheets) based on M3000 Acera, so Shimano have reduced the quality of Alivio to Acera level.

Of course there wasn't much difference before. Comparing M3100 Alivio (which would previously have been called Acera) with the M2000 Altus, then the specs show only very minor differences, and it would be hard to call the Alivio a meaningful upgrade on the Altus.

The other difference with Alivio/Acera/Altus/Tourney is they are a different design intended for older drivetrains which used a triple or double front chainset, and a smallish cassette sized 11-36 or 11-34. This is very different from the current Deore-XTR, which use large 10-45 or 10-51 cassettes, which require a different derailleur design.

The distinction specifically with Tourney is that it doesn't follow the 'Shadow' design, which means it uses Shimano's older design, from more than 20 years ago.

So there is not necessarily a big quality difference with Tourney, but Shimano don't really guarantee that - for example, a Tourney shifter might use lots of plastic internally whereas Altus might be more metal. It's more that Tourney is outside the groupset hierarchy and is not promoted or marketed - it's their intention to push people toward more profitable parts.

Note also that Tourney parts are typically made in Shimano's Indonesia factory, whereas higher grade parts are made in Malaysia, and the newest parts in Japan. A lot of people prefer 'Japan'.

As far as Di2 goes, Shimano haven't bothered with it for the latest series of parts. Maybe they will in the future. It's an electronic gear shifter for XTR and XT, which adds a motor to the derailleur. SRAM do have a slightly more advanced version of this called 'AXS', which is wireless.

Actual racers might not use even 'XT', if they aren't sponsored - for example, for brakes SLX and XT turn out to be almost identical, so you might find a bike with XT derailleur and SLX brakes.

As far as Saint goes, it's arguably Shimano's highest quality kit, but it came out in 2012, and uses 10 speeds, not 11 or 12. It's for downhill racing, which means it's strong as a priority, and won't work with a large gear range. It doesn't use any plastic except for the clutch mechanism, and the design is related to circa 2012 XT, and has little to do with modern stuff. Zee is the cheaper version of Saint, so some steel parts in place of aluminium, and SLX/Deore quality jockey wheels rather than the XT-grade sealed bearings on the Saint.

So you can't make too many generalisations, but generally XT is always high quality, XTR is for people who are sponsored or have lots of money, Deore and SLX for drivetrain purposes tend to be very similar, Alivio, Acera and Altus tend to be similar to each other and lower quality than Deore/SLX (but you can't just go by name, as the model number differs), while Tourney might be lower grade, but will lack anything vaguely recent in terms of design. Note also that Tourney has a bunch of different model numbers.

As far as SRAM goes, I don't care too much about them, but they have 'AXS' electronic wireless shifting, and then they have their 'Eagle' brand which refers to 12-speeds, which they got before Shimano. Initially this was very expensive, but now they have released several grades:

and are promoting these. This is quite confusing, as as your diagram shows they used to have the top 3 but not the bottom 2.

I have seen more than a dozen reports of broken SX Eagle derailleurs snapping at the top knuckle, due to use of poor quality plastic, so it's not clear where the quality level comes at all, as because on the one hand they want to promote 'Eagle' = good, but on the other hand the SX Eagle probably comes around Shimano's Alivio level (which is 9 speed vs SRAM's 12) in terms of quality of construction.

So don't believe for a moment that SRAM is less confusing, or that you can rely on brand names. In fact an older 'Deore' derailleur' might be higher quality than a newer SLX one. So....

Shimano actually has a very clear progression of levels of components. Just look at the Line-Up Chart https://productinfo.shimano.com/#/lc.

It's easy to see what groupsets are supposed to be better than others. It is true there is a bit of a lack of differentiations between Altus, Acera and Alivio now these are all 9 speed groups.

0
Explanation on the lineup of SRAM Derailleurs

12
Moving tfrom Shimano 9- to Shimano 10- speed
6
Why has the Centeron pulley disappeared on many Shimano rear derailleurs?
5
What is special about 1x11 - why not just big cassette and single front ring?
5
Shimano bolts; oversized hex driver holes? Planning for failure?
3
Older Shimano Road Brake Levers vs Newer Ones Quality (SLR vs Super SLR)
19
Why is Shimano's 105 groupset called 105?
7
Are the Shimano derailleurs sold on Ali Express genuine or fake?
0
How to increase the durability of gear-shifters
0
Explanation on the lineup of SRAM Derailleurs
8
What is the heritage behind Shimano groupset names?