What is the purpose of whipping a bike?

What is the purpose of "whipping" a mountain bike during a jump? Is it merely a trick (show off) or is it a functional move with a purpose? It is very commonly seen in videos which made me wonder if there is a useful function to it.

By "whipping" I mean the motion you can see during jumping in the 30 or so seconds starting here:

A screenshot from the video: 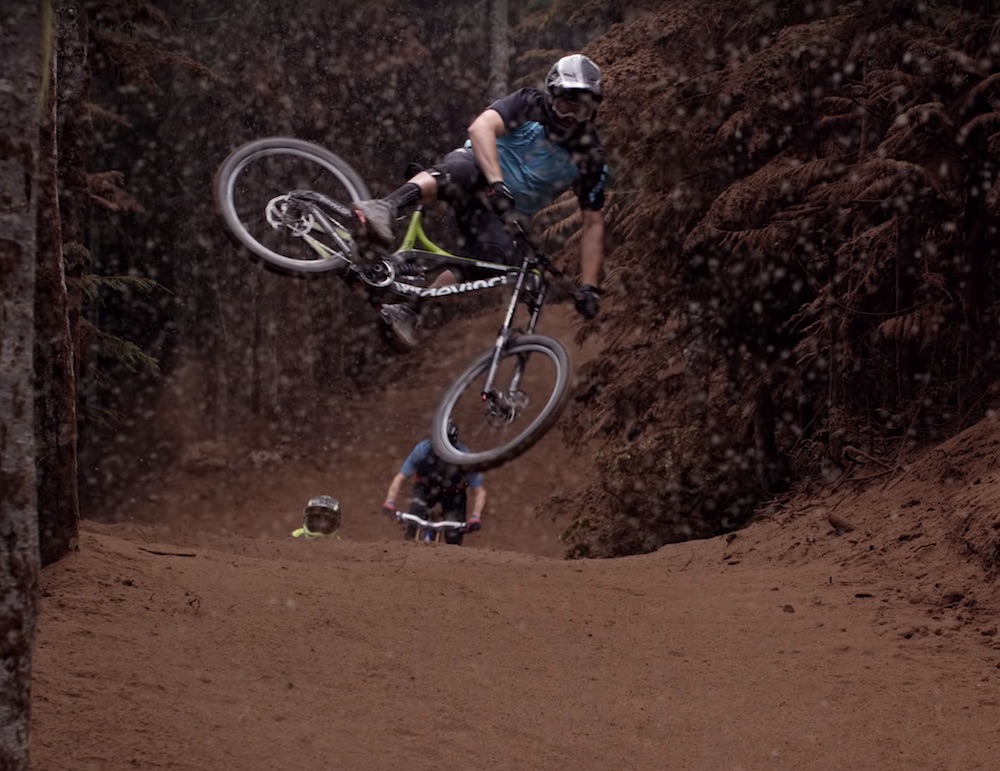 Spinning wheels have gyroscopic effects. Whipping the bike can be a way to reposition the bike so that when it comes out of the whip, it is in an orientation that wouldn't be possible going over the jump dead-straight. This effect is large in the case of motocross.

From a BMX perspective, it is very important to land on the backside of the landing ramp with the proper bend in your legs so that you can get the maximum "pump" off the landing. In some cases, especially in the case of a short landing ramp, it can be advantageous to do a slight whip and therefore land with the bike at an angle. This can get you more pump than landing perfectly straight. If you watch people negotiate a street spine, for example, you will see that it's downright awkward to go straight over without doing a whip.

Also, there's often a corner and a berm shortly after a jump, so a slight whip can set you up for what comes next, vs. landing perfectly straight then having to muscle the upcoming corner.

From the perspective of a competition where time matters, whipping does not serve any purpose, as it won't allow to clear a jump any faster. Scrubbing, on the other hand, allows the rider to take a lower arc and spend less time in air, at least theoretically.

However, if we are talking about an event where style matters, whipping does look cool, and it shows skill. It is simply harder to pull it off than to simply land a jump without it. Compare that with other sport disciplines, such as sport ball dances, figure skating or acrobatics. In all these cases, aesthetics and complexity of moves participants make are deciding.

Its just a trick. It so common because 1, it does not require a ton of skill (like a flip, superman, nac nac, etc.) and 2, it doesn't require a whole bunch of air time. Its just a way to show off your skills and improve your technique.

Not the answer you're looking for? Browse other questions tagged mountain-bike jumping or ask your own question.

7
Building my own full suspension MTB: How to I select a frame?
18
What is the purpose of suspension lockout?
3
Should the hands be used for absorbing the impact after a jump?
18
What is the purpose of landing on the rear tire?
5
What is a good method for constructing dirt jumps?
6
Why do riders swing the bike out sideways when jumping?
1
Bike saddle position for mountain biking/jumping?
5
Jumping - What happens if you pull your back/front brake in the air?
2
Do half link chains work on any bike and what is their purpose?