How can I remove very stuck headset spacers (alu/carbon)

Working on a bike that has had significant indoor turbo usage, (i.e. a lot of sweat has run down the headset) and corrosion has bonded the aluminium spacers to the carbon steerer. The steering is stiff and notchy such that the bearings must be replaced, but the spacers are well and truly stuck in place.

I have tried getting some boiling water on the spacers, wrapping a boiled cloth on there, I spent a few hours dripping lemon juice down the gap (I think I read that on Park Tool), I've tried WD40 and have tried turning the top spacer with slip joint pliers (water pump pliers) as hard as I can, but no progress.

I will not want bang on the top of the carbon steerer any harder and the alu piece on top is proud because the bung is seized in place also (still functional). My experience and exploratory taps say that no amount of hitting on top will free this headset up.

How can I remove these very stuck spacers without damaging the frame or fork? I'm hoping for a proven answer because if I continue but damage the spacers further without getting them removed then I potentially make the bike unsafe and so unrideable. 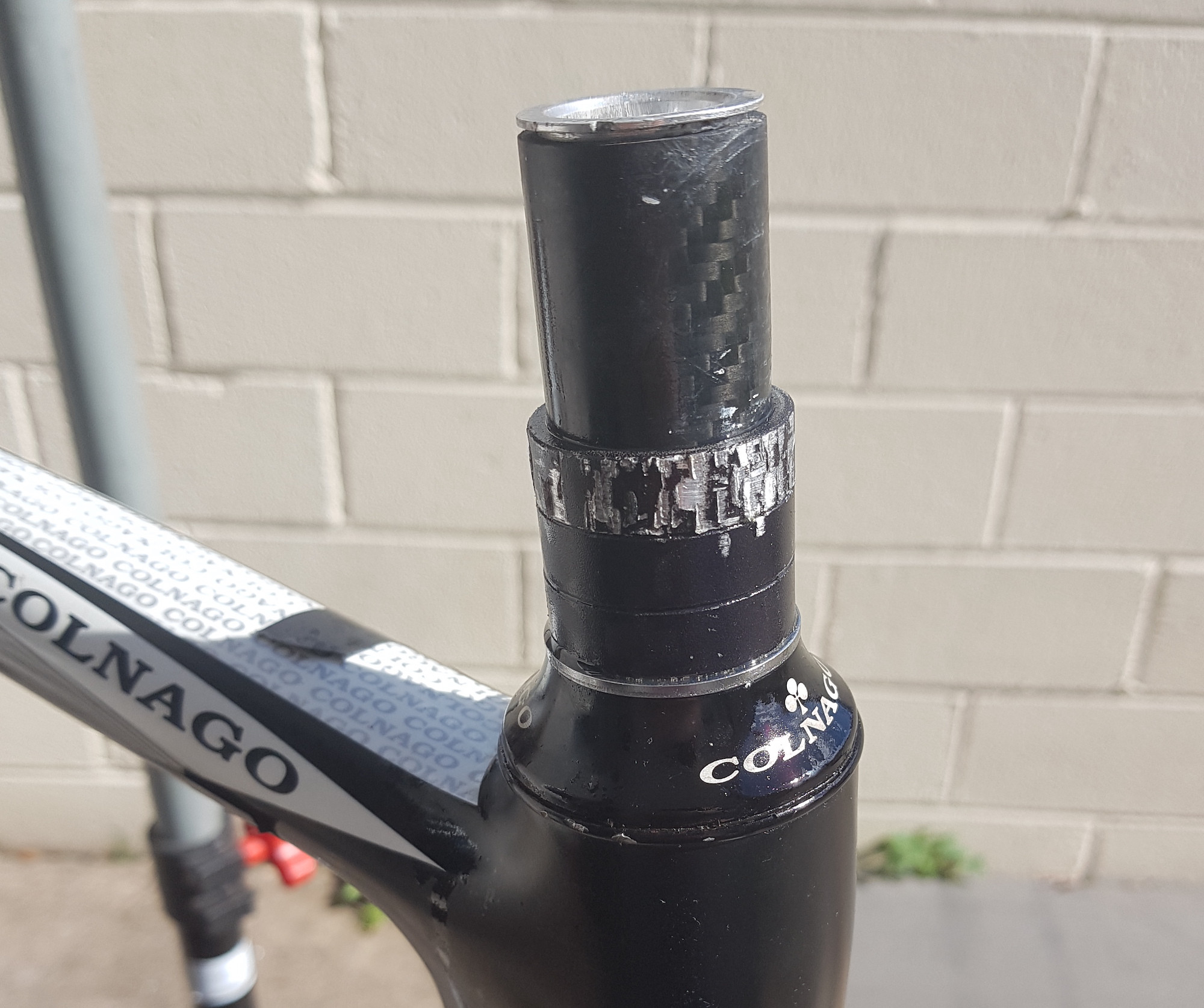 Update: I am still looking for an answer. Nothing forthcoming just yet. I'm thinking that somehow cutting through just the spacers, maybe with a rotary tool, would do the trick, a-la DavidW's answer in the first comment. Maybe cutting not quite all the way through and then forcing the ends apart to pry them off. I asked in my trusted local shop at the time and they said they would do something similar but were too busy to take it on.

Based on Swifty's suggestion, I will make this a formal answer. In summary, I would (carefully!) use a high-speed rotary cutter to deeply incise the spacers and pry them open.

Note that it's probably simpler if you have a router attachment and a suitable bit for cutting metal; most of the rest of this still applies, but making the required cut is much simpler this way.

But if you're like me, and don't have a router attachment, I would start by making a makeshift depth guide by tacking a drill bit or some other reasonably solid piece of precisely-sized metal vertically to the side of the spacers. It would be sized so that with the shaft of the cutter sitting on it, the cutting disc doesn't quite cut fully through the spacer. This eliminates the possibility of a twitch of your hand damaging the fork.

I would then cut the full height of the top two spacers, extending down into the third but not trying (yet) to completely cut it. Since that is likely to abrade at least some of the cutting disc, I would reset and complete the cut.

(Actually, in reality, since at a certain point my time is worth a few dollars extra cost, I would start with a brand new cutting disc, and then instead of changing my guide, I would change to a new cutting disc - or two - to finish the cut.)

I would then try to pry the top spacer off, starting with a single flat-bladed screwdriver and twisting it, and moving on to a pair of them forced in opposite directions. (I'm sure you can MacGyver a makeshift tool with a pair of screwdrivers and a bolt and some wire.) If this fails, I would re-measure the guide and try cutting another fraction of a millimetre off.

The second spacer can be treated the same way, but possibly not the third. Even if you have a router attachment, you're unlikely to be able to safely cut all the way through the last spacer without damaging the top cover (seal). Of course if that is replaceable too, then you can just cut off the third spacer in the same way.

But if you need to/want to preserve the top cover, I would make multiple cuts in the spacer to create 2 notches spaced about 5mm apart such that I can grab that piece with a pair of pliers or grips and physically pull it away from the steerer. The idea being to break enough of the bonding to start to be able to move the spacer. (This might need to be repeated more than once around the circumference of the spacer.) Once enough of the spacer has been dislodged from the steerer, the remaining mess can be pulled off.

I went ahead with the rotary tool (Dremel) and general cutting disc. I cut two grooves side by side in the top spacer and prized one of them open with a flat screwdriver. Once the aluminium is thin enough, it will snap open with a little click, so it isn't necessary to cut all the way through. I carefully cut a little deeper each pass and tested with the screwdriver, managing to find the point it would snap open with the tool never touching the carbon steerer. 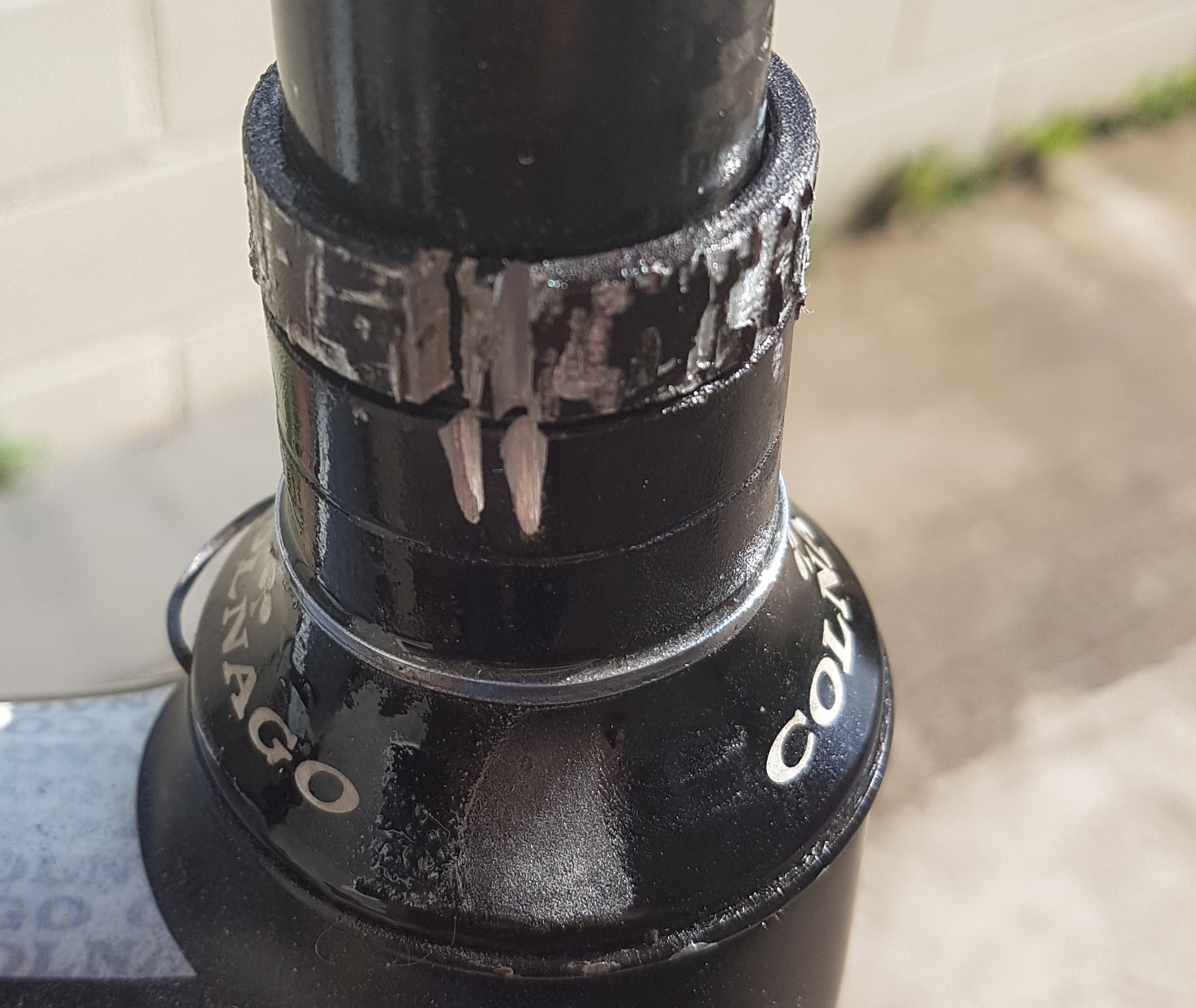 The top two spacers were removed in this manner, but I didn't want to cut through the silver spacer or conical spacer as they would be awkward to replace. That meant I couldn't cut vertically through the third spacer using the 38mm cutting disc. See below, I cut vertically as far down as I could and then ground away the spacer with a horizontal cut until enough was removed to snap open the spacer. That was the hardest part with the rotary tool to avoid damage to the steerer below but with patience it was doable.

It looks a little rough photographed up close, but it was careful and patient work with no damage to any carbon parts and minimal nick to the silver spacer. 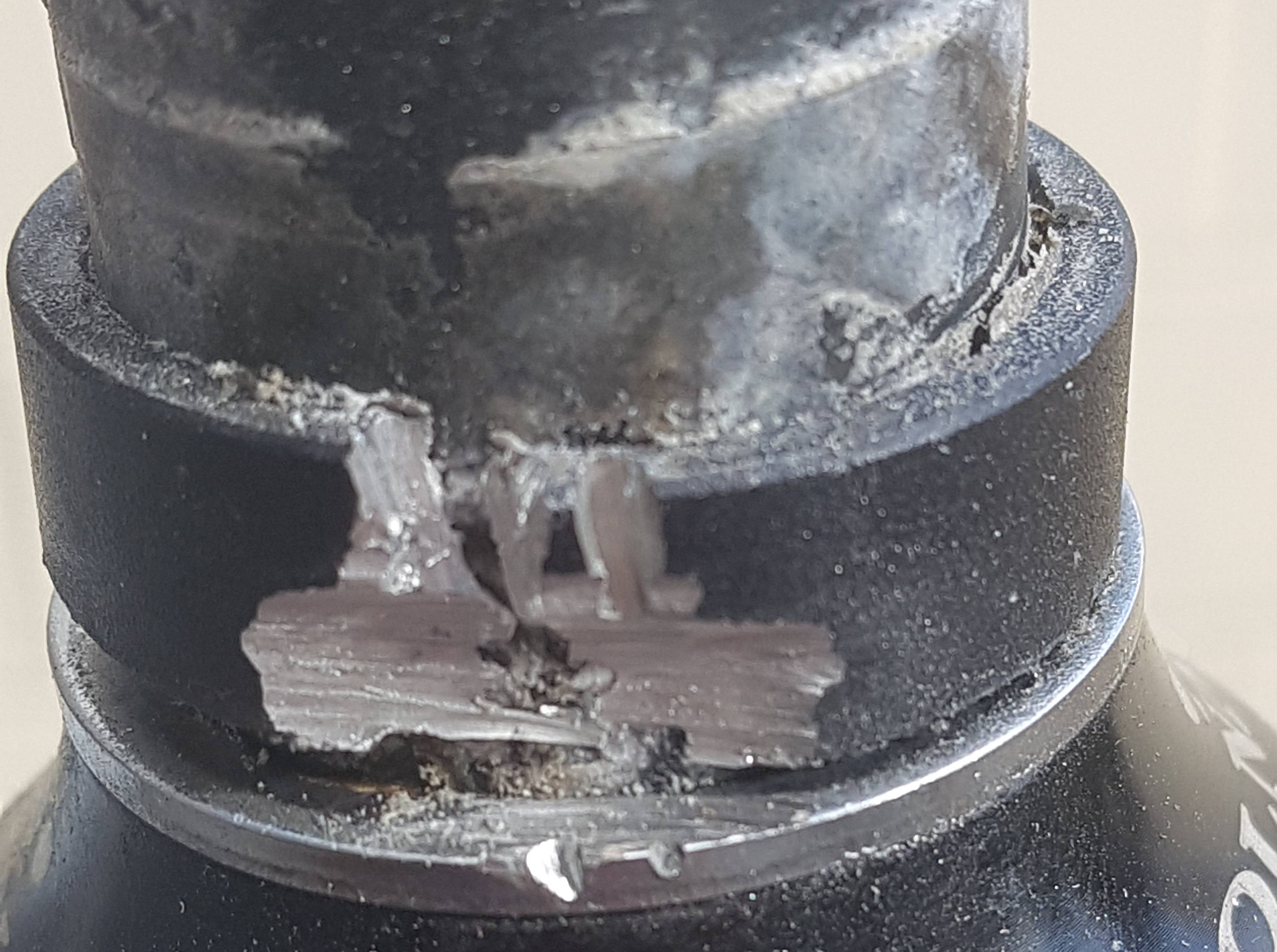 Now I could remove all the spacers and had just the compression ring to remove. This had seized onto the steel inner race of the top cartridge bearing, meaning the whole assembly was still stuck together. I tapped the steerer tube down to raise the ring up and cut through the steel race, minimising touching the compression ring to preserve it. I didn't want to drive the fork all the way down in case the metal would gouge the carbon. The ring did get a little roughed up by trying to prise it up beforehand, so this was treated afterwards with a file to remove the burrs. They were really stuck together and even off the bike it took some force to separate them. 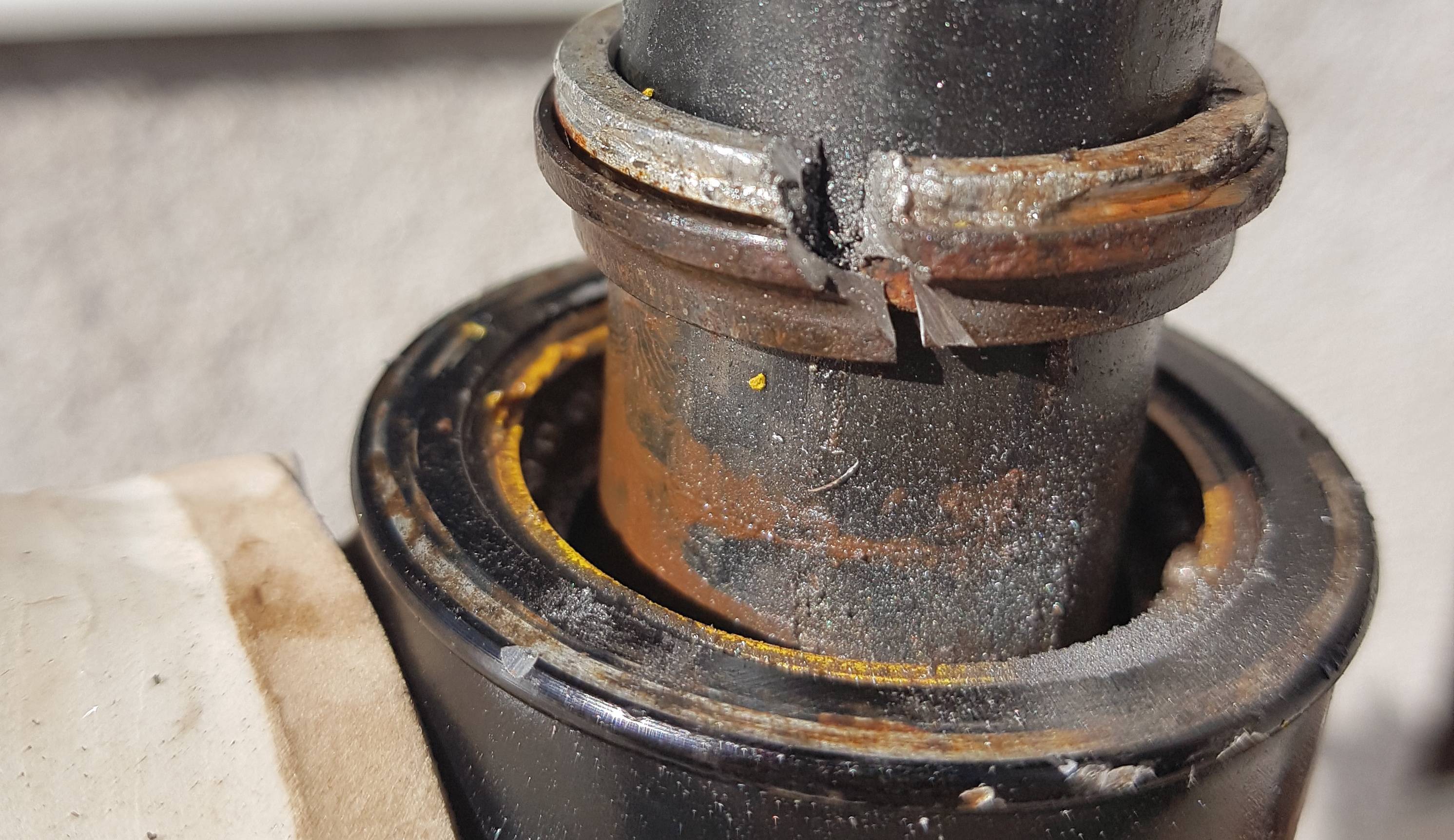 The old bearings were removed and everything else cleaned up nicely. New bearings and spacers went on and the steering felt like new again.

Get a pair of channel locks - https://amzn.to/2WOt1CA 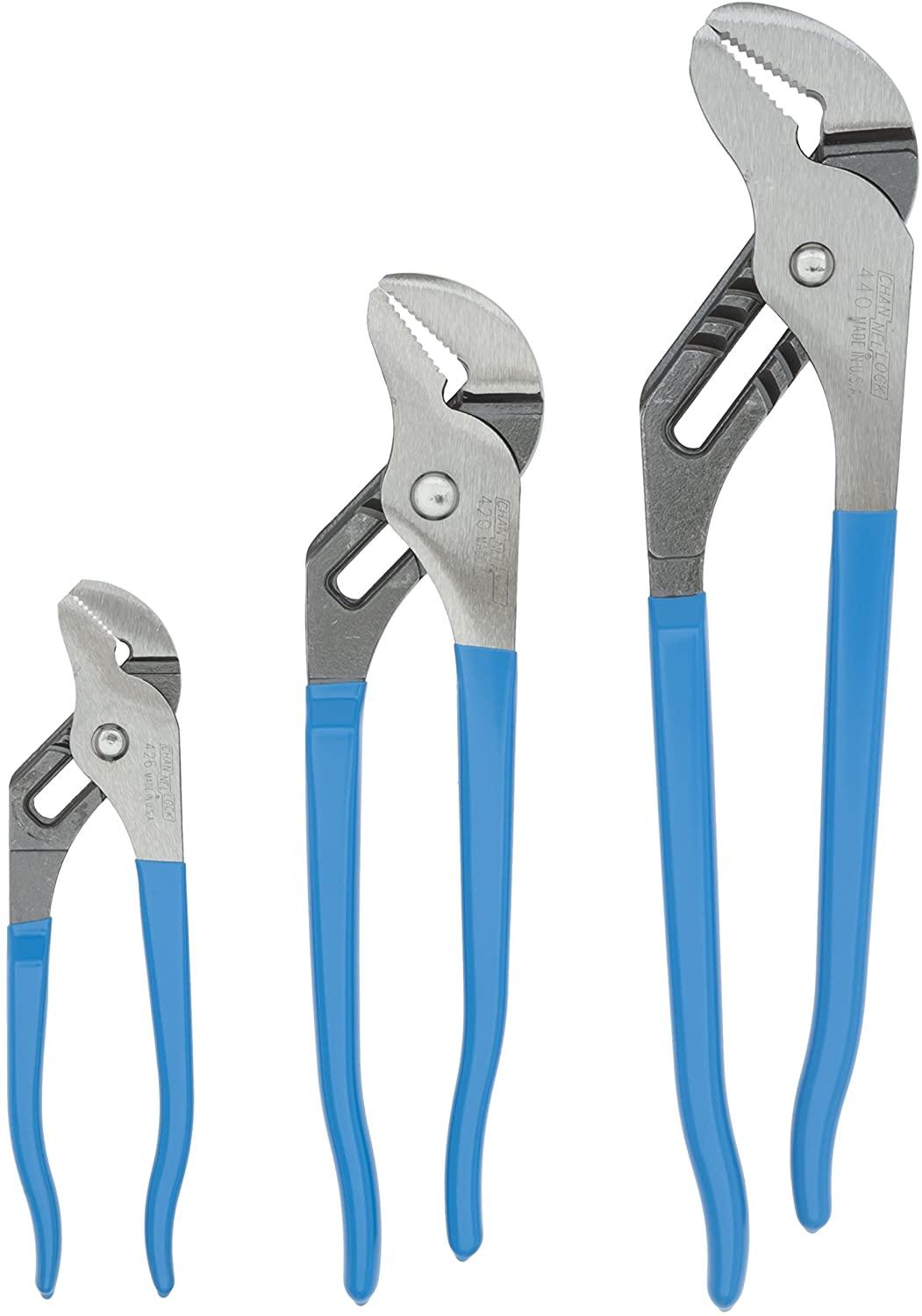 Grab the spacer tight (perhaps put a thin shop rag between it and the spacer to minimize gouging and use brake clean to remove lube from the outer part of the spacer) and try to get it to spin a bit or hit the end of the channel lock with a mallet to try to free the spacer. Once you get it spinning a bit it probably will slide right off. If it does not spin, spray the lube, let soak, and repeat.

Let us know if that works. Channel locks have never let me down to be able to apply solid force to turn something loose and it often times is more effective than smaller slip wrenches that will slip and cause more surface damage to the items you are trying to loosen.

Alternatively you could try putting a piece of wood above the top of the fork and hitting with a mallet after letting the lubricate soak in to see if you can get it to budge a bit.

I have not read every answer here, but there may be some advice here that helps: https://forum.bikeradar.com/discussion/13062999/spacers-stuck-to-fork-please-help-images

Based on the comment below I thought about another approach that could work. A strap wrench. I have used these on plastic components that were stuck together on a car and I used it periodically for other things. It applies its forces purely rotationally and distributes the inward forces evenly. I would still feel ok with the Channellocks since you have a piece of aluminum that you would effectively have to bend before getting into the carbon, but it would not hurt to start with a strap wrench first- https://amzn.to/2Mc26yH 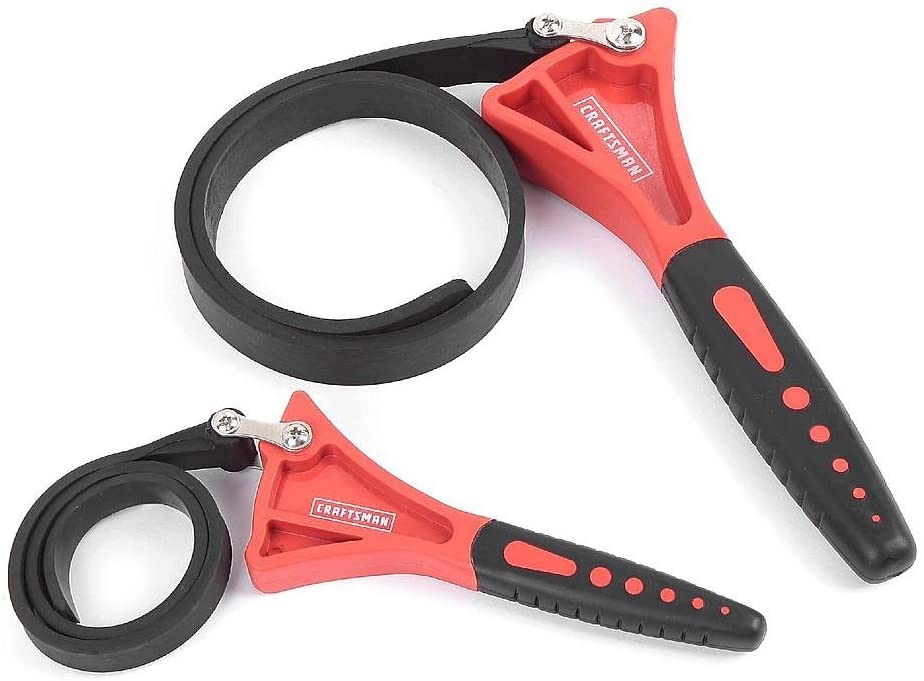 To me it looks like your compression plug inside the steerer tube is expanding the tube to a point where the spacers got stuck.

Have you tried removing the plug? Usually there's a 6 or 8mm allen bolt inside you can loosen. As it might be tight from corrosion I wouldn't recommend unscrewing it completely but just a few turns and then try to pull it out before loosening again. Otherwise you could drop the lower part of the expander into the steerer tube and that (from my own experience) sucks.

Not the answer you're looking for? Browse other questions tagged fork headset steerer corrosion or ask your own question.

3
How many headset spacers might I need?
3
Safe steerer spacers stack height
2
Can a threaded headeset be converted to a threadless headset
2
Do I need to remove & service integrated headset bearings when replacing fork?
2
Help finding correct headset for Focus Izalco Max Disc
2
Tightening steerer expander/compressor and spacer positions with a carbon fork
0
How can you remove markings from a headset?
2
Headset problems
3
Stuck Compression Plug and Top Cap Screw