I have bought, just 2 months ago, a new Cube Hyde Pro 2020 bicycle with belt drive (Gates, rear cassette out of metal, CDC with 22 teeth) Shimano Nexus 8 internal hub (model SG-C6001-8D). I mostly ride in the city and sometimes for fitness purposes. Bicycle link with specs: cube.eu

Overall I am happy with the bike. It rides quiet and comfortable but I have noticed that under high torque situations like short steep inclines or fast take offs a single sharp and unpleasant clunking noise can be heard from the gear hub. This happens in all the gears. I have tried to catch this noise on camera and took a video of it on my daily commute on a short steep incline and gearbox in 1st gear: Youtube video 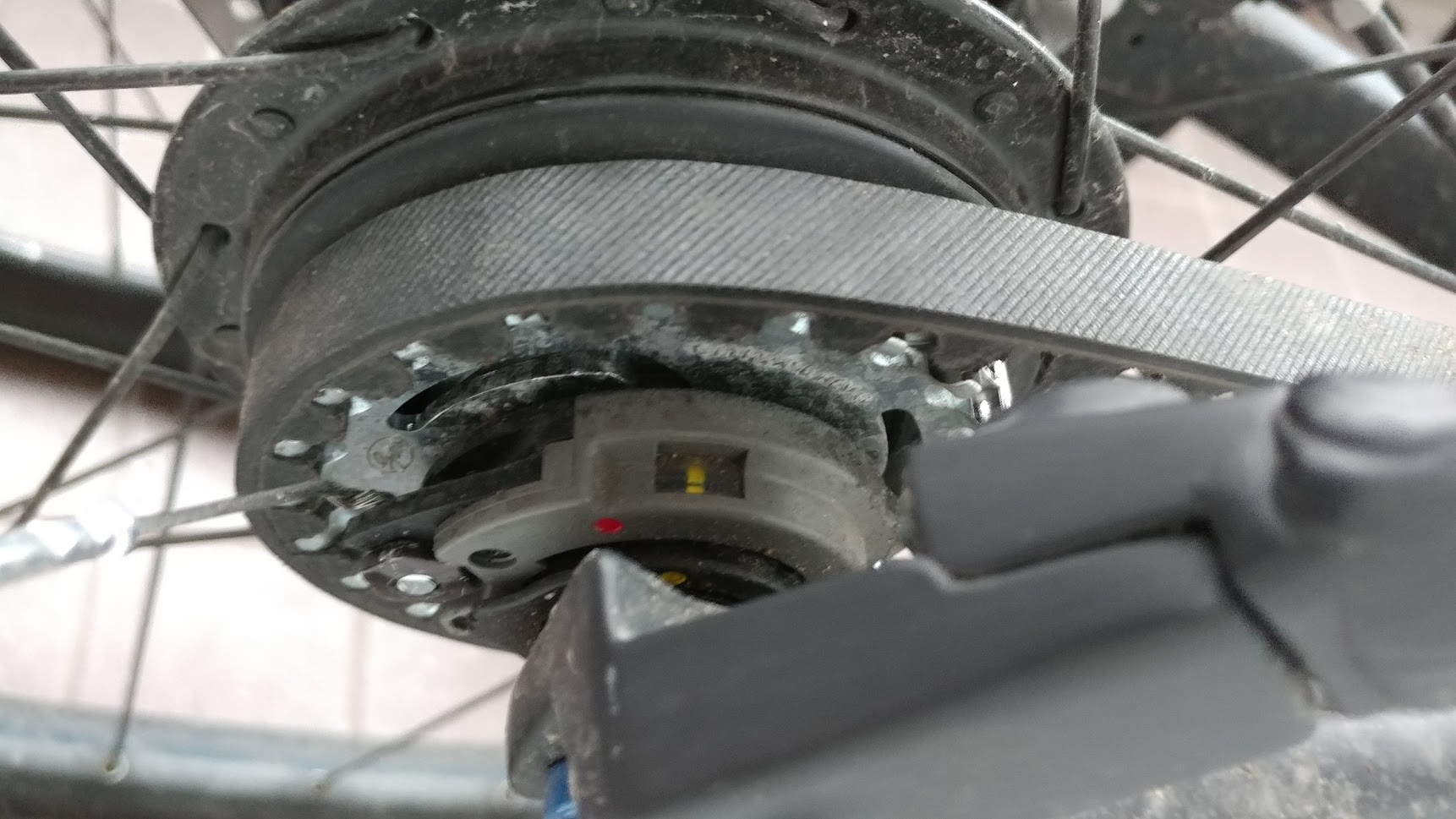 I would greatly appreciate any help or input from you. Even if you don't have the solution but have observed the same behaviour please reach out and maybe we can find the solution together.

There are some Nexus and Alfine bikes that have made it out into the world with a spec mismatch between the over and under style cassette joints and the shifter.

The cable pull sequence works in reverse order between the two shifter types. Because the cable pull for this system varies with each click, everything gets screwed up if you then use the setup marks. Something like what you're experiencing can result.

To check this, get your exact cassette joint and shifter models and make sure they're listed as compatible on si.shimano.com.

If that checks out, test it with less belt tension.

If that's not it, get oil dunk gear and the Nexus/Alfine notchy tool, pull the core, wipe, inspect for anything out of place or prematurely damaged or worn, dunk, grease, reassemble, and see if that fixes it.

One perfectly likely explanation is that the pawls that drive the shell are having engagement problems. If one or more is under-lubricated, deformed, or out of place, it could cause a partial engagement problem, which also fits the symptoms. This can lead to a situation where the tips of the pawl(s) get damaged and the problem gets worse. This is easy to inspect for once the core is removed. Note that despite the ostensible complexity of the hub, the pawl system in question is the most exposed part of the whole deal, being the interface between the drive ring inside the hub shell and everything else. If it does the same behavior with the cable disconnected completely, I think this pretty likely is what's happening.

It is true that everything about this should be covered under warranty. Between parts shortages and the usual awkwardness of getting warrant support to happen for mail order bikes, it may get hairy at the moment.

Also check dropout alignment slash sync up slider fore/aft if applicable, all of which can in theory cause hub badness.

After several suggestions and trials I think I have resolved the issue.

I tried adjusting the cable tension away from the yellow linup mark. And by away I mean 0.5-1 turn of the adjuster. Also I decreased the belt tension to ~25-30hz which is a bit below the recommended 35-50hz range and so far so good! I can take the same slope without the loud bang, and shifting feels a bit smoother.

I will continue observing it's behaviour and still try to avoid applying to much torque to the system. Its crazy how sensitive these hubs can be and also how the yellow mark can be a bit off and misleading.

Not the answer you're looking for? Browse other questions tagged shimano internally-geared-hub noise nexus belt-drive or ask your own question.

12
How to prevent Alfine 8 from "skipping"/"slipping under load?
0
The crank arm slips when pressing hard on pedals with Shimano Nexus