Completely new to indoor cycling, is there a MUCH cheaper alternative to power meter that would be compatible with the RGT app?

I'm planning to get a cheap, not-smart mag trainer, to cycle inside. I'm currently a stay-at home mom and I would like the cheapest, yet enjoyable app-wise, set up for indoor training with virtual riding. I really like what I read about RGT- no cost to use the app, BUT it seems like you must have the equipment on the quite expensive end of the cost spectrum. Here is their site's compatibility explanation.

Am I right in this assessment? Is there some type of computer alternative to a power meter that you think could work with this app? I have NO idea what's out there apart from basic speed/cadence sensors which I cannot use for this app. I imagine that is because the virtual ride uses LOTS of specific data from your own ride to make it more realistic and awesome.

I imagine I will end up buying a basic speed sensor and use another app I have to pay for. (Yuck to paying a monthly price for an app. I'm super cheap). Before going that route, I wanted to see if there was any type of alternative buy that may pay for itself over the course of x number of months if I use RGT as a free app vs. paying monthly for an app. I'm also happy to hear any opinions about the following apps which seem to have the journey cycling feel I would enjoy: Ful Gaz,Rouvy, Bkool, Zwift, another unknown to me, etc.

About my cycling, if it is relevant: I am a casual cyclist who enjoys leisurely, outdoor cycling and I often seek out new trails. Before I was a mom, I did do longer rides (30-55 mi) so I think I will actually cycle indoors especially if I have a virtual path, BUT I am definitely not a hard-core cyclist trying to get best times. I'm not even looking for an especially tough work-out, although I am competitive in general and would be motivated most by a "self-competition"- something where I could see previous time on same course, etc. But on the whole, I simply want to enjoy getting exercise regularly inside and, the kicker.... I would like to do it for about as cheap as possible.

You can basically use any trainer with a powermeter (I would call it a "smart trainer" but others do protest too much). The cheapest ones start at 200€, better ones, with a more accurate power meter, say 300€. There is no need to have a powermeter on your bike. These trainers are not that much more expensive than the copletely dumb ones. You are looking for Bluetooth or ANT+ connections. A powertmeter in atrainer is easier to make than a bicycle poweemeter and hence much cheaper. Bicycle powermeters cost as much as a whole trainer.

"Smart" trainers, or trainers with a powermeter in general, normally calculate the power you are performing against the brake automatically. Some are more accurate, some are less accurate. Some virtual competitions require only certain more accurate devices. But for a smart trainer you do NOT have to measure the speed of your wheel and have the RTG or Rouvy or Zwift or whatever other app to calculate your power from your wheel revolution speed. The trainer is calibrated and is giving you the estimate from its own powermeter - more accurate or less accurate, but its own automatic estimate nonetheless.

Also you do not need a subscription-based app for training with a smart trainer. A basic app is normally included and if not, there are alternatives available. It normally includes various power-based exercise programs.

You only need subscription for advanced features, especially for virtual rides and online riding with other people, for special training programs and related.

I won't do any product recommendation, there are many products. Some are using a wheel driven by your rear tyre (the basic ones), some have their own axle and cassette and you connect it instead of your rear wheel (direct drive). They use different braking mechanism (hydraulic, magnetic...) and differ in the level of noise and many other factors. You have to do some research yourself.

Weiwen Ng linked a nice survey of trainers https://www.dcrainmaker.com/2019/10/the-smart-trainer-recommendations-guide-winter-2019-2020.html You can do a web search and fine many other reviews and surveys.

I'll answer in a very general sense. For virtual cycling, the program or app needs to know how fast you are going. This is a function of what power you are producing. The simplest solution is to have some sort of power meter on the bike or on the trainer. These typically sense the torque you generate (i.e. how much you twist some part of the bike, e.g. the crankarms).

On the road, your speed is also influenced by how much air resistance you are facing, and the gradient of the road, the rolling resistance of your tires, and many things. The resistance unit in your trainer doesn't match the resistance produced in real life, so while we could calculate your virtual speed, it would not be accurate in a simulated ride or in real life. However, for each trainer, we often know the trainer's power curve, i.e. how much speed a given amount of power should produce. Here is the set of power curves for each of the 10 resistance levels that Wahoo Kickrs can generate: 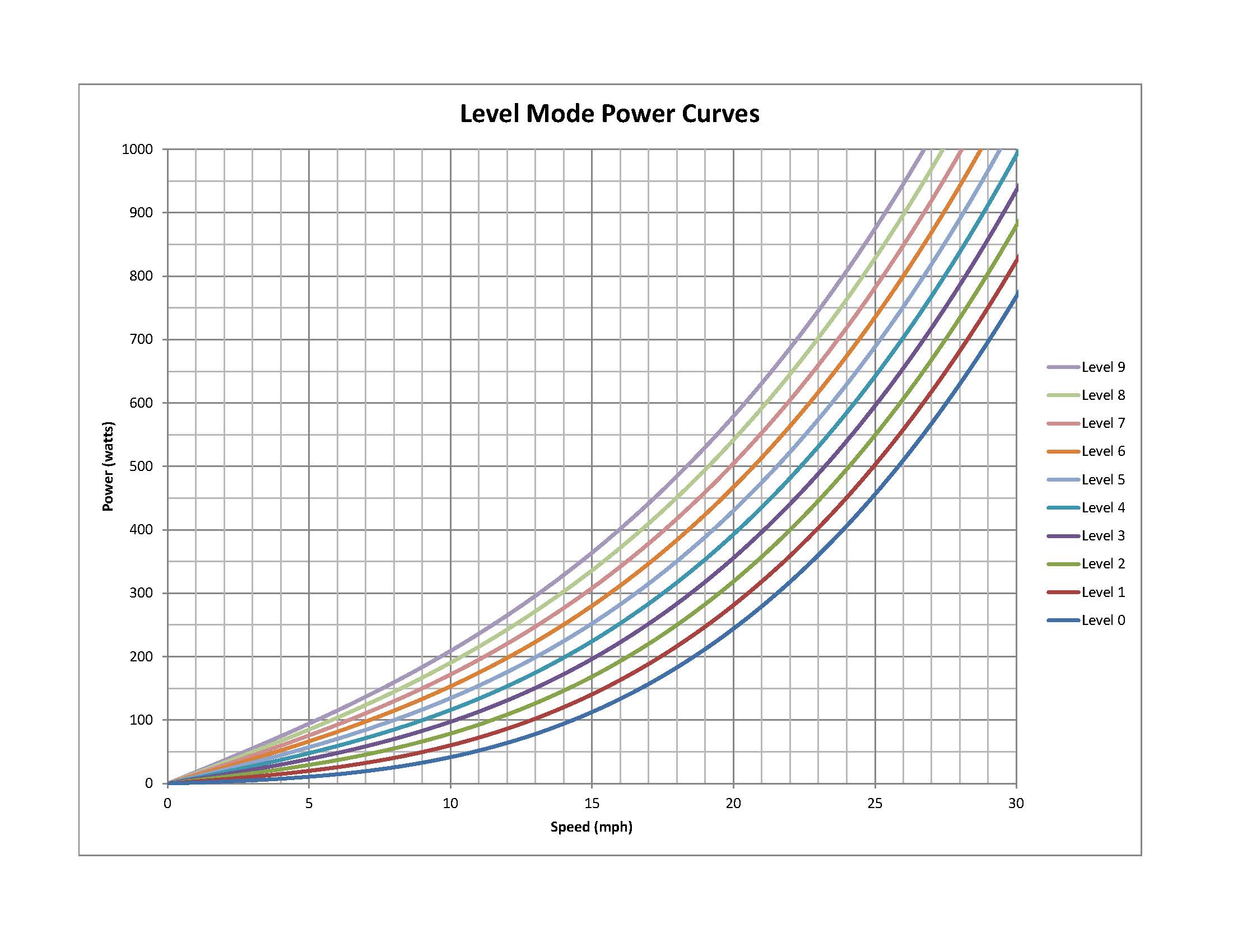 Thus, it is theoretically possible to estimate your power on a trainer via software, a speed sensor on the rear wheel, and the trainer's resistance curve(s). Unfortunately, either the virtual cycling app needs to calculate power from these resistance curves (sometimes called virtual power), or you have to have some sort of device estimate power from your trainer and broadcast that (via Bluetooth or ANT+) to the virtual cycling app.

In the former case, it doesn't seem like Road Grand Tours (RGT) has implemented virtual power. TrainerRoad and Sufferfest both do, but they don't build a virtual cycling world, and are really oriented at serious athletes who want power-based training. TrainerRoad has some free functionality, but it's very limited. I believe that Rouvy, and Zwift also offer virtual power in their respective apps, and are somewhat along the lines of the app the OP is looking for, but they're subscription only.

In the latter case, I was not aware of any app or device that does this when I first wrote the answer. However, see R. Chung's comments about older trainers and aftermarket power modules; in particular, Kurt Kinetic trainers can be refitted with a unit called inRide that broadcasts as a power meter. Other similar units may exist for older trainers, but I haven't investigated.

Perhaps more apps will come to incorporate virtual power over time, and it's possible that an open source virtual cycling app might evolve. However, we do often have to pay for useful things. In this case, the app's engineers would need to find the power curves for each trainer (and possibly keep adding them as trainers get introduced), and then implement some sort of calibration procedure, and possibly other actions. It's worth noting that you don't have to keep an app subscription indefinitely, so you could subscribe only for the months you aren't riding outside. Alternatively, the winter months can be a good time to try alternative fitness activities, e.g. hiking or running. Normally, I would recommend investigating fitness studios around you for indoor cycling classes or alternative activities, but these are not normal times, as you know.

(For future readers' reference, we are currently in the COVID-19 pandemic, which started in early 2020. The virus is lethal and transmissible enough that we have to take significant caution; if gyms are open, they may require you to be masked even while exercising, and this does not eliminate the risk. If you've heard that this was no worse than the flu, they forgot to mention the part where they put the flu virus on EPO, blood transfusions, testosterone, and who knows what else.)

Given your last paragraph where you describe your objectives, do you need a power meter at all?

Do you want to know if your performance is improving? If you leave the trainer on a fixed resistance, you can quantify your performance by measuring distance. If the trainer or your bike doesn't already have this capability, there are very inexpensive bike computers that sense distance with a magnet on the wheel.

Do you want to pace intervals? For short intervals, you can use "relative perceived effort" or "RPE". Basically, just do it by feel. And for longer efforts, heart rate works well. Heart rate sensors are more expensive than speed sensors, but much cheaper than power meters.

The only thing about your question that makes a power meter seem required is the RGT app, which states:

Classic Turbo Trainers only in combination with power meters.

One way around this: use a different app. For example, Zwift has virtual watts. So does TrainerRoad. Also The Sufferfest. These work by measuring the speed and estimating the resistance of the trainer, and calculating power from that.

Otherwise, you can fake it. There are apps like HR2VP which use heart rate data to guess at power, or the PowerTap PowerCal which is essentially the same thing all contained in the HR sensor hardware. These will make RGT happy, but just be aware these aren't actually measuring power and won't be any more accurate or useful than the suggestions above that don't use a power meter.

Estimating power from heart rate can be fairly accurate for sustained efforts, but since heart rate doesn't respond immediately to effort it will be way off for short efforts like sprints. It will also tend to drift as you fatigue, and it will be influenced by thinks like caffeine and sleep.

Congrats for getting on the bike.

Consider that virtual riding is expensive, and you might be perfectly happy with a pen and paper to record your distance and time.

Most of the exercycles have some form of readout of which you can take notes. If you have a resistance trainer for your bike, then a cheap cycle computer might be sufficient, by fitting the magnet+sensor to the rear wheel and read off the numbers at the end of your ride. 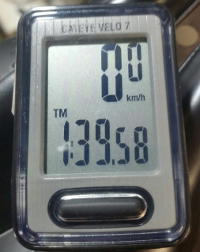 Doownside, this won't let you partake in virtual rides like zwift etc.

1
Touring as a noob... Daily duration and distance?
6
Take away bragging rights, Strava's kudos, and the sense of achievement, why does the pursuit of a (metric/imperial) century matter?