Need help understanding my grip shifters on my handle bar

I am new to mountain bikes and recently bought the Apollo Phaze bike. I was wondering if anyone can help me understand the functions of these gears and when to shift them. For example, when commuting to uni and back, I have travel over hilly paths and I was wondering which gearing options would be best for going uphill and downhill. There are 2 types of shifters on my handlebar, one shifter is for speed as stated on the shifter and the other shifter is for friction or something, I am not quite sure. For some perspective, I have attached the picture of my gears. I hope someone has some information to help me understand the shifters better. 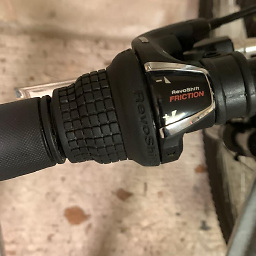 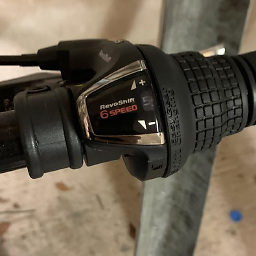 The shifters are operating by turning the grip front and back (like a motorbike throttle).

The front shifter is on the left. You must learn how to find the right position yourself, because it is a friction shifter, you can move it continuously. After the gear is shifted you must yourself find the position that does not make any bad noise.

The rear shifter is on the right side. There are 6 predefined positions for those 6 speeds, that means 6 different sprockets, chainwheels, at the rear derailleur.

You turn the right/rear shifter towards you to shift to an easier gear/larger cog in the rear.

You turn the right/rear shifter away from you to shift to a harder gear/smaller cog in the rear.

You turn the left/front shifter towards you to shift to a harder gear/larger cog at the front.

You turn the left/front shifter away from you to shift to an easier gear/smaller cog at the front.

If you want to look on the numbers, then the smaller the number indicated, the easier gear is selected.

The gear is not changed immediately, you must turn the cranks that hold the pedals first after operating the shifter. Do not push too hard or the chain can fall or get jammed.

When you want to go fast on a flat or downhill, you select a larger wheel in the front and a smaller wheel at the rear. That way you do not have to turn your pedals too fast.

As others noted, you should try to change the front gear less often and the rear gear more often. But everyone develops some personal style of shifting after some time. It is important to adjust your shifting to avoid those bad habits that lead to fallen or jammed chains. Especially, do not shift under load. The cheaper the drivetrain is, the worse it copes with bad shifting. Expensive derailers can shift multiple gears at a time, but try to avoid it with yours.

The different size chainrings in the crank provide larger jumps in gear ratios, the smaller sprockets on the wheel provide smaller jumps. There is quiet a large overlap between the gear ratios available when on each of the three chainrings.

The general idea is that you select the appropriate front chainring for whatever gradients are coming up, then make adjustments with the rear gears to keep you pedaling at a comfortable rate.

Probably a good way to start out is to put the chain on the middle front chainring. Use that as your default Start out riding and use the rear shifter only to change gears - that way you'll get used to the rear shifter and how it works first.

You'll probably identify places where you need lower gears to get up slopes. Now bring the front shifter into play. Before you get to the hill, change down to the smallest chainring, then immediately change the rear shifter up two gears, this will put you in about the same gear ratio you were before changing the chainring, as you go up the slope use the rear shifter to progressively reduce the gear ratio and keep pedaling at about the same rate.

If the slope is steep, make sure to change down gear ratios in advance. Derailleur gears do not like it when you change gears at the same time you are pushing hard on the pedals. Once back on a flat section, change the chainring back to the middle.

Not the answer you're looking for? Browse other questions tagged mountain-bike gears shifter beginner or ask your own question.

1
First time buying parts ( derailleur, chain, rear axel, shifters) need help!
1
RevoShift Friction: shifting to the largest gear takes a lot of force?
1
9 speed cassette and 7 speed shifter
0
5 Gears usable out of 6
2
What are the steps required to revert from STI shifters to friction shifters?
1
Wanting to change from bar end to road shifters
11
Why is my average speed so low?
9
Shimano Revoshift twist grip unusably tight
2
I want to upgrade my 2020 Allez from Claris to Shimano 105