Are Penny-Farthings Legal to Ride on Public Roads (UK)

Are Penny-Farthings legal to ride on public roads in the UK?

Note: For laws regarding riding Penny-Farthings on public roads in other countries-ie "US" or "EU"- please start a new question with the same title and just replace "(UK)" with the "(US)", "(EU)" etc... so things are logically ordered into taxonomies. It will be a tangle otherwise...

I ride a 50" Penny-Farthing almost daily on the UK's public roads, both individually and as part of groups in daylight and evening conditions.

Before venturing out onto the UK's roads when I began my Penny-Farthing journey, I asked myself this very question. And when people see me on my PF, many will invariably ask me: "Is that thing legal to ride on the roads?!?!?"

Initially had to piece together an understanding from a gazillion different sites. This answer hopes to centralize this research into a single comprehensive, authoritative PEER REVIEWED source for riding Penny-Farthings on public roads in the UK ONLY. And save the reader the grief of hunting-down this information across many sources.

Please alert me to errors or omissions you may spot in the comments section and I'll revise the answer accordingly.

"Yes", but only if you observe all the traffic laws you're required to riding a regular "safety" bicycle (those odd things with symmetrical wheels) and your Penny-Farthing has the minimum safety equipment required by law (see "LONGER ANSWER" for specifics).

A Penny-Farthing is a bike, albeit a direct-drive bike without symmetrical wheels, but nonetheless still a bike and subject to the same laws as any other bicycle ridden on Public roads.

The guidance in this post is based on prevailing laws at the time of writing. Laws changes over time, and with the rise of "e-Bikes" I expect cycling laws will be revisited in the near future. Future readers are advised to give me a heads-up if anything becomes out of date and I will revise this answer accordingly.

Obedience to ALL Traffic Laws:

Braking/stopping on a Penny-Farthing brings challenges one doesn't encounter riding a "safety" bicycle where you can put your feet on the ground at a halt. Nonetheless you still must stop at red signals, yield to traffic on your right at roundabouts and signal changes of direction. If you cannot perform these fundamental operations competently on a Penny-Farthing, even if your PF is appointed with all the correct equipment which is described below, you shouldn't be riding it on the public roads.

Regulation 7 of The Pedal Cycles (Construction and Use) Regulations 1983 defines the legal requirements for brakes on a pedal cycle. As a Penny-Farthing is a "fixie"- a direct-drive bicycle where only one wheel is operated by the pedals. 7(1)(b)(i) of the statute requires only a SINGLE braking system.

UPDATE: I asked Roger @ unicycle.com- who is the manufacturer of the popular UDC Penny-Farthings of which I'm a rider of- to review my answer for correctness and he states that Rule 9.1 trumps Rule 7(1)(b)(i) in respect to brakes on a "fixie".

9.(1) Nothing in Regulation 7 or 8 applies to -(a) any pedal cycle so constructed that the pedals act on any wheel or on the axle of any wheel without the interposition of any gearing or chain; 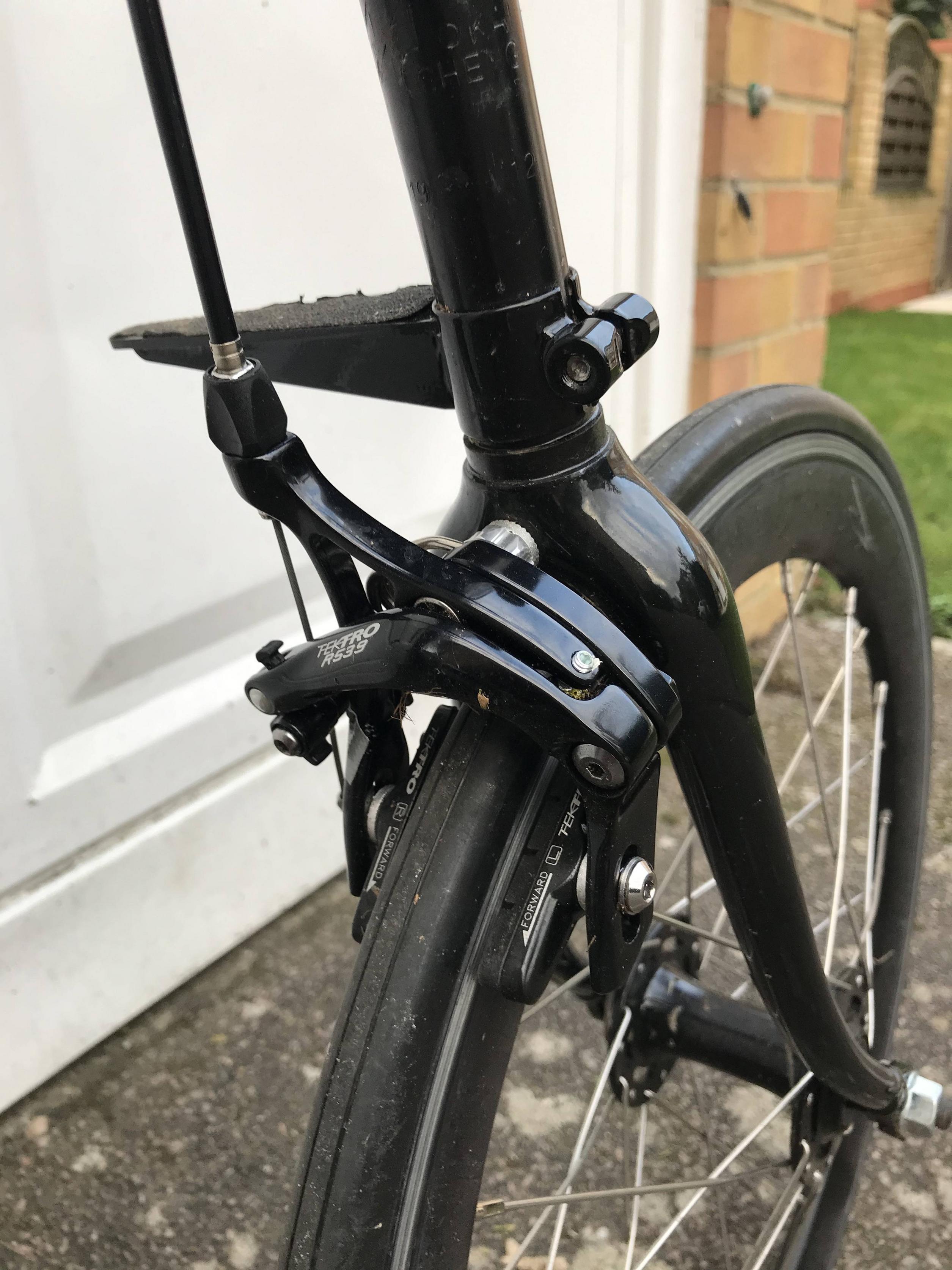 "The Road Vehicles Lighting Regulations 1989" governs the lighting cyclists will be required to have. The "Explanatory Note" section of which details that "sunrise" and "sunset" now replace “daytime hours” and “hours of darkness” which included a half hour before each. Thanks to @thelawnet for the correction- well spotted!

I ride my Penny-Farthing frequently at night, so I not only meet the legal minimums for lights, I seriously exceed them. ;-) 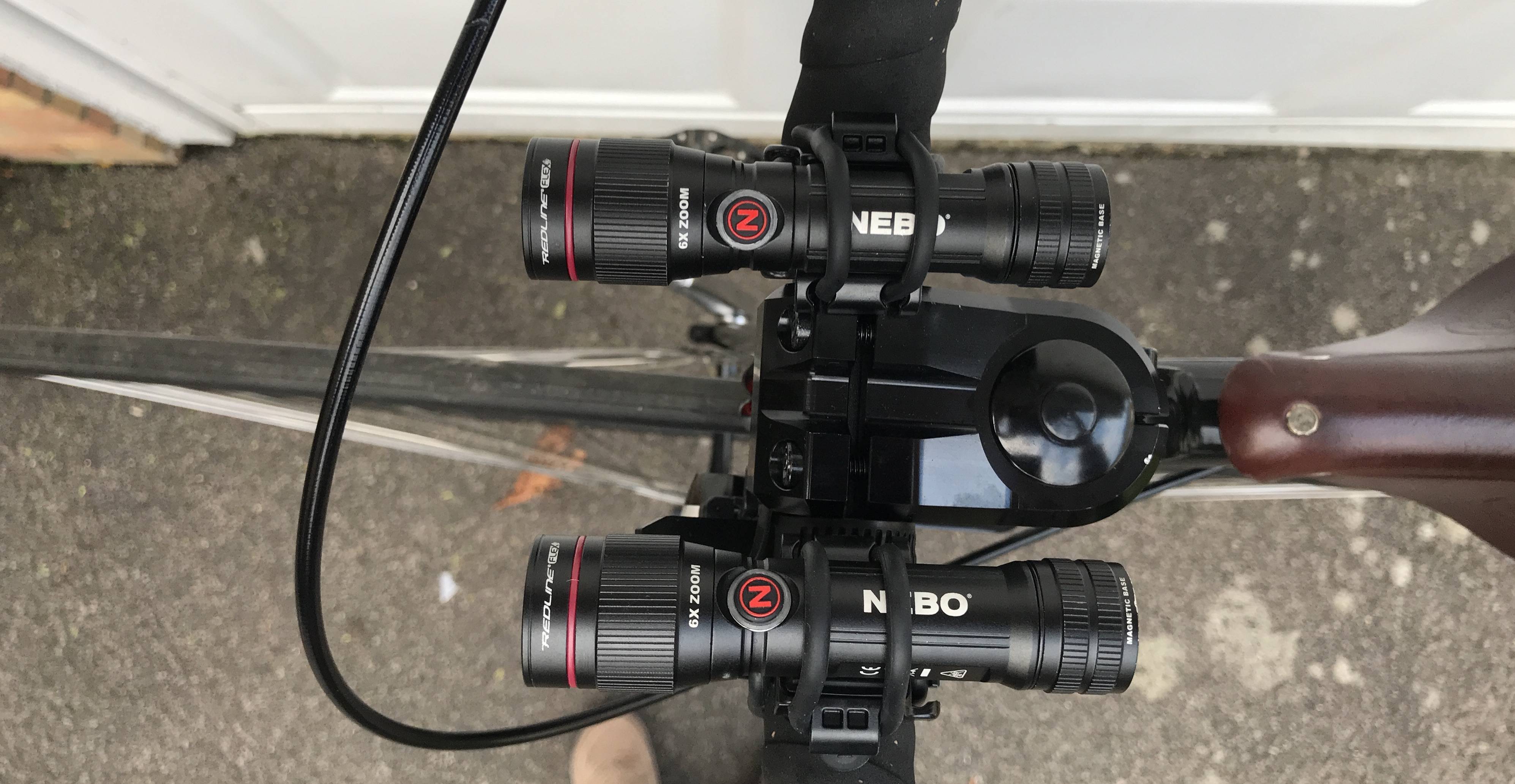 One flashlight set to steady the other to rapid flashing 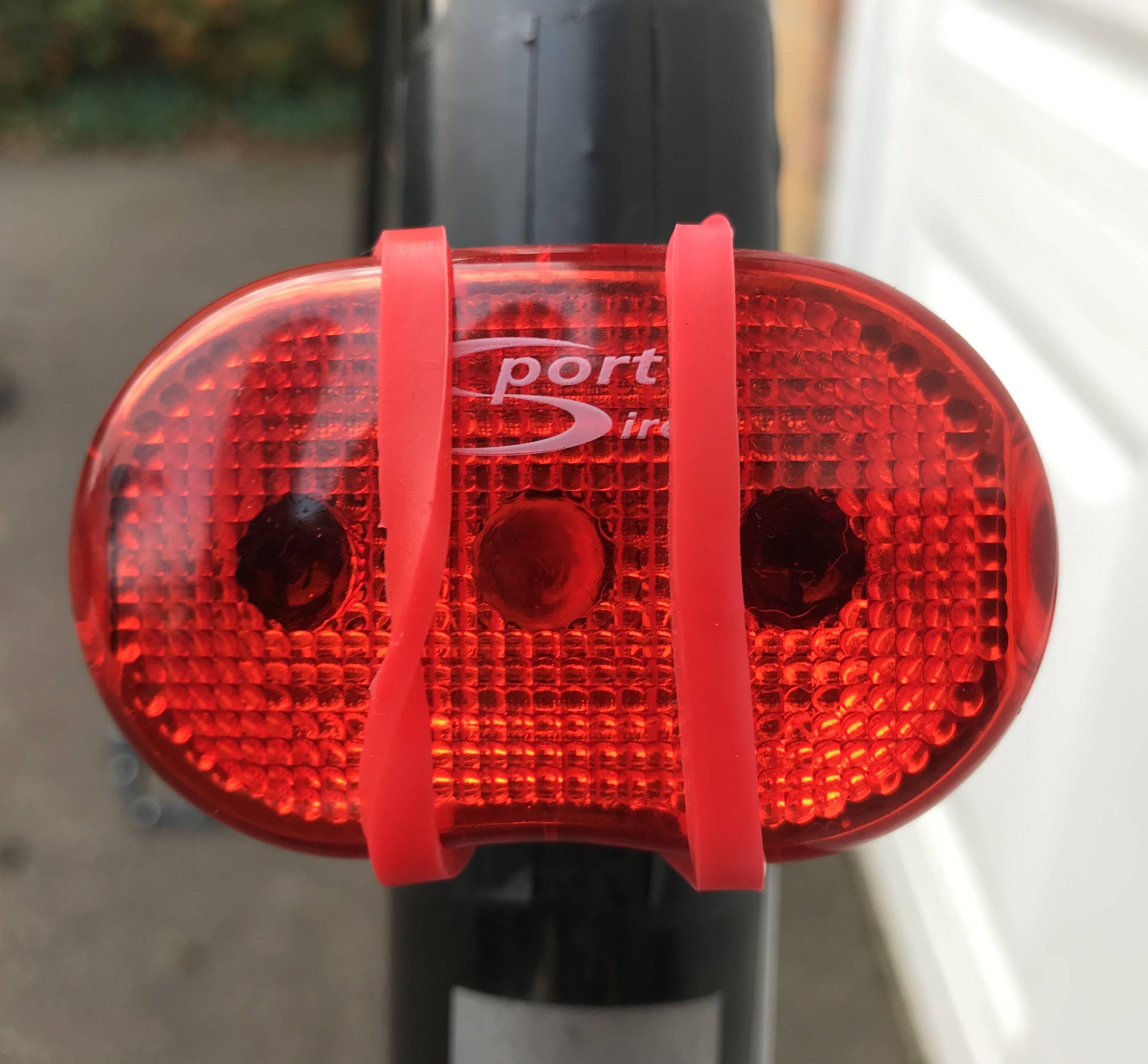 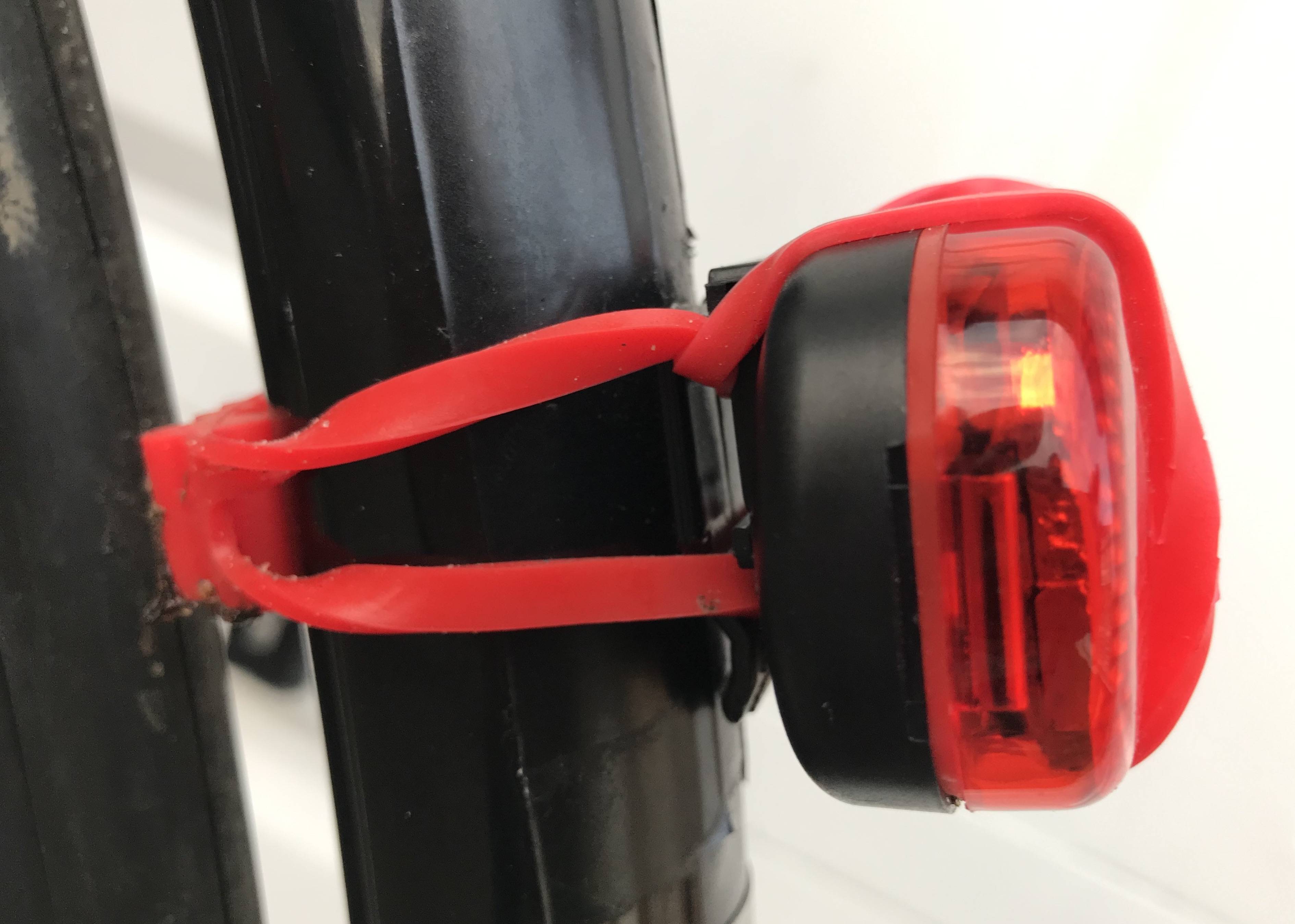 The spine is too thick for most light mounts I got around the problem by using a silicone band bought on Amazon to attach; works perfectly.

I couldn't find any reference that states a bell is a legal requirement, but you'd foolish to cycle without one. And if it's true that it's a legal requirement to SELL bicycles with a bell (haven't been able to track down a link to this yet), the odds are you already have a bell anyway...

EXCEPTION: Northern Ireland: a bell IS a legal requirement in NI, unlike the rest of the UK.

If you toodle home from the pub pissed on your Penny-Farthing and are caught in such a condition by the Police, it can attract a £1000 fine. Although technically your vehicle license can't be endorsed with points or directly lost for cycling unfit, you could still lose your vehicle license.

And if you are involved in an accident, I'm sure whatever cycling insurance you have will likely be invalidated.

Who doesn't like toodling to a pub on a their Penny-Farthing for a pie and a pint? Just take care not to over-do it...

Unlike a motor vehicle, cyclists are NOT required by law to have liability insurance. HOWEVER, strike some pedestrian who steps in front of your Penny-Farthing listening to music with their earbuds and you'll wish you did. And stopping a Penny-Farthing is a bit more challenging when responding to the presentation of a hazzard.

I emailed British Cycling- who provides my liability insurance with my "Ride" membership- and directly asked them:

I ride a Penny-Farthing- which is legal to ride on the UK's public roads. However, this is a direct-drive bicycle- the pedals are affixed to the wheel and drive it directly in lieu of gearing. Is this covered under my membership liability insurance?

They replied IN WRITING to this question that it WAS:

Yes I can confirm you are covered on a penny farthing.

So now I am 100% bullet-proof if anything happens. I'd suggest asking for such a confirmation before agreeing the policy so there's not grief later if you're involved in an accident riding your Penny-Farthing.

So I can confirm AT LEAST British Cycling DEFINITELY provide Penny-Farthing cyclists liability insurance with their "Ride" membership.

In addition to the other links, I've consulted the below sources:

Inthe UK. A Penny-Farthing is a bike, albeit a bike without symmetrical wheels, ((unless your a learner with stabilisers)) But nonetheless its still a bike and subject to the same laws any other bike would be to be ridden on Public roads. That is as long as you don't pop any Wheelies or add a motorised wheel that produces more motorised speed than the EUs...15.5mph limit...

Not the answer you're looking for? Browse other questions tagged brakes legal lighting penny-farthing or ask your own question.

7
Proper Posture for Preventing Painful Posteriors on Penny-farthings?
5
Are Velomobiles street legal in the UK?
19
Why the penny-farthing?
2
Must a Bicyclist Riding on a Sidewalk Stop at a Stop Sign?
0
Is it legal to ride on sidewalks in Georgia?
9
How do mini penny-farthings ride compared to regular size pfs?
7
Are there penny-farthings with an internally geared hub?
2
What are the hazards and risks if I keep using a worn rear tyre?