Are unicycles more, or less, efficient than walking? (or are they just for fun, entertainment and exercise?)

There are various sizes and shapes of (pedalled as opposed to electric) unicycles.

It is possible to buy them with large wheels, supposedly for road use. 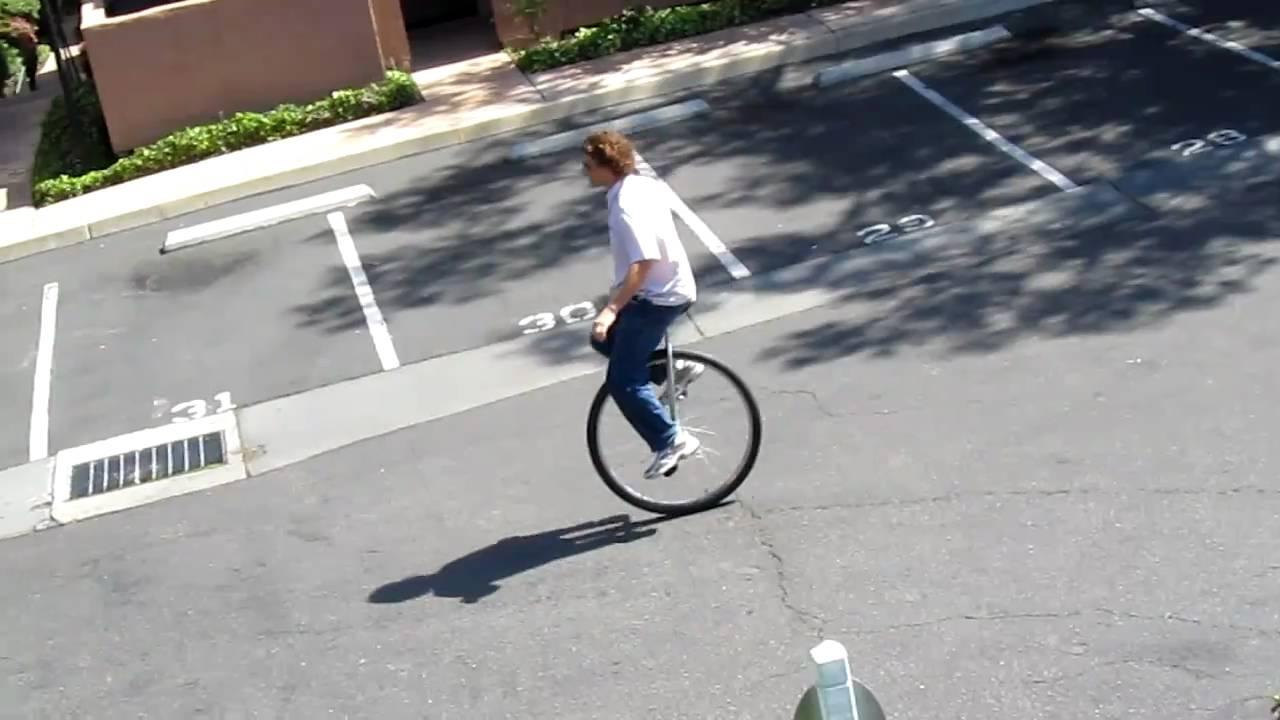 I imagine that the lack of a freewheel mechanism, having to brake by back pressure and the effort of balancing mean that they are inefficient and require constant effort. Also there are no gears for going up or down hills.

Does travelling by unicycle have any advantages over walking as a mode of transport? Would level city roads be most suitable? Does it ever become easy and/or completely subconscious with practice?

With a competent rider, a unicycle is far more efficient than walking. As evidence of that consider for example:

These feats are all well beyond anything anyone could complete on foot.

It appears that in terms of distance-covered-in-time, or time-to-cover-distance, unicycling is very approximately twice as efficient as walking and half as efficient as bicycling.

Unicycling has so many obvious disadvantages over walking. Unicycles require lots of practice and they cannot easily traverse uneven ground like stairs or sand. Additionally, the "having to brake by back pressure" effect means that unicycling down a slope is approximately just as tiring as unicycling up the same slope. However, a unicyclist on flat solid ground is generally faster and more energy efficient than walking. The large wheel primarily aims to increase the max-speed of the unicycle.

However unicycles (and unicyclists) come in a variety of different shapes and sizes so there are many exceptions. For example giraffe unicycles may be less efficient because of the resistance in the chain and the energy spent mounting and unmounting it. Some unicycles have gearing systems (like the "Schlumpf") which are known to increase the max-speed of a unicycle, can be less energy efficient due to all the moving parts. Some particularly talented unicyclists are able to lift both their feet from the pedals as they ride down a hill - letting the pedals spin freely underneath them as they freewheel down the slope. This technique is more efficient and faster than normal unicycling because the speed is no longer limited by the cadence of the unicyclist.

Another advantage that unicycling has a form of transportation is safety. Pedestrians and motor vehicles naturally give me significantly more space when I am riding my unicycle. Presumably this is because unicyclists look very unstable and unpredictable to anyone unfamiliar with the way unicycles move.

For a skilled rider in reasonable terrain, the efficiency of a unicyle is not that different from a bike, and drastically higher than walking.

The bicycle is popularly regarded as the most efficient means of human powered transit. Basically you sit there, use a smooth rotational movement, and mechanical advantage sends you sailing easily along, wasting no effort in vertical movement or pavement impact. As speeds increase, the largest energy expenditure on a bike rapidly becomes fighting air resistance, which is why drafting is a thing.

For a skilled rider, a large wheel unicycle is not very different from riding a bike. Yes, there is a foward and backward component to balance, but just as in the skill of walking, this is not done by loosing control and then recovering it, but rather by adaptively putting just a tiny bit more or less effort into the pedals - effort that all contributes to useful progress over the ground anyway. In fact, if a unicyclist does actually start to fall over (essentially always falling forward) the "save" is a mad burst of pedaling - effort expended at an inefficient rate, but still ultimately going towards covering ground.

Typical cruising speed when riding the largest current production pneumatic tire (36 inch) direct drive is around 16-20 km/hr. If one were to equip a cruiser bike with the same low gearing and short cranks, the efficiency would be effectively the same. Put the ordinary sprockets back on the bike, and now a bicyclist riding alongside the unicyclist at the same pace can pedal more slowly and gain a small advantage there, but the actual power output to roll the same speed will be about the same. The thing is, a bicyclist of comparable enthusiasm to someone able to ride a unicycle smoothly is probably not going to be content to roll along at 20 km/hr, but rather will go a bit faster. However, this does not make them more efficient - actually the opposite. Because energy expended fighting air resistance increases rapidly with speed and overwhelmingly dominates at higher cycling speeds, the reality is that someone rolling along at an easy pace on a unicycle is actually moving more efficiently than the person who passes them going twice as fast on a road bike. A bicyclist going just a little bit faster could be more efficient that the best unicyclist, but the bicyclist would have to chose to actually ride at their most efficient speed, rather than be guided by more typical desires to get somewhere or get in a workout before they get tired of the saddle.

To look at some specific situations:

One should be careful of mistaking things like endurance or range for efficiency, but there are of course some relationships. A bicyclist may often be able to readily access their entire ability to output energy over a day. In contrast, someone hiking may experience fatigue, but may find their range more limited by things like impact stress. Riding a unicycle tends to fall somewhere in between. Riding smoothly presents almost no impact stress, though jumping on and off frequently definitely can. Saddles tend to be larger than those on a bike, and out of saddle breaks more limited, so saddle-related fatigue can be more of an issue, particularly for a developing rider (a chamois and anti-friction cream are definitely recommended, along with a handlebar with permits a more bike-like limitation of saddle contact to sit bone pressure and not thigh control).

Ultimately an only moderately-active individual who invests effort in learning to ride smoothly, remount without support, and climb moderate hills can probably do dawn-to-dusk "Century" (100 mile or 160 km) rides, while likely challenged to hike even a third that far. Experience doing these confirms that rolling along spinning high cadence into negligible resistance is a moderately low effort way to spend an "active" day. Someone on a bike might get it done in half the time, but at the actual expenditure of more energy.

In my experience a unicycle is not as efficient as walking.
On a bicycle you keep balance by leaning a bit to the left/right or by making small steering adjustments left/right to keep from tipping over. These are typically tiny adjustments don't slow you down much.

To keep balance on a unicycle you make the same left/right adjustments but on top of that you have keep from falling forward or backward. Keeping balance in that new axis means constantly accelerating/decelerating. This is the main difference. If you have excellent balance you do this mostly through leaning your body forward/backward but there will always be some extra effort put into acceleration/deceleration that has nothing to do with maintaining speed but everything to do with maintaining balance.
I don't think I could ever relax my legs for more than 2 seconds before having to correct my balance.

Even at "rest" you still have to constantly rock the unicycle back and forth a few inches to keep from falling over. Your legs are always working when riding a unicycle and there is no way to go idle or rest until you dismount.
I learned to ride on a small unicycle as a child and maybe things would be different if I had a better sized unicycle or a superior sense of balance. But in my experience my legs would always get fatigued after 20 or so minutes of riding a unicycle.
Maintaining a slow or fast speed had no impact. It was the constant acceleration and deceleration needed to keep myself upright that took the most out of me.

Going down even the slightest hill meant I had to work harder because I was constantly trying to slow myself down by backpedaling at just the right amount. The answer might be different from someone with better balance but I don't know anyone else who has a unicycle much less rides one.

Not the answer you're looking for? Browse other questions tagged unicycle or ask your own question.