I've just restored my 98' Kona Caldera, but I left the fork like it was since it seemed to work smoothly enough. Considering I would like to not mess with a fork (like everybody), even if I've done some time in the past with some other spring fork with success, after some rides I feel some play of the tubes inside, especially under front braking. It's not super severe, I tried to make a video but it's invisible by eye, it's probably 1/4 mm of play and not so easy to replicate. It seems a minor issue but this doesn't give me too much confidence in some trails and in some high speed descend, so what should I really do? Is this supposed to work like this since it's an old technology, or it's not working correctly? When it compress it's not super smooth, but I would not even call it grindy... So I don't really know what to do. Do you know if there is any oil inside this model, or some guides to refeer? 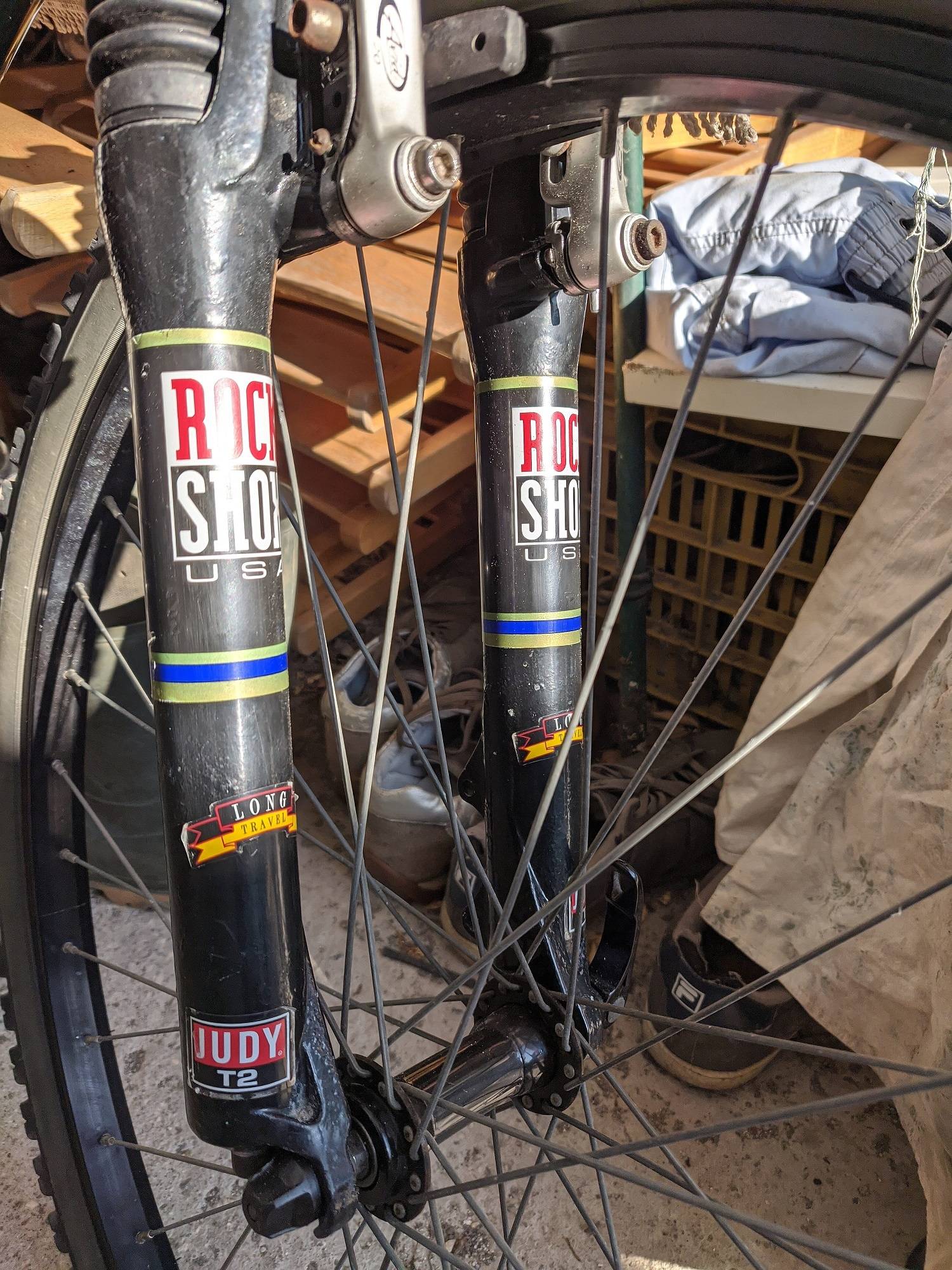 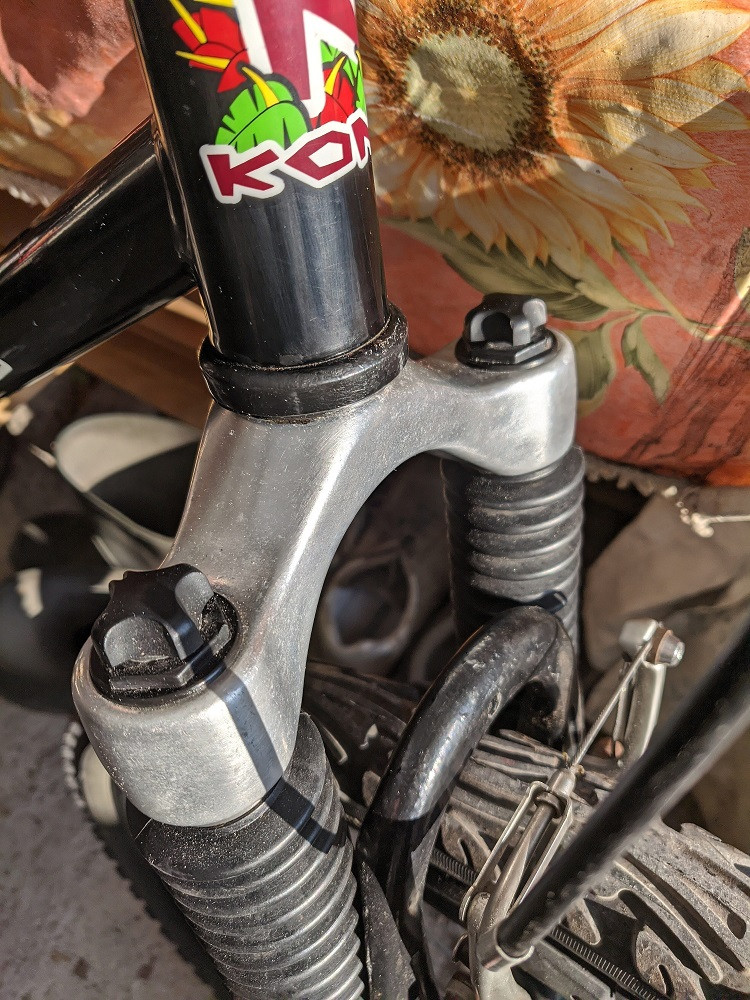 After your suggestions I decided to take a look... Honestly they were quite easy to disassemble, I think this is an example of a good build fork (no talking about the performance here), it's light (1.5kg) and easy to maintain, inside it was pristine, no sign of dirt anywhere, which for a 22 year fork is just amazing (I don't know how it has been used, I bought the bike some months ago from a guy who doesn't really know something about). I discovered the origin of play, is here supposed to be a foam seal? 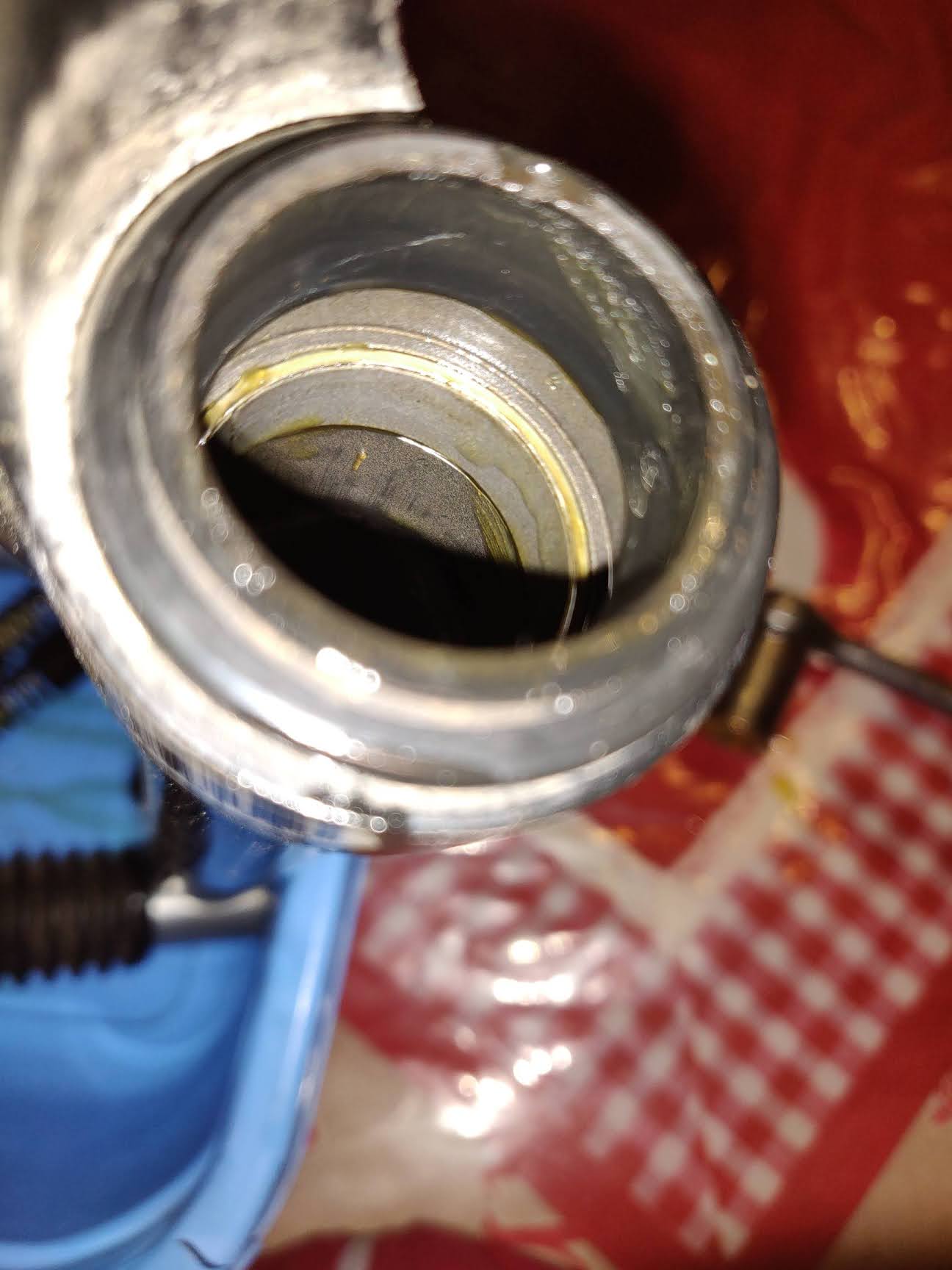 Since I'm cheap, I decided to make ones from a foam package which seems surprisingly similar to the kind of foam you find in the forks. 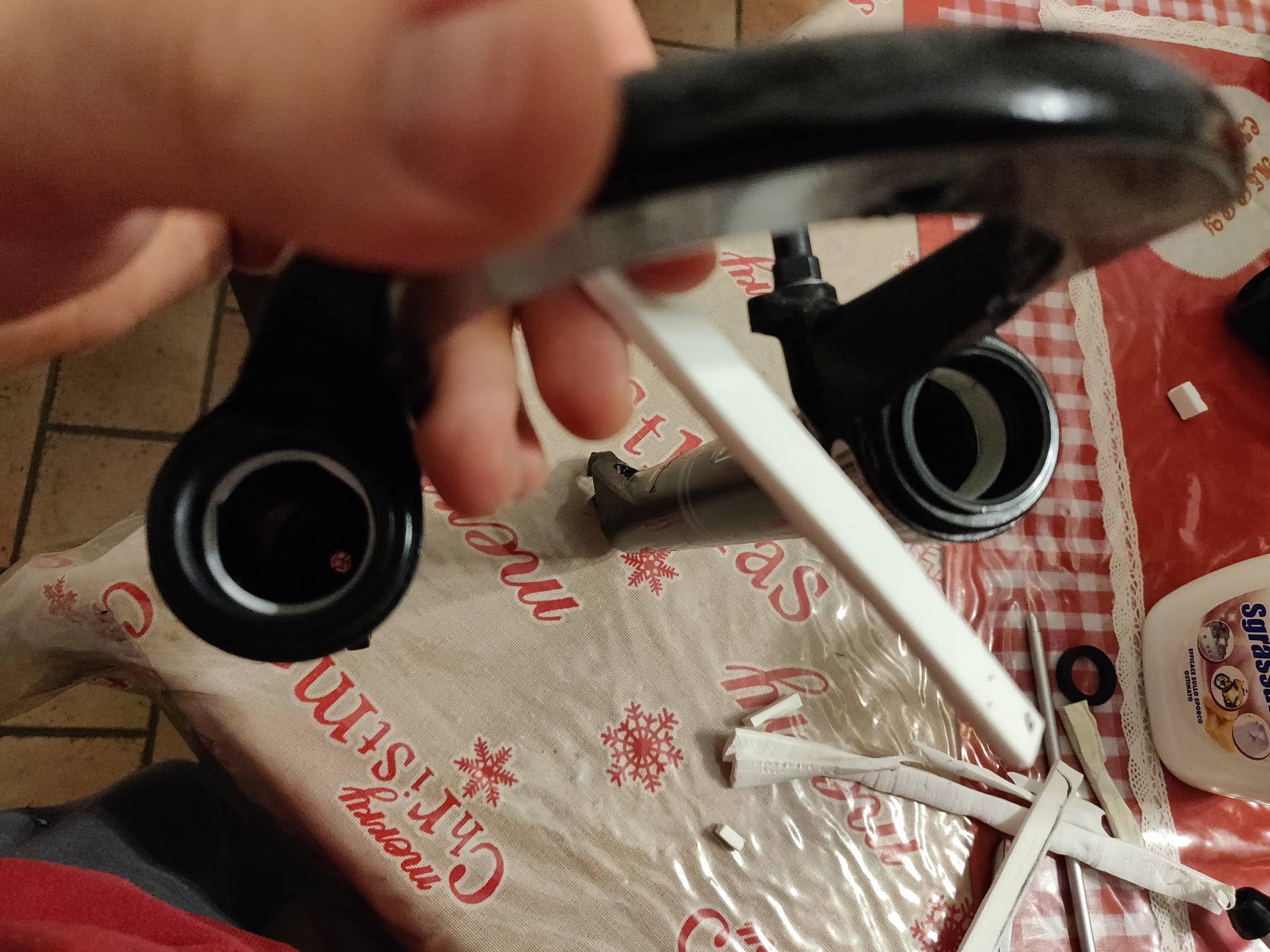 This seems to have solved the play problem, just for info mine mesures 1cm height and 3.5mm width (with a +/- 0.5mm margin, not really precise). I cut the length while I was putting in place, so I don't really know. The nice thing is that this foam made the fork less pogo-stick feel, and more proper actually by adding a little bit of rebound. Never tried an High-end fork, so can't really compare, but it works better. At the time of the disassembly I was expecting no oil, but surprisingly there was very little oil, so little I tough it was put here by mistake because on the web it was impossible to find any info about that. For now I just put some teflon grease and it seems to work better than before, do you think is that safe to use? Would oil make it work better? Which oil I should use? I should also replace at least one elastomer, take a look here... 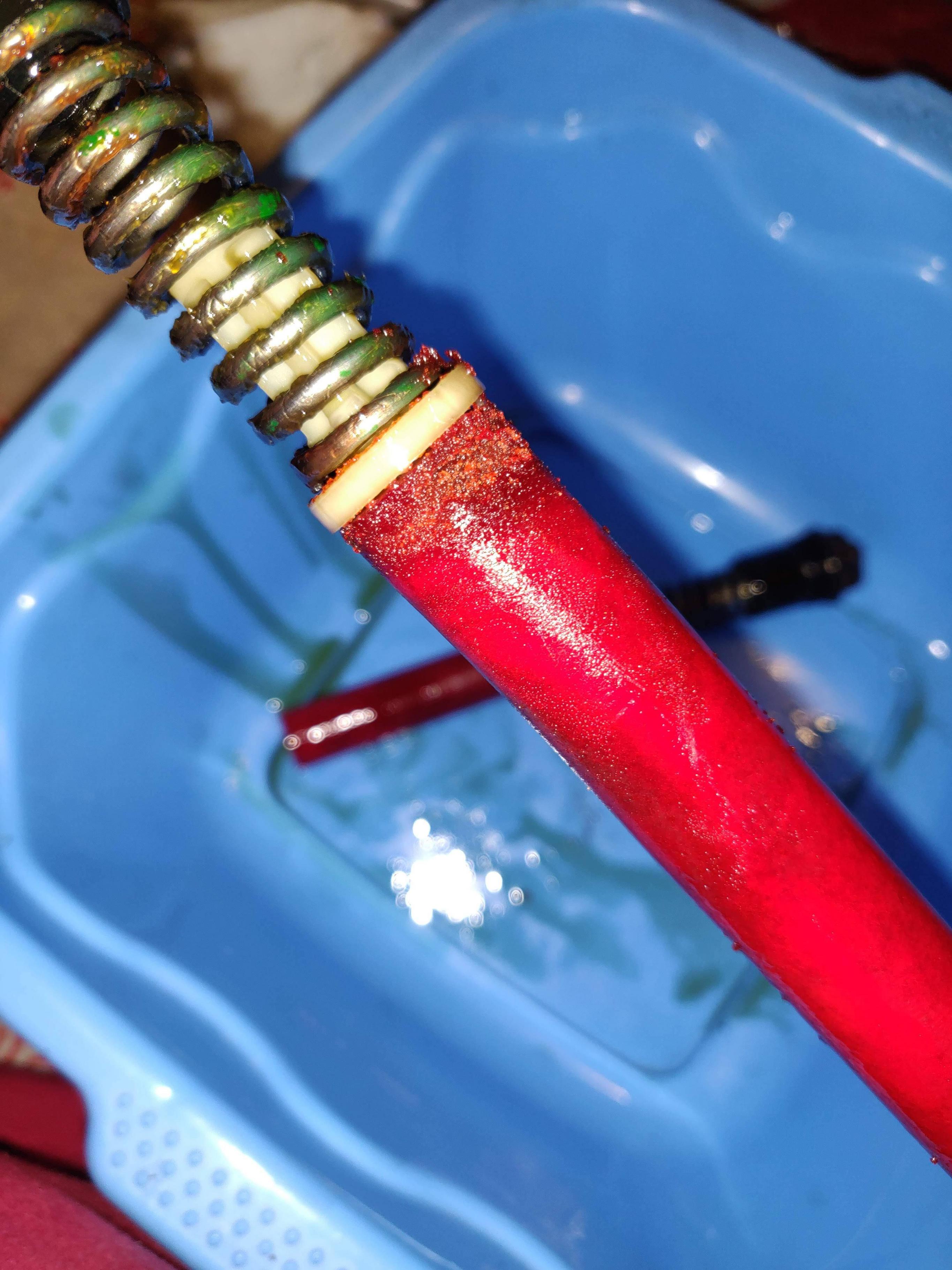 Where to buy a proper replacement without braking the bank? I don 't really want to use in hard trails, but I can find a cheap replacement I would be happier.

If by “play” you mean for/aft play between the stanchion/lower interface this will be caused by bushing wear. Those early Judy shocks have very small bushings compared to what is used today. Depending on how clean you kept the shock (the early seals were horrendous as well) the bushings would typically wear out quite fast. Each side of the lower will have two bushings less than an inch wide each. I remember the need to replace the bushings each year if you rode consistently off-road.

Given the age of the shock it may be hard to find replacements. I would be surprised if RockShox has any stock left, but a local bike shop that has been around may.

That era fork will probably be spring/elastomer or spring/sealed cartridge. I believe the T2 was essentially a glorified Indy. The elastomer will have hardened and no longer be working optimally, so the shocks won't be performing like new (and when new, were not great by todays standards). The sealed cartridges were not serviceable. The play will be wear.

What to do - nothing is probably the best option. A new fork will be expensive and the best you will do is a a very cheap fork as the technology has changed so much a modern fork will not fit the bike. Servicing ability if limited to lube and with parts being practically unavailable, any problems could make the fork unserviceable.

A fork service is pretty straight forward - strip the fork, lube the internals with a fork grease, and put it back together. I cannot remember exactly how - plenty of stuff on the internet if you look.

You may be able to find replacement elastomers, if these were reasonably priced might might be worth it.

Not the answer you're looking for? Browse other questions tagged maintenance fork restoration or ask your own question.

1
What's the beefiest front shock (26"), avail in quick release, with travel of 100-125mm (no more)?
11
What maintenance does a front suspension fork need?
2
Front fork pulling to center / "indexed steering"
3
Should I restore my old mt-bike for winter commuting (and for wife to ride with me) or throw it away?
2
What fork size is 32mm (inside diameter on the frame) considered?
1
Air in oil damper of suspension fork after pulling hard while disassembling
4
Removing an internal headset before pulling the fork?
0
Any drawbacks in using long-travel forks with huge sag instead of regular XC fork?
4
New suspension fork - how much should I care for locking on the handlebar?