I'd like to replace the pedals on my "Pro Fitness" recumbent exercise bike, and use clipless pedals instead (MTB or SPD). I tried to replace them, but found the diameter on the crank hole is too small for the pedals I had lying around (SPD and flat). Could I replace the cranks? I only see cranksets for normal bikes online. 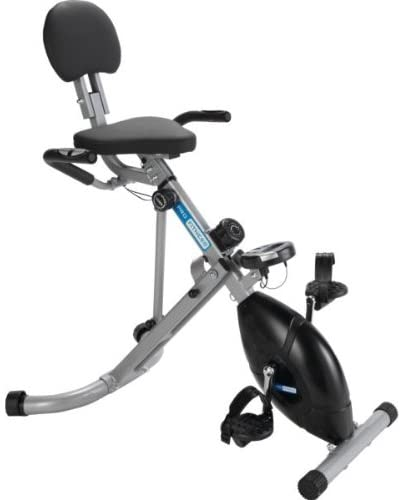 9/16"x20tpi is the predominant modern size, and 1/2" also exists. On bicycles, 1/2"x20tpi is virtually always only found on one-piece cranks, but exercise bikes can do whatever. They are almost certainly 1/2".

1/2" cranks do not typically have enough material to be tapped to 9/16", but they're also not typically a 3-piece design as pictured. If yours did, this could be a way to do it. To cut new threads in a crank, extreme care has to be taken to have them stay on-axis, because any small deviation is easily felt by the rider. Doing that well, for me at least, means taking the cranks off and putting them in a vise so the angle the tap is going in can be monitored easily from all sides. If you go to a shop for this and they need to take apart that cover and whatever is under it to get the cranks off (unclear if that's the case), I would expect to pay a bit.

You can get 1/2" to 9/16" adapters. They are incredibly hokey, garbagey products, because they jack your Q out by something like an inch per side. But this is the cheap, simple way of getting clipless on it. Grease the threads and tighten them very well, because another reason why they're complete trash is they make the interface work with more leverage and flex than it likes.

The third route is figuring out a model from one of the SPD clone manufacturers that can have a 1/2" spindle from the same company hacked into it. I have not done this but I do know that those companies are not in the habit of having multiple spindle profiles when they don't need to, so I bet you could make it work if you figured out the right specimens. In other words, you're looking for a looseball VP or Wellgo or whatever set where everything from the thread shoulder onward is the same between it and some obtainable 1/2" spindles.

If the BB interface is a standard one, which is not a given, you may be able to replace the cranks altogether. You would need a captain crank on the right side, or one made from a left crank via helical insert. This is probably the most contrived and expensive way of doing it.

Not the answer you're looking for? Browse other questions tagged crankset pedals stationary-bike or ask your own question.

4
Will this power2max power meter be compatible with Cannondale Synapse?
3
Foot shifting while pedalling
2
Clipless pedals for my 9 year old
3
will any shimano pedal fit any shimano crank?
5
Advice for buying a new crankset for my bike
1
SPD pedal float becomes restricted
2
Single chainring conversion issues
2
Help me build a 2x11 crankset with a 40t/42t big ring and bashguard
1
Replacing cranks on SRAM Force AXS
6
Wondering if this crankset from 1990 is still safe to use