Did my 2015 rim have wear indicators on the brake surface?

Should I expect an alloy rim from around 2015 to have had wear indicators, because it doesn't now? I assume a decent manufacturer, and a rim that's neither the cheapest nor high-end and super-light.

I doubt I'll find an answer for mine specifically (Mavic A310 by the look of things), so I mean this is a general sense. In my case this is on the back, and it's done about 12 000 km, sometimes fairly laden as that's the bike with the child seat. I tend to use the back brake lightly, and despite mudguards it does get dirty. They appear to have been discontinued, and I can't find a decent resolution photograph to check myself.

I've just pulled a chunk of aluminium out of one of the brake pads, so inspected the rim carefully to make sure that wasn't the source. That's when my suspicions were raised.

While I don't really expect a definitive answer, it would be good to have a decent idea of when to build the new wheel.

As @abdnChap correctly stated, not all rims have wear indicators, which are usually one or more dimples on the rim or a groove machined around the whole rim. Without a wear indicator, gauging the amount of permissible wear is subjective (unless the rim is cracked, but you don't want to let things get to that point!). So, how are consumers to gauge wear using a ruler?

The image below, from November Bicycles, shows a alloy rim that they describe as being about worn to about half its life. As a side note, they mention that if that were a carbon rim, it would be fairly worn, and they also discuss that once a carbon rim's brake track has lost its initial woven appearance, it's time for a new rim. 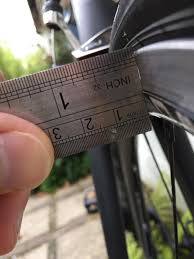 The pictures below, from Bike Test Reviews and Bike Touring News respectively, show rims that are worn out. 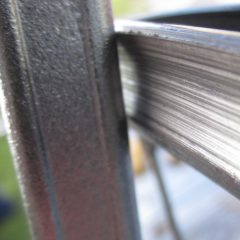 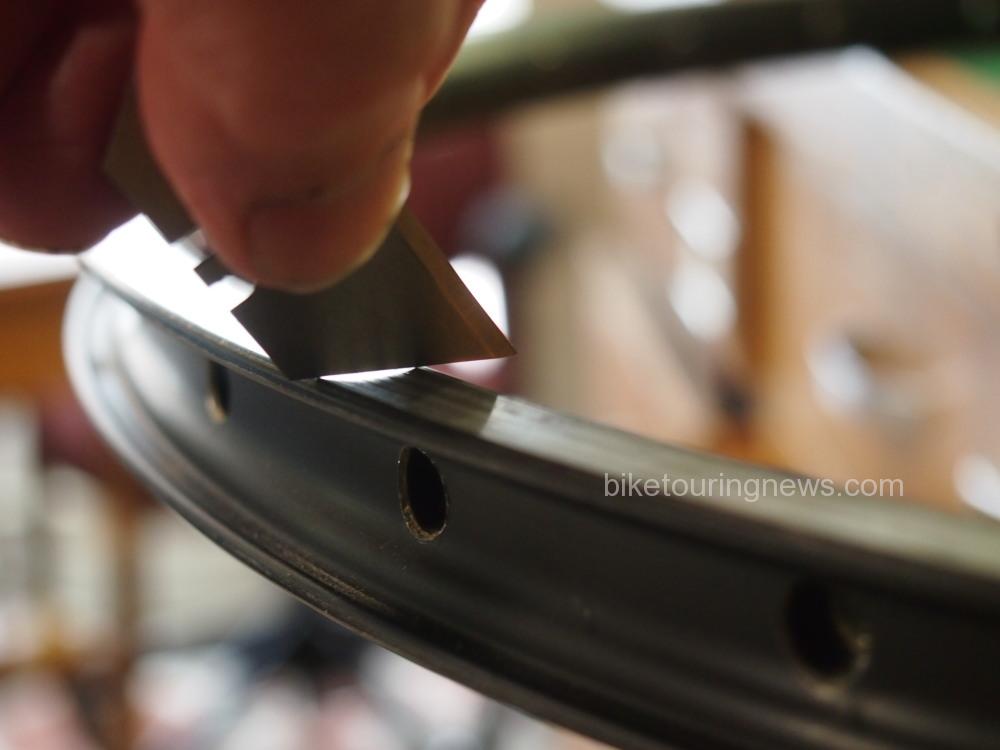 How long should a rim last? It depends on the rider and the conditions. Dry weather is obviously conducive to long life. As November Bicycles discussed on their blog, some rim alloys are longer lasting, and some are less durable. Because the A310 was not a high-end rim, I wouldn't expect a top-end alloy, but that doesn't mean poor durability.

I found a technical document from Mavic. It doesn't say which rims have which type of indicator, but apparently they have used two different types. The traditional ones that I think everyone is thinking of (myself included) are dimples on the rim that wear away as you wear the rim out. When those are gone, you need a new rim.

Some rims had internal wear indicators that appear when the rim is worn out, rather than disappear. The document says that "the inside of the braking surface of the rim is machined on both of the wings of the rim." This post by Cycling UK clarifies that (to me) vague statement; the writer said the notches were on the tire retaining flange, which I assume is the bead hook. So, the indicators should appear on the circumference of the rim.

However, Mavic's wording seems to imply that some rims had traditional (external, in their nomenclature) wear indicators, some had internal, and some may not have had any wear indicators. I've not yet found a list of which rims had which.

Not all rims have wear indicatiors.

The best way to check whether your rim needs to be replaced due to exessive brake wear is to take it to a local bike shop for a professional to look at, the structural integrity of a rim is crucial for a safe ride. You can also check the manufacturer recommendations for how much material loss the rim can take.

An easy way to check for wear put a ruler on the sidewall and see if you can see daylight. If there is a small gap you're fine. If there is a big gap, then you will also notice the top (where the hook is) is coming out thus the sidewalls not been parallel anymore. Also, given that an accurate measurement of the thickness is not always doable (how many people do have a micrometer at home??), to check the integrity of the rim by its shape should be as reliable.

If you're unsure about what constitues as enough wear, just replace the rim. It won't have many more miles left and you're rather waste a few miles from a rim's lifespan than risk a colapsing rim during a ride. This is specially important to bikes with high PSI tyres. As the pressure is literally pushing the rim walls apart.

Not the answer you're looking for? Browse other questions tagged rims rim-brake or ask your own question.

23
How long is the life cycle of a bicycle?

7
Fixing damage to brake rim surface
10
Uneven wear of brake pads
13
What's the purpose of the channel in the brake track of this rim?
0
Zipp Showstopper Brake Surface
0
Does the nukeproof horizon mtb rim have a brake track?
1
Chemically roughening rim braking surface to improve performance
3
Rim brakes and rim wear outside the brake track
5
Brake mounting points very close to the rim
9
How fast do carbon and aluminium rim brake tracks wear?