Why signal stop with your left hand in the US?

If I'm stopping or slowing down, I'm using my front brake. The brake operated by my left hand.

The majority of braking is best done with your left hand, operating the front brake. See here: https://www.sheldonbrown.com/brakturn.html "Skilled cyclists use the front brake alone probably 95% of the time"

So, why the traffic laws & general expectation that you signal stop with your left hand?

[It seems like it would be better to signal "Stop" with your left hand while operating the front brake with your right hand.]

A historic reason why signaling is with the left hand in the US is because motor vehicle drivers sit on the left side of the vehicle in the US and must signal with the left hand out their left window if their signal lights are broken (or when driving before turn signals existed). If they signaled with their right hand, it would be inside the car and wouldn't be visible to other drivers. This practice likely carried over to cyclists.

Here's an article that describes the historic reasons why some bicycles have the front brake on the left hand, while others use the right:

In the U.S., the law requires that all bikes are sold with the left hand controlling the front brake, and the right hand the rear brake. It’s the same in France. In Italy and Great Britain, it’s the other way around.

Many myths surround the reasons for these differences, but history is the most likely explanation: Early bikes had only a rear brake. In France, this usually was a rim brake. The early brakes were not very powerful, so you needed lots of hand power to stop the bike. Most people are right-handed, and it made sense to control the single brake with the right hand. In Italy and Britain, the single brake was a coaster brake, and there was no brake lever at all. When front brakes were added to bikes sometime in the 20th century, this required adding a brake lever to the handlebars. In France, the right side was taken, so they mounted the extra lever on the left (above). In “coaster-brake countries,” the handlebars were still empty, so the brake lever for the front brake went on the right side (below). When racers started using rim brakes on both wheels, the extra brake lever (for the rear wheel) went on the left side.

The U.S. copied French practice – probably because Schwinn was the only company importing performance bikes with hand brakes, and Schwinn was influenced by French bicycles.

(emphasis added by me)

The fact that early bikes in the US didn't have a left hand brake is further justification why the left hand was used for signaling.

The article continues to list some pros and cons about having the front break on the left or the right and is a good read if you have the time.

In the US, you ride in the right lane as far right as you can unless you are "taking the lane," which is legal in some states under some conditions (e.g. no bike lane, debris on shoulder, not safe for car and bike to split a line - which in my opinion is never safe).

By signaling with your left hand, your hand is going to be more in the line of sight of drivers vs. your right hand which will be harder to see since you already are to the right of the road and even possibly in the shoulder area.

At the end of the day, you will probably never get a ticket for signaling with the wrong hand or not signaling at all, just do what you feel is safest for the situation.

In my opinion, a visible flashing rear light probably is going to catch the attention of a driver more than any hand signal unless flipping them the bird... just saying. I would not consider riding even on the shoulder of any road without effective visibility lighting (e.g. stuff from Bontrager has pretty good flash patterns to catch people's attention)

Regarding benefits of front vs. rear brake on bikes, yes it is true that the front brake is more effective for any 2 wheel vehicle like a bike or motorcycle. Furthermore, using both in unison is the most effective overall. With that said, most people on a bike are traveling at slower speeds than a motorcycle and so you can certainly stop a bike safely with just the rear brake. In fact, I usually drop most of my speed using both brakes and come to a final stop with just the rear because the rear brake at slow speed does not cause as much instability as the front (note the same can be said for a motorcycle in a parking lot where a lot of people use the rear brake only to control speed). Some of that is personal preference too.

Here is an example of a ride on a US road where I am taking the right most lane and if I was to signal my left hand would be most visible to a driver behind me: 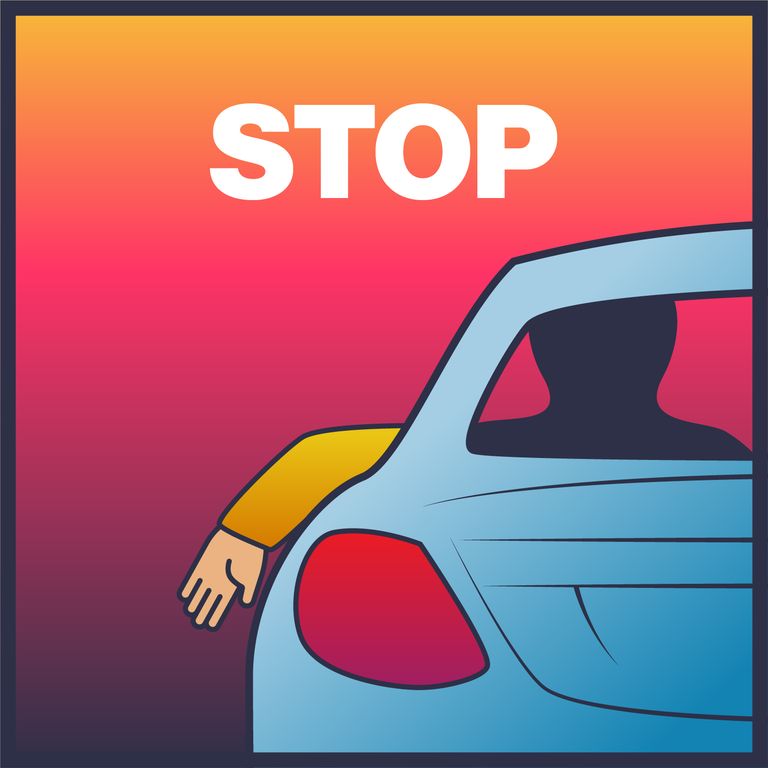 Signalling with the right hand is impossible for drivers of motor vehicles in the US because the driver is located on the left side of the vehicle.

Although the front brake is indeed more effective, you generally don't need full braking power while stopping or slowing in traffic. It's also rare in my experience to see lone cyclists signaling for stops. In group riding though, it's more common since you don't want to get rear-ended by the rider drafting you.

Personally, I downshift and brake after I signal, usually on right turns (Canada). I think it's safer to give drivers a bit of advance warning. You could probably do the same for braking: signal, then use both hands to brake afterwards.

The brake operated by my left hand.

Ah yes, pet peeve of mine. That's a very poorly-considered default configuration that you can easily fix.

I switch cables around so that I can brake the front wheel with my right hand while signaling.

This is sometimes useful when going down a fairly steep hill and making a turn.

Not only that, but also because I'm right handed, and it's it's obvious to me that the dominant hand should operate that brake which provides the most stopping power.

Edit: Yes! I just read that good old Sheldon Brown did exactly the same thing, and I'm aware that on motorcycles, right hand controls the front brake also. If I ever get into motorcycles, I wouldn't want to be confused: that could be deadly.

For a cyclist riding on the right side of the road, it makes sense to use the traffic-side arm for signaling, because that is most visible to motorists.

As far as brake power is concerned, it's not really relevant whether the remaining hand operates the rear or front brake – with just one hand, you're limited by the fact that you need to brace your upper body one-handed against the handlebar without turning it.

For a right-handed person, having the right hand on the handlebar should even allow for slightly higher braking forces.

But in general, I would always signal first and then brake, and if that's not possible, just omit the signal.

Here in Austria (and everywhere else in Europe) I’ve never heard of any requirement/recommendation to signal braking with your left hand.

When I want to stop on a straight road I signal with my right hand because I’m going to the right onto the shoulder of the road, just like you’d do in a car.

Some rear lights have a brake light function. They increase brightness or blink when they detect deceleration (using an accelerometer).

71
What advanced cycling skills are useful for a commuter or city rider?
14
What hand signals work best for cyclists in the US?

32
Which states or countries have stop-sign-as-yield laws for bicyclists (Idaho stop law)?
24
Passing cars on the right, and later merging into their lane
6
If a lane is going to expand should the left lane be taken prior to the expansion?
8
What is the best way to stop and restart at a stoplight?
23
Is my stopping dangerous when Idaho Stop is de facto but not legal?
3
I read that "training is needed" before your voice can replace a horn. Why might this be?
6
How to handle motorists' dangerous behaviour with an impassable group?
3
Idaho Stop: Should I stop at a stop sign when an oncoming vehicle has a stop sign too?
19
Should cyclists on a bike path separated from the road overtake each other on the right or on the left?