I wish to know more about converting a 2x to a 1x, especially the Force AXS eTap group set.

I currently have a double chainring, but want to ditch the Front Derailleur and go to a single chainring. I have read about narrow-wide chainrings being necessary for single drivetrains, because it keeps the chain more secure on the ring.

However, I have found this single chainring ( Force AXS specific ) WITHOUT the narrow wide.
I have also found this Force AXS one, but WITH narrow-wide one.. (incl crankset)

So there must be a difference or advantage or disadvantage for the two options. What is my best pick here? Don’t worry about the range.. I never rode my small ring in the last 2000 miles.

While I don't speak Dutch, the link you provided seems to be for a 46t outer ring from a 2x system. If you look closely enough at the photo you linked, you can also see "46/33T" etched on the ring: that's the smallest chainring option that standard Force AXS offers (Force AXS wide goes down to 43/30). You can see that more clearly in the photo below taken from this retailer. In addition, you can see the shift pins (two pairs of two silver pins, each pair separated by 180 degrees), and a black chain drop pin. All that gives the first ring away as a 2x chainring. 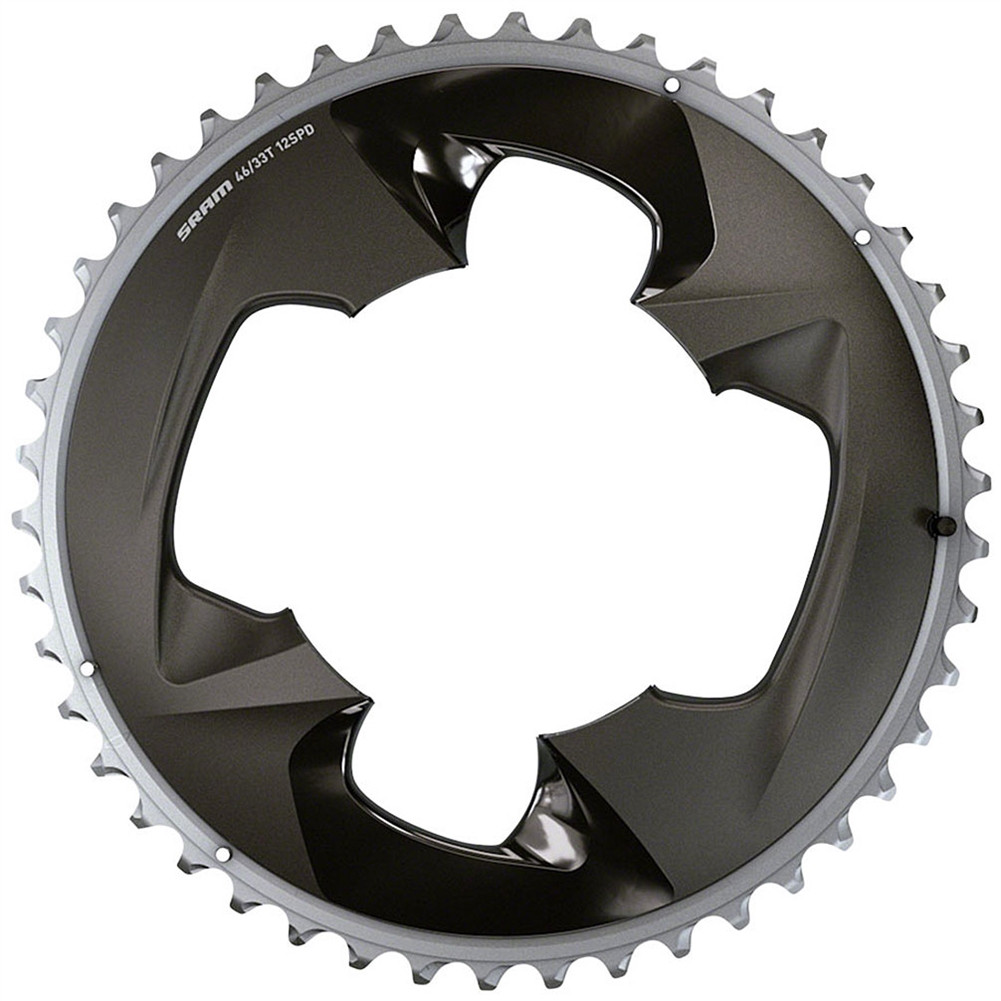 The narrow-wide teeth of 1x chainrings do really help keep the chain on. If you use the 2x chainring, you lose that protection. Back when I used to race cyclocross in the early or mid 2000s, I recall that many people would use 1x systems there without the benefit of narrow-wide chainrings - but we would either run chainguards on each side of a single ring, or else run an outer chainguard plus some sort of chain catcher on the inside. Cyclocross-style chainguards were just plates you mounted in place of the chainrings with some spacers. An ad hoc solution was to take a worn chainring and dremel the teeth off.

It does seem like on mountain bikes, chain guards might be accepted as either an alternative or a supplement to narrow-wide chainrings. It's an alternative if you're converting an old bike. Some MTB riders may add a chainguard to an existing 1x setup for extra security; this practice may originate on the gravity side of the discipline, and it may be tricking down to some enduro and XC cyclists. This style of chain guard is something like a front derailleur minus any shifting capability. You'd clamp it on like a regular front derailleur.

If you are determined, for whatever reason, to use the 46t 2x chainring, I would see a chain guard as mandatory. While I don't have personal experience, I'd imagine that even on a road bike, I would not trust a clutch RD alone to retain the chain. The clutch merely stops the RD cage from moving forward as the bike travels over rough terrain. That reduces the amount of chain bounce you get over rough terrain.

I have read about narrow-wide chainrings being necessary for single drivetrains, because it keeps the chain more secure on the ring.

A narrow/wide chainring is not the only necessary component. You also need a rear derailleur with a clutch to be able to avoid chain dropping from the chainring.

Not only that, but 1x chainrings need a crank with optimal chainline for the only chainring. A 1x setup is intended to be built such that you can use any sprocket in the rear with reasonable chainline. A 2x setup is built such that the large ring is used with N-1 smallest sprockets and never with the largest sprocket, and the small ring is used with N-1 largest sprocket and never with the smallest sprocket. If you install a 1x narrow/wide chainring on a 2x crank, it won't have an optimal chainline.

My opinion is that this probably won't make much sense. Selling used parts is tricky as if you won't find anyone nearby to buy these, you have to pay postage, and the price for worn items you get is quite low anyway.

Even if starting from the scratch, i.e. you are building a bike and selecting components, a 1x setup won't save any measurable amount of money. You need a cassette with larger range (more expensive), a rear derailleur with a clutch (more expensive) and one narrow/wide chainring (which costs far more than two ordinary chainrings because narrow/wide chainrings are built by CNC machining and machining the narrow/wide features requires more tooling time than simply creating an ordinary chainring). You save front derailleur cost which is a cheap item anyway, and you won't need the front shifter. About the only type of shifter that is expensive is an STI unit, and if using STI lever for the rear shifter, you probably want another identically sized lever, i.e. you will have an STI lever for the front too. In comparison to STI shifters, mountain bike shifters are ridiculously cheap unlike for example narrow/wide chainrings that cost a lot of money.

Not the answer you're looking for? Browse other questions tagged drivetrain sram conversion or ask your own question.