How can I stop a saddle from creaking in a spinning bike?

My housemate bought a spinning bike since all fitness places are closed due to corona. It has an ordinary (non-road/mtb) saddle which creaks when pressure is applied on its edges (nose, back, left/right). The sound appears to originate from the saddle rails itself. 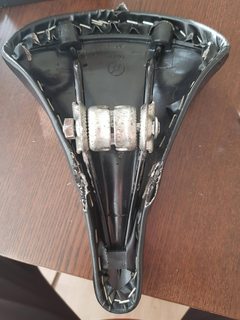 Try a light drop of a wet lube perhaps one that you put on a bike chain at the points of contact on the saddle rails. That helped on some SPD pedals and my cleat that made a squeak every now and again as I rode.

Possibility 1: Take the clamping system apart and clean the parts. Then reassemble with the metal to metal contact surfaces properly greased.

Possibility 2: Replace the saddle with one of better quality as the most probable cause for creaking could be the saddle itself, especially where the rails are lodged in the shell. If you want to go a step further and if the bike allows for this, replace the seatpost as well with one of better quality to get rid of the ancient one bolt clamping device.

The kind of clamping device that holds your saddle has come out of use and has been replaced by one-piece posts for mainly two reasons: weight, though this is not a problem on a spinning bike but also because the serrated surfaces work against each other through the dynamics of the moving cyclist, thus bringing in play into the system and requiring constant tightening, hence the squeak. They also permit incremental tilt adjustment only which is less precise than with two bolt seat-post heads.

After greasing every part of the saddle, rails and clamp the creaking would not stop.

After a closer inspection I found that the welded pin on which the clamp is fastened (outlined in purple) was moving ever so slightly, squeaking a bit when it moved in the square tubing. The weld itself is on the clamp-side of the square tube (not visible in the picture).

The lower part of the pin sits flush in a hole of the square tube. Adding some oil there (where the yellow arrow points) solved the problem immediately. 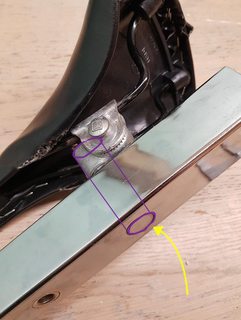 Take apart the clamp, clean it and put a light layer of grease on all the metal to metal parts. You can also add a little grease to the seat rails. Often the creaking is a result of dirt and grit stuck in between parts. be sure to tighten everything down well. if that doesn't work check that the seat itself is not creaking because of a crack in the plastic or the metal rails moving inside the seat where they meet the plastic part of the frame.

Lube will work. Just make sure you do it regularly.

Not the answer you're looking for? Browse other questions tagged saddle fitness creak or ask your own question.

43
Creaking from cranks/spindle. How to fix?
7
How do I stop my EBB (Eccentric Bottom Bracket) from creaking?
20
How can bum / testicle / inner thigh pain from a saddle be prevented?
1
Creaking sounds from the saddle tube?
6
Creaking when in the saddle
4
Bike creaking (possibly pedals?)
4
Saddle: how good is narrow?
3
How to prevent cycling shorts damage from brooks swallow saddle?
5
Are bike saddles always removable from the saddle post?
3
Can a conventional seat be reversed 180 degrees to be used as a noseless seat?