My chainstays have been eaten by rust, can something be done?

I hope you are all safe and sound and your Christmas time is at least decent in these pandemic times.

The other day I decided to give a good clean to my steel city bicycle and I removed the stand, which was quite tightly closed on the frame. Doing this I discovered two horrible holes in the ground-facing side of them: 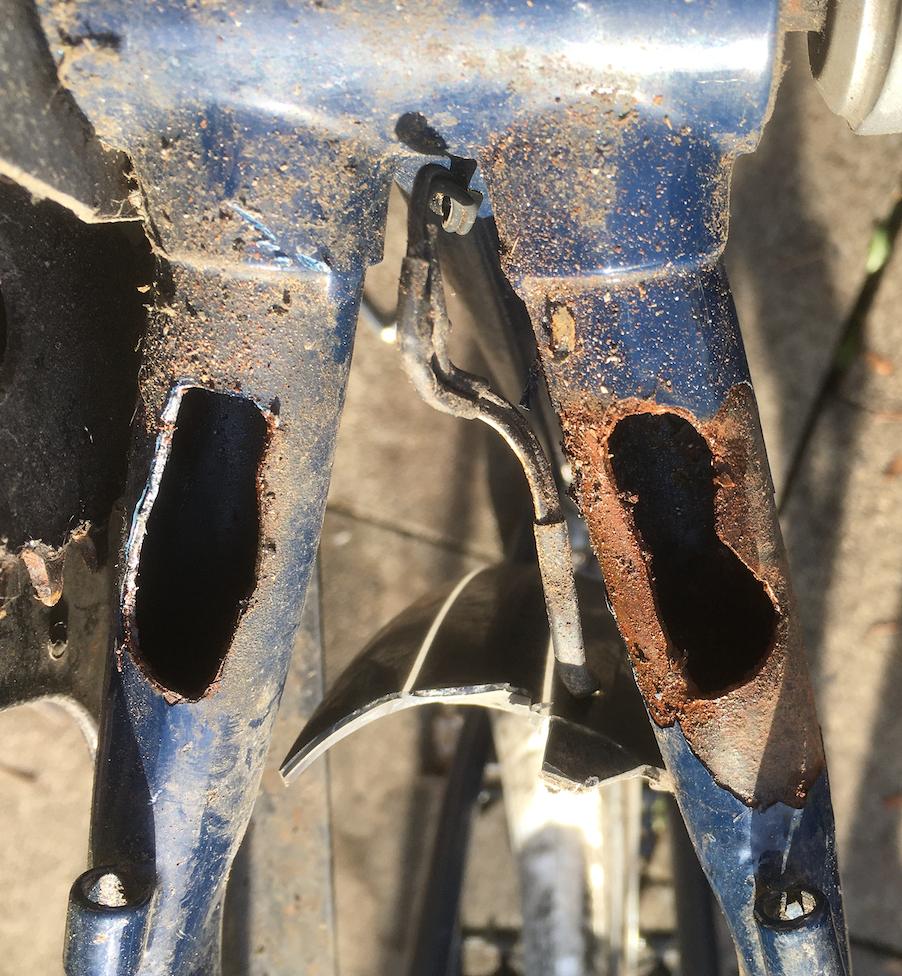 (I did not notice the ride quality as being very soft, but my other bike is an aluminium bike with a carbon fork, so probably I am biased towards stiffer bicycles)

The other side is in good condition, no rust inside or outside. Now, is anything possible to fix them? I would like to get 2/3 years more of life from this frame ... in its current form, without building it as a frankenbikes or other funny contraptions :D , if possible.

You can ride it as is if you are okay with the risk, repair it with carbon fibre composite either yourself or get it done by a professional, or you can have a professional repair it by welding.

Risk analysis of riding it as is:

In conclusion, if you are athletic, this shouldn't be a problem. Do you have experience with losing traction on the rear wheel because of a blown tire or locked up wheel? Have you flipped a trailer before, and dragged it upside down behind your bicycle for some meters before managing to stop? If you were fine in those situations, you should be fine if this frame fails.

I would be very cautious doing this risk analysis for other people like family, friends or customers (just be safe in doubt), but if you can do it for yourself, that's a legitimate choice.

As mentioned by other answers: Welding is a learned craft. Even if you practice on scrap metal first, you are more likely to destroy the frame or even seemingly repair it, but in actuality weaken it much more, than to successfully repair it. You would need to have it done professionally, and remove and then put back on all the parts around the welding spots.

That would be a 10 to 20 minute job for someone experienced with the process, and cost US$10 to US$20 in material. Working with carbon fibres is actually quite easy so you can do it yourself, but the material cost will multiply because you will be buying abnormally small amounts. It would be cheaper to have it done by someone who has everything in stock, and even if they apply a 2x margin on the material cost and charge fair labour costs, it will likely still be cheaper than doing it yourself.

For doing it yourself, the hardest part would be sourcing the material:

The material cost for what you need would be like US$10 or 20 when bought in reasonable quantities, but because you only need such tiny amount, it would probably set you back closer to US$100.

Then read the instructions carefully before buying anything or following them:

Now the reinforced part of the chainstays is probably the strongest part of the bicycle. But you can't put the stand back on over the carbon fibres, they are strong only under tension and pressing onto them with a clamp is the best way to break them.

The only thing that can be done to save the frame is to have patches welded over the holes. You would need the expertise of a professional welder to get it done properly so that the frame is made structurally sound.

Unfortunately, you may find that this repair is more expensive than simply finding a similar replacement bike or frame. The welding repair job will involve removing the wheel, crank, bottom bracket bearings and other components to in the area to be welded. The frame will need to be repainted as well of course.

To be clear, I would not recommend riding that frame as-is. The clamps of the kickstand probably added rigidity, by removing it the bike will be weaker. If one or both chainstays part then handling will change abruptly, dropping the pedals and BB down toward the road and putting a lot of stress on the chainstays which will bend immediately. The chain might hold the right hand side of the rear axle, but nothing holds the left side so the rear wheel would turn and jam up quick, also imparting a sideways force on you. If that happens at speed you're going to fall.

I wouldn't even scooter on that bike frame in that state, other than just to get home, once.

On the plus side, there seems to be a defined region of rust and wear and no skinny sharp edges. So a competent welder has something to weld to.

Perhaps adding some thin plate steel in/under the holes. To add rigidity you might choose one plate that goes across both holes, and spans the gap in the middle. Or adding some angle that goes under the chainstays on both sides and overlaps to the good metal before and after.

Another plausible repair is brazing one larger or two smaller plates in place, which is a lower temperature process and less likely to blow through the steel tube.

Expect to pay a competent welder for this job. I would not expect an amateur welder to do this without risking a lot of blow-through.

You would also need to strip most components off the frame to make life easier for the welder. Leave the paint there for now to prevent surface rust.

For finding a competent welder, look around for a small outfit that does racecar rollcages or similar. Take the bare frame in and discuss, and you can often get better rates by saying "its not urgent" If you can describe the repair then the welder can do it. Welders generally don't ride bikes, but they have an innate understanding of stresses in materials, so trust their thoughts.

Your other option is to find a replacement frame of a similar age and transfer all the good parts over. You can keep the best parts of both bikes.

7
Can my bike be recovered from the rust monster?
4
Can missing cage mount screws cause the frame to rust?
8
How can I determine whether rust has made my bike unsafe?
3
Can an aluminium frame rust from the inside if water has been in it for some time?
2
What fork size is 32mm (inside diameter on the frame) considered?
3
Can this bike be saved from the rust?
22
What different frame materials have been used?
1
Can this frame be used or is it done?
12
What are the most basic parts of a bicycle which cannot be upgraded over a period of time?
0
Can anyone Identify this bike frame?