How can I keep improving after my first 30km ride?

I'm a 17 year old girl. I started riding in November, and I don't know how to keep improving—I'm a bit lost. So I will describe my journey up until now and maybe you can help me.

One day my friend invited me to ride to a park. It was 10km, and it was awful. After not even 3km, I wanted to throw away the bike and grab an Uber. When I got home, my dad explained me that I had flat tires, so I guess it was a combination of being extremely unfit and that my bike was not in proper condition.

After that, I kept doing 4km (at about 17 km per hour) 5 times a week. Those rides were tiring but not impossible. Eventually they crept up to 8km (by accident: I would ride while shopping). Then I got interested in trying that 10km to the park again. I did it with my dad, and it was surprisingly easy. (We were going about 15km per hour.)

So I started doing 10km, but on a route without cars, so I could see how fast I could go and if I could maintain the speed. I did that during all December (at about 18 km per hour). It felt great. Sometimes I ran out of breath, but I could maintain it. (I also have chronic sinusitis, so I figured that is mainly the problem.) On December 31, I decided to do 20km. I did them in a bit less than an hour. I was tired after, but I did not struggle that much. I was extremely happy after.

Yesterday on January 7th (a week later) my boyfriend asked me to do 30km with him. I agreed because if I could do the 20km going "fast," then I could do more if I kept my energy and went "slow."

Here's the problem: he and his friends are VERY fit. I could keep up for the first maybe 14km, but after a 30 meter hill I was kind of exhausted. Then we slowed down and I completed the trip but very slow. The last 16km took us 1 hour (when I had done 20km in less than an hour before). I'm proud that I could do it, but now I'm a bit sore, and won't recover or be able to ride again for about a week at least. So I think that maybe I wasn't ready to ride that much.

What do you think? What should I do now? I don't know how much and how often I should ride between 10km and 30km to reach my goal: riding the 30km faster on a stable speed.

Also, here's a picture of my bike. It's a Halley classic 4x4 and has 18 speeds. It's very cheap, and comparing it to my friend's (that are much more professional mountain bikes) it feels like crap. But I wanted to be more fit before buying one. 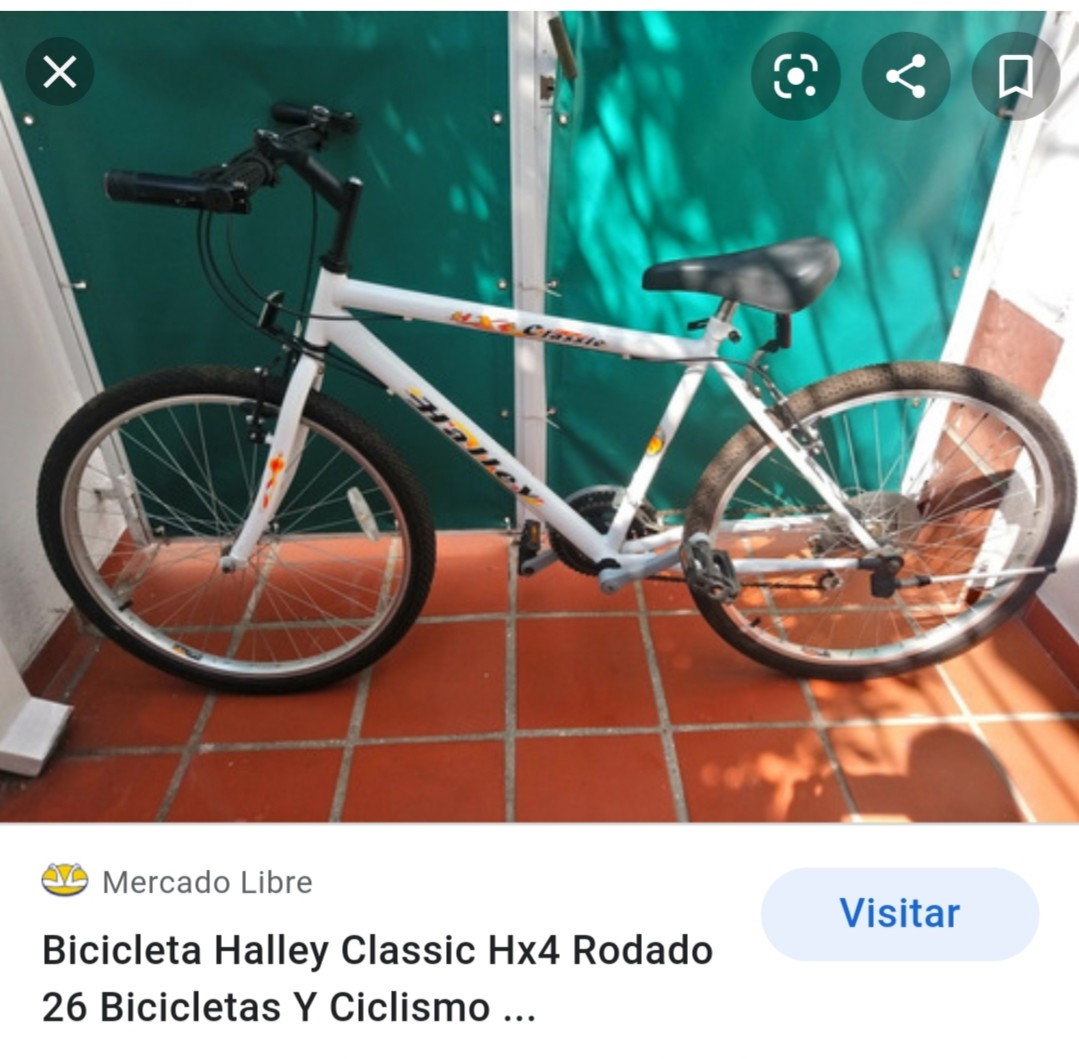 Cycling Weekly has lots of great articles. This may sound strange, but make full blast sprinting a part of your training. Usually a person gets tired because they don’t have enough oxygen moving into their legs. Sprinting works the great muscles of your upper legs. It doesn’t have to be a 1k sprint or anything like that. Just go flat out for a couple hundred meters then take it easy, or coast and breathe very very deeply. A couple times each time you ride and... You’ll be happily surprised. Happy cycling!!

You've got off to a great start, well done. Several answers tell you how to improve quickly, and they're not wrong. But you'll see plenty of improvement just by riding often, occasionally pushing yourself, and resting when you feel the need after a hard effort.

Riding daily to work/school/college if reasonable, with something for fun some weekends is hugely beneficial. It's how I got started, and now I do rides of hundreds of km, having never used a training program. Especially if it's winter where you are, don't feel guilty about not riding if the weather is bad. In the long run enjoying the ride is a good thing, while making yourself suffer is likely to put you off - the time for that may come in the future if you start thinking about specific goals of speed, distance, etc.

It never gets easier, you just go faster.

It actually sounds like you are doing great, that 30km ride was 50% longer than your previous largest ride which is pretty significant.

Just sticking with it is a big part of the equation here but, there are lots of training plans out there like https://www.cyclingweekly.com/fitness/training/cycling-training-plan-beginner-153317 which might help you.

When you are riding, try to focus on time and perceived effort instead of speed and make sure you spend about 80% of your time with easy to medium efforts and 20% with hard efforts while slowly increasing the overall amount of time you spend cycling.

https://athletearchitecture.com/blog/explanation-of-training-zones-and-rate-of-perceived-exertion has a good explanation of the training zones used in cycling and how they relate to your perceived level of exertion.

The 20% of the time you put into hard efforts stress your muscles, lung, heart while the 80% of time spent in easy/medium efforts provide them time to rebuild themselves and to help build up your endurance.

You did say you were sore after that 30km ride which again isn't surprising given how much longer it was then your previous longest adventure. Even so I wouldn't wait for a week to recover. Instead, take today off and then tomorrow do an easy ride for 30 to 45 minutes, make sure you keep your cadence up and gearing easy and then on Sunday try for a harder ride for another 45 to 60 minutes and then take Monday off.

Looking back at the training schedule my coach has given me over the years an average schedule on a non-race week might look something like this:

With any training routine there are also times where you reach plateau so you'll also want to change things up over time.

Also note, as your rides get beyond about 75 minutes you need to start thinking about feeding so that you don't bonk. It is also worth getting into the habit of doing post ride stretches - your legs will feel much better the next day if you consistently do these, especially after harder rides.

Fundamentally, you will see improvement by gradually increasing either the time or intensity of your riding.

Ideally, you should focus more on the time and intensity (perceived effort) of your rides and less on speed/distance. This is for two reasons; firstly, route choice and weather can make a big difference to your speed. Secondly, when you worry about your speed it makes it mentally more difficult to take your easy days easy.

To improve faster and further you will want to add variety to your rides.

For most riders, a key ride is a long weekend ride. Ideally this should be at an easy/endurance pace. You have now done a 30km ride - but probably at a pace that was too fast. The next step would be to repeat that 30km, but at a much slower pace. From there you would gradually increase the time you ride for. The speed and distance will increase over time as you get fitter.

On weekdays, some shorter high intensity rides are a good idea. You might ride for up to 60 minutes and within these rides include intervals of harder efforts including 30 mins riding hard or 15 mins riding very hard. Many people like to use hills for making their efforts.

Rest is important, this is when your body adapts and get stronger. The amount of rest you need is quite specific to you and everyone is different. However typically people need 2-3 rest days per week, and every 4th week as an easier week (less time riding and less intensity).

For the bike, don’t worry about it as long as it at your size and properly adjusted, if you do mostly roads and parks. The most important is to enjoy doing it.

You mentioned riding with friends, then it might better to have a bike of a similar kind than your friends (road, gravel, MTB), but it's not a requirement.

The answer depends also on what you’d like to improve: is it more endurance or sprint performance? For pure performance, I'm not really qualified to answer, but for casual riding, just ride (by casual, I don't mean slow, rather on a pace such as you don't need too much time to recover after a ride).

Once you know your pace, the distance doesn’t really matter. So it’s somehow more effective do 15km/day at a relaxed pace than 60km tours on the weekend (as long as you eat and drink appropriately).

A good thing is to use your bike as a mean of transport, if it's possible: your body will get used to the bike, develop the muscles even if you don’t push yourself. I was personally using my bike for every transportation need for less than 13km (including commuting to school) — I could average after some practice 22km/h (on that kind of bike — for commuting, a bad bike is an advantage, less worries about the bike being stolen), so it was actually not much slower than using a car (because parking was not easy, to the car would loose time to find a parking spot and then walk to destination).

Note: I noticed that beginners usually have their saddle too low, the picture suggests me to check that it might be the case: for roads/parks, I set it up so that I only touch the ground with the and of the toes (so I’m not sitting on it at the stops). You’d be surprised to see the difference.

First, don’t worry about being fit before getting a better bike, if you can afford one. Once you have a better bike you’ll wonder how you got along without it before.

Second, as far as your distance concern goes, don’t stress about it. Push yourself hard, but don’t overdo it and be sure to allow your body to recover between rides. The less conditioned you are, the more recovery time you’ll need. That’ll improve with time. If you feel like you’re not improving, you may need more recovery time OR you’re not pushing yourself hard enough.

Most importantly, just keep riding. You’ll get a feel for it over time.

Very glad to hear that you want to give it more try rather than give up.

Not the answer you're looking for? Browse other questions tagged mountain-bike training beginner advice or ask your own question.

6
Train cycling legs for a long walking trek
3
How do I taper for a century+ ride?
15
How can somebody with Type I diabetes keep blood sugar levels acceptable during and after a multi-hour ride?
6
3x increase in endurance in 3 months?
1
First Road Bike - Some Options and Issues
3
How stay fit enough to make moderately hard rides a couple times a month?
1
Training to become a good cyclist
6
Minimum training maximum outcome
4
Re-learning how to corner aggressively at speed after bad experiences
2
Basic MTB suspension adjustment