Is cycling on this 35mph road too dangerous?

I'm thinking of bike commuting to work and there is a stretch of road with no sidewalk and 35mph speed limit. Is this too dangerous for biking? I'm not in the best shape so I can't go very fast. This is Hawaii in the United States.

As an experienced cyclist who has been all over the country and even done hundreds of miles on interstates, after finding that location on Google Maps, and checking how you might conceivably get there, there is absolutely no way in hell I would ever be caught dead there on a bicycle.

How you answer this question is not by taking one isolated photo out of context, but by looking at the totality of how you would get into and out of the location on your bicycle. By doing this, we can quickly see that it would be unwise to use this road, and a serviceable (and far safer) bike path alternative exists.

There are two ways to get there: The first is to exit H-1; your picture was taken where that off-ramp merges with Nimitz Hwy. I won't discuss this further as it would be illegal to cycle there anyway.

The second is to enter Nimitz Hwy from Kamehameha Hwy at Middle St here:

That means you would have to ride in one of the two left lanes, likely in the middle of heavy traffic, from at least there until you merge with H-1 later on up the ramp:

You would be cycling in the lane where this picture was taken, and would then have to cross those two lanes to the right which are full of cars coming off H-1. This is extremely unsafe unless there is virtually no traffic. I might do it at four in the morning. I would not go anywhere near it in normal waking hours.

Fortunately you don't have to. Just to the right is a bike path which runs parallel to this bit of Nimitz Hwy, ending at Peltier Ave. The sidewalk on the right turns into the bike path just after Middle St:

Instead of trying to play Frogger with high speed vehicles up above, I'd use this bike path.

Given that it's pretty much impossible to get to the point in your picture safely, I've omitted the analysis of how to get out safely.

The difference is in the shoulder and general condition of the shoulder. In your photo there IS a paved shoulder, compared to some of my roads where the seal stops at the white painted line.

However there's nowhere to go if things go wrong, between the concrete edging blocks and what looks like an elevated roadway.

Personally I would not ride that road as pictured, unless it was literally the only way through.

It seems that cycling on a Highway or Freeway is illegal in Hawaii (though not completely confirmed) So if you do there could be fines if caught, and given the USA's attitude toward liability, you may be on the hook for any events or accidents where you were involved or even just near.

Bicycles are prohibited on freeways and sidewalks
from https://www.lonelyplanet.com/usa/hawaii/narratives/practical-information/transport/getting-around/bicycle 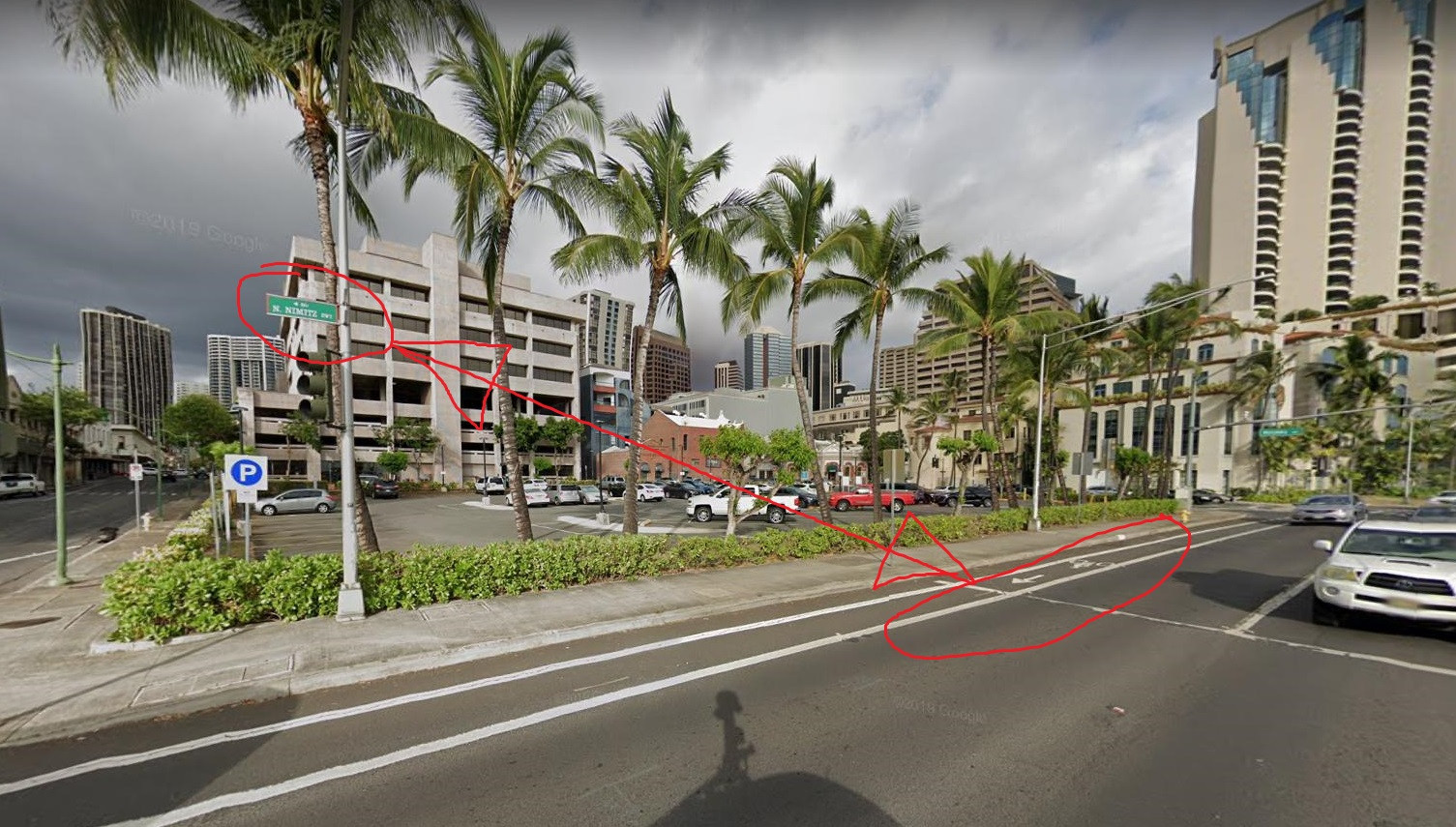 So theres evidence in both directions that "highway" may not mean the same thing to different people.

From comments - Google Maps website has a bicycle map mode, where dedicated bike paths, dedicated lanes and bike-friendly roads are marked. There is a bike path/lane underneath the road.

This would be fine:

There's a shoulder, you can ride on it (if it's legal) and speed limit is pretty low. Not the most pleasant place to ride, but it's okay.

However I would advise against it, because the part where you get run over by a bus is not shown in the picture. You say you're "thinking about bike commuting" which hints you're not used to it, which makes me think you are not used to quickly identifying which road features are fine and which are really dangerous. Which means you're showing the wrong picture.

For example, the dangerous part will most likely be in the distance under the overpass, where either the "bike lane" will end, or you will have a situation like this: 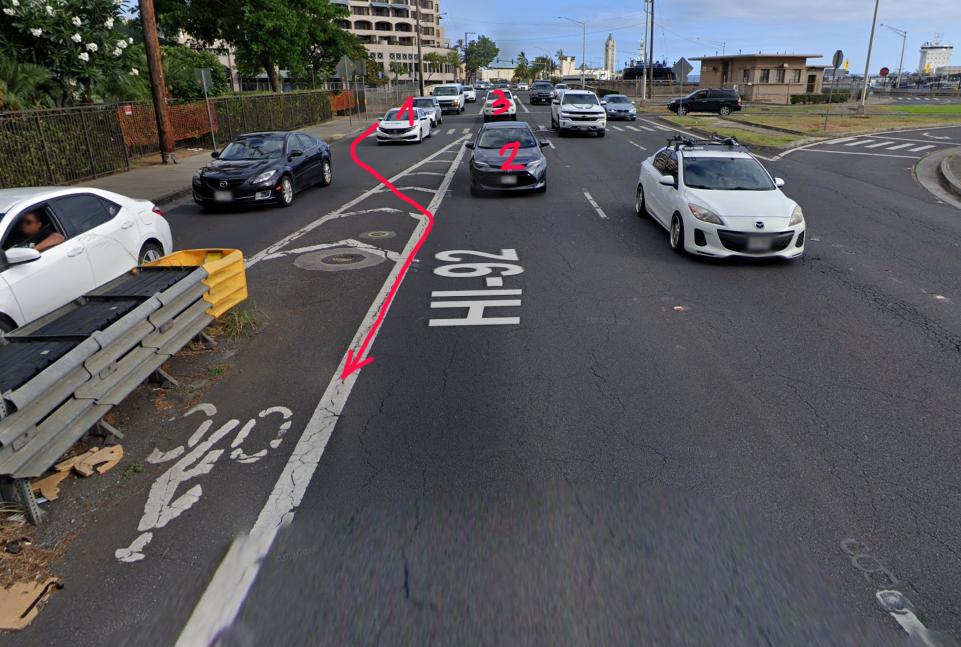 Now in this situation if you don't want to exit the main road, you need to follow the red (hand drawn) arrow, you have to go from lane 1 to lane 2, but the car marked 1 is in the way. So you have to stay in front of car #1, and take the lane, to be able to swerve left and change lane without hitting car #1. By then, car #2 has passed, and the driver of car #3 sees you going into his lane. He has no idea you're actually aiming for the ridiculous bike lane, so he thinks he's gonna hit you, and piles on the brakes, then gets rear-ended.

It would be much safer to position yourself properly well in advance so you don't surprise the drivers by changing lane at the last second, like so: 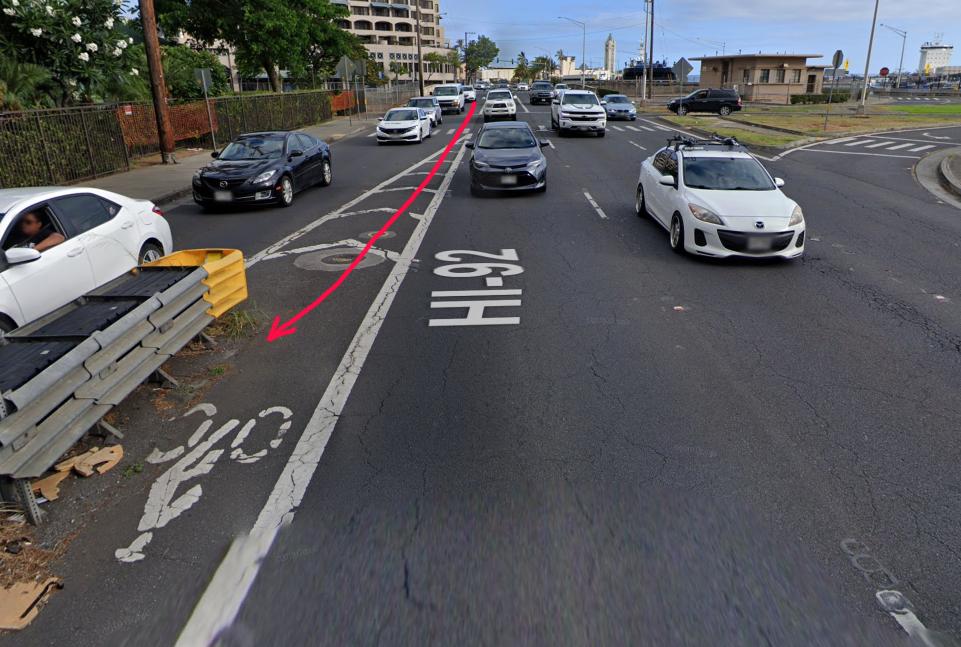 But then you have to ride in a semi illegal position between lanes, with cars on both sides, and probably need to go a bit faster to keep up with traffic. This is much safer to do in a traffic jam where the cars are pretty slow, so you can go with the flow and both the driver to your right and your left have enough time to notice you're there.

So, it would be safer to ride on another road, but if you have no other option then you need to really think in advance about how to handle the intersections and lane changes.

Looking at google maps satellite view is a good idea. Very often you will find better alternate routes or paths that are not labeled nor visible on the street map but show up on the satellite picture. Also this will give you an idea of what to expect so you can see it coming and anticipate.

Timing is also important: between the red light and the green light from the perpendicular direction, there is a moment where even a dangerous intersection doesn't have any cars. So it is often quite a good idea to be the last guy to pass the traffic light just before it turns red.

For Oahu specifically, Hawaii Department of Transportation publishes the "Bike Map Oahu" which outlines bicycle routes around the island. They classify the routes into "Novice friendly", "Experienced", and "Not Bicycle Friendly".

I see that there is a "Nimitz Bike Path" that runs parallel to the Nimitz Highway, which you may find useful (not sure exactly where your route would take you).

On the About the Bike Map page, it does say:

Bicycles are prohibited from using the interstate freeways.

I suppose that technically means the H numbered freeways (H1, H3, etc) but there are other freeways like you show in your picture that are substantially the same layout and I wouldn't want to ride my bike on them even if it was permitted.

Here are my thoughts:

Personally, I wouldn't think twice about it. Granted, as long as it has a bike-lane or shoulder to get out of the way if need be. I consistently do about 30mi rides and during one section I have to take a road whose speed limit is 40mph or ~64kh. I almost always find my self going faster than the cars. I have never really had any problems. With the only one being a guy turning out in front of me because he was only looking for cars. If you know generally what the "mood" of the road is, you can get a really good idea on how drivers will behave/react when they come up on you during your ride. Personally, if there are cars anywhere behind me, I know they can just pass me but for the sake of giving cycling a better name, always get over. Make it as easy for the cars a possible without putting yourself or other in danger. Also, make sure to check your state laws on where you can bike. The states make the rules for your safety!

If your not that fast or might not want to get all sweaty for work, I would just say, feel out the mood for the road, if you deem it safe, stick to the sides and you should be fine.

Edit: If this a limited access highway, I would not suggest you try riding it, for your safety and the others around you. Try to find a bike trail or maybe less direct routes on smaller roads to get to work. The street I speak of above is an in-town road.

All cycling has some risk, but the rewards are fantastic. I'd look for alternative routes as they will probably be much nicer and less hassle. Enjoy life!

As a newcomer, I'd recommend the less challenging routes to start with. Bit by bit you'll embrace being assertive. You'll learn that sometimes roads are a lot better than dedicated cycle facilities. (You mustn't allow yourself to be pushed into the gutter by traffic or highway engineers.) If you have to chose between a helmet and training then go for the training. An accident that never happens is 100% survivable and lasts for life. In the UK we have a book called Cyclecraft which is excellent and perhaps an eye-opener.

Not the answer you're looking for? Browse other questions tagged safety road or ask your own question.

16
When should cyclists use pedestrian facilities?
17
In shared bicycle/pedestrian facilities next to a road, do I obey the pedestrian or the vehicle traffic control devices?
28
What's the safest way to turn left from a right-side bike lane?
15
What is the safest and most courteous way to ride on a two-lane road?
6
Get off bike on crosswalk?
24
At what point does a road become too busy/fast to ride on safely?
7
How to cross major road 3 way intersection
25
Is it really safer to ride in the road than on the sidewalk?
52
How can I make it clear to other road users that I'm an inexperienced cyclist?