There's a pair of long bar ends that I came across on Decathlon (https://www.decathlon.in/p/4407859/cycle-handlebars-stems-and-grips/3-position-long-bar-ends). I was wondering if these could be rotated 180 degrees (from upright position) to convert them into drop down bars or maybe tilt them by 90 degrees to make an extended aero flat bar? Can it work? 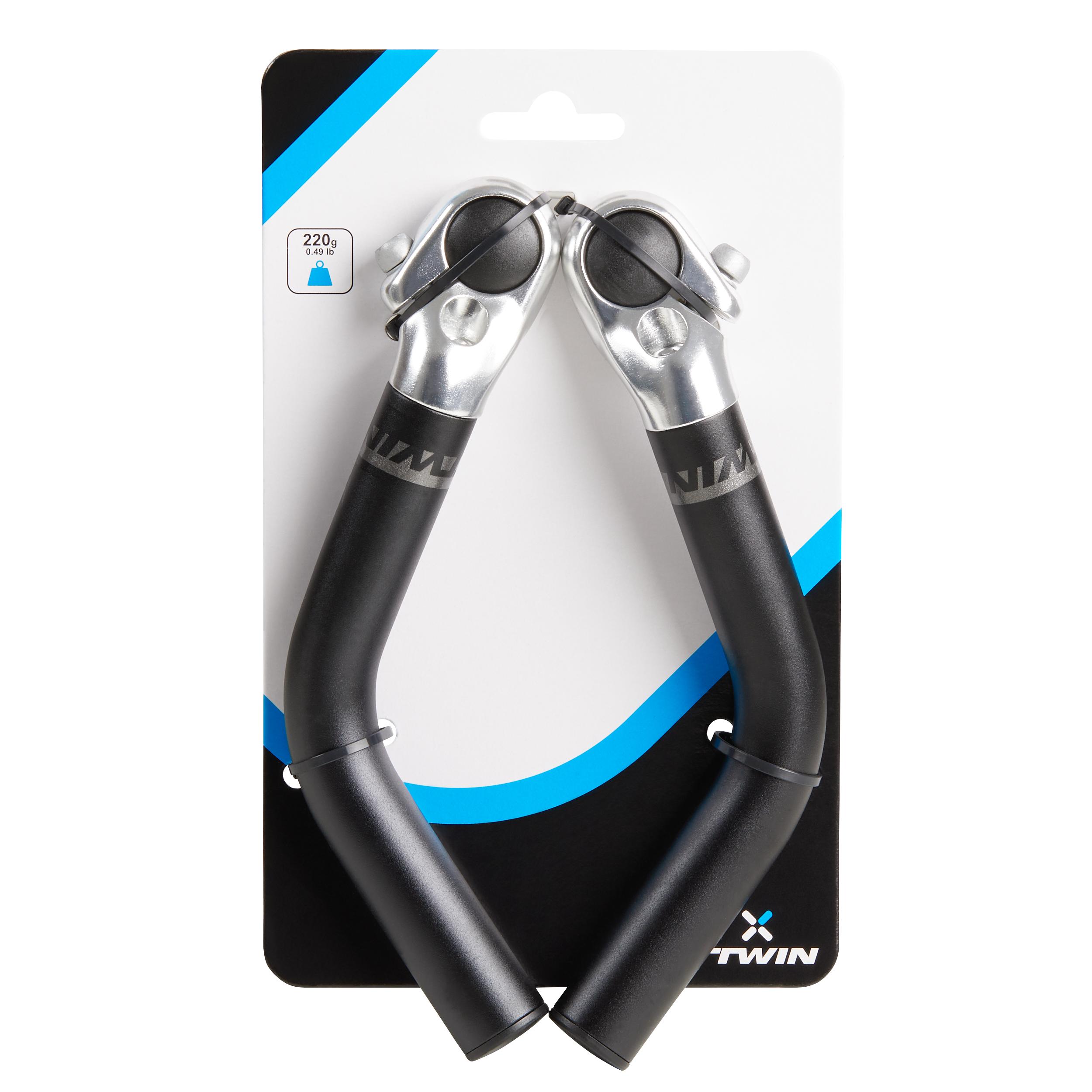 Yes - this is a known way to get stubby aerobars on a flatbar MTB, that don't stick out too far but provide some benefits of an aero position.

Downside is that you generally can't have brake levers, so your hands are a long way from the brakes. This is definitely not for urban riding of any sort.

Likewise, you're further from the gear shifters. Okay if you settle into a gear and stay there for a while, but not good in undulating roads.

Lastly remember that since your hands are closer together, there's less fine-control. So to start with it will feel very squirrely, and crosswinds can have a much larger effect before you can recover. Over-compensating is possible too.

Normally these "Bar Mids" (instead of Bar Ends) would be attached to the bar inboard of your grips, brakes, and shifters. So all that has to come off the bars first.

If you do races on this bike, remember that many disallow the use of bar ends, so bar mids might be disallowed in the event.

They should work fairly well as aero bars or drops, so long as they clamp securely. On a good sturdy aluminium handlebar this shouldn't be a problem at the ends (drops) but as aero bars you may have to put them further apart than you'd like, depending on the taper of your bars. You will need to torque them up fairly hard, and test them in benign conditions. You may also wish to wrap them in bar tape (look for instructions for wrapping clip-on bars).

The lack of brakes will limit their usefulness, but most of us with clip-on aero bars don't have brakes on them. This means they're best for long (almost) flat sections with good visibility. It wouldn't be completely impossible to fit (cable) brake levers, subject to the diameter, but that would start getting expensive.

I have tried several bar end configurations, but particularly rotating them 180 degrees (downward) was not feasible for the next reasons:

For reference, look at a side view of a real drop bar versus where the straight downward bar end would be.

In my experiment the handling resulted much too weird and unreliable, and would not result in a comfortable "aero" position: hands too close to body, elbows bent narrower than 90 degrees.

On another experiment I placed the bar ends between the shifters and stem. Either with short, straight bar ends and with long, inward-curved ones. Both resulted in, at least, one more hand position, which is good for long rides on smooth terrain.

The curved ones resulted a bit better because the curved part was rather long and provided a third hand position very far ahead of the regular straight handlebar. The riding position somewhat resembled the one on a TT handlebar, but lacked the arm rest, so I could not sustain it for too long. However, It allowed me to ride with my arms close together ( more aero?)

I wrapped these extensions with handlebar tape, installed them as close together as possible so they touched in the middle, so they form an almost contiguous arch.

Here is the most clear picture I preserve of the setup: 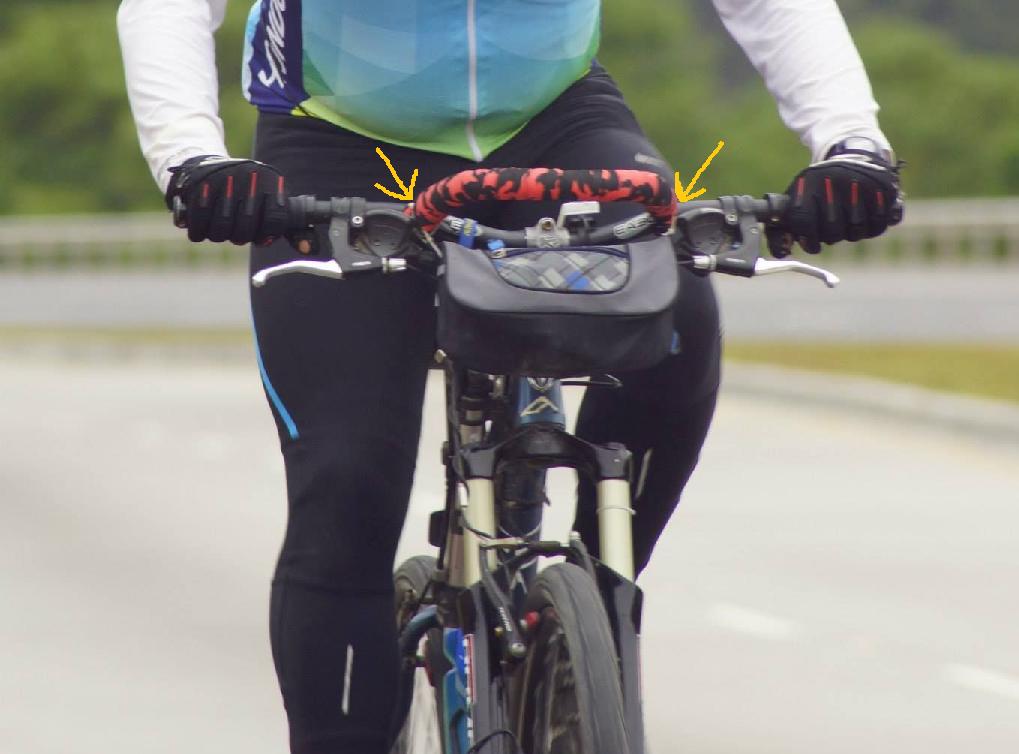 I definitely agree with Chris H's comment regarding this setup not being adequate for urban riding and I add that is not good for peloton riding either: hands are too far away from brake levers. It's only good for riding on open road with good visibility.

There is at least one commercially available product that should help overcome the issues mentioned above. (This is not a product reccomendation or endorsement of any kind, I have never tried these). However, you'd still have to solve the lack of brake levers. 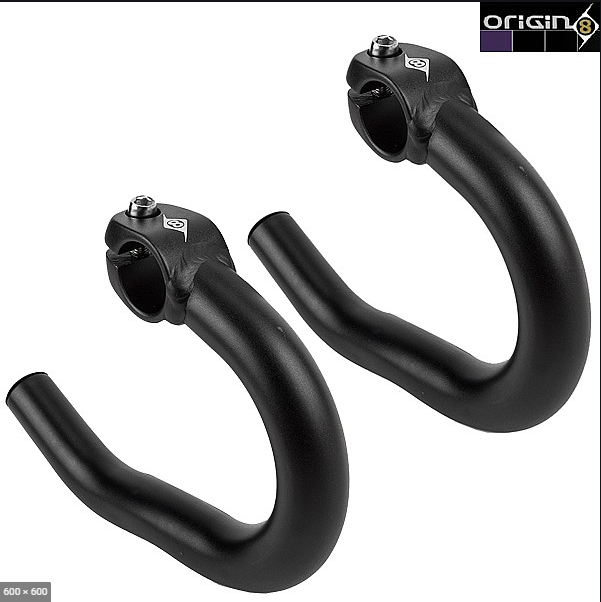 Not the answer you're looking for? Browse other questions tagged handlebars aerodynamics drop-bar flatbar or ask your own question.

31
Pros/Cons of Bar-Ends?
3
How is bicycle fit affected by switching from a riser bar to a flat bar?
20
Deterrents against partial (component) theft
5
Drop-Downs on Fixie
3
Are there geometrical differences between framesets optimised for flats vs drops, other than top tube length?
1
Drop bar to flat bar conversion
0
How will swapping drop bars to butterfly bars affect bike fit?
0
Drop bar ends and brakes