I'm a commuter with a ~13m daily round-trip. I've been riding this on an MTB for 8 years, but I'm looking to upgrade. I recently tried out a 2012 model Specialized Tricross; this having been recommended as a road bike that retains the commuter niceties (rack/mudguard mounts, etc) and can handle the light gravel tracks that form part of my route.

I love the bike, but I found one fundamental problem: The cantilever brakes set off this (initially) terrifying judder under pressure. On one downhill section, I couldn't brake enough to stop accelerating without this vibration running through the whole bike (and me), massively increasing my stopping distance. As a commuter in Oxford, being able to stop quickly and confidently is a must; something I've always been able to maintain with the V-brakes I'm used to.

Back at the shop I was told that the judder is something that all CX bikes share, and that it might have been accentuated by the fact I was on a fresh bike on wet roads. I've also read that softer shoes and toeing in can help reduce the level of vibration, but that nothing can be done to remove it completely.

So, can anyone point out a way to address this? Is it something I'd simply have to get used to, or have I just picked the wrong kind of bike for my needs?

Thanks to 'grivooga' at Reddit (via Cyclo), this is an ideal description of the issue:

What happened is that the fork blades and your headtube flexed. Just a little but enough to change the distance between the brake cable stop and the brake arms. This caused the brakes to pull harder. Something had to give, either the tire will skid, the brake pad will skip, or you'll go over the bars and crash. In this case the brake pad skipped on the rim. That released the pressure momentarily the frame and fork flexed back then the pad caught again and the process repeateded. The whole process happens very quickly, many times a second.

I'll try one of the recommended fork-mounted hangers, along with some better toe-in and maybe softer compound pads.

For future readers: After a couple of telephone discussions and a short wait, I took it out again with a fork-mounted hangar attached as shown: 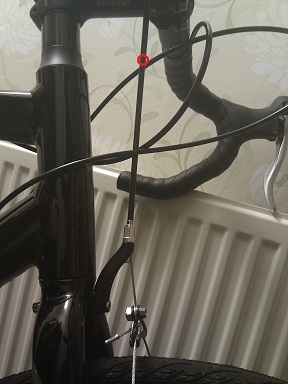 The red circle shows roughly where the original hanger was situated. With the drop significantly reduced, all I feel now is the occasional soft vibration, and only when I lean fairly hard on the front brake. Enough of an improvement that I bought the bike.

A simple solution from Specialized itself to your problem could be the installation of a Tricross Fork Brake Hanger. 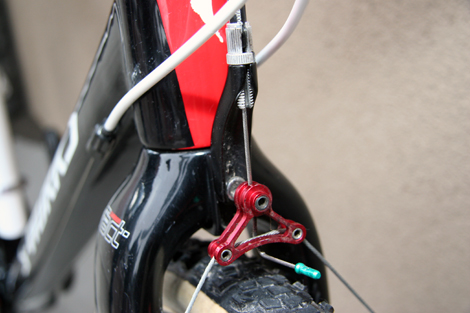 Here is a lengthy discussion at reddit/r/bicycling about this exact same problem with the same bike: Carbon forks flex under braking. How much is 'normal'? How easily do they fracture?

Here is an explanation and answer Technical Q&A with Lennard Zinn: How to stop cyclocross brake chatter

Very brief summary of Zinn's article: Brake shudder is inherent to the design of a center-pull cantilever brake. Reduced brake pad size, lots of toe-in, and a tight headset can help.

Assuming I know what you mean by "judder", properly adjusted cantilever brakes with decent pads will not do that. They will screech and sometimes vibrate (as will all caliper brakes) when not properly toed-in, or with worn pads, but proper adjustment (and pad replacement as needed) should fix that.

Rather than fiddle with the existing brakes, change them for V brakes, which use the same mounts, or to normal caliper brakes.

I just changed the front canti to regular dual-pivot long-reach Road bike calipers. I found an off-brand for $23 in my local do it yourself bike shop called Kraynicks here in Pittsburgh, USA.

I tried replacing the hanger, which helped but chatter was still there enough that it bugged me!

Changing to a caliper solved the problem. My brakes are smooth now, with no chatter whatsoever.

What's the love of Canti's in cyclocross ? Yeah, the mud thing! Whatever.

I would go back to the shop where you purchased the bike and ask them to let you test ride a similar bike under similar conditions.This will eliminate the They all do that excuse.Even the factory makes mistakes in the assembly or manufacturing process or something may have been damaged in shipping.

Not the answer you're looking for? Browse other questions tagged brakes cyclocross or ask your own question.