I'm comparing the following endurance road bikes, all in 58cm or L:

I'm 6'2" and recently recovered from a herniated disk and hip arthroscopy. Given that, I'm looking for a geometry that is "upright" in riding position.

How can I best compare or measure 'upright-ness' between these bikes?

I know the basics: shorter reach + longer stack == more upright. But those measurements actually seem to conflict here, and I'm not sure the degree to which other measurements may counteract them. For instance, the Roubaix has the longest stack, but also a relatively high reach and the shortest head tube length. The 'best match' seems to very widely by different categories/measurements.

Is there a slightly more nuanced way to compare this measure between the bikes shown here? 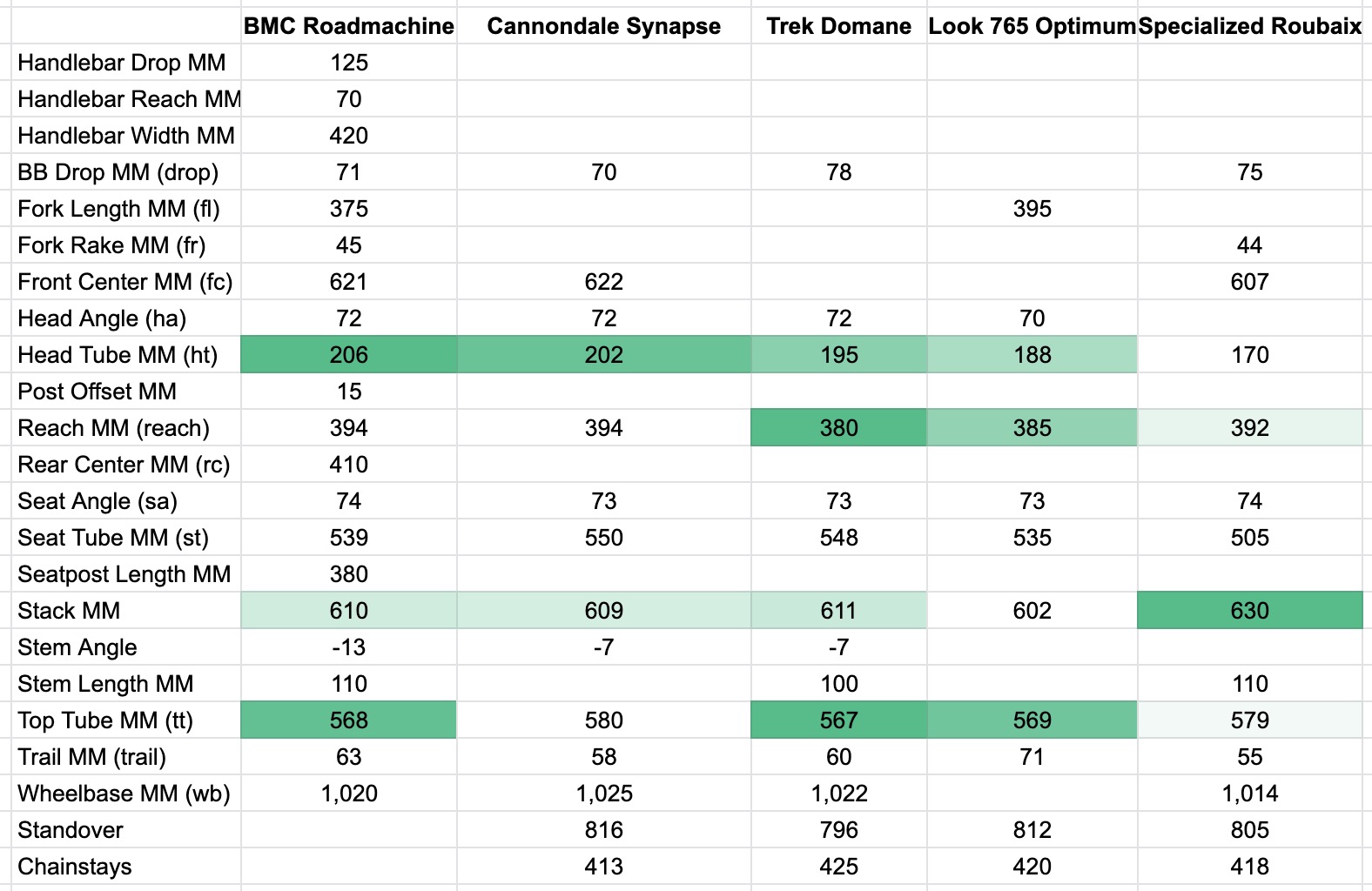 Bike Insights has used stack to reach ratio to compare a number of brands of bikes. One limitation is that they may not have every model and every year of bike entered on their site, but their data appear reasonably complete for major brands. The link I inserted may take you to a comparison of the 2020 Roubaix Comp and the 2020 Trek Domane aluminum (but the carbon Domane has the same geometry). It should show a picture of two overlaid simplified geometry diagrams.

They rate the Specialized in your size as being about average in terms of stack to reach compared to other endurance road bikes, and the Domane as being relatively upright. They discuss their rationale and some limitations of stack to reach here. They do let you visualize how the frame geometry affects the relative riding position between two bikes, although they do not include the effect of the stem and handlebars.

It is important to remember that frame stack is measured to a point just above the head tube (except for the Roubaix, see comments on Adam's answer), and that we further modify fit by spacers under the stem, the stem length and angle, and the handlebar reach. Riser handlebars are rare on road bikes, but a number of Roubaix models are equipped with such bars. Riser bars add further stack to your final position. You may be able to achieve your preferred riding position on any of the models you listed.

You're almost there. You can quantify "uprightness" as the stack/reach ratio. Just add another row to your spreadsheet and insert that formula.

I'd say anything over 1.5 is pretty upright; down around 1.4 is pretty racy. You can compensate to some extent with spacers and stem length.

Not the answer you're looking for? Browse other questions tagged geometry or ask your own question.

4
How does the geometry of cross bikes affect on-road handling?
3
Why do current mountain bikes have such steep top tube? Comparing my Kona Blast 2001 vs 2019
4
Why can compact frame in road bikes be made in less sizes than the traditional frame?