Does this trike have a spoiler for downforce?

I saw a 1977 Masa Slingshot leaflet on ebay (source), copied below.

It has a lot of differences from a modern tadpole, in particular what looks like a "spoiler" on the front.

Is this similar to a spoiler on a sports car that is intended to provide more downforce to the wheels at high speed? Would that be effective / beneficial on a trike? I have read that this design was intended for oval track racing, so I assume the riders would get up to a good speed, so maybe that makes sense. I also read that with its long wheelbase a lot more weight went onto the rear wheel than on today's trikes, which also support the idea. And the brake seems to be on the rear wheel as well which seems consistent with that impression of weight distribution.

On the other hand, is this device just intended for something else? It actually isn't very wide or large in comparison to the frame, you'd think for relatively low-speed spoiler more surface area would have helped and looks like it should have fit. Would extra downforce even be needed? Plus, a larger "spoiler" might have acted somewhat like a fairing to reduce drag. (Is that actually all it really is, just an early or inexpensive / lightweight fairing design?)

Looking around I can find other images of these Masa trikes but very few which have that attachment. The few examples I did find lacked any explanation, though a forum post did use the same term "spoiler". No examples of modern racing recumbents or trikes that I could find had anything like this. 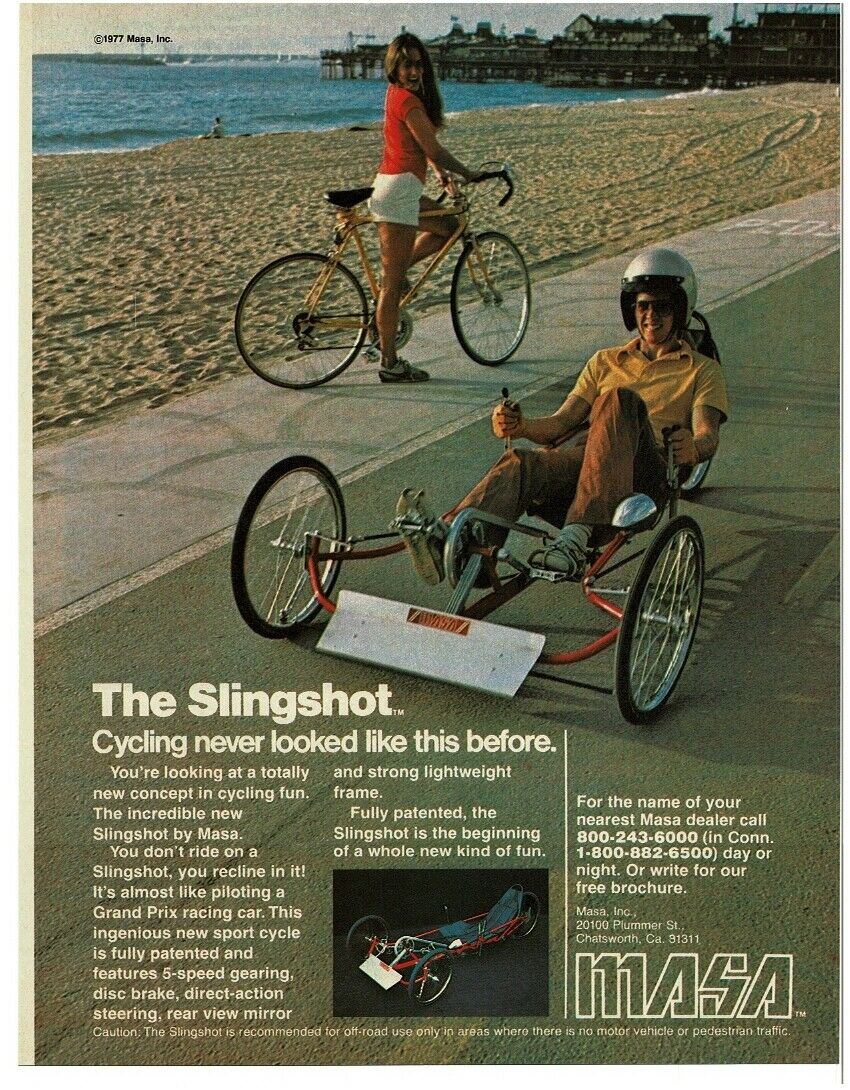 According to this post from an owner the wing is for looks:

Earlier models came with an aluminum ‘wing” over the front axle, probably more for looks than anything, and a bullet-shaped, sports car-styled rear mirror on the left side.

MASA was a Japanese company, but targeted the US with this form of racing. In 1975 they finally brought a few of these over here and did some exhibition races between their own staff. It never really caught on, but they still imported about 1500 of these into the US over a three year period.

Since these trikes were focused on track racing only against like trikes, the lack of braking and their size was not a problem. Their wide, long front end was thought to be better protection for the rider.

I found another source of images of a similar brochure with more detail.

It states that the trike has an:

So it was clearly intended for aerodynamics, although not specifically to increase downforce.

Actually this text seems to be very carefully (weaselly) worded - it says "aerodynamically designed" rather than "aerodynamic". It seems to me they are not claiming it actually had any real benefit.

Cut from the bottom left of this page: 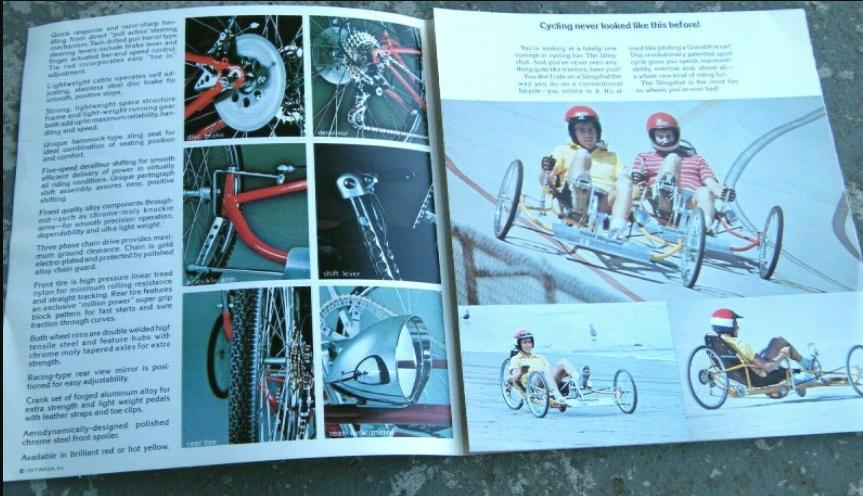 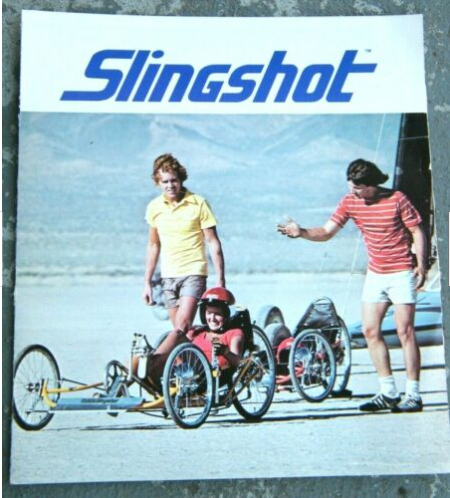 It may be worth quickly reviewing some background on what spoilers are. In Formula 1 automotive racing, cars go fast enough and they are shaped such that the car body can generate aerodynamic lift. Needless to say, this would lift the wheels off the ground, and thus some of the engine power goes to waste as it just spins the wheels freely. Spoilers are devices that affect the airflow around the car to reduce lift, either by disrupting the airflow in general or by redirecting it to create a downward force. Aircraft also deploy spoilers when they want to reduce lift, e.g. during landing, deploying spoilers will reduce lift and will place the full weight of the aircraft on the wheels such that the brakes are more effective. This ~12 min video by Mentour Pilot (a commercial pilot whose YouTube channel targets aviation enthusiasts) discusses that use case in some detail if interested.

I'm not an engineer. Nevertheless, I'm pretty confident that human powered bicycles can't get fast enough to generate enough lift where they'd need downward force to counter it. Also, I doubt that a recumbent is the correct shape to generate sufficient lift. For example, Formula 1 cars appear to have smooth undercarriages, and that bicycle definitely doesn't. Therefore, I doubt that bicycles in general need any assistance in generating downward force to keep their wheels planted.

Spoilers on cars more generally affect the airflow around the car's body, often to reduce aerodynamic drag, but sometimes just for decoration. However, if that plate does anything aerodynamically, I think it might be better characterized as a fairing. In aircraft, Wikipedia's definition is

... a structure whose primary function is to produce a smooth outline and reduce drag.

That aluminum fairing on the front of this recumbent is changing the shape of a section of round tubing to something with (we hope) a more favorable drag coefficient. However, I'm not sure what the drag coefficient of the resulting shape is, because it's not a teardrop or anything approaching that. Also, the plate is possibly adding some exposed frontal area, and if so, the reduction in drag must offset that added area. Nevertheless, if there's any aerodynamic benefit to that plate, it's probably via that mechanism - changing the shape of a round tube to something more favorable.

I have six of them.. What would you like to know?

Edit: I have been informed that my answer is not an answer. Well, it was a question so...

The common principles of aerodynamics would suggest that the front spoiler does create downforce as it creates drag. The real question should be,, does it provide any benefit? The short answer would be no. I do not know of anyone that has done any actual testing on these (including the original Honda engineers that designed it) but I would presume the spoiler is just for looks. It is not of a sufficient size nor shape to direct any air over the rider's feet, legs or body. I own six of these trikes and have ridden many miles with the wing and without. I have observed no noticeable difference. I have had one without the spoiler up to 32 mph. I have not attempted to reach that velocity on one with the spoiler because it is on the original tires and I have not transported it to location that would lend itself to such a test.

Hopefully that answer will satisfy the uppity-ups. As the creator of the original MASA Slingshot & R&R TryCycle Registry I believe I can answer most questions related to these trikes.

Not the answer you're looking for? Browse other questions tagged tricycle or ask your own question.

1
How much resistance comes from each part of a bicycle?

12
What should I consider when looking at a recumbent trike for commuting and winter riding?
4
I weight about 40 lbs (18 kg) more than the weight limit for the trike I can afford
1
How do the wheels attach on this trike design?
4
Tire selection for winter trike riding?