I have a titanium frame with aluminium bottle cage bolts screwed into it. I tried to remove them the other day and one of them snapped off at the head.

I drilled a hole through the remains and tried using a reverse-threaded screw extractor to back it out. Unfortunately, this happened: 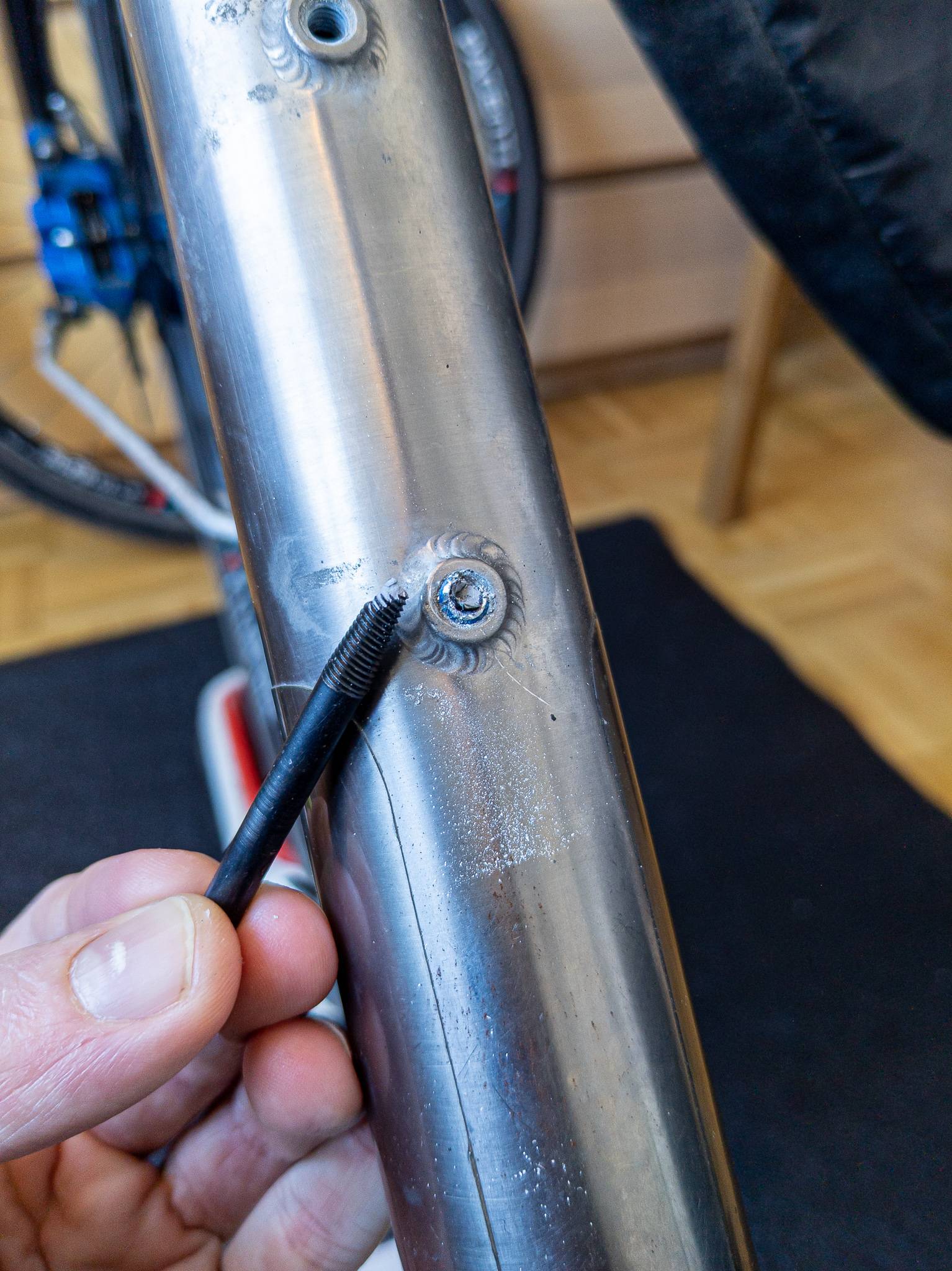 The bolt is seized so badly that a steel screw extractor snapped before it broke loose. Now I have a chunk of steel in an aluminium bolt in a titanium frame. What options do I have?

The first thing I would do is assess the question of what happens if your efforts result in the eyelet threads getting wrecked. Is the eyelet and its welded connection chunky enough to fix it by helicoiling? Look at a helicoil tap chart. Does it have enough meat to handle a 6.145mm hole in it?

Then look around a little at the ti framebuilding suppliers to get an idea how big the hole in the frame is. Is the eyelet basically this thing, 10mm flanged top and 6.5mm shank dia?: 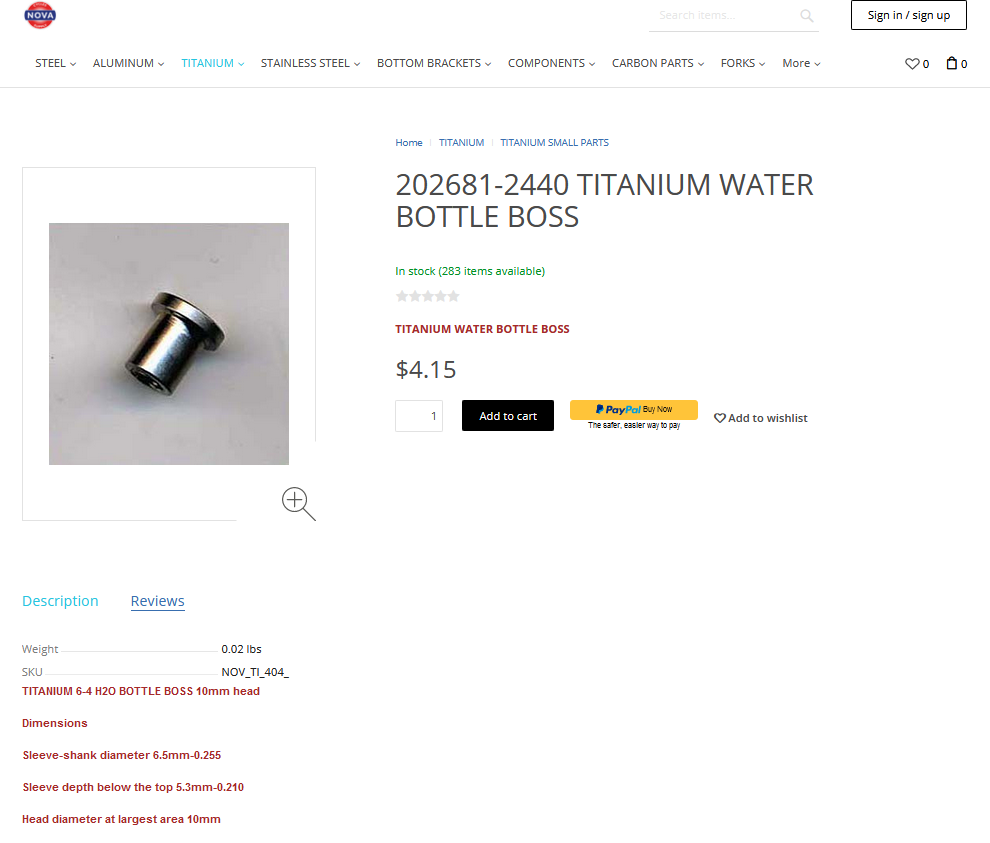 (6.5-6.145)/2 is not much but it's not nothing. Is the bead placed in a way where it's going to shore things up at all, or is it only connecting to the top flange? Ideal would be if the helicoil threads get at least 6mm worth of chunky material to reside in between what the flange and joint give, so the 3.55/2 part isn't being asked to do anything structurally. 5mm would probably fine, and less than that I don't love.

If you can helicoil, life is easier. You can try and brain surgery your way through and keep helicoiling as a backup plan, or you can skip that part and obliterate everything and just helicoil it, that's up to you. Proceeding in a way where the threads remain intact at all costs is more perilous and time-consuming.

Broken extractors can be a big problem because they're made of such hard steel. There's a hierarchy of tool hardnesses in industry and extractors are around the top of it because they're intended to be able to bite into fasteners that themselves are made of hard stuff, like stainless or grade 8 bolts.

This is what I would do if I had to tackle it: 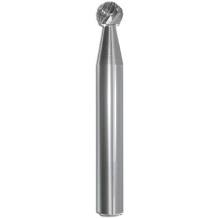 This kind of Dremel bit, a round carbide burr (probably some other names too) is the most effective thing I've found that can cut into the broken stub without wandering around. The challenge in situations where you ultimately want or need to save the frame threads is you have no forgiveness for the tool wandering, and this is the safest way I've found of addressing that. (You have to be very careful, go slow, hold it firm but don't force it, and all the other usual precautions). You could try to go the whole way with it, or just establish a hole/divot to start a drill. For a drill to follow it, you need something made for drilling hardened steel, i.e. proper fancy carbide bits.

So you can use the round carbide burr and, optionally, your carbide drill bits to gradually get through the broken extractor. Once that's out you're back to where you started. What I would do is take advantage of the relative high hardness of ti by switching to a drill hardness that will be effective against the aluminum but bounce off the ti, like say a wood-oriented bit, making it easier to get through without hurting the threads. Cut out as much of the aluminum as possible with this succession of drill bits. If you nail it up front with your perfectly placed pilot hole, which the round dremel burrs can help create, you can use your series of larger drills to clear away enough al to have the peaks of the frame threads poke through.

We see that transition happens at about 4.134mm. So looking at a drill bit size conversion chart, we see from an imperial set it's between 5/32 not quite taking you there and 11/64 being big enough it starts eating frame, but there are some other sizes that do take you right to the cusp if you're willing to order fancy drills from the internet: 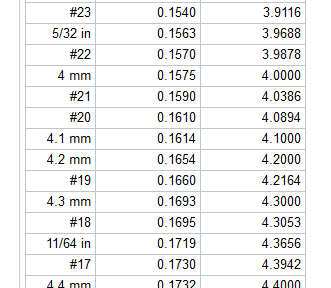 In other words, 11/64 takes you there but also works against you if you're trying to save the frame threads. A maximum case attempt at saving them would probably involve getting a 4.1mm bit.

Once you're there, looking at the remains of the bolt and the peaks of the threads poking through neatly, I would try to dig in with a stainless steel scriber on the top, trying to clear away enough that you can begin to get a tap started into the threads. You can be aggressive since the ti will be harder than the stainless. One of the things working in your favor if you take it this far is that the sections of thread that aren't corroded in place will start falling away. It may be easier to use a bottoming/plug type M5 tap, which is a good reason to have them around. Once you get it started into the frame threads, you should be able to use it to clear out material the rest of the way down. Understand that the whole trick to this stage is that you're trying to get a tap started into the frame threads. You're not trying to just jam a tap into a seized-together mass of frame thread and broken bolt. If you do, you may start cutting new threads overlaying the frame threads, which will tend to ruin them. The suggestion of a bottoming tap is because it's not tapered, so it may be easier to start with confidence. When it's an aluminum bolt, this part will tend to be easier, because any tap should clear it out easily.

Another thing you could consider is going to an M4 helicoil, if it's dubious whether you have the material for an M5. A steel M4 bolt is sufficient for a bottle cage, and this way you're not flirting with taking away too much material. It won't look like new though. To make this work you would be creating a new set of threads that overlay the old ones and hoping it would be strong enough, so it's last-ditch, but may be something to try as a bailout plan if you reach a point where the threads are ruined and you don't think there's enough material to enlarge the hole.

Note also that everywhere above where I talk about an M5 helicoil, you could substitute the plan of going to an M6 thread, since the hole size is close to the same. It's actually a little bit smaller, so perhaps there's a scenario where M6ing it is a better call. I kind of hate doing this to bikes, especially nice ones, but there may be a scenario where it's appropriate.

Not the answer you're looking for? Browse other questions tagged maintenance bolt or ask your own question.