Securing a Penny Farthing- HOW?

Penny-Farthings aren't cheap as anybody who owns one will attest to at £1,300+ for a UDC Penny-Farthing. So I'm keen to secure it from theft, especially since I'd need to be able to evidence that I made reasonable efforts to safeguard it, were it ever stolen for insurance purposes!

However, as a Penny-Farthing doesn't have a closed frame like a safety bicycle but rather a spine, the standard security chain solutions which require the chain to loop back on itself effectively reduce the chain length 50%. So by the time I run the chain through the forks and wheel, there's not enough slack to secure it to a fixed object! This leaves the thief free to toss my Penny Farthing into the back of a pickup truck where they remove the chain with an angle grinder at their leisure.

So conventional security chain solutions don't really work given the unique shape of a Penny-Farthing. Any ideas on how to secure a Penny Farthing?!?!?

What started out as a question on how to secure a Penny-Farthing has evolved through significant peer review (see comments) into a broader discussion of really a comparison of competing security options to protect expensive bikes- Penny-Farthings or otherwise. So somebody interested in securing their expensive street or mountain bike could benefit from reading this article.

This solution has been significantly peer-reviewed and I've updated the answer to incorporate the useful feedback in the comments from @Michael, @Criggie, @DanielRHicks (from his comments in the "Question" section"). Thanks to all who took the time to contribute to improve the quality of the answer; I'm most obliged.

The security is to prevent theft of the Penny-Farthing while garaged.

Solution: The Cinch or "Noose" Chain:

This chosen solution below uses a single chain "Kryptonite NEW YORK CINCH RING CHAIN 1213" to achieve the security design goals. Could be used when cycling, but at 10.55 lbs (4.79 kgs), you'd need to be a pretty sturdy person to lug it around ;-)

After being unable to both render the bike inoperable AND secure it to a fixed object using a standard security chain, I discovered the "noose" chain. Its' genius is that instead of using one BIG loop to chain both ends to a shackle, it allows you to create a "noose" around the wheel & spine/frame while creating a SECOND loop around the fixed object giving you the maximum possible effective useful length of the security chain. And this solution is extensible to ANY type of bicycle.

On one end of the chain is a large round link that allows the free-end to be fed through it. Now there's more slack to wrap the chain around a fixed object and then join the shackle to it.

A few illustrative pictures on how specifically to secure a UDC Penny-Farthing follow. However, a cyclist who uses a "safety" bicycle can also immediately see the benefits of the noose chain.

The model of chain depicted in the solution is: 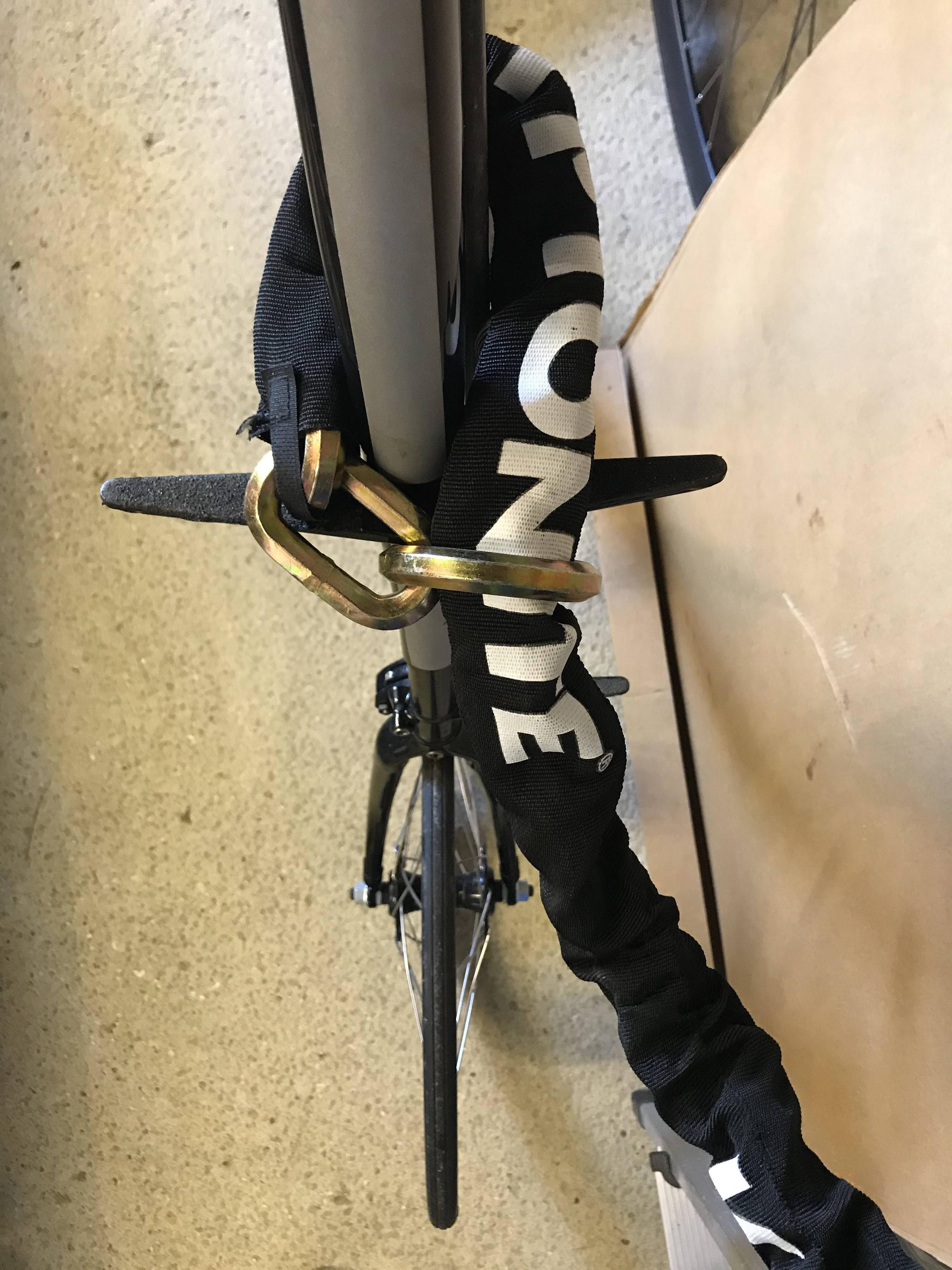 After "noosing" the front wheel to the spine/frame, run the free end of the chain around the fixed object. Ensure that you choke-up as much free slack between the cycle and the fixed object when joining the shackle: this prevents the thief from loosening the noose to slip it over the mount pegs. PLEASE NOTE: I know a movable ladder is not a great fixed object and only used for illustrative purposes. I'm not going to show how I secure things on the Internet. I also have a cameras with motion detection ;-) 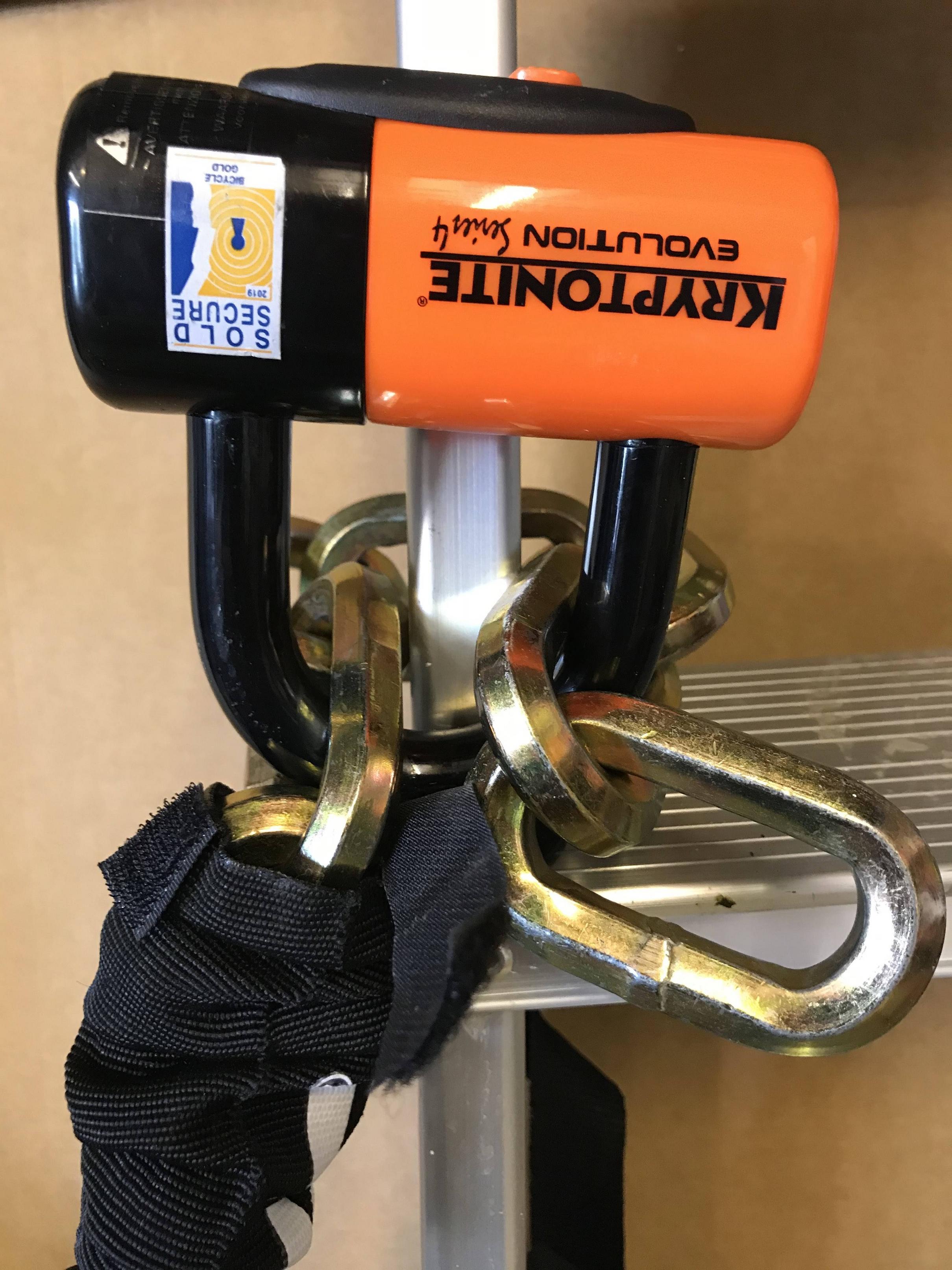 The Final System: Remark that the "noose" chain employs TWO loops ensuring you get the maximum effective chain length for your money! 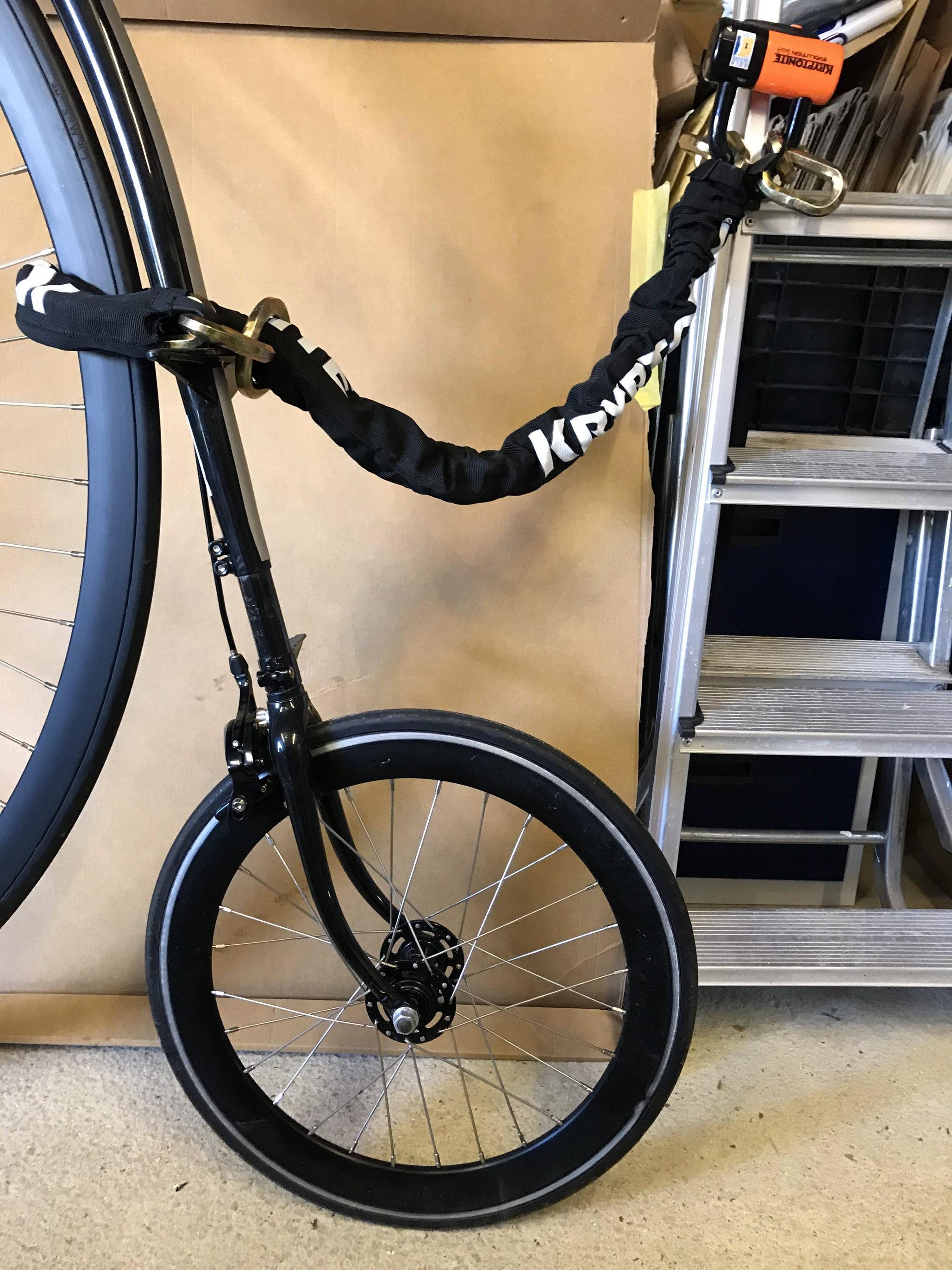 This chain is HEAVY. So not really very portable unless you're The Hulk. However, when toodling with friends on our Penny-Farthings, we tend to take them into pub gardens and "stack" them together next to the table, so they're never really unattended. I really just use the "noose" chain for when it's garaged.

I accept that given enough time and opportunity, ANY bike can be stolen. I'm merely trying to increase the level of difficulty to stealing an expensive bicycle. Anyway, after ages of racking my brain trying to secure my Penny-Farthing, hopefully this saves others the same grief.

This is ONE solution; I'd be keen to hear how others have solved this problem!

About the Security Designer:

Although a Linux & Network Engineer now, I served formerly as a New York City Police Officer. So I have some insight into how naughty people behave (or rather "misbehave"). And I cycled in New York City, where if one leaves their bike insecure it will be gone in the proverbial "New York Minute". Indeed, that's why Kryptonite brands their fiercest locks "*New York". BTW, I've never had my bicycle stolen living in Gotham which I consider quite an achievement ;-)

I would look for places on the frame that can't be disconnected easily, and lock to them.

From a web search, a UDC bike looks like this: 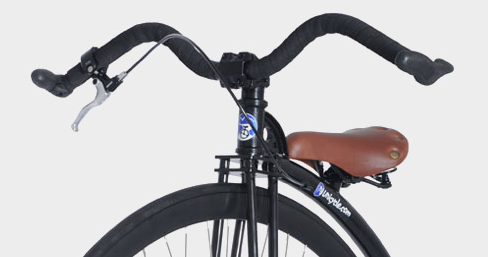 So there are through holes in the frame just forward of the saddle, and the fork is a very long triangle. Both offer locations for slipping a U lock through, though probably not a chain. 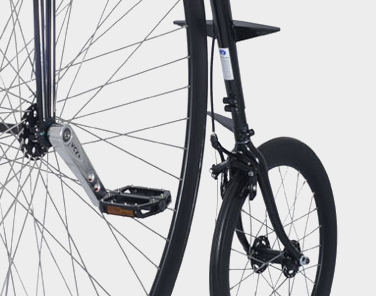 The cranks have holes, though these are likely 9/16" pedal mounting holes, and will be too small for even a U lock.

I notice the rear steps are reasonably large - it would be possible to drill a hole through one to connect the U lock. Again, a chain would need a bigger hole.

Last thought is to wind the chain through the main wheel, around the frame, and then lock it so there is insufficient slack to get the chain over the bars/saddle mount, and then down to a floor/wall shackle through the rear wheel. Downside, you've now needed TWO locks to secure the chain, which will have to be longer again to go the extra distance.

If you want decent longer chain that isn't bike-shop expensive, check out a dedicated chain supplier. They will have towing-rated chains for less than the bike shops.

Just for example: 8mm safety chain or 6/8/10/13mm rigging chain You might choose to add a cloth sleeve, or recycle some old MTB tubes to go over the top.

Not the answer you're looking for? Browse other questions tagged lock security penny-farthing or ask your own question.

5
Securing a bike trailer
19
How can I safely go downhill on an antique penny-farthing bike?
7
Proper Posture for Preventing Painful Posteriors on Penny-farthings?
19
Why the penny-farthing?
3
Securing bikes while on a car hitch mount
9
How do mini penny-farthings ride compared to regular size pfs?
7
Are there penny-farthings with an internally geared hub?
26
Are Penny-Farthings Legal to Ride on Public Roads (UK)